cars of Mirrodin previews have begun. As is tradition in Latest Developments, our first order of business today is to introduce the development team.

Mike Turian: If you've been around Magic for a while, you've played with Mike's work. Before Scars of Mirrodin, Mike led Future Sight, Morningtide, and Worldwake. Mike has great instincts for how to make cards exciting, and I learned a lot about that from him while I was on his Worldwake team. Mike is also a formidable Limited player. He is so formidable, in fact, that four of his five Pro Tour Sunday finishes came in Limited. That's the kind of thing that is liable to get you into the Pro Tour Hall of Fame, and that's exactly what it did for Mike. He even has his own Wikipedia page now!

Aaron Forsythe: Aaron is the Director of Magic R&D. He's been around for quite a while, and has done just about everything, from editing the website to leading design and development teams to writing Latest Developments to arguing about the Oracle wording of Kormus Bell. That makes him an excellent resource, as I have yet to present a question that he hasn't encountered before I did. Aaron doesn't make it out of his office to be involved in development and design as often as the rest of us, but he was the lead designer of both Magic 2010 and Magic 2011, and he led development for the set that follows Mirrodin Besieged.

Erik Lauer: While Erik was active on the Magic Pro Tour, he was a deck-building legend, producing several terrifying decks that he and his colleagues at Carnegie Mellon used to crush Pro Tour after Pro Tour. Inside Magic R&D, he is a development legend with an incredible streak of seats on development teams. He's been on every development team since Eventide, and the first time he will not have been part of the development team is Magic 2012. That's a pretty sick run. Erik also still puts his deck-building chops to work internally, and he is one of the more feared opponents in the Future Future League.

Matt Place: As Mark Rosewater mentioned earlier this week, Matt Place has moved on and now works for a different game company. Also as Mark mentioned earlier this week, Matt was a fantastic asset to Magic. I credit him with having much of the vision that pushed us to make Standard what it is today; it is a vision that I was originally skeptical of, but that has turned out fantastically. I am now a believer, and Matt's insights will not soon be forgotten. We wish him the best in his future endeavors, and it's clear that wherever he is, he'll be making great games.

Mark Purvis: Even if you're not a regular reader of Latest Developments, you've probably heard the previous four names before, but you may not recognize this one. This is because Mark Purvis is not a developer; he's a brand manager. Although we need developers to lead set development, we have found that a development team that contains only developers leads to making a set full of things that developers like. To fight this, we include people who aren't full-time developers on development teams. This can include designers or even people who have never worked on a Magic set development before. Mark is a busy guy, but he loves Magic and produced some fantastic Magic cards. I got to see Mark's work firsthand recently, as he was part of a splinter team I led during Mirrodin Besieged development. He's fantastic, and I look forward to having him involved in as many R&D projects as he can carve out time for.

At the time, there was a cycle of mana artifacts in the set to which Mark Rosewater had given the pet name "mocks". They each cost two mana, and they tapped for one mana of one of the five colors. These cards were doing some important work; easily accessible mana-acceleration was an important part of what made Mirrodin feel like Mirrodin, and the metalcraft ability word wanted you to have lots of artifacts. However, Mike's solution to the lack of small creatures was simple: replace the mocks with the Myr! 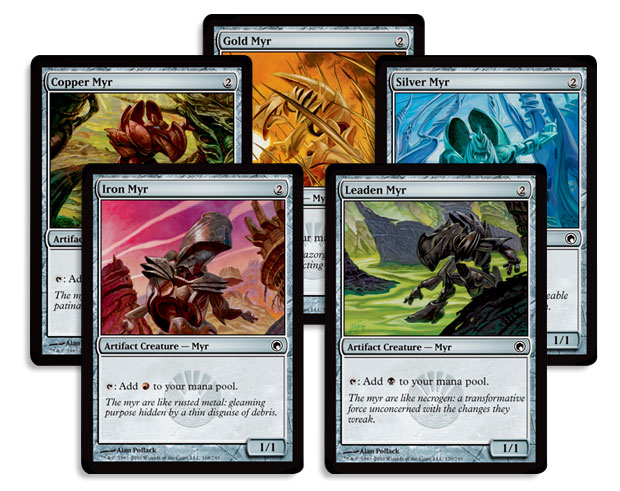 For me, the set jumped up several ticks in fun when the Myr were added. First, there were only so many "mocks" you could play before you were loading your deck up with expensive mana acceleration that would do nothing later in the game. The mana Myr, on the other hand, were cards that you were happy to play as many copies of as you got. This meant I could pack more artifacts in my deck to help with metalcraft, and it also meant that I could use my creature-removal spells to get my opponents off of metalcraft—as a surprise—more often. Finally, the Myr do a fantastic job of picking up equipment later in the game. Overall, the Myr were an enormous game play upgrade. On top of that, they were an excellent callback to the first Mirrodin block.

However, Scars of Mirrodin is not about callbacks. There are parts of Mirrodin that we didn't fully explore last time, and that means more Myr! For example, this one. 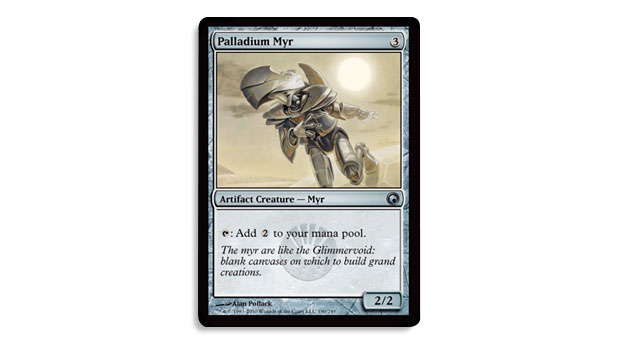 Palladium Myr is yet another simple and satisfying card. There's not a lot to say about this one. Just like the smaller mana-Myr, this card's power is subtle but considerable, and I expect its stock to be quite high by the time we're all done drafting the set.

Unfortunately for the Myr, Scars of Mirrodin isn't just about exploring Mirrodin further. There's a new, more sinister force afoot, and the Myr are not immune ... 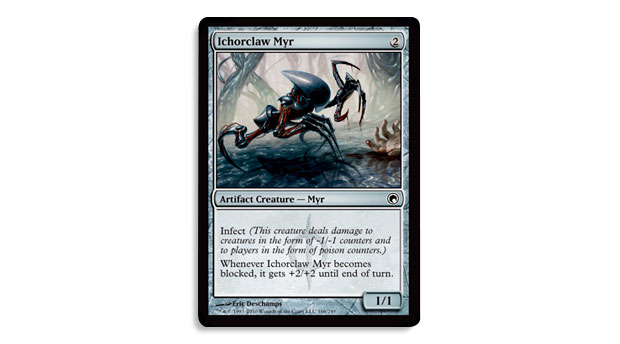 The Phyrexians don't often miss opportunities to turn adorable and huggable little things into depraved and terrifying monsters, and the Myr are no exception to this rule. I particularly enjoy the game play of this card. Like Vedalken Ghoul, you never really want to block this guy, as whatever creature you put in the way is going to be much worse for wear. Unlike Vedalken Ghoul, the clock it provides if you choose never to block it is twice as fast, and the penalty when you do block is steeper, which makes it strong enough to go in plenty of decks.

Where there are many cards of one creature type, there is often a lord to rule over them. Scars of Mirrodin is no exception. 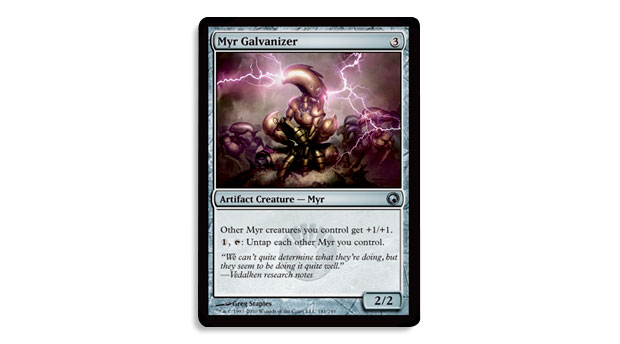 It was important to us that our Myr lord be true to the spirit of the other Myr. Myr are not vicious creatures; they are innocuous, and much of their power is tied up in tap abilities that may not look scary on the surface.

As many of you have pointed out, two of these combined with two mana-Myr means infinite mana. Developer Erik Lauer was the first to put this together in Limited. Unfortunately, he had nothing to do with the mana, so he died a turn or two later. The second time he put this infinite mana-Myr machine together, that was not the case. There is a combination of a common and an uncommon from Scars of Mirrodin that wins the game immediately if you have infinite blue mana, and conveniently, one of Erik's two mana-Myr was a Silver Myr.

Now that I've shown you some Myr, let me show you what happens when all the Myr get together and start having a little too much fun. 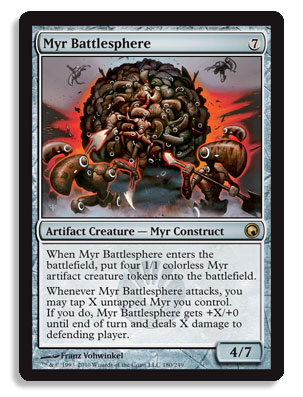 You choose the value for X when the last ability resolves. You can't choose a value for X that's greater than the number of Myr you tap.

You can tap Myr that haven't been under your control since your most recent turn began when the second ability resolves.

I will never forget the day that this card was made. There was a point in Scars of Mirrodin development where Mike decided that the set was short some rares in a few categories he identified. Aaron stepped up to create them, and led some small meetings with designers to make rares that filled the holes Mike had identified. Aaron left one of those meetings almost giddy, and he started describing the wacky card he had made to anyone and everyone who would listen. Aaron is quite a goofball when he's in that creative mode, and it didn't surprise me when the card he was excited about was just as much as a goofball as he was at the time. 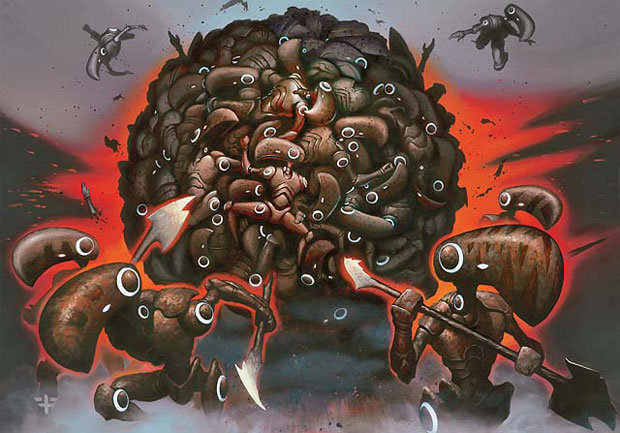 Although this card is quite a goofball, it's a blast to play with. There's something intrinsically appealing about a bunch of Myr getting together, making a crazy sphere, and rolling over your opponent. I got to do this more than most of my colleagues, as one of the Scars of Mirrodin Intro Packs is a Myr deck that contains this card. There's not a lot more satisfying than attacking with every Myr you have except for a Myr Galvanizer, using the Galvanizer to untap them all, and then tapping them all again to deal massive damage to the enemy. 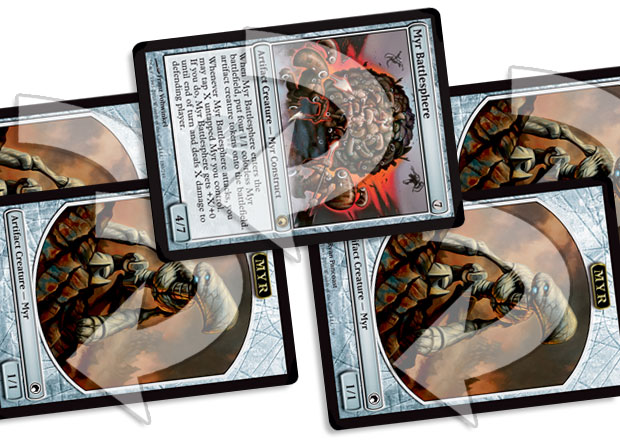 If you want to see a deck built using this Myr monster, go check out Noel DeCordova's From the Lab article!

Before I go, I'd like to let you know that I'll be previewing a card on Twitter next Wednesday. My Twitter account is @tomlapille. My card is even on theme for this article, as it is yet another Myr creature. Pay attention Wednesday morning, and you can be the first to know what it does!

My intent with this poll was to get a sense of how many people had built decks for Extended. We're excited about the way the Pro Tour in Amsterdam turned out, as the format has fewer card access problems than it used to, and our hope is that this makes it more playable at the local level. Several people who had not played in the Pro Tour asked R&D members at Champion Challenge in Amsterdam to play Extended, which we took as a good sign.