The Nature of Secrecy

Posted in Latest Developments on March 22, 2013

Dimir Week is coming to an end on DailyMTG.com, and instead of going over the mechanics of the guild (which Mark Rosewater covered well this Monday), I want to talk about the trait that the Dimir are perhaps best known for—secrecy. In my opinion, the most fun aspect of Magic: The Gathering is the battle of information both on the battlefield and off. Magic is a game that teaches you to make decisions and react with partial information, using a combination of past experiences, intuition, inference, and often a lucky guess. Whenever you play a close game, you know that you will have to make a few decisions that won't be perfect, and you will have to take a few risks (calculated or not) if you want to win. 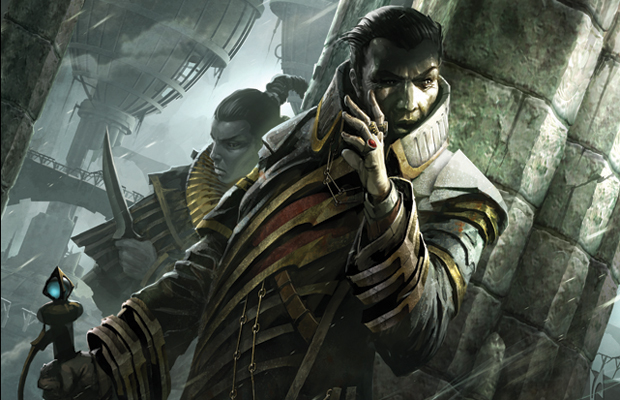 One of the most impressive parts of the Top 8 of Pro Tour Gatecrash to me was that a majority of games were decided not by one player making a huge error, or blind luck, but instead a player taking the wrong line in a situation with less-than-perfect information. It really highlighted the skill that was present at those tables, but also some of what makes Magic the exciting game that has kept me captivated for nearly twenty years now.

Why Information is Hidden

Magic was conceived as a game of hidden information, as opposed to a game like chess where all of the information to make every decision is on the board at all times. One of the major advantages of this type of game is that it helps to make the game play more deeply engaging by constantly rewarding the primal part of our brains that loves discovering new things, in much the same way that the randomness factors in Magic ensure that two decks can play each other over and over again and end up with totally different results. When you have a combat trick and attack your team into an opponent with cards in his or her hand, there is a lot that can happen, and trying to figure all of that out is part of the puzzle aspect of Magic that keeps players like me coming back time and time again.

In a development sense, hidden information is about more than just the contents of your hand—it's also about the contents of your deck. During the development process, we focus on ensuring the card pool contains the tools for diverse metagames in that deck contents vary enough to keep people guessing about what exact cards they have to worry about. Let's say, in the current Standard environment, your opponent plays a turn-one Temple Garden tapped. He or she could be on Bant Control, Naya Blitz, GW Humans, or even a Junk deck. That single point of data isn't enough to give you full information in terms of how to make your next play. Even when you know the general theme of your opponent's deck, you may not know the exact contents of the deck you are playing against until it's too late. You may think you are playing a traditional BGW Junk deck until your opponent discards Craterhoof Behemoth to Lotleth Troll and casts Unburial Rites. Suddenly, you went from being in a commanding position to staring down 40 trample damage. Gulp.

Going back to the first edition of Magic, the hidden information aspects of Magic were even stronger than they are today, due primarily to the lack of widespread Internet and both card lists and decklists. When the game was first published, Wizards underestimated just how much product people would open—a fact you might be able to divine by just how hard it was for Wizards to keep product in print for the game's first year. In those times, there was a very real possibility that every time you sat down to play a game of Magic you may have seen a card you had never seen before. Imagine seeing a card like Illusionary Mask or Armageddon for the first time. You might realistically have had no idea how to play against the card in question, and it could send you back to the drawing board with your deck, trying to figure out what your deck could include. In those early days, when you figured out a combo there was a good chance that your opponent may have never seen it before. While we may never be able to recreate that level of mystery again, we do at least enjoy fostering a baseline level through releasing new sets and encouraging metagames to not stagnate.

This wouldn't be a Dimir article if there wasn't a little bit of advantage to be gained with secrecy somewhere. While Magic is set up so there is a large amount of hidden information at any given time, there are always ways to use an inequity in that information to your advantage—a specialty of the Dimir. It could be as simple as using a Duress to nab an opponent's card, which generates the side benefit that when you attack you have better information than he or she does. The "grind" mechanic (milling to a land) can occasionally mill out an opponent, but cards like Balustrade Spy also live up to their names by improving your knowledge of what your opponent's deck contains during games one and two, and improve your idea of what could be in his or her hand or library as the match continues. Creatures like Bane Alley Broker obfuscate what cards are in your hand even after your opponent has seen it. This inequity can be even larger and take place in deck building.

Because of Magic's basic nature as a game of incomplete information, having full information for even one turn can put you at a huge strategic advantage over your opponent, whether or not you are at any kind of material advantage. If I've seen my opponent's hand and attack my 2/2 into my opponent's 2/2, he or she has to make a decision to to trade creatures or to try and play around a combat trick. As long as I am comfortable with trading, at the worst, there is basically no way I can lose in the combat. If I'm feeling bold, there are even scenarios where I can send my 2/2 to its certain death by the hands of my opponent's more useful 2/3, leveraging my current position of the player with complete information to sneak in a few points of damage.

Many players who enjoy building rogue decks do so because they get an inherent advantage in information inequality. Like players from Magic's long-ago past, they hope to surprise their opponents with interactions their opponents aren't expecting, meanwhile packing all kinds of heat for the most popular decks in the format in question. After all, players learn over time how to best deal with cards like Thragtusk, Geralf's Messenger, and Restoration Angel. The first time being confronted with Crypt Ghast may not raise large enough alarm bells, or the correct level of threat response, allowing the player who cast it to untap and cast a devastating Rakdos's Return or Griselbrand. This may well put Crypt Ghast on the opponent's future "kill-on-sight" list, but it accomplished its goal of getting a win through unfamiliar interactions.

Where there is an information war, some players will always have a desire to find the nuclear option. Alpha included Glasses of Urza as a way to help break through the fog of war. Okay, it included Mind Twist, too, if you want to really clear the way, but for now let's just look at the permanents that do this kind of effect. Glasses of Urza was never intended to be something that would be particularly powerful, it was just to give players who wanted the option the ability to do so. This led to other similar cards like Revelation and Zur's Weirding, which went even further in letting players prevent opponents from even drawing a card that might get them out of the situation. We printed cards like this for years, because it seemed like a thing to do, but we have generally stopped putting the effect on permanents. That isn't to say we won't print these kinds of effects again, but we do it sparingly.

Perhaps one of the most egregious cards in this camp, and one of the reasons we have moved away from this effect, was Wandering Eye in Nemesis. For those who don't remember the card (and I won't fault you for it), it was a 1/3 flier for

. Oh, and a common. Those stats are reasonable enough in Limited for it to see play in a lot of main decks, and the rarity meant a few copies would show up in about every draft. Wandering Eye had this nasty habit, you see, that whenever it hit the table, the game tended to grind to a screeching halt. Why? Because the amount of information both players had to process increased dramatically and made it so that there was a "correct" play each turn that players could find if they just crunched the available data hard enough. This all might have worked on a 3/1 flier, since at least it would draw the game closer to a conclusion, but Wandering Eye didn't even attack all that particularly well. In a Limited format not known for games ending in a timely fashion, Wandering Eye managed to drag out the games even further.

We tend to print this effect on one-time effects now to keep this from happening and because we just believe it is more fun. Vendilion Clique's ability is perhaps the perfect balance of this effect, where you can get a peek at your opponent's hand, get a leg up in the information war, but if you choose to have your opponent put a card on the bottom of his or her library, you are left once again with incomplete information. In this sense, "good" information is generally more interesting in a game sense than complete information. It completes the task of getting better information for a turn, but since that advantage is lost quickly, it tends not to slow down the game significantly.

Speaking of secrets, we have plenty more to reveal to you over the next few weeks as the Dragon's Maze preview seasons begins. What does the increasing unrest in Ravnica mean for the guilds? What is the Implicit Maze, and how does Jace Beleren fit into it all? Stay tuned to DailyMTG.com in the upcoming weeks to find out, and send your spies to PAX East this weekend to see what new information is revealed.

You won't be disappointed.

Posted in Latest Developments on March 22, 2013