News from the World of Magic

week I’m going to use my column to announce a couple of noteworthy items – two of the “Latest Developments” in the world of Magic, if you will.

Magic Invitational to be held at E3

The next Magic Invitational is going to be held at the 2004 Electronic Entertainment Exposition. “E3” is one of the most important conferences of the year within the computer game industry and that’s why we’re going to fly the best Magic players in the world to Los Angeles in May. We want to put them and their skills on display in front of the world’s collected computer gaming press. More importantly, we want to draw attention to Magic and Magic Online by showing off our community, our strategic depth, and our organized play system. Of course, there’s no better way to do this than to introduce reporters to people who have each won hundreds of thousands of dollars playing the game! 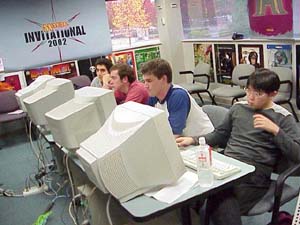 The last Invitational was held on Magic Online and it was quite successful. Thousands and thousands of Magic fans showed up online to watch the game’s biggest stars duke it out in Magic’s “All-Star game” (way more than we’ve ever had watching in the real world), and we’ve been planning ever since to hold the next one online too. Of course, if the Invitational games all happen on Magic Online, the players can get together just about anywhere in the world that you can set up 16 computers. The last one was held at WotC’s corporate headquarters near Seattle, which was convenient for us since we have our own computer lab, but there weren’t any live spectators (other than a few WotC employees) and there wasn’t any press at all. By setting up a LAN at E3 we get to have the best of both worlds – we get to have the games on Magic Online where the whole MTGO community can watch and we also get to have a real world event that will draw interest and attention from the computer gaming press.

There’s actually another twist to this announcement that we think makes things even better. E3 is happening from May 12 to May 14 in Los Angeles. Pro Tour San Diego is happening from May 14 to May 16 in San Diego. This means that we will fly all the Invitationalists into L.A. in time to play the preliminary rounds of the Invitational on Tuesday, Wednesday, and Thursday. Then we will put them all on a bus and ship them down to San Diego Thursday evening so they can play the Pro Tour on Friday, Saturday, and Sunday. Meanwhile the finals of the Invitational will actually happen at the Pro Tour. This should make the finals a much more exciting event than it has been in the past (and the Invitationalists wind up with what amounts to a free trip to a Pro Tour too).

Click here if you want to see the slate of invitees. It should be a fun one.

Mark Rosewater was recently promoted to Lead Designer for Magic. 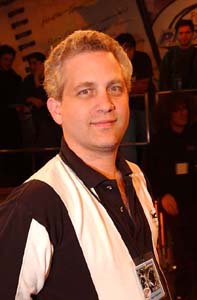 Bill Rose has been the Lead Designer for Magic for quite some time now. At the same time, however, Bill has managed to maintain a pretty low public profile. Other than popping up to win the Wizards Invitational earlier this year, most of you have probably never heard of him. The truth is that Bill (who was one of the original playtesters of Alpha) has been the final word on all things Magic for as long as I’ve been with the company. All those times you thought evil thoughts about Mark (or me, or anyone else that you may have thought was ultimately responsible for printing that one card that drives you crazy); you should probably have been blaming Bill. Since Mark has been one of the most prominent Wizards of the Coast employees for so long, it’s become almost a running joke inside R&D that the public already thinks Mark runs R&D, and I think Bill liked it that way.

Anyway, a couple of years ago Bill was promoted up to Vice President of all of R&D. R&D at Wizards of the Coast is actually much bigger than just Magic. We produce several other trading card games, including our new NeoPets game and a game called Duel Masters that has been #1 in Japan for a while now that we are really looking forward to bringing over to the U.S. market (plus there’s MLB Showdown, Star Wars, G.I. Joe, and a Simpsons TCG). In addition to trading card games, Wizards R&D also produces role-playing games (including but not limited to Dungeons & Dragons), the Avalon Hill line of strategy board games, and we’ve also got our hand in the miniatures business. My point with this paragraph is to demonstrate how much Bill has on his plate. He’s done a great job as Magic’s Lead Designer for many years, but he’s simply too busy and too important to the rest of the company to keep in daily contact with all things Magic. 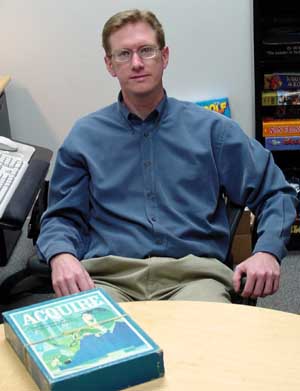 Shortly after Bill was made V.P. of R&D, I was promoted to be the Director of Magic R&D. I was already the Lead Developer for Magic (and I still am), but as Director of Magic R&D I also took over a lot of Bill’s former management responsibilities. However, I’m no designer and thus Bill kept control of Magic design. Of course, it makes a lot more sense to have the Lead Designer be a part of the Magic R&D team and I am truly delighted to welcome Mark onto my team and into that role. Mark’s passion for the game is unrivaled, and his talent as a designer is unquestionable. He’s earned this promotion and I’m really looking forward to seeing what he can do with the position.

Mark’s previous job was as a Senior Designer. He spent a good chunk of his time on Magic, but he was also involved in designing other games (like Duel Masters and the G.I. Joe TCG that we recently announced we will be releasing next year). With his new job responsibilities, Mark will be spending 100% of his time on Magic.

In addition to being in charge of Magic Design, Mark is also going to be in charge of Magic Creative (names, flavor text, look and feel, etc.). His experience and insights into that aspect of the game allowed us to set up a new structure for Magic R&D that should lead to a lot more synergy between flavor and mechanics. I think Mirrodin worked out really well and I think promoting Mark into his new role makes it more likely that we’ll get more Mirrodins in the future.

Of course, Magic R&D works pretty far ahead, and the design work for the first two sets of the Earth-Wind-and-Fire block is pretty much done at this point. Mark’s reign as Lead Designer begins in earnest with the Control-Alt-Delete block, so you’ll have to keep blaming Bill (and I) for anything you don’t like between now and then. After that, though, feel free to take aim at Mark. He’s “The Man” now …

Many of you have probably noticed by now that this week’s column did not include an explanation of the recent additions to the Type 1 Restricted List. That’s because this poll result spoke so loudly that (for the first time in two years) I made a suggestion for a magicthegathering.com Theme Week. I think those of you who are interested in Type 1 will be happy with it, and also with my next column.