Posted in Latest Developments on January 26, 2007 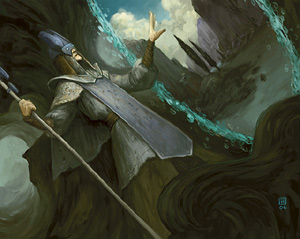 really, really like using mocked-up cards in this column for two reasons. The first is that it allows me to "say" just as much as a regular column does, but with significantly fewer words. I'd call that a bonus for both sides - fewer words means less typing for me and less reading for you, and getting the article content in graphical form has to be way cooler than by old-fashioned reading. The second reason is that, unlike what happens in design, the cards development deals with are much more "real." One altered decision here, one misevaluation or unconvincing argument or fit of paranoia there and any one of these cards could have ended up seeing print. And that feel of "What If?" - of potential alternate realities - fits right in with what Planar Chaos is doing.

This piece is a companion to my "Not Their Time" column back in October, which listed fifteen powerful cards that were considered for the Time Spiral timeshifted set but ultimately cut for a variety of development reasons. This time, I'm going to go over ten color-shifted cards that at one point or another were in the Planar Chaos file. Each of them was tested and deemed unworthy of printing for one reason or another. Check them out, and try to imagine "What If" each one was printed… how would the set - and Standard - look then? 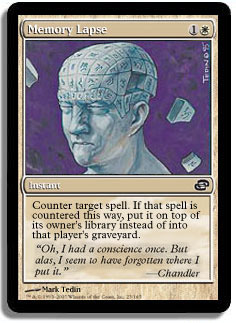 We'll start with this one because it is the card that Mark Rosewater used to illustrate the concept of the set to its eventual lead designer, Bill Rose. If you can accept a version of the color pie that has white as the "stalling" color (as damage prevention and creature tapping hint at), then Memory Lapse makes some sense in white. The spell it targets isn't countered in the truest sense of the word, but rather simply set back a full turn.

The card made it far enough into development to be sketched by Mark Tedin before we had to kill it. Memory Lapse was unremarkable in blue for a couple reasons: (1) Blue's counters are better than that typically, and (2) Memory Lapse is at its best when you are winning on the board, which blue rarely is. White, on the other hand, can take commanding leads with its quick creatures, follow them with a couple timely Memory Lapses, and the game was over.

While Memory Lapse probably isn't better than Remand in the abstract, it certainly is very similar, and it is way better than Remand in the late game when both players have a lot of mana. If you are losing on the board, then topdeck and try to play something inconsequential like a Llanowar Elves only to have it Memory Lapsed, you essentially were "Time Walked." Remand in that situation would simply cost you another green mana.

We switched Memory Lapse to Force Spike (Mana Tithe) at the end of development, hoping it would give us all the splash of a white counterspell (white is the taxing color after all) without all of the environmental ramifications. 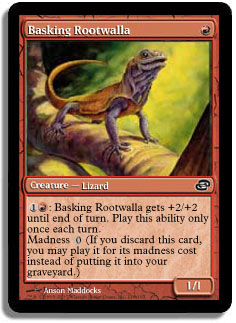 The design team certainly aimed high with a lot of their initial timeshifted choices. Basking Rootwalla saw (and still sees) play in just about every Constructed format it is/was legal in. Not only is it an incredibly efficient creature on its own, but madness

is quite ridiculous even without the top-tier enablers like Wild Mongrel around. We switched it to Arrogant Wurm (Reckless Wurm), again hoping for a more balanced power level from that slot with just as much excitement. 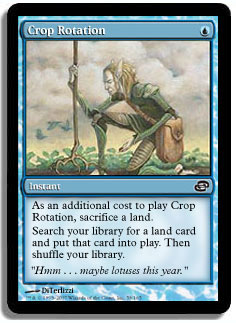 The Planar Chaos teams wanted to extend blue's "land changing" abilities past the scope of the illusory (like Phantasmal Terrain and Dream Thrush) and into more concrete metamorphosis. Crop Rotation is the poster card for land-upgrading; it is so good at its job that it is restricted in Vintage, where it used to fetch the game-winning Tolarian Academy quite often.

While Standard may feature no land on par with the legendary Academy, it also doesn't feature a restricted list, and does feature the overdone Urzatron (Urza's Mine, Urza's Power Plant, and Urza's Tower), which is often found in decks with blue mana. We had to say no to the power of Crop Rotation, instead bringing the land-changing theme to life with Dreamscape Artist. 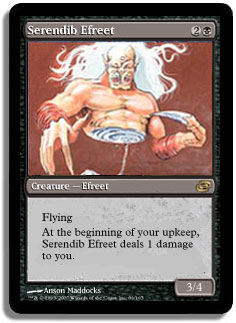 We tried bringing the original back in Time Spiral, and that didn't work. I'm not sure why we though putting it in a color whose creature are by default harder to kill was going to give us a different outcome, but it didn't.

It's interesting that Serendib's efficiency isn't lessened by the efficiency of the creatures around him now as opposed to the Arabian Nights/Revised days, but rather it is compounded. He would be the king of a killer curve of beaters, and with Bad Moon in play, not even Char/Psionic Blast could kill him. 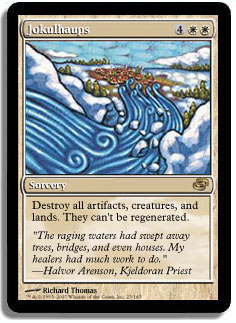 Giant board sweepers have fluctuated between red and white over the years, and to be honest, the text on Jokulhaups definitely feels more red than white (white cards of this ilk tend to destroy enchantments). I think this card was born of (1) the FFL's input that an expensive Armageddon might help shake up the environment and (2) the desire to reunite the once-devastating combo of Jokulhaups and Ivory Gargoyle in opposite colors (the latter was timeshifted into red as Molten Firebird).

Playtesting found that cards that wiped out the entire board - not just lands - were too good with suspend creatures, so we ditched Jokulhaups, which cleared the way for a more traditional "Armageddon" effect - Boom // Bust in red. And in Jokulhaups's place, we tried the following card… 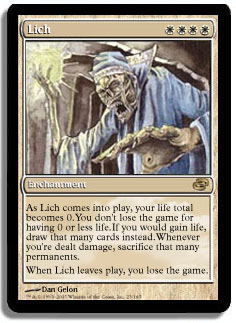 Read the crazy text of that card, then imagine the potential combination of it and a deck based around everyone's favorite 1/1 engine card, Martyr of Sands. In fact, that's just what playtester Paul Sottosanti did. His Martyr/Lich deck was capable of drawing upwards of forty cards in one swoop on some obscenely early turn, then turning those cards into a win with a flashed-back Conflagrate powered by several Simian Spirit Guides. Nice deck indeed!

Needless to say, Martyr of Sands is not a card we are trying to enable more than we already have, and Lich was eventually replaced with the much less abusable, but equally impressive, Drop of Honey (Porphyry Nodes). 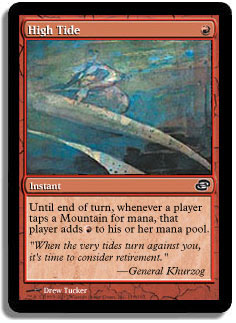 Speaking of not wanting to enable problems further… Can you imagine what storm decks could do with a red High Tide? Considering that just about every Dark Ritual/Seething Song variant we've printed over the years has been played in Constructed as a means to fuel storm-based shenanigans, and that the original High Tide went from junk Fallen Empires common to metagame-warping combo piece overnight several years ago, we decided to leave this one on the bench. 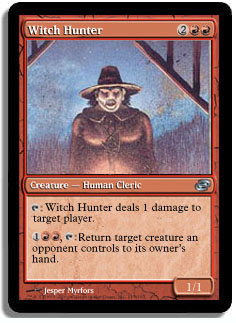 There is a cycle - and I mean that in the loosest possible way - of timeshifted Planar Chaos card that were also timeshifted Time Spiral cards: Malach of the Dawn (Ghost Ship), Piracy Charm (Funeral Charm), Dunerider Outlaw (Whirling Dervish), Prodigal Pyromancer (Prodigal Sorcerer), and Fa'adiyah Seer (Sindbad). I'm sure that "cycle" will trip up trivia buffs for years to come.

As an experiment, the teams tried having various numbers of cards appear in both sets as a way to draw very distinct parallels between the two worlds and themes. "Ah," you could imagine a player saying, "in the past this ability was [color A], but in alternate reality it is [color B]."

Witch Hunter was a neat card to try the experiment on. His two abilities (bouncing and pinging) would seem to point to blue as his color in Magic's past, but for some reason he was printed as a white card. With Planar Chaos moving the bouncing of opponent's creatures into red, and with normal Magic rightfully sliding pinging into red, Witch Hunter was a perfect fit into that color in Planar Chaos.

But the truth is, Witch Hunter gets old fast. He isn't particularly good; all of his value comes from his weirdness, and he gets a lot less weird the more (consecutive) times you print him. We limited the dual-timeshifted cards to five nonrares, and Witch Hunter didn't survive the pass. 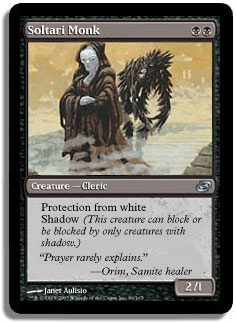 Blood Knight has been a huge hit from Planar Chaos, and we knew it would be when we made the card. The card you're looking at now has a lot of things in common with the Knight - two power for two mana in a color that doesn't normally get it, protection, and another ability that makes blocking difficult - so why didn't the new Monk make it?

The biggest reason is that shadow was put on hiatus for Planar Chaos because there just wasn't any space to devote to continuing Time Spiral's shadow theme. The mechanic is mentioned exactly once in the set, as part of Jodah's Avenger's suite of abilities. The second strike against the Monk was that Dauthi Slayer and Nether Traitor already occupy the two-mana aggro black shadow slot in the block. The third strike was that a black Whirling Dervish was needed to flesh out the cycle I mentioned in the previous entry, and the Dervish and Monk were too similar (both 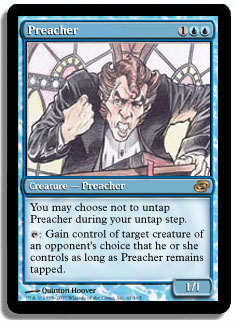 This card came the closest of the ten to seeing print. Its art was completed and now lives on the card Serendib Sorcerer, which eventually took its slot in the file.

Preacher is one of those cards that most of us incorrectly remember as "cool" when in actuality it was really, really obnoxious. Its power against creature decks that can't kill it is matched only by the frustration it generates. I can imagine tons and tons of casual games - and many competitive ones - being decided on the spot on turn three as the Preacher hits the table. We just don't like making those kinds of cards very often.

Preacher was helped out the door by the design team, who argued that stealing belonged in black in this set (Enslave, Treacherous Urge) and that the blue Preacher muddied the picture of the alternate color pie.

Sorceress Queen was the best and safest card we could find to timeshift that would match the already-completed art. We knew that the "sexiness" of the blue timeshifted cards in the set took a big hit when Preacher was removed, but we hope that Magic as a whole is better because of it.

Where are the green cards on this list? There aren't any. Green had the most well-defined identity coming out of design, and the best slate of potential timeshifts top to bottom. Ball Lightning (Groundbreaker) was a shoo-in from day one. Concentrate (Harmonize) met with packets of resistance, and required lots of testing, but it survived. Minor tweaks were made (for example, green Bad Moon became green Glorious Anthem - Gaea's Anthem), but as a whole green didn't have much flux.

The oddest green timeshifted card that didn't make it was Silver Erne. You probably need to click on that one.

Fascinating. We constantly argue in R&D about what various levels of complexity exist in the game and to what degree they can turn players off; hopefully this data will add some fuel to the fires.

Posted in Latest Developments on January 26, 2007