Out on the Township

ello, and welcome back to the second week of Innistrad previews. While I normally introduce the development team at the beginning of a set's previews, the story I told last week was just too big to leave any room for that. 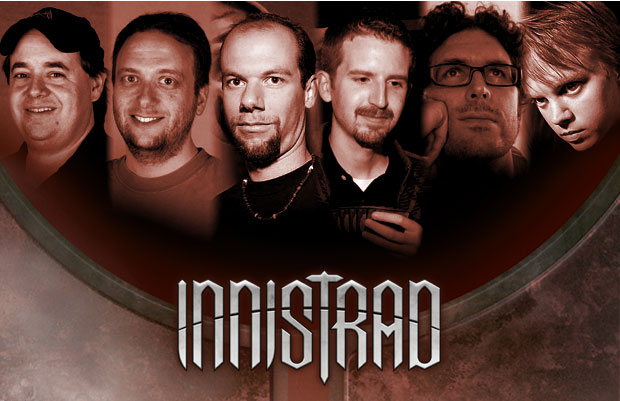 Erik has been on a lot of development teams. Although he was not on the Magic 2012 development team due to the time he needed to lead Innistrad, he was on every team from Eventide to New Phyrexia, a streak that no one else in R&D is even close to. He's also in charge of the Future Future League, led Mirrodin Besieged, Magic 2011, and Magic 2010, and is one of the most terrifyingly smart people I've ever met.

You may be familiar with Mark Gottlieb's name from his previous role as rules manager and archenemy to Mark Rosewater. While Mark's current job title is developer, neither his current title nor his previous one capture his design skills. There are lots of Innistrad cards with Mark's handprints all over them. While many of the rest of us are good at making clean cards that do exactly what we want them to, Mark is excellent at building dirty, texty, and crazy high-rarity cards that give exactly the right texture to a set.

Dave is currently the development manager in Magic R&D, but he's also an experienced trading card game developer. While he is new to Wizards of the Coast, having earned that experience at other game companies, he is a high-powered person to have on a team. The October release supplies the tone for everything else in the coming year, and we like to put all of our best people on that set, so Dave was an obvious choice.

Hey, that's me. I led the development of Magic 2012, Archenemy, Masters Edition III, and Masters Edition IV. I also write the column that you're reading right now. During Innistrad development, I spent a lot of time focus testing different implementations of the double-faced cards with players of all levels throughout the company. I also spent that time preparing to lead Dark Ascension, which releases in February. It's a little early to say any more about that, though, so let's just move on to...

Every large-set development team these days has a representative from the creative team, and Adam was ours this year. During early development, he was instrumental in telling us what things made sense in the world, what things didn't, and what elements of the world the creative team really wanted to be represented on particular cards. As development progressed, Adam's role lessened and he moved on to other projects, but he was instrumental early in the process.

While Ken has lots of experience being on product teams, he took a slightly different role on this team. Rather than be on the same page as everyone else, he chose to be the crazy idea guy, and usually had something wacky and slightly off the wall to pitch to us. Some of his ideas, like off-color flashback cards, made it right into the set. Others did not, but either way the set is better for the things that he brought to it.

Now to the story of today's preview card.

As a competitive Magic player, I find that interesting nonbasic lands are some of my favorite cards. While as a game designer I adore Magic's mana system and think it is absolutely wonderful that a third or more of any given Magic deck is just resources, the Spike inside of me loves to figure out how to get maximum value out of those land slots with cards that do other things. For example, one of my favorite Limited cards ever is Urza's Factory.

This kind of excitement exists in Constructed to an even greater degree. For example, check out the deck that Luis Scott-Vargas used to make Top 8 at Pro Tour Nagoya earlier this year.


Luis could have played 22 Plains instead of 18 Plains and 4 Inkmoth Nexus, but he felt that twenty white sources (don't forget the Mox Opals!) were plenty for him to cast all of his spells. He likely wanted twenty-four land so that he could cast four-mana cards like Hero of Bladehold, though, so he filled up the rest of the slots with a strong colorless land that did something else for him: Inkmoth Nexus. Also note that Luis has two copies of Contested War Zone in his sideboard; it is possible that as few as eighteen white sources would have been enough, but that playing those Contested War Zones in the main deck would have been too risky against other Tempered Steel decks. When he plays against a control deck, however, I wouldn't be surprised if two of those eighteen Plains leave the deck for the Contested War Zones before Game 2.

Let's take a trip back in time to the beginning of our internal Scars of Mirrodin Block Constructed testing. While the decks that made the Top 8 of Pro Tour Nagoya are better tuned than our decks were, we reached a very similar conclusion about Inkmoth Nexus. Namely, we decided that there basically weren't any decks we didn't want to play it in. While it's cool that we had a nonbasic land that was interesting enough to play in all these decks, all those Inkmoth Nexuses led to some unsatisfying game endings. It feels rather unnatural for a mono-red burn deck to get someone down to 7 life, run out of cards, then use three Inkmoth Nexuses to just poison them out, for example. However, because there just wasn't another land in the format that was compelling enough to play, that was happening over and over again.

We were frustrated with the lack of options. This caused Aaron Forsythe to create Phyrexia's Core to go with Ichor Wellspring, Mycosynth Wellspring, and Spine of Ish Sah. We found that package of cards to be more than strong enough to compete for deck space with Inkmoth Nexus, and that made us happy enough. Although none of the decks from the Pro Tour Nagoya Top 8 played this engine, lots of other decks in that tournament did play it. That says to me that the card did its job. 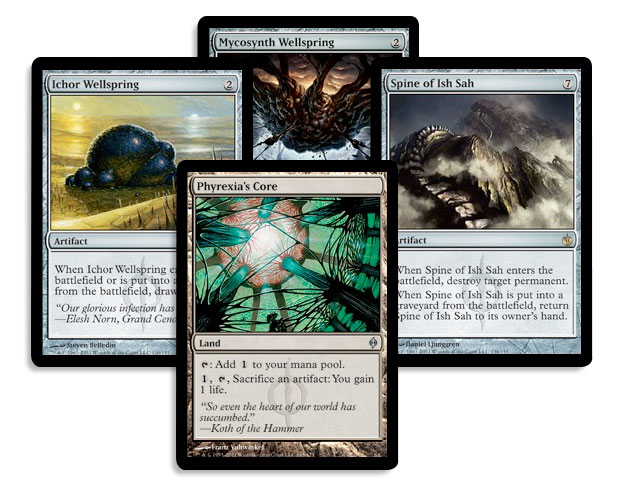 However, when we went back to Standard, Phyrexia's Core was nowhere to be seen, as Inkmoth Nexus was just so much stronger. Inkmoth Nexus's only competitor was Tectonic Edge, which was about to rotate out of Standard, plunging the format back into the endless Inkmoth Nexus wars that annoyed us so much in Block Constructed. What to do?

While Innistrad's design is inspired overall by top-down concerns, and tons of individual cards from the set are designed to be well-known fantasy tropes, not everything in a Magic set can be determined by setting and flavor. After all, we need the game to be fun once you start playing it too. After enough complaining about the Inkmoth Nexus problem, Erik decided to make some more colorless lands with interesting effects in Innistrad.

While Inkmoth Nexus was nearing ubiquity, it was mostly showing up in monocolored decks. It was so good in those decks, in fact, that making a land to try to compete directly with it seemed foolish. If it didn't work, we would have accomplished nothing, as Inkmoth Nexus would just cover up any evidence that our new card existed. Even if we succeeded, we might end up annoyed with the card's replacement for the same reasons. Instead, Erik decided to target two-color decks, which might not have space for all four copies of a colorless land thanks to needing plenty of mana of both colors, but would love to play one or two such lands.

Once we had our two-color target, we were back in the land of thematically guided decisions. We already had a tribe in each allied-color pair, and it seemed obvious to give each of those tribes a land. While designing them, all we did was try to make the land that a tribal deck would want. In Innistrad, someone playing lots of Zombies can always use more corpses to experiment on, someone playing lots of Werewolves wants something to do with unlimited amounts of mana that isn't a spell, and so on.

My preview card is the land we made for the humans. It's also my favorite of the five. 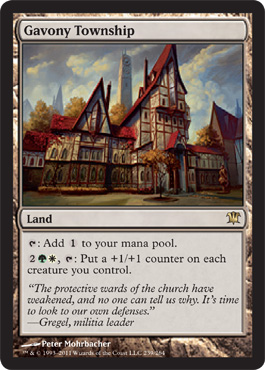 While we made this card for the Human tribe in Innistrad, it also fits naturally into many other decks. Any green-white deck that wants to start the game with Birds of Paradise or Llanowar Elves can use this card to get some serious late-game value out of its little mana creatures. A near-mono-white token deck can splash this off of some green dual lands. While it may seem strange for a mono-white or mono-green deck to splash a color just for a land—or for me to be excited about that—but as long as there is some diversity in the nonbasic land choices that deckbuilders are making in Standard, we feel like we've done our job. 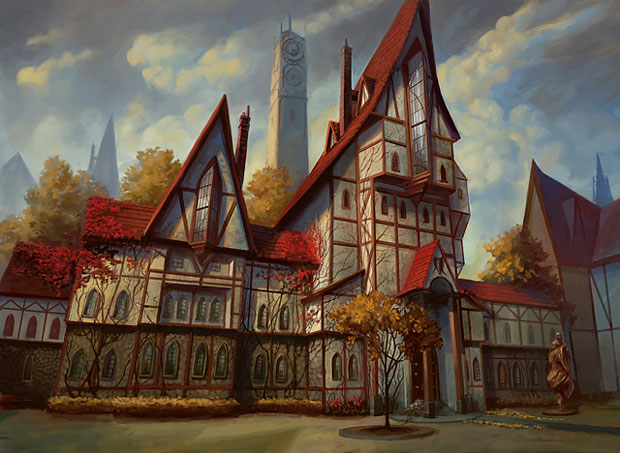 Of course, these aren't the only interesting nonbasic lands in Innistrad. With Tectonic Edge on its way out, we wanted to give players a land that could get rid of one of these activated lands in a pinch, although we didn't want it to be as strong as Tectonic Edge. It was a pleasant surprise to find a card with a name as perfect as Ghost Quarter that fit the bill perfectly. 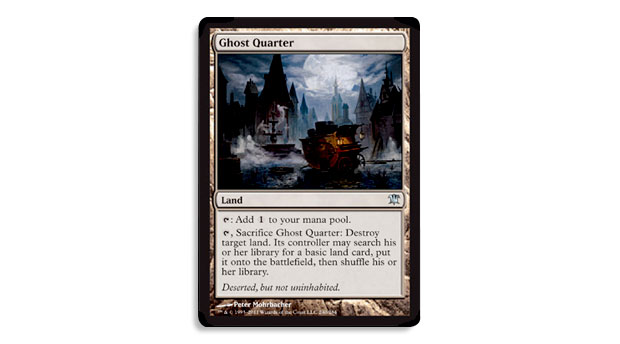 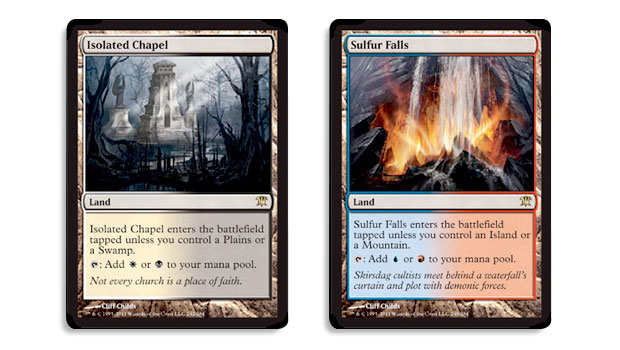 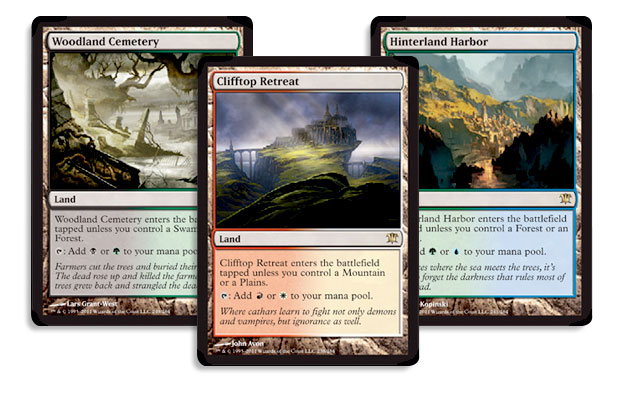 And that's not all! Innistrad also marks the triumphant return of a common five-color mana-fixing land from Magic's past that will be happy to help you pay off-color flashback costs like the one on Travel Preparations. 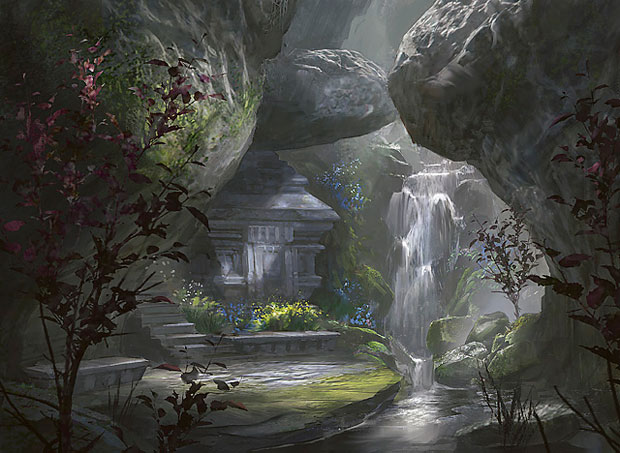 Come back on Monday for the last week of Innistrad preview cards, and I promise there will be even more exciting cards to look at. Some of them won't be lands!

In unrelated news, this Saturday is the date of Magic Celebration, a worldwide Magic event. There's even probably one at your local store. The format will be Magic 2012 Mini-Master (a.k.a. Pack Wars), and there's no cost to enter. That's basically a free booster pack!

Your Magic Celebration event will likely be attended by many players who have only played Duels of the Planeswalkers. We encourage you to be accommodating and friendly to them, as they could quickly change from people you saw once to people you see every Friday night. Having more Magic players is better for everyone, so please do your part to create a welcoming atmosphere.