“The Tempest set includes what I think is the worst Magic mechanic ever: shadow.”
--Randy Buehler, “Out of the Shadows,” magicthegathering.com, December 20, 2002

review what shadow cards—specifically the cards printed with the mechanic in Tempest block—have going against them in R&D terms:

That is a lot of negatives. Too many, for sure, for us to want to bring a mechanic back. I know—I tried during Betrayers of Kamigawa design and development. At the time, we were looking for a “ninja” mechanic, and shadow seemed like the perfect mix between mechanics and creative. Ninjas were sneaky, avoided fights, and caused all sorts of havoc, and having shadow creatures with saboteur abilities seemed like a nice execution of those elements. But alas, the people involved weren't into the idea, and the mechanic was shelved again—and it felt permanent.

We did show some restraint when choosing which mechanics to bring back in Time Spiral. We didn't choose anything that didn't appear “pre-card-face-change,” meaning no mechanics from Mirrodin forward (including equipment). We didn't choose anything that couldn't have reminder text written for it, which spelled doom for banding and phasing. And we deliberately left out mechanics that stepped on the toes of our newer offerings. If you've played around on the Orb of Insight, you probably have a good idea of what's coming back and what isn't. And if one of your favorite old mechanics isn't there—well, all I can say is this block has two more sets in it.

All this means that, despite Randy's best efforts to stop us, shadow is coming back. Most of the cards have similar qualities to the shadow creatures of yore—cheap costs, low stats, and some saboteur abilities. You'll have to trust us that we did a better job of balancing them this time—many of them are still Constructed quality, but we have better ways to interact with them. We tried to preserve the feeling of shadow, but not make their presence so oppressive such that interactivity goes away.

If you're going to take away interactivity, do it right… 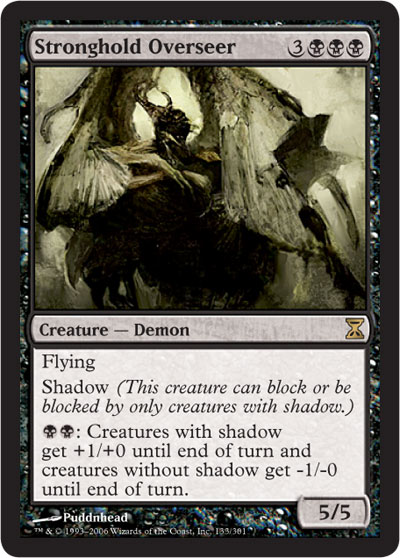 Yep, you read that right. Shadow and flying. How many creatures in the history of Magic have the ability to block this fellow straight up? I believe the answer is none, not even Mistform Ultimus, and that guy can do everything.

On top of that, he can pump up his own power—as well as any shadowy minions he may have—or shrink all the creatures foolish enough not to have shadow. Talk about a race-winner!

The overseer may be the next coming of Kokusho, at least in one-on-one play. He has the same stats for the same amount of mana, is far harder to block, and can keep you alive by neutralizing your opponent's creatures. In any event, he's a house in any format where he comes into play.

If shadow returning was a surprise to you, I'm sure a 5/5 flying shadow was even more of a surprise. And the best part is that this set is chock full of other cards just like that—cards that will make you drool, make your head spin… hopefully not at the same time, as that would be some kind of saliva lawn sprinkler, which sounds disgusting. Anyway… the prerelease is on September 23-24th!

It is, in fact, awesome. And it's the prerelease card for Time Spiral!

Mike was bored and made this up off the top of his head. My personal favorite? Magma Jet.