being “allies,” blue and black don't have too much in common. Just look at the other allied pairs. Blue and white excel at flying, toughness, stall tactics, and utility creatures. White and green both have good weenies, life gain, enchantment destruction, pump spells, and token generation. Green and red share mid-range bulky creatures plus artifact and land destruction. Red and black excel at creature destruction and aggressive creatures with drawbacks.

But black and blue? They seem to go well together, but they share little. Blue bounces, counters, and steals. Black does none of those things. Black kill creatures, makes opponents discard, and brings things back from the dead—all things blue never does. Black can sometimes emulate blue's card drawing via a life payment, and they both can summon decent mid-range fliers, but the obvious “shared space” is not really there.

That “lack of overlap” made finding an identity for House Dimir—Ravnica's blue-black guild—a little difficult. Only after writing down everything each color can do on a white board did the design team find the hook we were looking for.

Blue specializes in “milling” opponents, as indicated by cards like Traumatize and Dampen Thought. Black has recently acquired a type of “Jester's Cap” ability with Cranial Extraction—an ability that had been both black-blue (Lobotomy) and mono-blue (Extract, Rootwater Thief) in the past. Black has classically been the “tutor color,” with the Demonic, Vampiric, and Diabolic versions each seeing significant play. Blue is no slouch in the tutoring department either, as cards like Long-Term Plans and Gifts Ungiven show. What do all of these cards and mechanics have in common? They all affect libraries in some way, as opposed to cards in play or life totals. That was the angle we wanted to pursue—Dimir would be the “library” guild.

There is a strong “milling” theme spread throughout the guild, which takes care of affecting opponents' libraries. So when coming up with a mechanic, I wanted something that would use your own library somehow. Here's a card I submitted with my proposed mechanic:

Instant
Counter target spell unless its controller discards his or her hand.
Transmute

, Reveal this card from your hand: Put this card on top of your library, then search your library for a card with converted mana cost three, reveal it, put it into your hand, then shuffle your library.)

My proposed mechanic—transmute—would allow you, for a small cost, to exchange a card in your hand with the mechanic for any card in your library with the same converted mana cost. So you could turn Perplex into any three-mana spell for

. Blue cards with the mechanic would cost

to transmute, and black cards with it would cost

to transmute. The design team accepted it and put it on several cards. 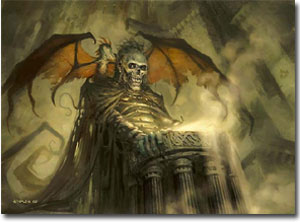 Development was not nearly as excited about the mechanic. Tutoring, historically, has been one of the strongest mechanics in the game, and many tutoring cards have been restricted or banned in several formats. Tutoring supports two big no-no's in development's eyes—repetitive game play and overpowered combo decks. There was talk of yanking the mechanic from the set entirely and starting from scratch.

I defended it, claiming it was in fact developable. There is a cost at which utility tutors like these are interesting, and a cost at which they are fair, and I argued that there was a happy medium somewhere. Tutoring is good for two things in my opinion. One is maximizing consistency. Say you had a deck that won most games that it put an early Phyrexian Arena into play. With a card like Perplex, if you didn't draw the Arena you could transmute for it on turn three and play it on turn four, greatly increasing the percentage of games wherein your key card had an impact. The other thing a tutor does is in some way the exact opposite of consistency—it affords you flexibility. With several transmute cards like Perplex in your deck, you could consider running single copies of situational cards like Slay, Threads of Disloyalty, or Long-Forgotten Gohei. While I can see the pitfalls associated with the former application of tutors, I am so enamored of the latter that I wanted to see this mechanic through. Of course, I had no doubts that tournament players would try to “break” the mechanic by using it to make dangerously consistent decks, but I could imagine many clever players having fun using the cards to enable nifty “toolbox” strategies.

The mechanic is in some ways similar to cycling—each card has a “primary” function with the option to use a “secondary” function if the first wouldn't be useful. Many cycling cards were essentially “sideboard” cards that could be played main deck—no one would run Disciple of Malice, Scrap, or Gilded Light if they didn't cycle. With room for only a few transmute cards in the set, I wasn't interested in that type of card. Instead I suggested spells in the vein of Miscalculation and Lay Waste—cards that would be useful on their own in most games assuming you drew them at the right time. Of course, as their usefulness lessens later in the game or in the wrong match-up, you can transmute them for something better.

Perplex is just such a card. Early in the game, it can be a backbreaker for your opponent, putting him in a lose-lose situation. Of course, as his hand dwindles as the game drags on, discarding stops being painful. At that point, Perplex is definitely better as a tutor.

Development hesitantly tried the mechanic out, and it proved interesting initially but way too good. My submitted version could be used any time you could play an instant, which meant control decks could easily tutor at the end of opponents' turns, or in response to spells to find the exact counterspell necessary. It also shuffled the transmuted card back into your library where it could be redrawn or tutored for later. On top of that, the gold cards were too cheap to use, costing only two mana to transmute.

Luckily those problems were fixable. Instead of shuffling back in, the cards were changed so that they were discarded as part of the cost. The power-level change there was miniscule, but it does help the mechanic be more “intuitive” to use—everyone that playtested it initially forgot to shuffle the cards back in; instead, they discarded them as if they were cycling or casting a spell. So that change made transmute simpler to use, if slightly less “flavorful.” The time at which you could transmute was restricted to when you could play a sorcery, bringing it in line with most of our more recent tutors. And the mana cost to use the ability was raised slightly to 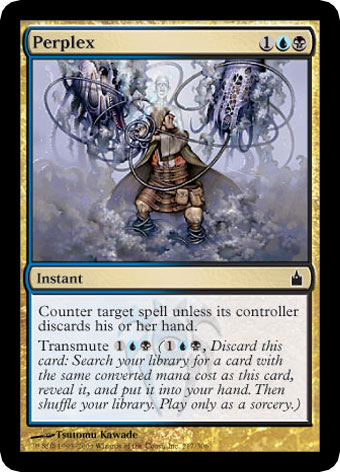 As a developer, it pleases me greatly that we were able to massage the mechanic to find the right spot where it was printable and useful. But as a designer, I'm positively tickled that the creative team not only kept my initial name for the mechanic, but for the card itself!

Playing transmute in constructed shouldn't be too mentally taxing—as you put your deck together, you'll know what tutors you have and what they can get. But in limited play the mechanic requires a little more pre-planning. If you have transmute cards in your sealed or draft deck, it will behoove you to pay close attention to the mana costs of the other cards in your deck. Granted, this will be difficult at the prerelease when all the cards are unfamiliar, but knowing what transmute “targets” you have could mean the difference between winning and losing. If you activate the transmute ability and have nothing left in your deck to get, you're simply out a card! Beware! Flexibility has its risks!

Blue-black is one of the most popular color combinations in the game, and I believe transmute captures the essence of the pair elegantly. Hopefully all you fans of Psychatog, Recoil, and Doomsday Specter will find some nifty things to do with it and all the sinister Dimir cards in Ravnica. See you at the prerelease!

I'm happy most of you are neutral to the changes at the very least. I'm hopeful the format will bear out our decisions to ban the two cards.