Places to Go and Things to Do

Posted in Latest Developments on October 2, 2009

endikar is a world full of places to go ...

... and even things to become.

These cards went through many iterations during Zendikar development. Today, I'll talk about the journey they went through to make it to print. 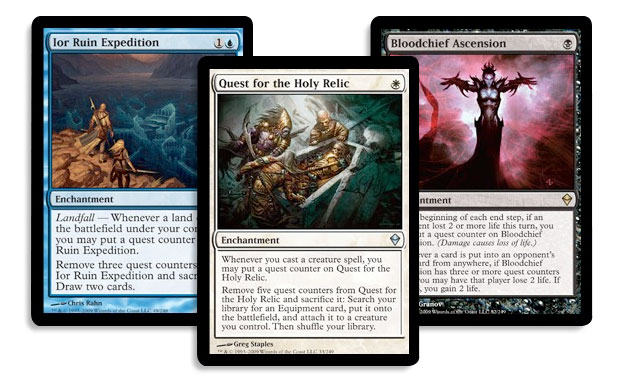 In his second Zendikar preview article, Mark Rosewater wrote about artifacts called "maps" that he and his team created during design. These cards represented literal maps that guided you on a journey to something, but to get to the end of the map you needed certain kinds of equipment or hired help. These cards struggled to convey the correct flavor and did not play as well as the development team hoped they would, so like the first trap design, they were cut from the set entirely.

The solution for the "maps" had two parts. The first was to change them from artifacts to enchantments. This solved the color-pie issues that using artifacts created. Without something to tie a map to a color, one could choose the best maps and play only those, and it was difficult to do any color-specific effects. The last version of maps included a basic land of the appropriate color in the list of requirements for receiving the reward, but this was clunky. Making the "maps" into "quests" that were enchantments let us use the mana cost to require a particular color in a clean way. We knew it would be slightly odd that a quest could be removed with a Demystify, but enchantments are the only existing type that is by default a colored permanent and is not a creature, and we didn't want to introduce an entirely new card type.

The other part of the solution was to require one action to be taken repeatedly rather than use a long list of different single requirements. Each time the action was taken, we would put a counter on the quest, and the quest was complete when there were enough counters on it.

Most of Zendikar's quests were designed by a vigilante design team that consisted of Greg Marques, Matt Place, Mark Rosewater, and myself. We discovered that it is remarkably easy to to make a card using this template. There are lots of game actions in Magic that a quest could ask a player to take, and there are also plenty of effects that a quest could use to reward a player for completing a mission. However, finding pairs of missions and rewards that made sense as concepts was challenging. For example, have a look at this card:

This card technically fits the criteria laid out above, but it doesn't make any sense as a quest. What does gaining life represent? Why does gaining life give me the ability to cast Cone of Flame? This is a pile of words, not a quest. We designed the first quests in two one-hour meetings, and most of our time was spent making sure that our requirements and rewards felt connected. The development team embraced this idea, and they made sure that the quests made it to print feeling connected as entire cards.

However, developers being who they are, our cards hardly went unchanged during development. Our handoff to the developers contained the cycle of Ascensions, which we indicated were supposed to be a rare cycle. However, we did not mark the rest of the cards with rarities, assuming that the development team would put them where they wanted.

Inspired by our rare cycle, the development team chose to also include uncommon and common cycles of quests. They used cards from our handoff to create the uncommon cycle, but none of our cards were simple enough to be commons. Furthermore, the development team wanted the trigger for adding a quest counter to be the same on all five common quests, and they wanted the number of quest counters required to complete the quest to be the same.

However, the design team never received a request to design these quests, because in the development meetings they discovered a condition that was already on all five colors at common: landfall! A few of us from the quest vigilante design team were skeptical that this would lead to coherent quests, but the creative team observed that playing a land was a lot like exploring a new place, and we were told that these cards could be concepted as expeditions. This worked for us.

It is a designer's job to hand off things that have the potential to be fun, and the developer's job to massage them into a final form that can be played with. Often, designers hand off cards they like and must watch as developers make them slightly worse over time. This is the opposite of what happened with the Zendikar quests. The more we played with them, the more we discovered how difficult it was to complete quests over multiple turns. We also discovered how bad it was to draw a quest later in the game. Because of these discoveries, those of us on the quest team got to watch our cards constantly get better. Almost all of the quests we submitted became less expensive, were changed to require fewer quest counters for completion, or had the reward powered up. This was unexpected, but fun to watch.

I was not on the Zendikar development team, so the watching that I got to do was through the Multiverse comment records. Rather than tell you the story through my own words, I'm going to put you in my shoes by showing you mostly unedited Multiverse fields from the five uncommon quests, with a little commentary inserted.

Quest for the Holy Relic

At the time this card cost

, but what better way than to start the game with this on turn one? It felt terrible to play a one-cost creature before this on turn two, because that was one fewer quest counter.

KEN 12/10/2008: Interestingly, everyone wants this to be what Godo does (auto-attach).
AF 12/8: Now puts the Equipment into play attached to something.

It appears that we have found another instance of Aaron time traveling in Multiverse. I wasn't sure what to make of this in The Core of the Multiverse, Part I, but now it's clear that Aaron is a very powerful man in ways that none of us fully understand. We should all be glad that Aaron uses his powers for making a game and not some other nefarious end.

Success! If you ever find yourself in Magic R&D and make a Multiverse comment that seems like it has been ignored, do not fear. Developers constantly comb their files for comments, so your comment has definitely been read and almost certainly been thought seriously about. It took two months for my first comment in this file to be addressed, but it still happened.

The only thing that changed about this card was the mana cost. It did not test too powerfully at one mana, so we left it there.

Quest for the Gravelord

Here, EXO is Dylan "Exobyte" Mayo, who used to work on Wizards digital games. When comments like this are flying around, it's almost certain that the card in question will improve the next time the development team makes a full card file pass.

TML 11/24/2008: I don't get why only my opponent's dead creatures work when I am trying to make a monstrosity. That is bizarre flavor for creepy necromancy. This also gets much more appealing when I can use my own dead dudes.

The version of this card that was in the file when this comment was made gained quest counters only when your opponent's creature died. This is not how we handed off the card to development. If you were a creepy necromancer, would you care where the dead creature you were going to use for parts came from? I sure wouldn't!

If I remember correctly, the previous version cost

and required the deaths of five creatures, all of which needed to come from the opponent. Aaron isn't kidding here.

TML 12/10/2008: Strongly prefer doing a creature card going to any graveyard for flavor reasons.
AF 1/4: Should it exile all creature cards in all gys for flavor? Also, Necropotence-Titan sounds like EVL's new favorite game.

At the time, the playtest name of this card was "Quest for the Necropotence-Titan." Developer Erik Lauer uses the initials EVL in multiverse, and is famous both for his love of the card Necropotence and for his skill at the game Titan.

TML 1/6/2009: The above is my new favorite Multiverse comment.
AF 1/26: This card got way better (again). Now any three dead creatures trigger it.

Success! Once again, my comment is addressed after a two-month delay. Also, the card got better again. Cool!

Designers often use language like "Double all damage your spells and abilities would deal this turn." This is an easy way for us to talk about cards, but it doesn't line up with the words we actually need to use to make Magic's rules work. Sometimes we become sad when our loose language is replaced with precise language.

This discovery made my day. I really enjoy the level of snark that Aaron used in Multiverse during Zendikar development. The rest of us picked up on that, and in hindsight, the Zendikar Multiverse file is the funniest one I've seen in my time here.

"Chessiness" here refers to on-board complexity. Imagine that I control an enchantment that says "Sacrifice CARDNAME: Divide four +1/+1 counters among up to four target creatures." I attack you with a 5/5, a 4/4, a 3/3, a 2/2, and a 1/1. You also control a 5/5, 4/4, 3/3, 2/2, and 1/1. Even if neither of us have cards in hand and none of the creatures have relevant abilities, how are you supposed to block? This is a very difficult question, and even if you do find a good answer, it probably takes you a long time to find it. We don’t like inflicting difficulty of this magnitude on players because Magic has plenty of complexity in it without these kinds of situations, and the complexity that Magic already offers is more fun than situations like this.

As you can see by comparing the printed card to the comments, this card was later changed to give the counters to only one target. However, this change was not accompanied by a Multiverse comment. Either way, I'm happy.

I had a blast at the Regional Prerelease in Phoenix this past weekend. Thanks to everyone I met, and to the folks at Cascade Games for making my trip go smoothly!

Posted in Latest Developments on October 2, 2009