his is Aura Week. Auras are a big topic, and I had more ideas than I could fit into one article. Here are three of them!

Magic's first sets are now known as Limited Edition Alpha and Limited Edition Beta. When they released, however, there was no need to come up with special names for them, as they were the only sets that existed!

Magic players' love affair with Auras started almost immediately when Magic came out. Legos are a popular children's toy, and one of the important reasons why is that they are quite modular. Although they often come packaged with directions on how to make one particular thing out of them, once you're bored with that, you can disassemble it and make something that no one else in the world has made. Auras are just like that. Serra Angels are a dime a dozen, but what about Serra Angels with Green Ward, Lance, and Blessing on them? That's a Serra Angel you can call your own. 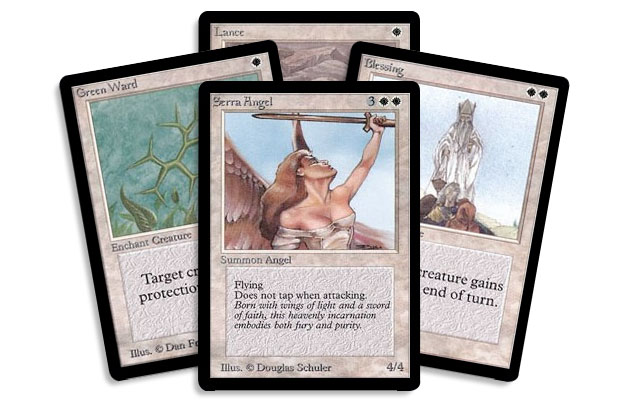 In a conversation about Auras earlier this week, however, Magic designer Ken Nagle proposed another factor that contributed to Auras' popularity early in Magic's history. Let's go back to Beta for a moment. Let's say you wanted to make a white deck. What creatures could you include? If you look in Gatherer to find out, you will discover that this is a very different question today than it was when Magic was young. In today's Standard alone, there are 111 mono-white creatures to choose from. In Beta, there are only eleven. They are as follows:

Let's suppose that in general, Magic decks are built to win games. Given that, which of these cards can we actually rely on to put a game away? Only Northern Paladin, Personal Incarnation, and Serra Angel have three or more power and can attack, so our options are quite limited. Northern Paladin is small compared to green creatures, and might just end up trading with a Hill Giant. Personal Incarnation is better, but green can still reach it with a Craw Wurm. Serra Angel is about the only thing that works consistently, and that explains why it was so loved early on. Even more amusingly, it was printed at uncommon, but because of how powerful it was, many players believed it to be a rare.

What does this have to do with Auras' popularity? Well, quite a lot. Have a look at Mesa Pegasus, Holy Strength, and Blessing.

In a world where only three of white's creatures in the whole game have three or more power, Auras become much more appealing. Mesa Pegasus, for example, is a dinky little 1/1 flyer. Putting a Holy Strength on it, however, turns it into a 2/3 flyer, which was much more exciting. You just couldn't get a 2/3 flying creature for three mana on one card, so the Holy Strength felt like you were cheating. Now imagine a Blessing on that Mesa Pegasus instead. With enough Plains, you could kill an opponent in as little as three turns with that combination! This power is, of course, why Blessing was a rare. It just wouldn't do to have that kind of speedy player-killing end game after game, now would it?

We make creatures stronger now than they were in Beta. It is pretty lame when none of the creatures involved in a game of Magic can actually bring it to a close, so we don't make the game like that anymore.

The design intent behind Future Sight was that it would show many windows into possible futures for Magic. From different card frames to one-off keyword mechanics to enchantments that have no effect while they are on the battlefield, Future Sight used strange lines of text to make its point about the future of Magic. This produced several interesting cards, but it also produced several Auras that now make me scratch my head in confusion when I look back at them. Here are the worst offenders.

Enchantments that tap are strange to me as a player. Witch's Mist and Second Wind, also from Future Sight, bother me much less. Witch's Mist is intended to be used once per turn, and tapping is a convenient way to express that. Second Wind's ability both costs and produces a tapping-related effect, so it feels connected to me. Flowstone Embrace, however, has no reason to require a tap. It could just say "Enchanted creature gets +2/-2", and most of its functionality would be the same. It would also be less confusing to players who don't know that an enchantment on a creature doesn't tap when the creature does!

This card's effect is mechanically comprehensible, as the three lines of text on it are each rather simple. However, it's pretty strange as an overall package. Giving a creature +3/+3 is the kind of thing that you might want to do to your own creature, but keeping a creature from untapping is something you're supposed to do to an opponent's creature, so what are you supposed to do with this? Strong Limited players used it mostly to lock down their opponent's creatures or make a defending creature bigger as a surprise, but I recall many of my opponents in Drafts at my local store being so confused by the purpose of this card that they did their best to not pick it. That, to me, is a sign that a card didn't work out right.

This card reads to me like a horrible trap. It wouldn't have suspend if you weren't supposed to suspend it, but there are so many ways it can go wrong if you do suspend it. If you suspend it on turn one, and anything happens to your turn two creature, this doesn't work out. If you suspend it with several creatures out, your opponent will know exactly when you're going to cast it, and can save an instant removal spell for when that will happen. It exacerbates all of the things that make Auras risky, and that seems like a silly thing for an Aura to do. When I played this card, I always ended up just casting it for three mana.

One of the big problems that experienced Magic players have with Auras is that they invite card disadvantage. In Magic 2010 Limited, when someone Doom Bladed your Centaur Courser that had an Oakenform on it, you're down two cards while your opponent was only down one. If you let that happen to yourself too many times in a game, you'd find yourself completely out of cards while your opponent still has some, and those cards might end up killing you. This was one of the earliest important Magic theory discoveries back in the mid 1990s, and Auras were one of the first things to get caught in the crossfire of negative publicity. 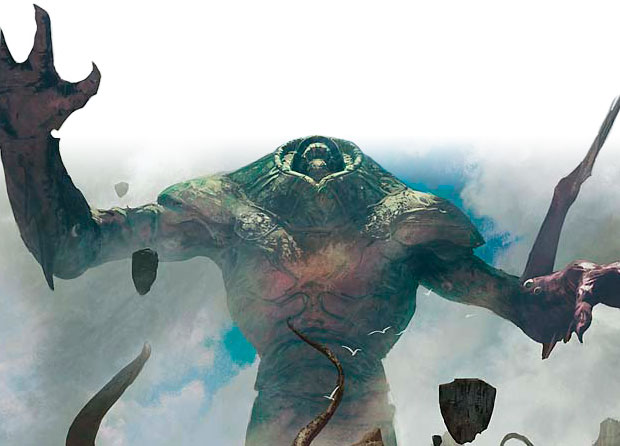 Brian Tinsman was the lead designer of Rise of the Eldrazi. The idea for the entire set came from one observation. Big creatures are very appealing to new Magic players. Experienced Magic players often learn about the several problems that big creatures have in practice and adjust their preferences to match, but the fact that less experienced players like them so much suggests that they are just intrinsically fun. This caused Brian to wonder if it those experienced players would enjoy Magic more if big creatures were actually powerful and correct. The result was a Limited format where there was a common 8/8 for eight mana that could reasonably be first-picked in Draft.

Late in design, there was some concern that there wasn't enough diversity of play in the set, and Rise of the Eldrazi lead developer Matt Place asked Brian and his team to investigate adding another keyword mechanic. To find it, Brian took the same logic about big creatures and looked for other places to apply it. As I've already discussed, Auras have tons of basic appeal to new Magic players. Building stuff is fun, and making a big creature out of different pieces scratches that itch in a way that other Magic cards don't. What if, Brian thought, he could make seasoned players free to experience that fun again without feeling guilty? The result was the totem armor mechanic. Matt liked the idea, so it went into the set. 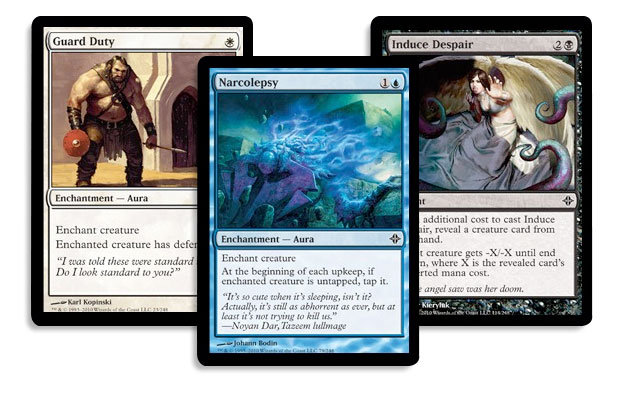 Developers like appealing mechanics, so we were excited about totem armor. However, developers also like it when players have access to answers to anything a format can throw at them. It's no fun at all to lose to something over and over again, go searching for something to deal with it, and fail to find anything. There are plenty of removal spells in Rise of the Eldrazi that totem armor Auras protect against, like Flame Slash, Corpsehatch, and Leaf Arrow. However, there are also cards like Guard Duty, Narcolepsy, and Induce Despair that can deal with a totem armored creature. 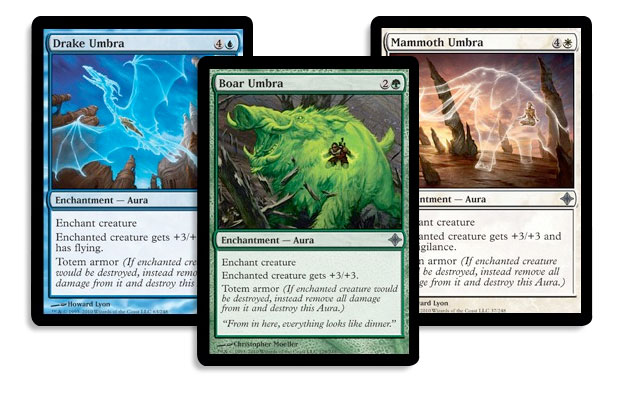 While I spoke and played with players at Pro Tour–San Juan last month, it seemed that Brian's design intent had been mostly realized. Several pro players were quick to point out the drawbacks of totem armor Auras when I talked to them; they pointed to the cards I mentioned above as things that still dealt with a totem armored creature, and reminded me that instant-speed removal can kill the intended recipient of a totem armor Aura before it resolves. While these things are all true, actions speak louder than words. I watched several Pro Tour players first pick Drake Umbra, Boar Umbra, and Mammoth Umbra, and I also saw many players playing Hyena Umbra and Spider Umbra to protect their levelers. Overall, I would consider this to be a success.

If you want to see the results of the other three polls, check out the Core Set Survivor Arcana from Wednesday.