Posted in Latest Developments on December 5, 2008

n this article I'm going to go over some of the back story of Jund. I will talk about how it changed its major mechanic twice during development and reveal some of the comments we made to shed some light on why we did what we did.

Before I do that, though, I want to give a little back story on some of the people who helped design and develop Jund. I was digging around for information on some of the R&D members and I happened upon their character sheets. I thought I would share them with you. Before I do I want to make it clear that this information is real, or at least was when it was recorded, and not just a silly but genius excuse for me to make fun of my co-workers ....

And now on to the serious part of this article ....

During the development of Shards of Alara, some of the largest fluctuation was in the Jund shard (or bRg house, as we referred to it at the time). The first mechanic it had was also the mechanic it ended with, devour. But it went on a round trip through Grixis's mechanic to get there.

Jund's first mechanic was "prey," the playtest name for devour. Since it was what we decided to go with in the end, why didn't we just keep it from the beginning? That is partly my fault. I was strongly against devour being the Jund mechanic. I felt that while the mechanic made for a few strong designs it wasn't interesting on eight or more cards. In addition I didn't believe there were enough players out there that wanted to sacrifice their creatures to make big guys that it justified being a shard mechanic. I wanted us to do the mechanic on a few rares and find something different for Jund.

I liked the card Predator Dragon; it was fun exciting and well worth feeding my creatures to. But how many Predator Dragon–type cards would people need? I figured that even the players that loved devour would only be running a few creatures with the ability. The rest of their deck needed to be full of food to make the devour creatures work.

For awhile I got my way. All but a few devour cards were booted from the set and the ones we kept lost their keyword. Jund was now mechanicless ....

Grixis Loses its Mechanic to Jund 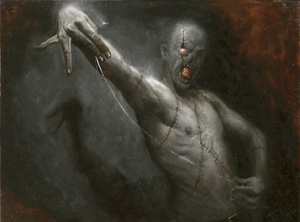 At the time Grixis's mechanic was called "carnage." Carnage was an ability word that basically meant "Whenever another creature goes to the graveyard from play, trigger my carnage ability." The flavor of this mechanic obviously worked well for Grixis, but we weren't happy with the way it played in blue.

One example of a blue carnage card we didn't like was the predecessor to Fatestitcher. This was a creature that let you tap a creature when a creature died. It played poorly because you often were tapping creatures after creatures died during your attack which is fairly pointless, since your opponent is about to untap.

Another reason it didn't fit blue was because the mechanic wants a lot of creatures in play that might die, which doesn't tend to be blue's game. Green, on the other hand, frequently has tokens and small creatures that are likely to perish. These facts made it easy for us to move the mechanic from Grixis to Jund.

We were now happy with carnage in Jund, but Grixis had become mechanicless. So Mark Rosewater was commissioned to fix this problem and he did—he created unearth. The development team like the mechanic right away and we added it in.

Carnage existed for months as Jund's mechanic, but over times we grew less happy with it. Similar to prey, we liked some of the cards but wanted to lower the numbers, partly because some of the designs were weak and partly because having lots of triggered abilities going off all the time lead to overly complex games. An example of a card we weren't thrilled with was the predecessor to what eventually became Thunder-Trash Elder. This was a

CARDNAME does not untap during your untap step.
Carnage – Whenever another creature goes to the graveyard from play you may untap CARDNAME.

Here are some of the comments that foretold the "doom" of this ability word. 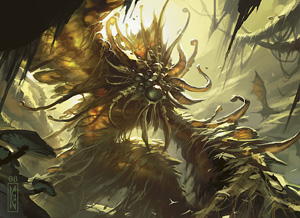 Obviously, there were a lot of negative feelings about this guy until he changed back to a simple devour guy. Probably the most telling comment is AF 2/5. Aaron Forsythe had, from the beginning, disagreed with me about removing devour from Jund and in February he was starting to push for bringing it back. Since he is the director of Magic R&D, it was probably a good bet some more changes would be happening to Jund.

Additionally, we started to play Future Future League Standard with Shards of Alara, and people were enjoying the devour cards (minus the keyword) that were still in the file. This is an example of how we use the FFL for much more than balancing the cards. Our hours of playing are also used to gauge how fun and appealing we believe our cards are. So once we introduced Shards to FFL, positive comments started getting posted in multiverse on the devour cards, like Ken Nagles's on Mycoloth:

KEN 9/5: Please gas this guy, he's fun as hell, with very nice tension and a huge reward for putting 'all your eggs in one basket' for one 'fingers-crossed!' turn. Every Prey guy after him is totally nuts. We must give Doubling Season decks their due!
KEN 1/16: [DELETED – SPOILER]
KEN 2/13: Want to try 2GG, on the grounds that this is the most fun card in the set.

, but I'm pretty sure that turn-three devouring a Llanowar Elves to make a 6/6 Mycoloth would have been too much)

Comments like Ken's can go a long way in affecting a set, and this time they did. Eventually it was decided to bring back devour and kill the ability word carnage. But as we did when we first killed devour, we kept a lot of the carnage guys we liked, just without the word—cards like Deathgreeter, Hissing Iguanar, and Algae Gharial.

Ken made another contribution to devour. He was the one who came up with the somewhat radical template for a few of the devour creatures like Tar Fiend. Normally Tar Fiend would use words like "For each creature sacrificed this way, target player discards a card." But Ken's version is simpler and more flavorful. He proposed that we instead say, "target player discards a card for each creature it devoured." Everyone in R&D liked it, so we did it. This may be new precedence for more flavorful templating in the future!

In the end we printed a few more devour guys than I think we needed, but overall I'm happy with the way things worked out. Carnage isn't at a high level and therefore isn't making game states annoyingly complex. We got to keep the best designs from both mechanics, so in the end I'm very happy with the way it turned out.

A Few More Points of Interest

While I was looking through the old comments in Multiverse I ran into a few others that caught my interest. The first was a comment I made on Tar Fiend. Nate Heiss had played this card a bunch, and he felt it was too strong.

MP 3/13: Nate complains and complains about this cards power level so we give it +1/+1.

At first my reaction to my comment was "Wow, I am truly a jerk!" Was I rubbing in the fact that we were powering up a card Nate Heiss wanted to weaken? But then I remembered why I wrote that. At the time, Tar Fiend was a 3/3 with fear. Nate had built a deck that proved Tar Fiend was annoying, so we changed it, removing fear but in exchange changing it from 3/3 to 4/4. Now that you know the whole story you can see I'm not a jerk after all!

DAL 8/31: Some "when goes to graveyard" triggers in the set would play well with Prey and with the many Sac a creature effects in wUb and the some in uBr.
MR (9/07/07): I needed another artifact creature and this won solely by process of elimination.
DAL 9/7: How many Dark Globuses will find their intended targets vanish before DG comes into play, forcing DG claim his own life? It's a fun moment.
MP 11/2: Fan of this one.
DB 11/7/07: I like this too, good answer to annoying utility guys that never fight.
[DELETED – SPOILER]
JT 1/17: Nice 'n simple.
Del 1/18: Confirm that this will be mandatory?
AF 2/5: Even more fabulous card.

Interestingly, Devin Low's comment made way back on 8/31 (that's 2007) may have been the bud of the carnage design that eventually made its way into the set.

Blister Beetle's playtest name was Dark Globus, as referenced in Devin's 9/7 comment. It was named after Mark Globus, one of the Jund designers, by Mike Turian, who likes to name cards after R&D members. He continues this in Conflux with Surprise Watkins, named after Rob Watkins, who designs D&D and Star Wars Minis.

I wonder if anyone will guess what the card is from the playtest name ... ?

Posted in Latest Developments on December 5, 2008