elcome, ladies and gentlemen, to the very last day of Scars of Mirrodin previews. I realize that's a bit of a silly thing to say, as the whole set is now up in our Visual Spoiler, so there's not a lot of previewing still happening. However, that means that tomorrow is the Scars of Mirrodin Prerelease, your first chance to play with the new set's cards. Prereleases may offer both Sealed Deck and Booster Draft play, so I'll spend some time today talking about Scars of Mirrodin Limited. I don't want to give too much away before you've had the chance to play with the cards yourselves, but I can at least show you the tip of the iceberg.

I talked two weeks ago about the decision to repeat Mirrodin's cycle of mana Myr. One of the most important things to us about Scars of Mirrodin is that we needed to make enough callbacks that players had things to recognize from last time. The mana Myr were key cards in straight Mirrodin Limited the first time around, due to affinity and the large number of equipment cards in the set. Affinity is gone, but metalcraft is here in its place, and there are still plenty of equipment cards lying around just waiting for something to pick them up. Between carrying equipment, turning on metalcraft, mana acceleration, and keeping you from mana screw in land-light draws, the Myr will be all-stars for you this weekend. They're both powerful and fun, and I'd encourage you to think about playing as many as you get.

Mark Rosewater spent time in his columns this preview season talking about why infect is the way it is, instead of being some variant on Future Sight's "poisonous" keyword. The big reason, of course, is that with infect, creature-pumping effects give you lots of extra mileage. We normally have plenty of creature-pumping effects in any given set, but we put more in this set than normal because of this. 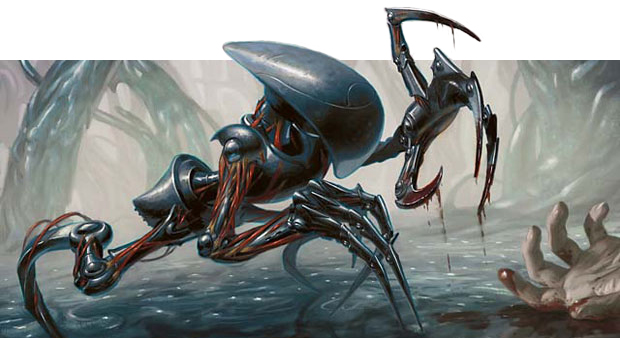 One of Steve Sadin's preview cards this season was Trigon of Rage. That card is strong on its own, of course, and its recharge ability requires red mana. But that doesn't mean you have to play it in a red deck. I find that it's just as strong, and maybe stronger, in a black-green infect deck, where Plague Stingers start coming across for four poison counters over and over.

It's also not just permanents that you need to worry about. You shouldn't be surprised to learn that there is a Giant Growth effect in Scars of Mirrodin, but you will want to be extra wary of it when your opponent is attacking you with an infect creature and a lot of mana ... 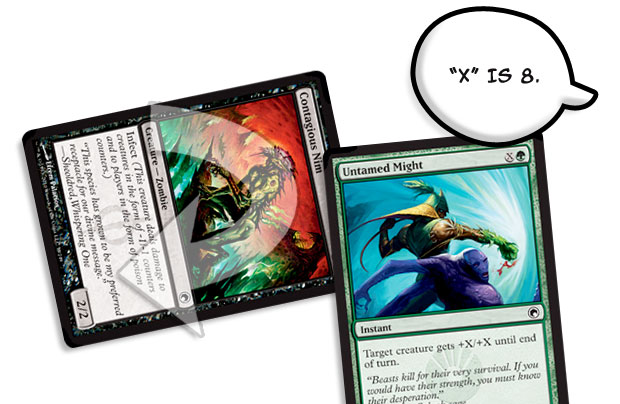 One of my earliest worries about the Scars of Mirrodin Limited format was that it would have two monolithic archetypes: infect and not-infect. In fact, I was so worried about this that I thought it was the biggest problem we were facing. Mark Rosewater continually told us that that wasn't going to be true, and that he had plenty of success combining infect and non-infect creatures in one deck, but I just didn't believe it. One of the things that I've learned as a Magic player since getting inside Magic R&D is that the world's strongest Limited players, including many of my coworkers, are ruthless about what cards they play. If a card doesn't fit their strategy, they cut it for a card that may be objectively weaker but fits better into their deck. I assumed this logic would force people to the two extremes when strong players started drafting. 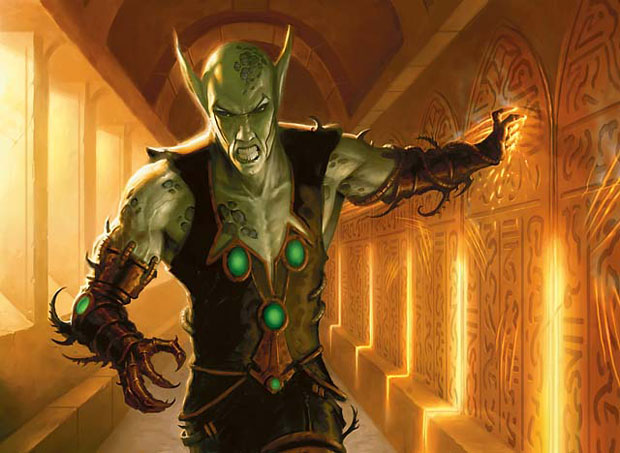 In hindsight, I wasn't giving Mark nearly enough credit when I thought this. As always, development caused many things to change, but one thing that Mark did well was build a number of infect creatures that filled particular roles. The card that opened my eyes to this the first time was Tel-Jilad Fallen. In an early draft, I remember building a red-green deck that was a bit light on artifact removal. I was doing my best to not play infect creatures, but when I got run over by an artifact-heavy metalcraft deck, I found two Tel-Jilad Fallen I had randomly picked up in my sideboard. They came in, and did a good job of completely shutting down my opponent even though they didn't really have the chance to attack.

A few playtests later, I found myself with a very aggressive black-red deck that had four equipment cards. I was a little short on cards if I wasn't willing to play any infect creatures, so I dumped two Plague Stingers into my deck with a frown, thinking that I'd end up putting equipment on them and trading them for other creatures. Little did I know that those two cards would singlehandedly be responsible for two of my game wins. The board would get stalled and my Vulshok Heartstokers would no longer be able to attack, but I would kill my opponent's flyers with burn, and a heavily equipped Plague Stinger would come across to deliver ten poison counters. 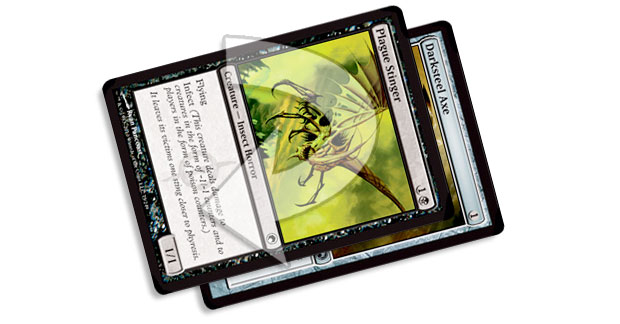 I do not tell you these things to say that it's not worth playing an infect deck. If you choose to go that route, there are plenty of cards like Cystbearer, Blackcleave Goblin, and Contagious Nim that drafters not interested in a dedicated poison deck will probably leave for you. However, don't be afraid to put random infect creatures in your deck even if you don't plan on poisoning your opponent to death. Things will work out just fine.

While I was in the real world, a new set release was one of the most exciting times to be a Magic player. The combination of playing with brand new cards and having tons of players who don't always play in tournaments come out to be part of the Magic world was intoxicating. I still love the energy around set releases, but it's a little different now that I'm inside Magic R&D. For example, much of the excitement comes from watching players' excitement and reactions to the new cards. There's still an important piece to the puzzle that has not changed, though, and that's the excitement of ripping open boosters and playing with our actual printed cards for the first time. 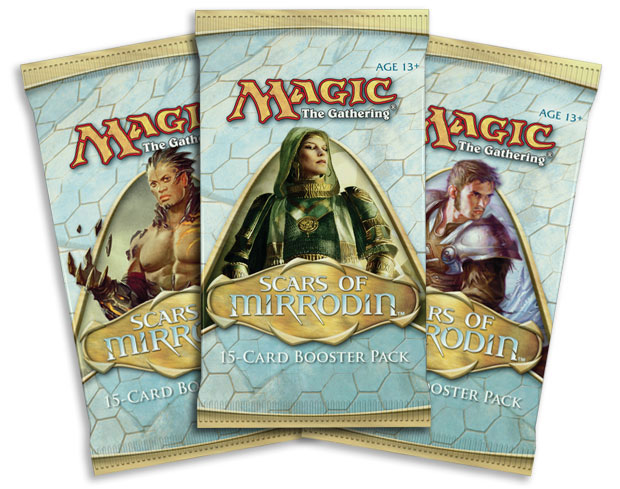 Each Tuesday, we have a big department-wide meeting during which we usually talk about some grand issue that we all must face together. This week's meeting was scheduled to have some kind of group exercise, but instead when I got to the room, there were four tables, each adorned by a box of Scars of Mirrodin and surrounded by eight chairs. Piles of basic lands could be found elsewhere in the room. That could only mean one thing: Draft! 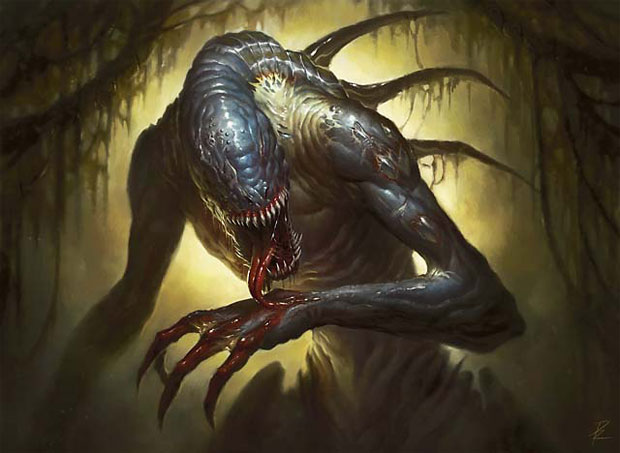 I opened a tough choice between Skinrender and Grafted Exoskeleton. I consider Skinrender to be more powerful in a vacuum, but in Scars of Mirrodin the fact that Grafted Exoskeleton is an artifact is very important. In draft beginning with an artifact rather than a colored card leaves your options open. I chose the Skinrender then proceeded to cut off black with the exception of picking up a late Shatter. I was rewarded in pack two with a second Skinrender fourth pick.

The red in my deck was a little anemic; I was passing to Alexis Janson, who ended up playing red-white, and software architect Ryan Dhuse opened Koth of the Hammer one seat to my right in the third pack. I was also displeased with the amount of Myr in my deck. I only saw two Myr in the draft. I took the Iron Myr that I saw, but I let a Copper Myr get past me that I probably shouldn't have. With two Sylvok Lifestaffs, a Darksteel Axe, and a Heavy Arbalest, I would have been happy to play as many Myr as I could have gotten my hands on.

Here's what I ended up with:


My first match was against Alexis. My games against her aggressive, red-white metalcraft deck were fast. This was partially because her deck was low-slung and partially because of her awkward mana draws. I won on the spined and ichor-stained backs of my two Skinrenders, which kept her from getting anything going.

I had a more complicated match against development manager Dave Humpherys, who also happens to be in the Magic Pro Tour Hall of Fame. His near-mono-white deck had a mix of equipment and metalcraft interactions. It also had a "splash" for Geth, Lord of the Vault. All three of our games went long, which gave his Geth time to show up and grind me away in games one and three. I managed to steal the second game with a heavily equipped Plague Stinger, to which my two Corpse Curs gave a second and third lease on life, but that wasn't enough to win the match.

For a different take on our Tuesday meeting draft, check out Brian David-Marshall's article today.

As I mentioned before, Scars of Mirrodin Prerelease events will take place this weekend. I'm very pleased that I had the opportunity to draft Scars earlier this week, as due to personal circumstances I won't be able to travel to one. If you're looking to meet someone famous, though, there are plenty of large regional Prereleases around, many of which will have Magic celebrities and artists in attendance. If you're not in the mood for traveling, hundreds of stores around the world will be running their own local Prereleases. Either way, we hope to see you this weekend!

My favorite of these cards is Sword of Body and Mind. The combination of the two abilities is bizarre but brilliant in practice. My favorite thing about the card is that it once allowed me to win three different ways in the same draft deck: damage, poison, and decking!