Prerelease draws near! Are you prepared? Have you been paying attention?

One reader sent me a letter last week asking a question that has probably been on the lips of quite a few people over the last month:

“I'm totally confused on the whole guilds thing in Ravnica. It seems like some kind of two-color groups, but I missed it if this was explained and am totally clueless on the guilds. Could you go into a little more detail please? How will they impact the cards, and the game? What do they mean? Why do they matter? Thanks.”
--Chris

Okay, Chris, the important thing to know is that the concept of “guilds” has no mechanical impact on gameplay at all. Instead, it is a way to communicate the flavor of this set and the block as a whole. From the Ravnica: City of Guilds FAQ: “Each two-color combination in the Magic game is represented in the world of Ravnica by a guild – an organized association of people with common beliefs. Four of these guilds appear in this set and the remaining six will appear later in the Ravnica block.”

Each card that is associated with a guild has its guild's symbol in the background of its text box (that looks really spiffy in foil). To be part of a guild, a card must have mana symbols of both of its guild's colors on it somewhere, or have the guild's keyword, or both. For example, the following cards would all be considered part of the Dimir (blue-black) guild: a card that cost

to play, a card that cost

Again, the guild symbol doesn't actually mean anything during the game; it just looks cool and brings the world to life.

There are four guilds present in Ravnica—the Boros (

). You can check out the story behind these guilds on the flavor page here. The other six guilds won't show up until the next two sets, so you should get comfortable with these four for the time being.

The next section is a must-read for anyone attending prerelease events, as it should clear up any confusion surrounding the mechanics in the set. Think of it as a comprehensive review.

How The Mechanics Work

Each guild has a keyword associated with it that only appears on cards of that guild's colors.

Radiance (red and white). Ironically, the first keyword is not technically a keyword at all, but rather an ability word (so named because it does not require reminder text or support in the comprehensive rules).

Transmute (blue and black). Transmute is a tutoring mechanic that lets you turn spells in your hand into other spells with the same converted mana cost.

Dredge (black and green). Dredge is a replacement ability of cards in your graveyard. You have the option of “drawing” these cards again whenever you would draw a normal card.

Convoke (green-white). Convoke is a mechanic that lets you essentially use creatures as lands to cast certain spells. Each of your creatures that you tap as you play a spell with convoke reduces the cost of that spell.

Hybrid cards (all guilds). The one new mechanic that runs through each guild is hybrid cards, such as Selesnya Guildmage. Hybrid cards have special “half-half” mana symbols that can be paid for with either of two colors of mana.

Hopefully that's enough clarification to get you through the weekend's tournaments. I suggest reading tomorrow's Saturday School before leaving the house for even more clarifications, and remember to always ask a judge if you have any questions regarding how new cards work.

Is It All Guilds?

Just because the guilds are the focus of the new set doesn't mean every card is tied directly into the multicolored theme. We have already see interesting mono-colored cards previewed, including Telling Time, Carven Caryatid, and Galvanic Arc, and today I get to show off what may be one of the most splashy mono-colored cards in the set.

Even though Richard Garfield has been making cards for well over a decade, he is still not out of fresh ideas. He came up with convoke. He made the first Aura with a “comes into play” ability that led to the Galvanic Arc and Flight of Fancy cycle. And he submitted one neat card in design that really caught my eye.

“Imagine a demon being hunted by knights,” he explained to the group one day. The idea was simple—an undercosted creature whose balancing drawback was that he gave creatures to your opponent. The idea had been touched upon before in Magic, from the obscure Varchild's War-Riders to the core set staple Hunted Wumpus. But never in a way that was so clean. I really liked how Richard's card was like a little story in and of itself. “Will the knights ever catch the demon? If so, who will emerge victorious?”

The card was put into the file as something close to the following:

As design began winding down, there was some concern that all of the interesting parts of the set were linked to the “guild model,” and that there wasn't anything splashy in the regular old single-colored cards. We needed to find a rare cycle. As a designer and developer, I have found that recognizing a good idea is a skill almost as good as having good ideas. I immediately knew that we had the basis of our cycle right in front of us—Richard's Hunted Demon.

With Mark Rosewater manning the white board, we sat around a conference room one day shouting out numbers and abilities for our five new “hunted” creatures. A pattern emerged—there were five creatures, and each supplied your opponent with an increasing number of token creatures. The white one, for instance, gave your opponent just one creature, all the way up to the blue one, which gives five. Apart from that, anything went. The cost of the creatures ranges from two mana to five. The sizes and abilities of the tokens all vary. Sometimes the tokens have enough power to take down the hunted creature, sometimes not. All we were looking for were exciting-looking cards that led to interesting game decisions, and I must say we hit the nail on the head.

In development, only two of the five changed at all, and those changes were very slight. Here, for example, is the white one in its glory, unchanged from design: 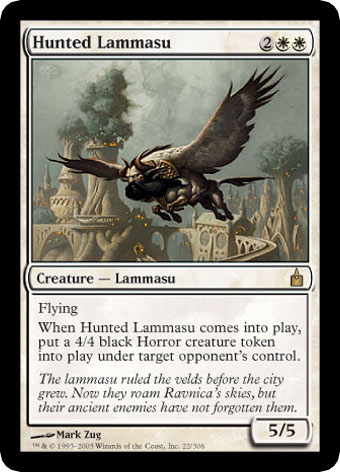 I can visualize it now… the great lammasu, flying around the Ravnican skies, hesitant to land for fear of running into the vile horror that stalks it from the ground, day and night…

I can imagine all segments of the audience enjoying these cards. They are large creatures for Timmy, efficient beaters for Spike, and a challenging puzzle for Johnny. They are tempting in both limited and constructed play. They do fascinating things in free-for-all multiplayer games. What's not to love?

Even though I did the bulk of my design work on the Dimir cards, I am a huge fan of the Boros. Perhaps it's because they were the underdog going in—white-red was the least popular of all ten color pairs going in, and we wanted so badly to make it cool somehow.