The Rebirth of Cool

can get dicey when putting a small expansion together, mainly because the previous large set – the block’s namesake and layer of all groundwork from which the small sets must spring – uses up the simplest and best implementations of all the block’s new themes and mechanics. 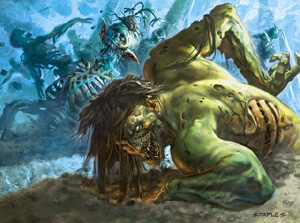 Look at suspend, for example. In Time Spiral, not only are there run-of-the-mill suspend Search for Tomorrow and Errant Ephemeron, but also Phthisis (which have their own unique play decisions), spells that Lotus Bloom except via suspend, cards with abilities that are active Greater Gargadon, and even one card that Nantuko Shaman than to play. That’s a lot of exploration for a single mechanic, especially when you consider that we plan to use it in all three sets of the block, and that each small set needs to come up with a twist of some kind that the other sets don’t have.

Don’t worry, Planar Chaos has its twist on suspend. We figured it out; we always do. But it can be difficult to make sure the first set packs in enough goodies to make new mechanics and themes seem deep and interesting, but not so much that there’s nothing really left for the rest of the block.

Of course, it’s not all doom and gloom for small set design. The road goes both ways. Often in the design of the big set, so many good ideas come forth that the set can’t hold them all, and the small sets get to start off with a collection of goodies that there just wasn’t room for in the previous set.

The card I’m showing off today is part of a cycle that was just that – a leftover from the Time Spiral design that just didn’t fit in that set, yet made perfect sense in Planar Chaos. Time Spiral’s nostalgia theme generated lots and lots of awesome card ideas, and there was no way to cram them all in one set, even if the set was over 400 cards like Time Spiral was. So Planar Chaos got this little gem and its brethren:

Teneb and his four siblings (you’ve already seen Oros if you have been paying attention) are homages to the very popular cycle of dragons from the Invasion set, a cycle headlined by Rith, the Awakener and Dromar, the Banisher. But instead of being the allied “arc” colors (three colors that are adjacent on the wheel, like white-blue-black), the new dragons are enemy “wedge” colors (two allies and their shared enemy). And, as I said, these dragons are the first legends of those particular color combinations, and each one is only the third card in its color combinations total (each wedge combination has been used on a cycle of Apocalypse rares and a cycle of Dissension rare split cards. Teneb shares colors with Overgrown Estate and Crime//Punishment).

As part of Time Spiral planning, part of our design assignments was to find cycles in Magic’s history that weren’t complete. Those were difficult, as we tend to finish cycles (The only ones I remember coming across were the lack of an anti-blue Northern Paladin, and the lack of a “Possessed Aven” creature that started out black.) But we did discover a bunch of allied gold cycles that could spawn interesting enemy-colored cycles, the Invasion dragons being the best of the bunch. Our initial plan wasn’t that these were new versions of Rith and the original posse, but rather that there had always been five more that the makers of Invasion didn’t want to tell you about. We made the five dragons, and even gave them some trappings, including their own “lairs” – lands that tapped for three different colors of mana and had either vanishing 4 or suspend 2 (no, we weren’t sure how suspend lands would work exactly). I believe we even discussed giving them “charms” as well along the lines of Dromar’s Charm, but that never materialized.

As Time Spiral came together, what with its Bogardan Hellkite, Pardic Dragon, Scion of the Ur-Dragon, and timeshifted subset of gassy reprints, the design and development teams decided the last thing the set needed was a cycle of 6/6 Dragons. So they were slipped into Planar Chaos, which made much more sense because that set was centered around shifting the colors of known cards.

Now that the Dragons were in Planar Chaos’s “What If?” universe, there was talk of making them into timeshifted versions of the actual Invasion dragons. So the black-centered “wedge” dragon would be a new version of Crosis – the previous black-centered dragon – say, “Crosis, the Delouser.” But once the cycle of five non-dragon timeshifted legends was complete (Akroma, Mirri, etc.), it was decided that the dragons should be new entities, dark mirrors to those in Invasion, with all-new damage triggers.

In Constructed, history shows that dragons with these stats can make an impact – after all, Rith, Crosis, and Dromar have shown up in Top 8 decklists in various formats, and the mana bases available to players are much better now than they were five years ago. While not on the power level of Yosei or Kokusho, the new Planar Chaos dragons are still very efficient and hard-hitting and should be good top-end finishers in several decks.

And on top of all that, they probably don’t make Dragonstorm decks any better. What more could you ask of a dragon?

If you like what’s on that list, be sure to head out to your local Prerelease this weekend. Myself and several of my R&D cohorts will be in attendance at the Seattle event.