This first one has nothing to do with Eighth Edition, but I got so many emails after my "Taking on Vapor Ops" article that I thought I should point this out here: R&D is currently looking for an intern. It's a 6-month gig that requires you to move to Seattle and requires you to be really good at building decks, but the job description really is "play Magic 30 hours a week and spend the other 10 hours telling the rest of us how it went." Follow this link if you want to see all the details: Job Opportunities at Wizards (There are several other jobs posted there too, including an editor position that really wants to go to a Magic player.)

The second issue I'd like to follow up on is color hosers. Now that the full Eighth Edition spoiler list has been revealed, I've noticed quite a few people commenting on how powerful some of the "color hosers" are. Especially in light of my article from last year's color hoser week (Adjusting the Nozzle), several writers have questioned why Hibernation is back, and why Choke is around, and why Karma returned. The answer to that question comes from an article I wrote last June called Hibernation or No?

Basically, I made a pretty compelling case against powerful color hosers, and everyone inside R&D seemed to agree with the gist of the argument. But what precisely constitutes "powerful?" I thought Hibernation was a bit over the line, but even after a lot of thoughtful conversation, there were still people inside R&D who disagreed. It seemed like a perfect subject for a column and a poll, but you guys let me down and sided with William! All kidding aside, the poll was fairly lopsided (71% said "Hibernation" while only 29% said "no") so I surrendered the argument and the dev team put Hibernation into the set. (I guess that makes Hibernation the little known 14th card from the Selecting Eighth Edition promotion, though we never promised we would abide by the results of that poll.) Once Hibernation was in the set, it seemed only fair that green should get a blue-hoser that was similarly powerful so Choke went into the set too.

Meanwhile, Karma was added in part because our color-pie discussions had resulted in the conclusion that white is the "taxing" color and Karma seemed to play up that flavor really nicely. Personally, I don't think any of these hosers are as devastating as Compost was, but maybe I'm wrong. We'll get our first peek at the impact of all these new cards at Worlds in August and I'll be watching to see what happens just like you will. 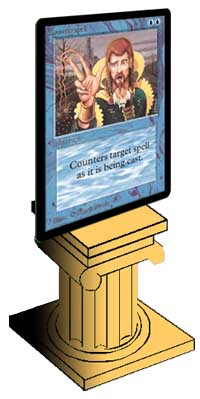 While I'm on the subject of articles from last year and polls that affected Eighth Edition, I feel obligated to say a few words about Counterspell. When I wrote Asking Permission last April, we had already decided to take Counterspell out of Eighth. There was still plenty of time to change our mind if we didn't like the way the environment was shaping up in the FFL, but unless something started to break, we felt it was time to "End the 10-year reign of terror" (as Aaron so elegantly put it). However, in the poll from that article 68% of you said "No, Counterspell is not too powerful" so we decided we should investigate the issue a little further. I then wrote a follow-up article (Counterspell Conundrum) which was essentially just a thinly veiled attempt to convince you all that Counterspell actually is too good and the game would be better off if that effect cost more than just

This series of poll results really did give us pause. We had already spent a lot of time thinking about this decision and we hadn't made it lightly, but I don't think we realized quite how important it was to all of you that the game maintain its iconic spells and its direct ties to the Alpha set. In the end, we just could not get around the fact that we all thought the game would be better off without Counterspell, at least for a little while. Magic is supposed to constantly change and force players to reevaluate their strategies and question what they think they know. Upon further review, we became even more convinced that what we were doing was in the best interests of the game, even if the readers of my articles disagreed. (I'm sure this won't be the last time we ask you your opinion and then decide to do the opposite.)

So far, we're quite happy with the way our "make counterspells weak" strategy is shaping up, especially in Onslaught Block Constructed. The absence of any mana-efficient permission spells in that format has allowed players to built some really cool decks around some crazily-costed spells. Tournament players used to turn up their noses at anything that cost more than about 4 mana, and for 4 mana a spell had better at least rearrange the board. In OnBC, however, players regularly cast stuff that costs twice that much. Obviously, Magic should not always be about who can ramp up their mana and get off the most powerful spells, but it's at least a nice change of pace.

I argued in Tending the Land that it's really good for Magic to have good multilands running around. Why, then, did we remove the painlands in favor of the comes-into-play-tapped lands from Invasion? First of all, we believe the Invasion duals are plenty good enough to play with and we believe they will accomplish the goal of allowing players to play two- and three-color decks. I admit that they aren't quite as powerful as the painlands that they are replacing, but they do have a couple of large advantages: Their biggest advantage is that they are uncommons. We know that not everyone buys enough cards to track down four copies of every rare, but everyone does benefit from being able to play their spells. We felt that the multilands in the core set should be uncommon so there would be a lot more of them floating around in the world, and lots more could make their way into the hands of new players and casual players. A second big advantage is that they are significantly simpler than painlands. While the painlands are at a really nice power-level, they aren't nearly as elegant as their Invasion counterparts. Aesthetics matter, especially in a core set. Some astute readers of this site have also pointed out a third advantage of this change -- an advantage that also applies to all our other changes too - whenever we make the cards in a core set weaker, it opens up room for us to do better versions of those cards in our expert-level sets.

This last follow-up isn't so much an actual issue as a teaser. For those of you who are interested in hearing precisely what's going on with Magic Online, tune in to the Magic Online website early next week. Our developers are currently putting the finishing touches on Version 2.0 (which goes live on Monday, July 28th - the same day that Eighth Edition goes on sale) and we almost have the final list of changes and new features ready for public consumption.

So that's what's up with a fairly random collection of issues. I hope you all enjoy playing with Eighth Edition as much as we enjoyed putting it together. This was a fun one, especially because of the unprecedented amount of public feedback we were able to get to help us decide what exactly should go into it. Next week at this time I'll be at GenCon celebrating Magic's Tenth Anniversary. I hope all of you will also be joining in on the party by playing in your local Global Celebration tournament too. Thank you for all your help with Eighth and thank you for supporting the ten years of sets that came before it.