Red Can Do This?

the two-plus years that this fine website has been up and running, Latest Developments has discussed many different and interesting red cards and abilities. Here is a list of some of the better ones; reading them will give you a good overview of how Magic developers think about red.

If you've been paying attention to what cards and abilities are in the last few blocks, you should be able to make a list in your mind of what kinds of abilities we give to the color red. Here are the most important ones:

That list encompasses red in a nutshell right now.

What Red Doesn't Get

So what can't red do (normally)?

Enchantment desctruction. The inability for red to destroy enchantments defines the color almost as much as its ability to blow up every other kind of permanent. Even Obliterate and Jokulhaups leave enchantments where they are. R&D considers the color hoser Anarchy a big mistake because it let red destroy cards like Worship and Circle of Protection: Red.

Life gaining. If any color is the antithesis of life gaining, it's red.

Card drawing and library manipulation. These (very blue-feeling) abilities imply "thinking," and red hates thinking. Red is the color of "topdecking," meaning it draws its cards "honestly" and believes it can win that way. Of course, rules are meant to be broken, which leads us to our main topic.

One red card that has been showing up in Standard and Block lately is the scry burn spell Magma Jet. It seems simple enough -- for

, deal 2 damage to something and scry 2. The damage effect is what makes the card playable, but it's the scry effect that makes it good.

Many deck analyses I've read on various Magic websites always say something akin to the following about Magma Jet: "This card is exactly what this deck needed. With so few ways to smooth out your draws, the scry ability really shines and lets you keep up the pressure."

It's funny... the thing you normally aren't allowed to have is the thing you want most. Red decks love the scry effect because it is something they rarely have access to.

And in the case of Magma Jet, they almost didn't get it again. 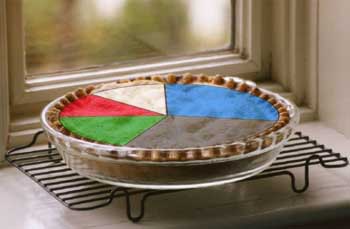 The infamous color pieMark Rosewater hinted at the hurdles Magma Jet had to overcome to see print in his preview article "Scry Me a River." It was even worse than he hinted at.

The card was designed exactly as it was printed, except it was common. When we first started playtesting Fifth Dawn, so many developers were chafed by the idea of even a little deck manipulation in red that I began to fear for the existence of scry as a whole.

To quote one member of the dev team: "strongly dislike scry in red. Just seems like it blurs the color flavor in a way we don't like, but this is rehashing."

before it was handed over to development, partly to appease nay-sayers, and partly because he, too, was a little jarred by the card.

Many arguments followed. I was one of the guys firmly on the side of scry; I likened it to other overarching minor card-manipulation mechanics such as cycling and cantrips (cards like Zap that replace themselves). My stance almost backfired. "You're right," one developer said, "maybe red shouldn't have cantrips anymore, either."

Here's my opinion: Magic is a card game. The creatures are all cards. The counterspells are cards, the combo pieces are cards, the lands are cards. Every color needs and uses cards to win. When we pigeon-hole card drawing, tutoring, and library manipulation into one or two colors, those colors end up feeling like they're "better" because they have access to more of what makes the game go 'round. We can compensate for that imbalance in three ways. 1) Make the card drawing and tutoring less efficient. 2) Make the other kinds of cards better. 3) Share the love.

We have done numbers one and two a lot over the history of the game. Ancestral Recall is now concentrate, and Demonic Tutor is diabolic tutor. Big creatures have gotten better and better as the game has evolved, meaning that if you want to waste your time drawing too many cards, you're going to get your head kicked by monsters.

Scry was an attempt to further #3 a little bit. Every color wants to draw good cards, so how can we allow them to do so without compromising one of the game's defining features, the color pie? Cantrips, cycling, and scry all help to do that.

Brian Schneider and the rest of the Fifth Dawn development team allowed red to have Magma Jet in the end with one small compromise--it was made uncommon so that it didn't show up that often in limited (or in booster packs in general). That change in commonality really reinforces the idea that red players should be grateful for any little scrap of deck manipulation they can get. I, for one, am much happier than had the card been printed as a common for three mana.

Scry won the day this time (and red gets to keep cantrips as well... that was a close one!). Of course, we'll have to weigh the position of red and every other color the next time a deck manipulation mechanic comes up in design. I don't expect red to win every time, to be sure.

There's a lot of information here. "Do nothing" has more votes than any other one answer, but the combined totals of people that favor some type of errata to fix the problem is higher that those that do not.

What have we decided to do? That is still up in the air. We had a two-hour debate on the subject and I expect many more hours to come. Each potential solution carries with it some problems that will affect us (and you) in either the short-term or the long-term, and we still haven't nailed down a plan. I'll keep you posted.

One reader wrote to me saying that he felt Wizards didn't do a good enough job presenting card errata, so he was fearful of choosing an option that would lead to any significant amount of changes. Please note that our "Autocard" window lists the Oracle version of the cards you click on. The text on the picture of the card might not be right, but the text below the picture shows the Oracle text. For example, click this link: Oubliette.

The card text on Oubliette doesn't really match the Oracle text at all, but the Oracle text is presented as the "current official wording," and is how the card should be played. Incidentally, Autocard also shows creature type, which is useful in instances where the card's type has been officially changed: Anaba Bodyguard.