Posted in Latest Developments on March 1, 2002

Are we doing the right thing?

We’ve been getting a lot of feedback from you readers asking us to reprint your favorite cards and mechanics. That prompted us to take a look at the Reprint Policy that we announced many years ago and the weird thing is that the world of Magic has changed so much that it’s not clear the policy is still doing exactly what it was intended to do. I’d like to talk a bit about this policy and then get more feedback from you guys once I’ve spelled out some of our thoughts. 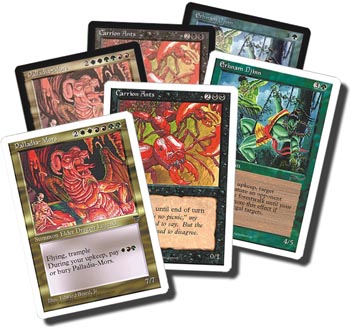 The Reprint Policy was devised and announced in the wake of a fairly big mistake: Chronicles. In Chronicles and Fourth Edition, Wizards of the Coast reprinted quite a few cards from the first few Magic expansions that had fairly high prices in the secondary card market. The original versions of cards like the Palladia-Mors, Carrion Ants, Killer Bees, Mishra's Factory, Erhnam Djinn, and others plummeted in value when these cards were reprinted.

We obviously can’t promise that cards you buy from us will go up in value, but we’re happy if they do and we hope your collection will maintain its value in the long-term. Wizards learned from this mistake and the Reprint Policy was developed and announced so that everyone would know what Wizards’ intentions were with respect to reprints. You can click here to read the current policy [Editor's Note: The Reprint Policy was changed on 07/19/2002; read the new version here.], but I’ll just tell you the gist: Wizards made a list of cards it promised never to reprint. The list included all the cards from Alpha that had rotated out of print before Fourth Edition along with all the uncommons and rares from Antiquities, Arabian Nights, and Legends. In addition, from Ice Age through Urza’s Destiny, all the rares had only one opportunity to get reprinted in a base set and after that they were added to the reserved list, never to be printed again.

The whole policy was based on the assumption that out of print cards go up in value over time. This logic works just fine for cards like the Mox Ruby -- their prices would clearly drop dramatically if they were suddenly included in, say, 8th Edition, and thus the Reprint Policy makes sense.

However, we saw a really interesting phenomenon recently when we brought back some old iconic cards. When Serra Angel was reprinted in 7th Edition, the price of older versions of Serra actually went up, not down. If you think about it, that makes sense. Sure, the supply of Serras has gone up, but the demand has gone up even more. Suddenly she’s tournament legal again and even players who don’t care about tournaments are getting their hands on her and then learning that an older version exists with different art. Some people prefer the older art, some people just think it’s cooler to play with older cards, etc.

Basically, the secondary market seems to have changed a bit in the seven years since Chronicles was released. Older versions of Sengir Vampire didn’t go down in price when everyone’s favorite vampire was included in Torment. It’s too early to see exactly what the long-term effect will be, but if the price is changing at all, it’s going up. In general, there now exists a class of cards whose value might go up if they were reprinted.

I don’t think very many of the cards that fall into that category are actually covered by the Reprint Policy, but I think there are at least a few. I would guess that this line of thought applies to all the commons and uncommons from old base sets that are on the list: Juggernaut, Sol Ring, Clone, Resurrection, Demonic Tutor, Regrowth, Living Wall, Basalt Monolith, Earthbind, etc. A complete list is on the right.

Now I’m not saying we should (or would) reprint all of these cards. Sol Ring in particular is absurdly powerful (I’m surprised it wasn’t rotated out at the same time as the Moxes) and Odyssey’s Diabolic Tutor should tell you what we now think of the price charged for Demonic Tutor. Psionic Blast and Sinkhole also leap out at me as cards we would probably never reprint.

However, what about Juggernaut or Clone or Regrowth? Regrowth was restricted “back in the day” and remains restricted in because there are degenerately powerful cards available in those formats that people shouldn’t be able to get back easily. However, would it really be broken in current ? I don’t think so (though I would be sure to test it extensively in the FFL before reprinting it). Would Juggernaut screw anything up? No… mostly it would just be kind of cool to get to play with Juggernaut again. Meanwhile, Clone was only taken out of print because it had rules problems. If the rules could be done in a way that was both simple and clear, wouldn’t it be cool to have Clone back? And I think the price of these old cards would not be adversely affected by a reprint. In fact, the price of the older versions may even go up.

So what do you think? Am I missing something? Do you think the Reprint Policy should be modified to allow Wizards to reprint commons and uncommons from the early basic editions?

Posted in Latest Developments on March 1, 2002