Posted in Latest Developments on March 21, 2008

With school all done, the card graduates to the "real world" on the Prerelease weekend. Designers and developers can no longer change it. Now the card has to stand on its own. At first the card is the new guy on the block everyone is sizing up. The card plunges into experimental relationships with a variety of other cards, some nice and simple, some crazy and wild, in a quest to find the best combination.

Over time, the card settles into its natural role in the community, growing into true adulthood. As its time in Standard draws to a close, and the card's display boxes stop showing up on card store shelves, the card moves into its middle age years of Extended playability. And finally, the card retires into the eternal old age of Vintage and Legacy.

And usually that's the end of the story.

But some cards' lives get another chapter. Some cards get reprinted in core sets, and some even get reprinted in expert level sets. These cards are reincarnated, brought back for specific purposes to a new life, a new world, and a new time.

It's no surprise that the core sets are filled with reprints. That's their whole identity. But in expert-level sets, we reincarnate cards as reprints for two main reasons. 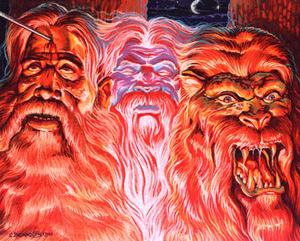 First, sometimes the cleanest, simplest way to fill a specific role in a set is just to reprint the simplest, cleanest version of that card. Stone Rain made its debut in Alpha. Then designers in Ice Age and other large sets wanted to use the simplest, cleanest possible Stone Rain wording they could, which meant reprinting the actual Stone Rain. Other teams of designers over the years agreed, and we reprinted Stone Rain in the expert level sets Ice Age, Mirage, Mercadian Masques, Tempest, and Champions of Kamigawa. This philosophy can be summarized as "Use the simplest version of a staple."

Likewise, when Champions of Kamigawa wanted a simple, defensive, blue common creature, reprinting Tempest's Horned Turtle as River Kaijin was the simplest, cleanest way to do it. River Kaijin serves its role well, just like Horned Turtle did in Tempest, without any unnecessary text clunking it up. When we reprint simple creatures this way, we often change the creature type to match the new world.

The second reason to reprint a card in an expert level set is because the reprint takes a whole new meaning in the new context of the new block. Elves of Deep Shadow, reprinted in Ravnica, is a perfect fit to the Golgari guild and the mana-fixing needs of a gold set, in ways that didn't even come up in its original home of The Dark.

Sometimes even reprinting a vanilla creature with a new creature type gives the card a whole new identity. River Kaijin's Spirit subtype is quite relevant in Kamigawa. Glory Seeker's Soldier subtype is quite useful in Onslaught. And Elvish Warrior's Elf and Warrior subtypes are both quite helpful in Lorwyn / Morningtide.

The expert-level set with the highest number of reprints in recent years is Mirrodin. The set doesn't feel like it has anywhere near this many, but hidden away in Mirrodin are actually eighteen reprints. To create the first artifact set since Antiquities, the Mirrodin design team specifically looked to find cards from the past that would play particularly well in a heavy-artifact world. And they found a number of subtle gems that play interestingly different roles in Mirrodin than they did in their original homes.

Taking a closer look at the reprints in Mirrodin provides a window into the best reasons to reincarnate old cards into a new life.

Shatter fits the "Use the simplest version of a staple" philosophy of expert-level reprints, just like Stone Rain. And like Stone Rain, Shatter was also reprinted in Ice Age and Tempest.

But Shatter also fits the second philosophy of expert-level reprints, because it definitely takes a new role when reprinted in the new context of Mirrodin. In core set drafts, Shatter is usually a late pick and rarely makes maindecks. But in artifact-heavy Mirrodin, Shatter kills a lot of creatures, all the equipment, and tons of powerful global artifacts in the set. In core set drafts, Shatter is sometimes picked fifteenth, while in Mirrodin drafts Shatter is sometimes go first!

Shatter is a great example of how interesting it can be that the exact same card can have such a different impact in different environments.

In Visions, Creeping Mold was the first example of a straight Disenchant effect in green for less mana than Desert Twister. It also provided a nice land destruction complement to Ice Storm. Finally, Creeping Mold also had the advantage of being usable on lands if no Disenchant targets presented themselves. In Mirrodin block, it served all these purposes, pairing up with Reap and Sow instead of Ice Storm, as well as sharing Shatter's huge power-up in a world of artifact targets.

This card was originally proposed as "

. Instant. Counter target artifact spell." But after a few arguments, reprinting the exact Annul from Urza's Saga won out. In Urza's Saga, Annul served mostly to counter the block's many powerful enchantments like Vile Requiem, Hidden Spider, and Opal Archangel, with a little bit of artifact countering on the side. In Mirrodin, the focus is reversed, with countering artifacts becoming the primary value, with countering enchantments as a side benefit.

As one of the very first "comes into play" creatures, Uktabi Orangutan was famous for busting Nevinyrral's Disks and Cursed Scrolls. The reprint Viridian Shaman had the right stats to pummel the powerful artifacts in Limited, Standard, and Block Constructed, with a new emphasis on destroying artifact lands that Uktabi never had. Viridian Shaman's Elf Shaman subtypes also brought Uktabi into Elf decks and even one Sachi, Daughter of Seshiro FFL build. Viridian Shaman's appearance in Tenth Edition makes her an option in modern-day Elf or Shaman decks based on Lorwyn and Morningtide as well.

A flavorful combination of burn and artifact destruction, Detonate had a new role in Mirrodin block: Destroying artifact lands for just

Different Interactions in an Artifact World

Neurok Spy looks so different from its Beebley origins that you probably didn't even recognize this as a reprint. Only occasionally evasive in the world of Urza's Saga, Neurok Spy proved downright unblockable in Mirrodin. Also a Rogue.

On the flip side, fear creatures like Razortooth Rats are usually reliably unblockable, but with all the artifact creatures of Mirrodin, fear decreased a lot in value. Perceptive players picked up this quickly, learning that a

2/1 fear is a very different Zombie in Mirrodin than in other sets.

Terror leads you down a similar path as Dross Prowler: Since Terror doesn't hit artifact creatures, it's got to be way worse than it is in core set drafts, right? Smart players figured out that while Terror is indeed weaker in Mirrodin than it is in Tenth Edition, Terror in Mirrodin is still a pretty good card! Dross Prowler decreases a lot in value if your opponent has half artifact creatures and half fleshy ones, since he can't get through. But while Dross Prowler is weak against that lineup, Terror is still pretty good, since it can still kill half of the opponent's creatures. Taking down Somber Hoverguards, Spikeshot Goblins, and Fangren Hunters made Terror still well worth its cost.

This kooky Ouphe is a fun example. Ice Age quietly contains far more artifacts with activated abilities than you might think: A whopping thirty-five! That's a lot of mischief for the icy Brown Ouphe to wreak, including against Jester's Cap and Icy Manipulator. But in Mirrodin block the number of targets was even greater, including every single member of one of the block's major new features: Equipment.

The Most "Artifacty" Artifacts of All

This category includes artifacts the Mirrodin design team felt were among the most beloved, most powerful, most unique, or most artifact-feeling artifacts of all time. Reprinting in Mirrodinallowed these old artifacts to take center stage, interacting with a variety of new "artifact matters" cards in the block in new ways, and allowing a whole new generation of players to get their hands on them.

Bizarre and very much an artifact. He's bigger than any color could get for this cost at that time. Like his predecessor Su-Chi, Cathodion's ability was costed as a drawback for its mana burn danger, but clever mages found ways to turn it into an advantage. A host of new "Sacrifice an artifact:" abilities in the block gave him plenty of new combo potential.

In the early days of Magic, Icy was one of the most famous artifacts of all time, carrying a special mystique. Along with Chrome Mox and Gilded Lotus, Icy Manipulator provided a "Greatest Artifact Hits of Magic" feel.

This humble whirring fellow is another of Magic's most famous artifacts as the first card that cost zero mana to play, breaking the fundamental rules of mana-for-effect. The designers also knew he'd be good with two of our major block themes: both Equipment and affinity for artifacts. Unfortunately, the department did not foresee just how good this little 0/2 would be with Equipment and the overpowered affinity for artifacts, and the whole affinity mechanic proceeded to annoy people in Standard, Block Constructed, and Extended for years. (Oops.)

A classic, powerful artifact creature and a great fit with the +1/+1 counter theme of the block.

Another artifact creature that had subtly struck a chord with many Magic players in Antiquities, including myself, Forsythe, Rosewater, and many others who still work here. He also plays well with Equipment, applying your Equipment bonus to both offense and defense without needing to reequip. (Vulshok Gauntlets LOOK OUT!)

Mirrodin was already breaking new ground in combining types with artifact lands like Vault of Whispers. (Again: Oops.) Stalking Stones represented an interesting earlier venture in this direction that players had enjoyed, and that had been powerful in Erik Lauer and Randy Buehler's mono-blue control decks.

Mirrodin has only one repeat that doesn't say "artifact" anywhere on the card (including the implied fear reminder text). This is very much the "Use the simplest version of a staple" philosophy of expert-level repeats. Arrest had already played well in Masques, much like the oft-repeated Pacifism, and was a good choice to fill the simple Pacifism role in a set with many creatures with dangerous activated abilities.

And that's how we reincarnate carefully chosen, deserving cards.

Fourteen hundred stalwart souls advised staying with the tried and true: follow Richard Garfield's lead and stick with the more straightforward Raise Dead. Five thousand seven hundred adventurous souls encouraged more use of Grave Scrabbler's template in the future. Many emailers talked about the benefits of a hypothetical "

Instant. Return target creature card from a graveyard to its owner's hand." being able to interact with graveyard-based strategies that are otherwise hard to interact with: Patriarch's Bidding, Genesis, and the like. Some emailers wished for a third poll option: "Do some of both!" Since the first option was simply "Do more Grave Scrabblers," not do all Grave Scrabblers, the first option left open a large possibility for "Do some of both." We'll think carefully about this issue for future sets.

Posted in Latest Developments on March 21, 2008