he reprints in Magic 2012 have inspired lots of discussion among the Magic community. Cards like Solemn Simulacrum and Grim Lavamancer have already made their mark on competitive Standard. For some others, like Zombie Infestation and Smallpox, revealing them got players excited, but the role that they will play is not yet clear. A few have received a more mixed reaction; in particular, I have seen feedback from some players that they would have preferred new cards instead of having the Titans and the dual lands from Magic 2010 come back. 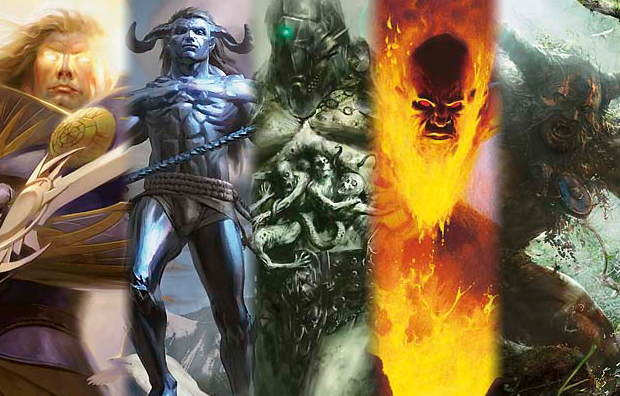 Here is a secret: when the Magic 2012 design file was handed off to development, the Titans were not in the file. After some vigorous discussion and advocacy, I convinced everyone that we should put them back in.

Before I tell you why, let me give you some context, all of which was in the front of our minds when we were working on the set.

Historically, core sets have been a source of stability in Standard. They consisted only of reprinted cards and were legal for two years. They were also the place that many of Magic's staples lived. Cards like Llanowar Elves, Wrath of God, and Karplusan Forest showed up set after set after set, and one could trust that those cards would always be around. This also helped returning lapsed players, who often recognized cards they played with before they left and consequently felt more comfortable returning. 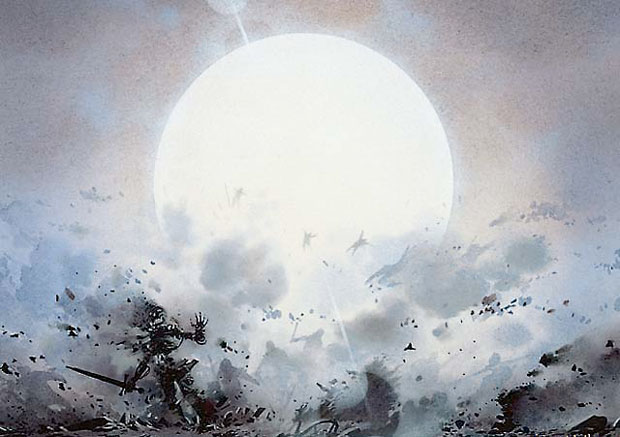 Although these core sets gave Magic a sense of stability, they weren't very exciting releases. The set functioned much more like a list of cards that happened to be legal than an actual product that was fun to buy, which wasn't great for anyone.

Since Magic 2010, we've been including new cards in each core set. This went over very well with players, who like new cards. It's also good for us, as we get to engineer a Limited environment and include new Constructed cards, like Great Sable Stag and Obstinate Baloth, designed to deal with the problems of the day.

Despite this, we've also tried to keep some measure of stability. Llanowar Elves and Birds of Paradise haven't gone anywhere. Some new Magic 2010 cards, like Elvish Archdruid, Goblin Chieftain, and the five Magic 2010 dual lands, have stuck around as well. That lets us keep some stability, both for making returning lapsed players more comfortable and for just giving Magic a sense of familiarity over time.

Because of where core sets fit into our schedules now, they have a natural lifetime in Standard of fifteen months—from their release to the October after the ext core set. That's shorter than any of our other sets, but we think there are compensating factors. First, fewer of the cards in the set are functionally new, with just around a hundred each time so far. Second, we reprint many of those functionally new cards the next time, so some of them get another lease on life.

The change to releasing functionally new cards in the core set, though, affects competitive players' needs. They need to find new cards a little more often. If we don't reprint any of the most important constructed cards from the previous core set in the next core set, then that's even more cards that the competitive player has to track down. That would be a big change from before, when core sets were bastions of stability in Standard.

The fifteen-month core set legality window also creates some strange three-month periods. Magic 2012, for example, only has three months in Standard before Zendikar block and Magic 2011 rotate out. Right now, Grim Lavamancer is operating at full power with its friends Arid Mesa and Scalding Tarn, but upon Innistrad's release, it'll probably miss them. Grim Lavamancer won't change, but the change in the cards around it will make it seem like it is quite a different card. 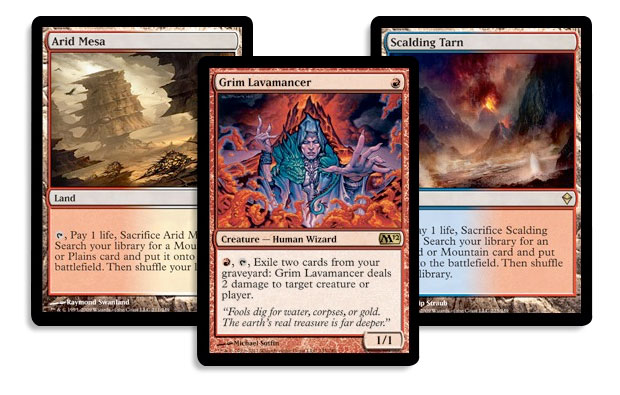 The fifteen-month core set legality window (as explained by Aaron Forsythe here) also creates some strange three-month periods. Magic 2010 featured the ever-popular Megrim, but Magic 2011 chose to replace it with Liliana's Caress. This created a strange combination deck that used cards like Burning Inquiry to randomly deal tons of damage to the opponent. Once again, this was pretty cool, but there was only a three-month window in which it existed. This kind of three-month spike provides exactly the opposite of the stability that the core set used to.

The first card that we had to answer tough reprinting questions about was Lightning Bolt. Aaron felt strongly that it belonged in Magic 2010, and were fortunate to discover that it didn't break anything, despite being very good. Things got controversial when Aaron designed Magic 2011 and insisted that it be included there as well. Lightning Bolt is incredibly powerful, and we weren't sure it was right to keep it around for another year. Aaron didn't want to give players the kind of whiplash that I was just talking about, though, so he asked that we keep it for a second spin. 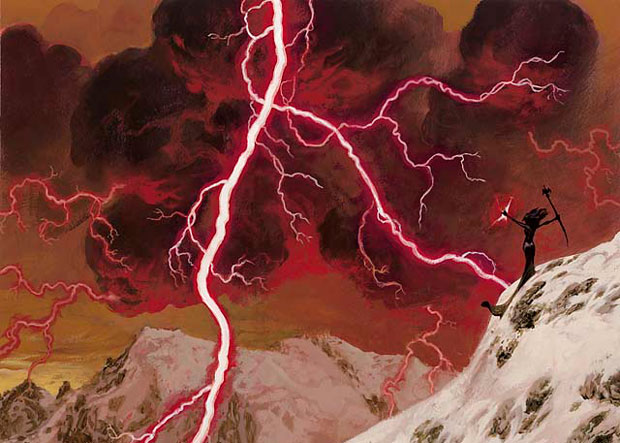 It was obvious to me that by Magic 2012 it would be time for Lightning Bolt to go. I suspected that many players would respond well to memories of Tenth Edition if I replaced it with Shock and Incinerate, so I used them as my replacement. However, I had to figure out what to do with Mana Leak, which returned to the core set with Magic 2011. I ended up using the same logic as Aaron, and chose to keep it around for one more year. I'm no longer certain about whether this was correct, but it's what I did.

The more controversial place that I made a similar decision was the Titans. They went over very well in Magic 2011, and lots of players put tons of effort into acquiring them and playing with them. If we did not include them in Magic 2012, they would be gone just as quickly as they arrived. I thought that this would give the core set too much of a transitory feeling to it. 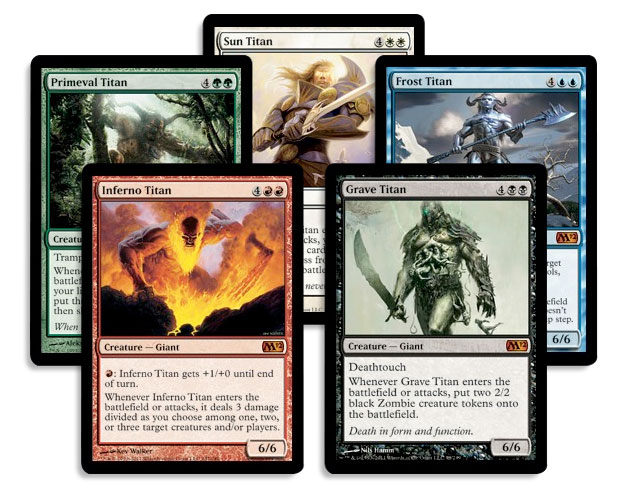 As a player, I would have expected some amount of stability in every part of the set, including the highest-rarity cards. This meant that I wanted to reprint some desirable mythic rares. Most people thought that the Titans only made sense as a unit. I explored not reprinting them, but that would have meant reprinting Baneslayer Angel again, Time Reversal, Demon of Death's Gate, Gaea's Revenge, and Platinum Angel, only a few of which are serious Constructed cards. With no compelling alternative, I successfully advocated for the Titans instead.

The story behind Glacial Fortress and friends returning is even more mundane. We think Magic is more fun when players can cast their spells, and repeating these lands again was intended to make them accessible to more players over time. We never considered replacing them. 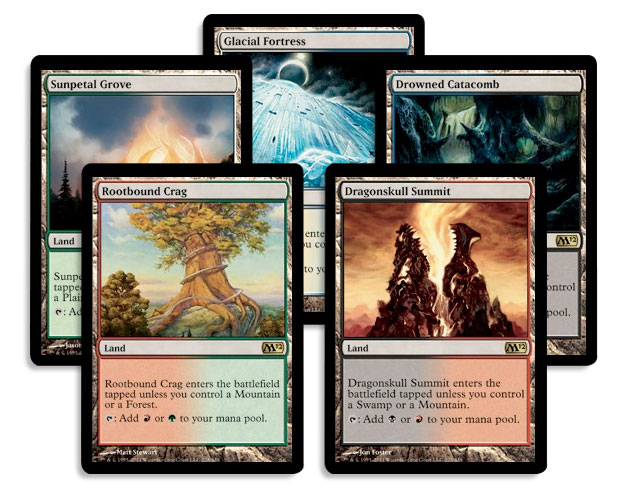 I was originally surprised when some players reacted negatively to the Titans' second appearance. However, I now think I understand what happened. Third-party tournament circuits like the StarCityGames.com open series are running more tournaments with great coverage than ever before. On top of that, Magic Online has never been bigger, and the results from tournaments there continue to pour in every hour of every day.

The collective effect of these things is that you all figure formats out much, much faster. Three months of Magic community work now is equivalent to perhaps six or even nine months of work five years ago. That means that we may need to reexamine our model of the core set as a bastion of stability. I would be uncomfortable with getting rid of Serra Angel and Llanowar Elves, but I'm sure that we could have replaced the Titans or Mana Leak in order to change the competitive environment without getting rid of the keystone cards that lapsed players will recognize when they come back.

To be sure, the "problem" of "too much" Magic being played is one that we're thrilled to have. In the grand scheme of things, it's hardly a problem at all. Despite that, it is something we're all going to have to adjust to. We work with long lead times, so you won't see whatever we do to react to it right away, but we're thinking about what to do as you read this.

Before Magic 2012 was revealed, I was confident in my decision to reprint the Titans and had never questioned the decision to repeat the repeat the cycle of dual lands from Magic 2010. In the modern world today, though, the stability that once marked the core set may have become outmoded. We would be happy to adjust if that's true, so I'll leave you with two poll questions. Before I go, though, I'd love to hear from you in the forums too. Are you happy about the Titans and the lands? If yes, why? If not, why not? I look forward to hearing your thoughts.