Posted in Latest Developments on November 30, 2012

ike any good game, Magic is many things to many people.

To many people, Magic is a game of giant dragons... 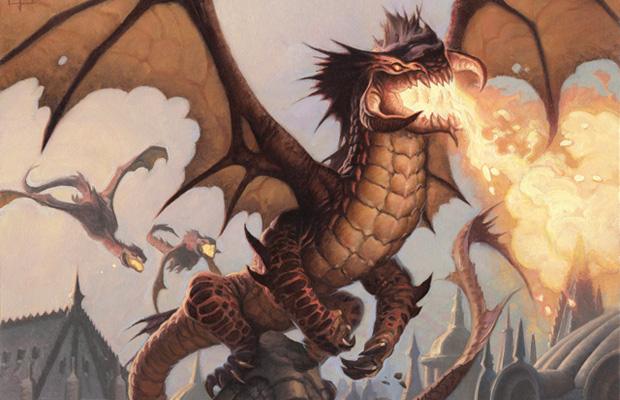 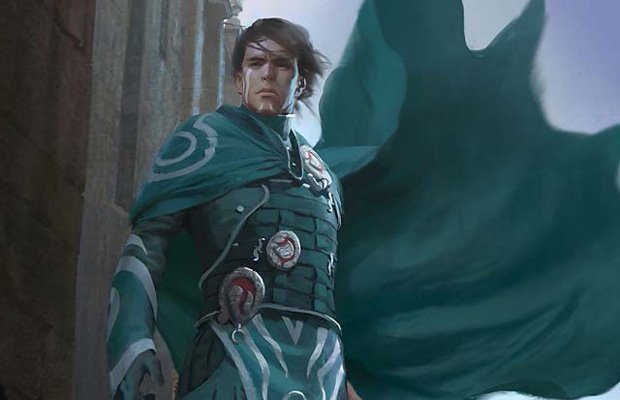 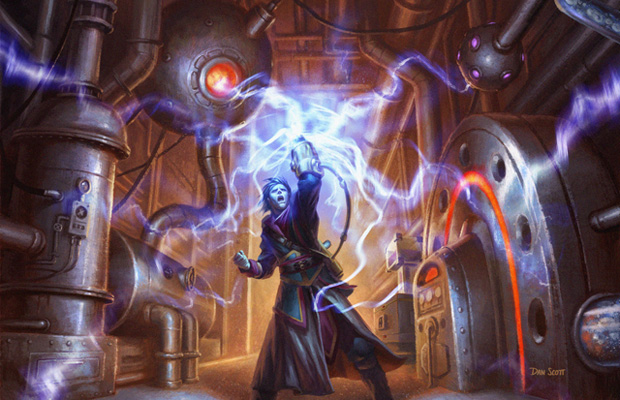 To many other people, Magic is a game of mana, cards, and life points. 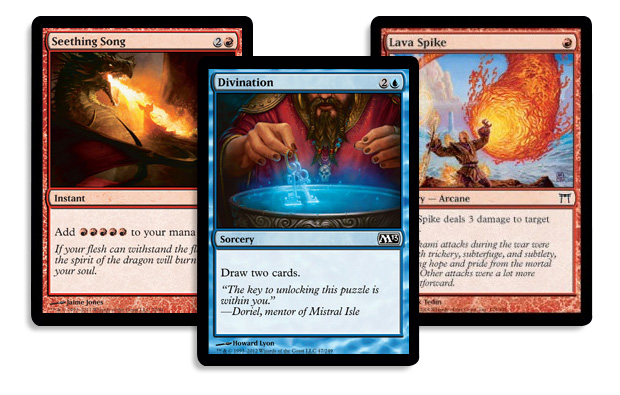 When I was only a player in the real world, Magic was much more the latter thing to me. I played in lots of tournaments and traveled around the country to do so, and I was much more interested in what cards did than what they were. Now that I'm a developer, I have to care about both things, which has been an excellent learning exercise.

Although many of the people in our more invisible casual crowd care more about flavor than mechanical power, I've found that many of them are still easily turned off by numbers that confuse them. For example, have a look at Dawnglare Invoker.

This was one of the very strongest cards in Rise of the Eldrazi Limited. If you could get to eight mana, you could just activate this every turn and never take damage again as long as your opponent didn't kill it. In the meantime, it was a reasonably priced 2-power flier. Due to how long Rise of the Eldrazi games went, eight mana was not at all unreasonable, especially when the card you started with before getting to eight mana was quite good. However, many players rejected these, saying they were never going to get to eight mana. No matter how much I wave my arms as a trained professional and say they're wrong—and they were!—that doesn't mean that these cards get any more appealing. Happily, the target audience for Rise of the Eldrazi's Invokers was serious drafters, who quickly learned to value those cards' ability to break Limited standoffs. We knew the Invokers would do nothing for more casual players, and that was fine with us.

Let's have a look at another mechanic that many casual players misevaluate.

Think Twice has been relatively strong both times it came through Standard. In Time Spiral block, it helped enable Mystical Teachings control decks to draw enough cards while still playing mostly on their opponents' turns. It seems to be doing something similar now, but with Sphinx's Revelation instead.

I got a wonderful piece of feedback on this card recently from a less-experienced player, though. He said, "I think this card is dumb because drawing a card costs one mana." That notion came, undoubtedly, from a bunch of other Magic cards. 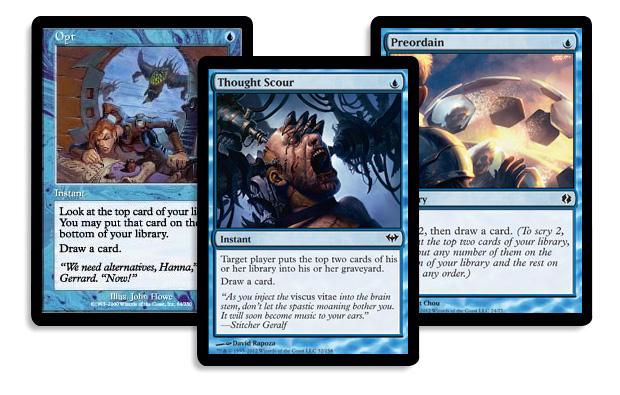 These all cost one mana and do more than just draw a card. Why bother paying three? You and I might know that getting to draw a card without having to spend a card is much stronger than drawing a card while spending a card, but that player didn't, and there's no way I can make Think Twice look appealing to him.

For a more extreme example of potentially unappealing flashback costs, have a look at Forbidden Alchemy.

One of the last changes we made to Innistrad in the last phase of development was to move this card's flashback from six to seven. We felt the card was just a bit too good at putting games away in graveyard-based control decks at six, so we bumped it up by one. From my perspective, this card change worked out well, as the card still saw plenty of play in both Limited and Constructed and helped enable exactly the sort of grindy graveyard deck we were hoping to allow.

You may be thinking to yourself, "But Forbidden Alchemy would have been so much better at six to flash back!" If you aspire to be a Magic developer, I suggest you be careful with that sort of statement. After all, all cards are stronger if they cost less and all creatures are stronger if they gain trample. The important question to ask is whether Magic would be more fun for everyone on balance if a card were stronger. Often, we decide that the answer is no, even when it would strengthen a deck or strategy that we personally like.

This leads me to scavenge, the Golgari mechanic in Return to Ravnica.

I retched in horror when I first saw scavenge. It's a beautiful, simple, and clean mechanic, but I knew the numbers we were going to have to put on scavenge cards were going to look ugly to a lot of people. For example, Ken had a

2/2 in the file with "Scavenge

." In very early devign (the time between design and development) Limited playtests, I played the hell out of that card, because a

2/2 was already close to good enough on its own. So close, in fact, that there was no way we could charge only four mana to Scavenge it.

Just like with Think Twice, though, there are easily comparable Magic cards that make "Scavenge

" look terrible. I wouldn't be surprised if some players complained to me that giving +2/+2 to a creature cost two mana. 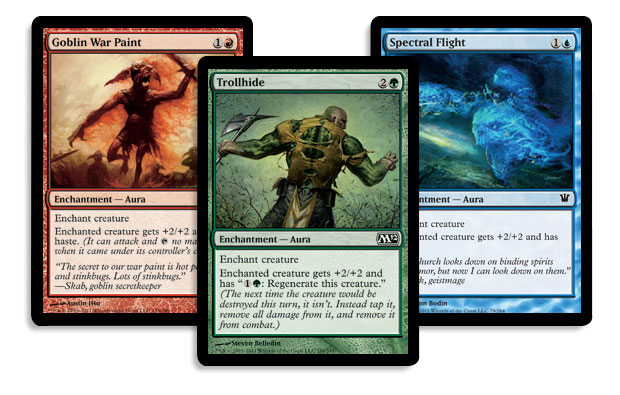 Shawn Main recently said something wonderful that I will share with you, although I am sure I will not get it exactly right: "Every time I meet someone who says he or she'll never get to eight mana, I think to myself that I have met an optimistic person." What he means is that most Magic players only think about the good situations: the ones when they open a hand with lands and spells, play all their cards on curve, and stop drawing lands after turn five. More experienced Magic players know there are gigantic swings of luck hidden in the darker corners of the game: mulligans to four, two-land hands that never give you a third land, five-land hands that give you five more by turn seven, and other horrible things. Those players still work to maximize their best draws, but they also work to minimize the disasters that take place when they get their worst draws. Mechanics like flashback and scavenge help do that, and as such they are usually undervalued by optimistic people.

As a player, I love these mechanics. I've played thousands of games, and that's enough to know that sometimes I will need things to do when I draw my tenth land in twenty cards. As a developer, though, I'd be happy if I never had to try to develop one ever again. No matter how hard we try, these mechanics nearly always land with a flop. Have a look at Deadbridge Goliath.

As Mark Rosewater mentioned on Monday, this card was quite poorly received when it was revealed, and many commenters claimed that six mana was too much to pay for five +1/+1 counters. If you go by Increasing Savagery, which many players were content to play mostly for the front half, five counters should cost four mana. Deadbridge Goliath has a pretty reasonable body for its cost—good enough to get cards like Blastoderm and Phantom Centaur into Constructed—and offers only a two-mana markup on Increasing Savagery in exchange for not costing you a card. That's close to as good a rate as we can possibly give you on this sort of thing, and the negative reactions we get each time we do something like this often make me want to not even try.

If I feel so strongly about this, why do we keep doing it?

First, I'm not the only Magic developer, and although I know many of my colleagues share my frustrations, I would guess that some of them don't have the same reaction. Second, it is our designers' job to come up with mechanics that are appealing. They keep coming up with these kinds of things, so we keep developing them and printing them. After all, the Magic developer audience is an extremely small portion of the Magic audience, so we can't listen to ourselves too much. In exchange, the designers have to trust that our mana costs—which often look high to them, too—are actually correct.

In the case of Return to Ravnica, I found it particularly revealing that Ken Nagle's stated favorite card in the set is Slitherhead. This is, of course, the only scavenge card in the set without a mana cost. Hilariously, that card does absolutely nothing for me, as the appeal of scavenge to me is long-game variance reduction. I want a body that trades with something real on my scavenge cards, so I love things like Korozda Monitor and Sluiceway Scorpion. I feel lucky if I get a Slitherhead to trade with something bigger than a 1/1, and then a single +1/+1 counter is unlikely to make a huge difference. I'd rather go bigger and longer than that.

In the end, we find that players like mechanics like flashback and scavenge enough to keep doing them. If your first instinct upon seeing the suite of scavenge cards was that all the costs were too expensive, you might be wearing a pair of rose-colored glasses. Just try to keep in mind all the games you've played that have gone wrong, and know that any scavenge cards you play will be there for you when you've drawn four too many lands.

Posted in Latest Developments on November 30, 2012