Rise of the Eldrazi Common Knowledge

Posted in Latest Developments on April 23, 2010

housands of Magic players across the world played in Rise of the Eldrazi Prerelease tournaments last weekend. This weekend, many players will play in Rise of the Eldrazi Launch Party events. Both of these are Sealed Deck tournaments, and so many of you are getting to know the commons from the new set quite well. Inside Magic R&D, we have a very different relationship with Magic cards, as we meet them near their earliest conception and watch them grow and change over months of development. Today, I'll give you a glimpse of the time in which we got to know them, and how we changed them into the cards you know now.

The following is a key to the people you're about to read Multiverse comments from.

A few people suggested that we remove the second point of toughness gain from Stalwart Shield-Bearers and add trample instead, but Matt convinced them otherwise.

There is a cycle of five Invokers in Rise of the Eldrazi. Each one has an activated ability that costs

to activate, and all of these abilities are large-scale abilities that end games. The Rise of the Eldrazi design team intended for Limited games to go longer than normal so that the colorless Eldrazi would be showcased, but they also knew that not everyone would have Eldrazi to end games with. The Invokers were built to serve as another way for players to move long games toward an end. Although their intentions were noble, there was a problem with the first ones.

TML 3/24/2009: These guys should all have bodies that you aren't embarrassed to have in a limited deck. They only help end games if they are in your deck, and they only end up in your deck if they aren't terrible before you hit 8 mana. 2C 2/2 is enough to get in a deck. C 1/1 is not.

Remember the invokers from Legions? 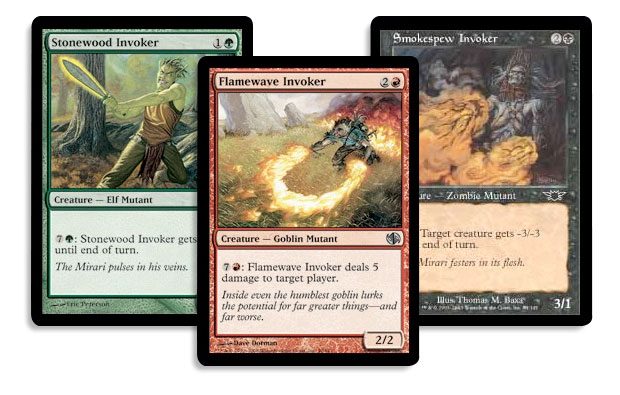 The shtick here is that these are reasonably priced creatures that you aren't unhappy to have in your deck in the early game. Because they are already in your deck thanks to their numbers, when you hit eight mana, you'll start doing cool things. The problem with the first version of the Rise of the Eldrazi Invokers is that their numbers weren't good enough. Dawnglare Invoker, for example, was a

1/1 without flying. Unsurprisingly, no one put that card into Limited decks, which meant that it couldn't help end Limited games.

Designer Ken Nagle, perhaps prompted by the lack of love that the Invokers were getting from playtesters, questioned their existence, pointing out that the Legions Invokers don't seem to be popular with casual players. However, Lead designer Brian Tinsman continued to fight for his vision of the Invokers:

BT 3/25: This set is dripping with casual friendly stuff already so these don't need to fill that role. They play an important function in allowing locked games to end spectacularly and provide dramatic tension as the player creeps closer to the critical number.

I don't think that at the time they were accomplishing Brian's goals, but that's why we have developers. He was pretty sure that the Invokers as they were could be developed into a good end product, so he let them be until the design handoff.

Once the set was handed off to the development team, the same issue came up again.

BT 4/13: I like the sense of excitement that the invokers bring when you are getting close to dropping your 8th mana. This new ability reads less powerfully and provides less of that excitement than the others.
DB 4/14/2009: I'm not sure it matters what it does, if its body in the meantime is a 1/1 -- doesn't seem like it gets into decks. I may misjudge Prosper limited though.
TML 4/20/2009: I still won't play this at C 1/1. I really want to put him in a deck though. Request 2C 2/2, 1C 2/1, something reasonable.

Proving that people do actually read Multiverse comments, lead developer Matt Place changed the card to the mana cost and numbers that it was printed at.

It was exciting to see Dawnglare Invoker and its friends start showing up in Limited decks and ending games.

Matt Place loves to draft Magic sets over and over, and he knows that it takes depth to make a set fun for him over many replays. Mark Rosewater, also a member of the Rise of the Eldrazi development team, loves to build layers of interaction into Magic sets. Between the two of them, they worked hard to construct lots of surprise interactions between different Rise of the Eldrazi cards.

The Eldrazi Spawn tokens that are such a centerpiece of the set were originally intended to make Eldrazi easier to cast. Neither Matt nor Mark were happy with there being only one thing to do with Eldrazi Spawn, however, so they made a push to add more interactions with them to each color. Shared Discovery was added during this pass, and during the same pass Lavafume Invoker gained the ability that it now has.

Note that our first name for Eldrazi Spawn tokens was "manabots." You'll meet Facebook Friends below.

See Beyond began life as a different card-drawing spell. I liked what it started as, and I'm not going to tell you what it was because I think we might print it someday. However, that card sparked the following conversation.

We are cautious about the amount of shuffling we put into Magic. Moments in which nothing happens for a while slow down games; video games try to minimize load times, and we do the same thing by only including shuffling when the card really wants it. In the case of the Zendikar "fetch lands," we knew that players had been clamoring for them for years and that they interacted well with landfall cards. Here, Aaron explains perfectly why the card needs to shuffle: you're just putting the card away for later.

Induce Despair is a card that we all had way too much fun playing with early on. Part of the fun of Unglued's Infernal Spawn of Evil is that you get to show off your huge monster early on and threaten what you will do later in the game, and here we got to do that trick again.

Brian's observation that this was fun and the ensuing search for more of this kind of card led to cards like Explosive Revelation and Living Destiny.

Ondu Giant is pretty much exactly the card you want in Rise of the Eldrazi Limited. A

2/4 gets in the way of little creatures, and every land is valuable even late into the game. The defender theme largely fell flat for me, but I enjoyed cards that helped me cast Eldrazi, and Ondu Giant is about as good at that as anything else in this set. I posted as much in Multiverse.

As an aside, while I was playing with Rise of the Eldrazi cards two weekends ago, I tweeted this picture of a hand I kept: 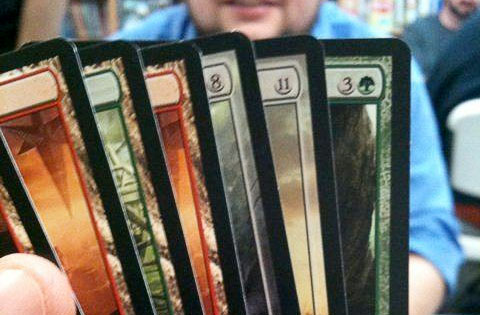 The card that costs

is Ondu Giant, which is perhaps the most perfect card I could think of to be the card in this hand that costs

. I won this game handily.

MP 5/12: Added facebook friends.
TML 5/12/2009: This is much, much more natural in play in this set than big small big. I like both existing, but I like this one being common.

Remember Facebook Friends from earlier? You're looking at it now. Big Small Big is, of course, Prey's Vengeance, the other Giant Growth variant in Rise of the Eldrazi. There was a point in time where both of these were common. I had tons of fun with Big Small Big, but it was also weird enough that I wasn't sure how I felt about it being the common green pump spell of the set. This card felt much more correct to me, and Matt must have agreed, since it's the one he kept at common.

I hope you enjoyed meeting all these cards at the Rise of the Eldrazi Prerelease last weekend. This weekend's Launch Parties are another chance to meet them, and today the set gets released into the wild. The Eldrazi are rising, and you'd better make sure they annihilate your opponents and not you!

Posted in Latest Developments on April 23, 2010