Rise of the Eldrazi Uncommon Knowledge

ne month ago, I gave you a window into the creation of Rise of the Eldrazi's commons by showing you comments from Multiverse, the database we use to build Magic cards. There were still other goodies in Multiverse from this set, though, and it would be sad if I didn't show them to you. Today, I'll show you comments from Rise of the Eldrazi's uncommons.

Here's a key to the people you'll read comments from.

It is no great surprise that the creator of such cards as About Face, Calcite Snapper, Crag Puca, Dwarven Thaumaturgist, Inside Out, and Myr Quadropod liked this card. You'd think that at some point he'd get tired of this, but it hasn't happened yet.

All Magic sets have cards that are internally controversial, but they also have cards that everyone falls in love with. This is what a multiverse record looks like when a card is loved. If I remember correctly, only the creature type and name changed on this card from prior to these Multiverse comments to print. That's impressive!

MR 6/15/09: This card seems too similar to Bone Bully. I like Bone Bully more.
TML 6/15/2009: They feel very different to me. This one is huge and kills one toughness guys; that one is little and kills one power guys.
GM 6/15: I'm with Tom, I never even considered them similar until now, and now that you mention it, I love the observation Tom made.

The "Bone Bully" that Mark Rosewater refers to here is Bala Ged Scorpion. The concern about cards being too similar to each other in the same environment is an important one. One of the things that makes Magic fun over time is variety of experience, and one of the tools that we use to preserve that is keeping cards within a set and environment different from one another. We would avoid, say, putting Douse in Gloom and Tendrils of Corruption in the same set; both of them are instant black removal spells that deal damage, only hit creatures, and gain you life. The experience of playing against these two cards is very similar, so having both of them doesn't add much variety to gameplay. We'd be much more likely to print Tendrils of Corruption alongside, say, Assassinate and Weakness, which do the removal gag very differently.

In this case, Mark thought that Bala Ged Scorpion and Akoum Boulderfoot stepped on each other in this way. I disagreed, as the category of thing that each of the cards was good against was quite different. Bala Ged Scorpion's specialty was going after Rise of the Eldrazi's many walls, such as Overgrown Battlement, Wall of Omens, and Battle Rampart. Akoum Boulderfoot didn't kill these, and instead took out things like Dawnglare Invoker and Enclave Cryptologist. They read somewhat similarly, but in play they were very different. Lead developer Matt Place chose not to change the card.

Explosive Revelation began life as a reprint of Erratic Explosion, an Onslaught common that famously combined with Draco to make a comical combination deck. Memories of that inspired lead designer Brian Tinsman to put Erratic Explosion into his own set, where it had common eight and nine mana creatures to hit. This resulted in some very positive feedback initially.

But wait ... what's that whispering? Someone has concerns about this card? Who could it be?

TML 5/12/2009: Rosewater's concerns might be addressed by making the card stay on top, which might be interesting.

Rosewater has concerns? Why won't he just talk about them? Oh wait, here he is.

MR 6/15/09: My concerns for this card (as they aren't listed yet) is this. The set is built around getting your big guy out. Playing Erratic Explosion and then losing your big guy (especially when trying to kill a small toughness creature) feels pretty bad. It happened to me and I've been gun shy about using this card ever since, thus making an unhappy experience instead of a happy one.
MP 7/2: Updated to Ken's idea, was Erratic Explosion reprint.
KEN 7/1/2009: Card is Greg Marques's idea and also satisfies MR's concern of kids being sad their Eldrazi goes to the bottom.

Many cards have complicated stories. Others have simple ones, and although I wasn't in the room when this card was made, I suspect that this card's story was simple. Someone offhandedly said that they wanted to keep the awesome card they revealed, Greg asked them if they'd be willing to pay a little more to do that, and they said yes. Cards are made like this every day.

For a few months after most developers are done thinking about a set, the Magic editors work hard to make sure that our cards and their flavor texts are printed correctly. The following exchange took place after the flavor text arrived from Creative.

What is [Turn the Tables], you ask? It is now known as Prey's Vengeance. 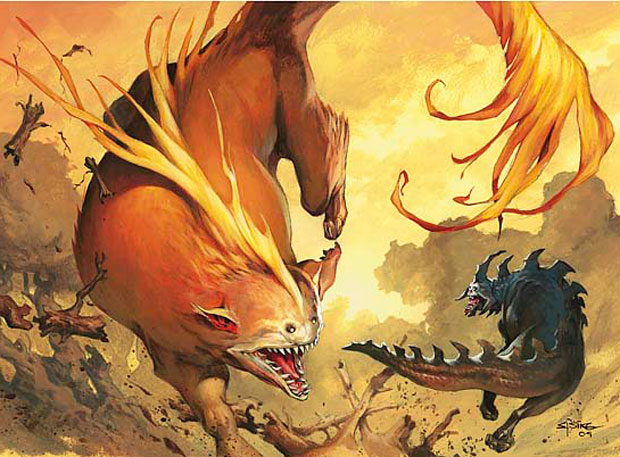 I'd say the meepling made a reasonable call. Go meepling!

What in the world is going on? Happily, Del came in to explain this before I even began writing this article!

Del 9/11: Saving the note in the flavor text field (before it gets overwritten by actual flavor text) so that TML has something in his future column about this that explains what's going on here. Placeholder name is anagram for "get mad onulet." I welcome improvements. Basically it needs to be "_____ Golem," where (1) the blank contains N, T, U, and (2) the rest of the letters plus G and M anagram into a word that can go in front of "onulet."

At the time of this comment, the card's name was Annubite Golem.

What is all this talk about Onulets? This Magic Arcana tells the rest of the story.

Flavor is a bit of a loaded word, and can mean different things to different people. One version of flavor is when a card matches its concept perfectly, like Protean Hydra, a hydra that grows two heads every time you cut one off or Djinn of Wishes, a djinn that gives you three wishes. That's the kind of flavor that the Magic creative team likes to create.

On the other hand, there's also goofy campy flavor, like when a Birds of Paradise picks a Sword of Fire and Ice up in its little beak and beats the crap out of you with it, or worse, when a Dancing Scimitar with a Sword of Fire and Ice dances a beatdowny tango all over someone. How can a bird wield a sword? For that matter, how can a sword wield a sword? This can be good for a laugh, but it's not the kind of basic fantasy flavor that drew so many of us into Magic in the first place.

Unfortunately, sometimes we come up with a card that plays so well that we would like to make it even though we can't think of a reasonable concept for it. This was one of those times. Rise of the Eldrazi is full of cards like Ogre Sentry and Rage Nimbus that you wish you could attack with, and we thought this equipment was cool. The idea of a warmonger's chariot works in a vacuum, even though it can get a little goofy on certain things, so we moved forward with it. However, some people still found the things you could do with it amusing, as you can see in this comment. 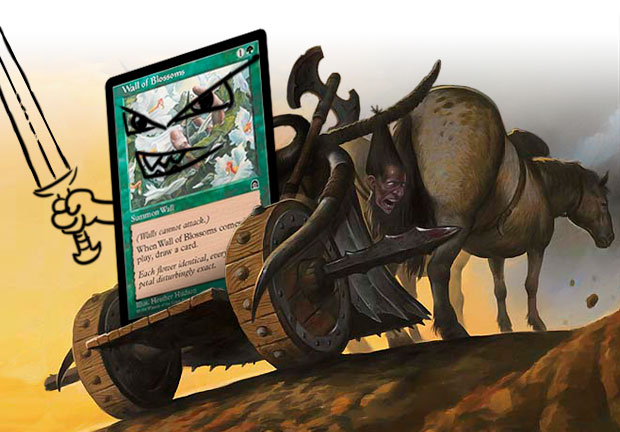 With that in mind, I'll ask a related question.