t's Planechase Week, and I've got a couple of cards to show you guys. The first is a "phenomenon," a type of card that Planeswalkers encounter in the Blind Eternities as they 'walk between planes. The second is an actual Magic: The Gathering trading card you put into Magic: The Gathering trading card decks, and is one of my favorite cards we've released in a while. It brings up a bigger topic, though, which is: How did we decide to start printing entirely new cards for our multiplayer releases? And what kinds of cards do we usually want to reprint? 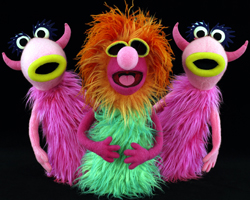 I don't play all that much multiplayer Magic, but when I do, I play Planechase.

There are a number of reasons for this. I started playing Magic when I was eight years old as a way to occupy my time between rounds at chess tournaments, and before long I realized I was looking forward to the Magic more than I was the chess. So I broke into the tournament scene relatively quickly, since that was the environment inside which I had started gaming in the first place. Now, I was pretty awful at first, but I still approached the game from a competitive, one-on-one perspective, and that influenced the way I thought about and enjoyed Magic from the get-go. By competitive, I don't mean "win at all costs"—because, as a nine-or-so year old playing at tournaments full of highly intelligent twenty-somethings, I was certainly not just cleaning house every Saturday. I mean something more about mentality—that I was kind of obligated to try and find the best play possible at every point, even if I failed, and to try and turn off that impulse was to ignore something fundamental about what Magic really was. 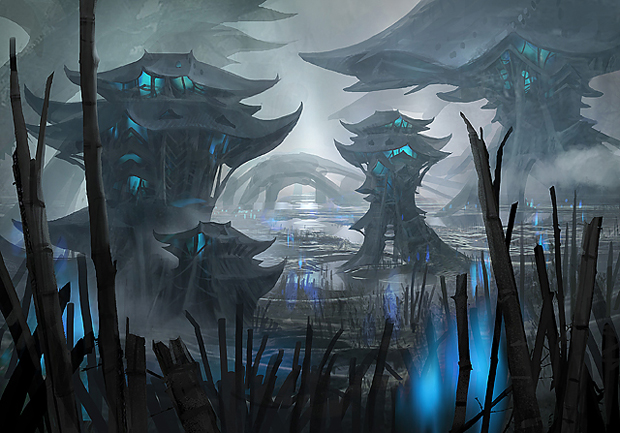 I don't get to play in tournaments any more, but I think because my attitudes toward Magic were cemented into my brain at an early age I have to work to perceive the game through other lenses. Now, being able to do that is part of our jobs as Magic developers, so despite the fact that every one of us has at least one Pro Tour Top 8 finish, we try not to Spike out too hard. Still, it requires some active focus, a kind of switch you have to flip in your mind to say, "Okay, it's really not that important to spend five minutes here trying to eke out every morsel of value you can find."

What I like about Planechase, and why I play it pretty often, is that it gives me "permission" to turn that switch off very easily. The very rules of the game say, "There's going to be a lot of randomness here, and it's going to be awesome, and you might as well realize that before you sit down." Having the game's very mechanics adopt that attitude is really liberating for me, in a sense, because I can just accept that stuff is going to happen that I don't really have much control over, and take that for what it is. Then, when I build a deck, I can focus on doing something cool while relaxing my mind from the obligation to feel like it has to be in control of everything, that it constantly has to push all its resources into eking out an edge. Given that it's impossible to control everything in a regular game, too, this is also probably a very healthy idea, generally speaking.

There is some kind of lesson there.

Anyway, the point of all of that is: One of the things that makes Planechase cool is that it forces you to take as given that high-variance, high-impact effects will be a meaningful part of every game. One of the reasons for that is that every plane has, in addition to its "static" ability, a "Chaos Roll" effect that, usually, does something pretty insane whenever it comes up. Because that only happens on one out of every six die rolls, its effect on the game is typically pretty well-contained.

Well, unless you run into :

The way this works is that when you're flipping cards in the planar deck—someone has just planeswalked—you encounter this guy here. Its effect happens, then you keep flipping to the next card. If it's another phenomenon—well, keep flipping! 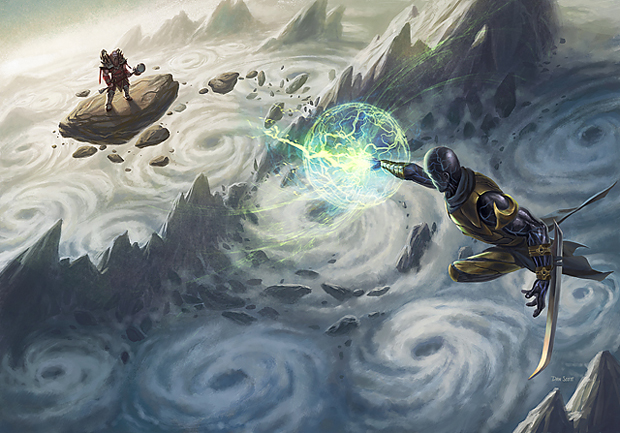 I guarantee you that this card will create memorable games. Wild stuff happens when it's flipped. I've gained 80 life in a turn, put forty-eight counters on a Woodfall Primus, attacked for 212 trample damage, and milled out two players with Cabal Coffers. You've got to get a little lucky, of course, but—well, that's part of why you're playing Planechase!

As you know, every Planechase product comes with some plane cards and a deck of Magic cards to play with them. These decks are designed and developed to be fun in multiplayer and show off themes and mechanics that would be harder to implement in a regular set for whatever reason—power level, game play style, creative treatment, etc. Sometimes, they contain cards we wouldn't typically print in booster packs for balance issues, but function very well in more controlled environments. As an example of what I mean, I designed Karn's deck in Duels of the Planeswalkers 2012 to contain four copies of Mox Sapphire, because in the context of that deck you can control what it can do. Duels is not a standalone multiplayer product, obviously, but I think it illustrates the point that the power level of a card is largely defined by what's going on around it.

I bring that up because of :

Basically, the cascade mechanic can be, as we called it during testing for Pro Tour Honolulu, "Ancestral Lotus Tutor," because it gains you card and mana advantage while digging up specific effects. Three-mana cascade cards are particularly dangerous because, assuming you only play one spell that costs less than that, you can have a TON of redundancy without sacrificing very much in the way of speed. Entire decks were built around the ability to resolve Hypergenesis or Living End on the third turn of basically every game, and while these decks were very linear, they were also incredibly consistent. 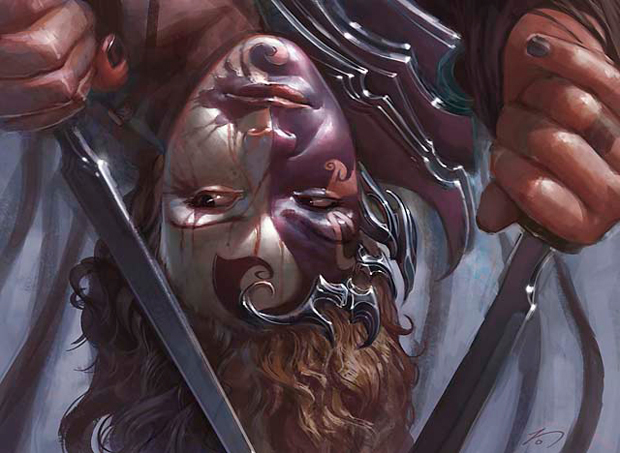 Because of that, we decided to be very conscious of how many cheap effects with cascade we'd ever print, should we return to the mechanic. The problem, though, is that even though cascade can do a ton of broken, totally bananas things, it can also just be a lot of fun in the correct context. It can be high-impact and high-variance and create moments of excitement where you just have to hit the perfect card.

In the case of Shardless Agent, for example, he's this awesome, very-pushed creature that's always netting you advantage for a competitive cost, and because he's an artifact on top of everything else there are a lot of really creative deck building paths you can take with him. Because he's only legal in Eternal formats, though—formats which can handle things like tutoring up Restore Balance or Ancestral Vision or even just your normal everyday Tarmogoyf every turn—we feel comfortable releasing him into the world.

Take It Back Now, Y'all

That brings up an interesting question: how did we get to the point where we realized we wanted to start including new cards in sets like Commander and Planechase?

Standard, composed of only two years of Magic sets, rests at a power level much lower than that of a lot of casual constructed decks. It's easy to see why: the more cards you can play with, the more options you have and the bigger pool of cards you're able to select from to make your deck. Most casual groups construct their decks with a far more relaxed pool of cards—Modern, Legacy, Classic, or (very frequently) no format at all. Under these circumstances, you just have a ton more options, and that pushes a lot of the cards in Standard out toward the margins even outside the context of competitive Magic. 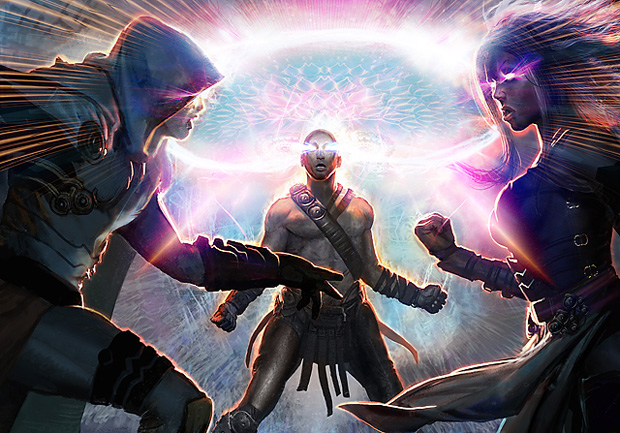 That doesn't mean, though, that we want to stop making cards for this kind of player! The trouble was figuring out how to do that without power-creeping the game. If we simply put more powerful cards into Magic than we would otherwise, we'd enter into an arms race with ourselves that would get out of control.

What we realized was that decks like the Planechase decks are perfect for this sort of card. Because the decks are designed to be playable right when you open the box, we can make sure to kick out things like Hypergenesis and put in effects you'd be more likely to see in normal games of Magic. Then, when players take apart those decks to build new ones, they're entering environments with higher overall power levels and higher degrees of social "rule-setting." This gives us room to create powerful, appealing cards for those formats outside the context of what matters for the Standard environment.

What does this mean for you guys?

Well, each multiplayer release tends to focus on a certain type of player who plays a certain type of format. Commander games, for example, tend to center around big mana and big effects and themes that usually go along with whatever story a particular Legend is trying to tell. This means you can probably expect cards in those products that, while potentially imbalanced for Standard, play very well in that particular context. Edric, Spymaster of Trest is my favorite example of this kind of card. Planechase, meanwhile, will probably feature cards that work well inside traditional free-for-all multiplayer game play. That's not to say there won't be overlap, of course. There will be, and there is. The bottom line is that we've become a lot more comfortable developing new cards for specific environments, with the needs of those environments in mind from the start.

Even if you're not traditionally a multiplayer aficionado, I encourage you to jump into a game or two of Planechase if you can. People had to pull my teeth to get me to start playing, but once I started I really enjoyed it. As I mentioned before, it was kind of liberating, and it creates stories that no other kind of Magic really creates. If you are a player who plays multiplayer a lot, I hope you like the work we're doing to try and make some more goodies for y'all. But the question remains: Is it working? What do you like? What don't you like? How could we do more to make sure the multiplayer crowd doesn't get left behind? Or—more fundamentally—is there a multiplayer crowd at all? Do a lot of people play both kinds of games depending on who's around, and what the playgroup wants to do?

I want to hear about all this, so please shoot me a tweet or an email or a forum post. We want to know how y'all play. Please, tell us!