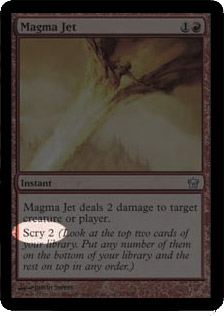 Week, eh? There are very few cards in existence with this mechanic—exactly nine each in Fifth Dawn and Future Sight—and, seeing as Mssrs. Rosewater, Martin, and Flores each went over every single Future Sight card with scry in great detail already, there isn't all that much for me—the guy who invented the mechanic in the first place—to talk about.

Go back and read Mark's Scry Me a River column from the Fifth Dawn preview weeks if you haven't done so recently—it presents a lot of good background information about the mechanic's design and development (as does my follow-up column Red Can Do This? which details the difficulties faced in getting Magma Jet in particular printed). The most relevant section of Mark's old article to today's discussion is the last bit about why scry was keyworded. I guess back when Fifth Dawn was being previewed there was some amount of complaining on the boards that we would make such a lame keyword; hopefully by now people have come around on how useful it is and accept it as a decent keyworded mechanic.

Except for the fact that it is no longer a traditional keyword in the truest sense of the word, but is now a "keyword action."

Eyes of the Watcher isn't a card with scry but rather a card that lets you scry 2 when you play instants and sorceries. Flores rated it last in his list of Fifth Dawn scry cards based on tournament impact with good reason. The card came in from design called "Scry World" doing essentially what it does now, but with slightly different wording that had the scry effect happening as or after the spell that triggered it resolved, not before.

Most keyword that live on spells give the card some kind of additional optional functionality. Flashback means that, if you so choose, you can play the spell from the graveyard. Cycling means that, if you so choose, you can discard the card and draw a new one. Entwine means that, if you so choose, you can pay extra mana to play both modes of the spell. And so on. But scry is a mandatory instruction that you follow as the spell resolves, just like any other bit of rules text that explains what the spell "does." It occurs each and every time the spell resolves and at no other times. It is basically just game text; if it appeared first on the card you'd do it first, and if it appeared last on the card you'd do it last. But in order to make it a keyword, it had to be written up as a "static ability that functions while a spell or ability is resolving."

Editor Del Laugel and then-Rules Manager Paul Barclay had issues with trying to splice text onto spells that were on the stack (this was in the days before the "splice" mechanic existed), and tried several different wordings on the card, none of which read well. (To quote Brady Dommermuth's Multiverse comments on the card, "This isn't really going out this way is it? It reads like Chinese water torture must feel.") Fifth Dawn lead developer Brian Schneider decided to kill the card from the set at one point because it just wasn't coming together.

Prior to the cutting of the card, an iteration of the Fifth Dawn file had been sent to a group of out-of-house German casual playtesters that we used for quite a number of years, and when their comments came back, we were all surprised to see "Scry World" at the tops of their lists of cards they liked. So Brian recanted on his cutting of the card and slid it back into the set, and suddenly Del and Paul were on the hook for making it work in the rules and still be readable.

Their solution was the wording on the printed card:

Whenever you play an instant or sorcery spell, you may pay

That wording does not exactly match design intent (which was to have you scry after the spells you played resolved), and it does not splice text onto instants and sorceries, but it does read cleanly. The weird thing about it, though, is that is uses a keyword as a verb—a game action—which is something we hadn't done before. There were some complications with the card in foreign translations, as keywords don't necessarily have to be verbs in other languages, but suddenly we were using it as a verb.

Of course, Future Sight design wanted to use scry less as a traditional keyword and more as a verb, as an action you can perform at various times and in combination with any number of other abilities, similar to how "regenerate" and "sacrifice" work as complicated terms with very specific game meanings that appear in sentences on cards.

When Llanowar Empath comes into play, scry 2, then reveal the top card of your library. If it's a creature card, put it into your hand.

Treating scry as a simple keyword would no longer be possible, as it is now fully embedded in card text. Many discussions were had between templating teams, editors, developers, and current Rules Manager Mark Gottlieb, wherein all "verbs" that have very specific game terms, including the aforementioned "regenerate" and "sacrifice," were analyzed, all of which led to the formal creation of a class of terms called "Keyword Actions" which now reside in the Comprehensive Rules in section 501 as of the Future Sight update.

From the Comp Rules:

Most actions described in a card's rules text use the standard English definitions of the verbs within, but some specialized verbs are used whose meanings may not be clear. These "keywords" are game terms; sometimes reminder text summarizes their meanings. 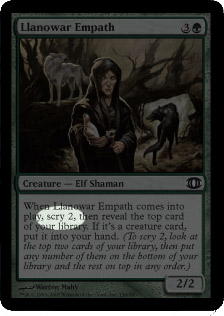 These special words are keywords in the sense that they need some level of explanation to understand how they function in the game, but they are unlike most other keywords in that they are (generally) used as verbs inside longer rules sentences. The full list of keyword actions is:

As these are not traditional keywords, they can't ever stand alone on cards. No card has "regenerate"; instead, regenerate appears as a verb in "

" do. And if you look closely at the Oracle wordings for the Fifth Dawn scry cards—and I mean very closely—you'll see that it doesn't stand alone anymore. Each one of those cards has had a period added to the end of the line that says "Scry 2," changing scry 2 from a keyword into a sentence of instructions.

And to put my own period at the end of this column, I leave you with this: Lorwyn will be adding a saucy little keyword action to the list, mark my words.

We have a cycle in mind as one we'd like to revisit—hopefully someone will remember to check back on these results when that day comes to see if your prediction matched reality.