oday is the end of the first week of Magic 2011 previews. Just like Magic 2010, about half of the cards in Magic 2011 are completely new to the game. Unlike Magic 2010, Magic 2011 contains a non-evergreen keyword mechanic: scry. This is the first time we've done that, and today I'll talk about why we did it here.

At this point, you might be wondering why I'm talking about this in the development article. This sort of thing normally sits in the design slot, as the choice of keyword mechanics for sets usually comes out of design. In the case of Magic 2011 and scry, however, it didn't. As Mark Rosewater mentioned in his article this week, I was on the Magic 2011 design team. We spent a few weeks talking about big picture issues, then a few months making cards and putting together colors. When we were done with that, we took our scry-free set to its lead developer Erik Lauer and asked him what he thought.

Overall, Erik was pleased with what we had made. His background in traditional fantasy gaming made it easy for him to love the Titans, and the rest of the set was classic core set Magic with plenty of appealing new cards. Erik's main worry with the set was that it played a little too similarly to Magic 2010. Magic is the most fun when it changes over time, and he wanted to ensure that there was enough change in the experience of playing Magic with the core set from year to year. Erik's suggestion to deal with this was to add a simple keyword that could be put on flavorful cards. He even had a helpful suggestion about which keyword to use!

We try to have an overlap of one person between the design and development teams of any given set. For Magic 2011, that was me—so I was privy to all the discussions the team had with Erik about why and how he wanted to use scry. It's been a while since then, though, so I don't feel comfortable telling you what Erik's exact thoughts were. Instead, I will tell you the reasons why I am happy that we used scry.

One of the things I love about Magic core sets under our new model is that the majority of the cards do a great job of standing on their own. When you look at, for example, Mitotic Ooze, everything about the card fits together, including the name, the art, and the text box. Although I was the one who submitted that card during design, I am told that the same card has been submitted by a handful of other people. That me and those other submitters all agree on what an ooze is supposed to do is indicative of why the card works as a whole package. 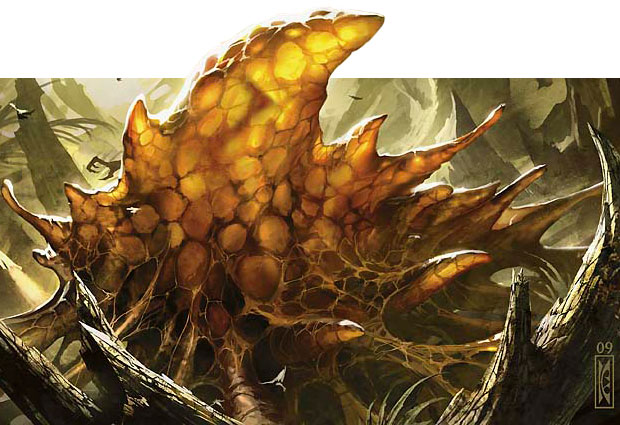 Not every Magic card can be as perfect as Mitotic Slime at matching mechanic and concept, and in fact Magic needs cards that aren't as perfect in order to be fun. For example, it's hard to say exactly what having kicker or a landfall ability means creatively. That's fine; there's nothing wrong with Steppe Lynx or Burst Lightning, and we'll keep making cards like that. However, the hallmark of our new core sets is spot-on baseline fantasy flavor, and extra text that doesn't improve the match of flavor and mechanics would only get in the way. 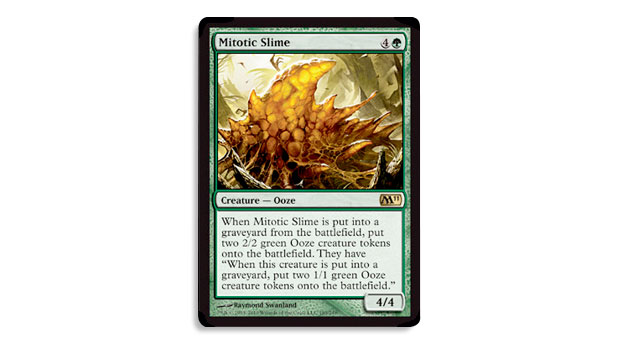 Happily, scry doesn't have this problem. The specific act of scrying is exactly the sort of thing that you might expect a magic-user to do, and it's not much of a stretch to put the word on other concepts that involve looking into the future. It may be a keyword mechanic that has never been in a core set before, but its flavor match makes it a perfect fit for a core set. 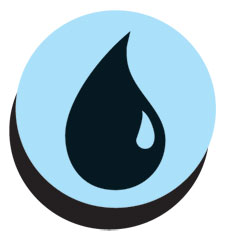 One of Erik's favorite things to do with his sets is make each color play differently in Limited. He knows that Magic's endless variety is a huge part of its appeal, and making each color feel different and unique lets us put more variety into one Limited format. You can draft white-blue in Magic 2011 one day, then draft black-green a day later and have totally different games. A second benefit of each color having a distinct feel is that a player who likes playing Magic a particular way is more likely to find a color that lets him do that. Both of these things are part of why Magic can be fun for so long and for so many different people.

You might be a little confused right now about what this has to do with scry. In Fifth Dawn and Future Sight, scry appeared on cards of all five colors. This is not the case in Magic 2011. As I talked about before, we didn't randomly write scry on cards that didn't have it before and call it a day. Instead, we looked for the fantasy ideas that it made sense to use scry to express, and made those. As it turns out, scry works best on cards that represent looking into the future, and looking into the future is solidly in blue's realm. Therefore, most of the scry cards in Magic 2011 are blue.

Erik had already followed that chain of logic through when he suggested scry, and knew that it would give him a way to differentiate blue from other colors. If you are the kind of person who likes controlling the future and manipulating the cards on top of your deck, then I suggest playing with blue at your Magic 2011 Prerelease. Of course, the fit between blue and scry was already pretty natural, as the sort of person who values the ability to scry is quite likely to already be drawn to blue's card drawing effects. Overall, it was a perfect match.

The Magic 2011 Visual Spoiler contains several cards with scry. I'll talk briefly about each of them, then introduce today's preview card.

A month ago, I told you that Divination was not in Magic 2011. The addition of scry made it obvious that we were supposed to cut Divination for Foresee. Foresee is a reprint, but it easily clears the high bar that a preexisting card must jump over to get into a core set. It has a great name, a text box that does exactly what it sounds like it should and nothing more, and art with a great visual pun. We didn't need to make a new card here, so we didn't. 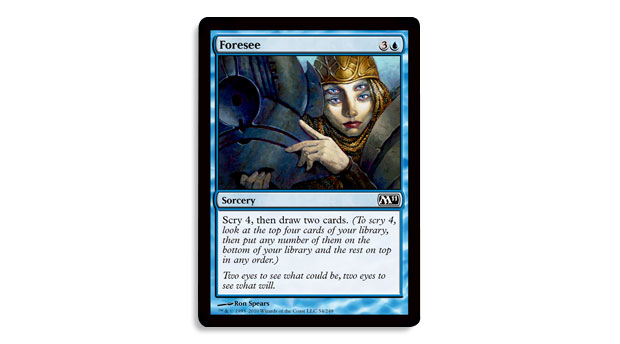 The previous attempt at this kind of card was Fifth Dawn's Serum Visions. In hindsight, Serum Visions is kind of a dumb card, since it doesn't do the things in the order you want. Why would you draw a card before you did the scrying action? The whole point is to control what you draw, and it makes more sense to start now than to have to draw a random card before I get to select my cards. Serum Visions is also not a great name, as we aren't always on Mirrodin. Here, we exercised our ability to make new cards and printed a new card with the right mechanic and a better name. 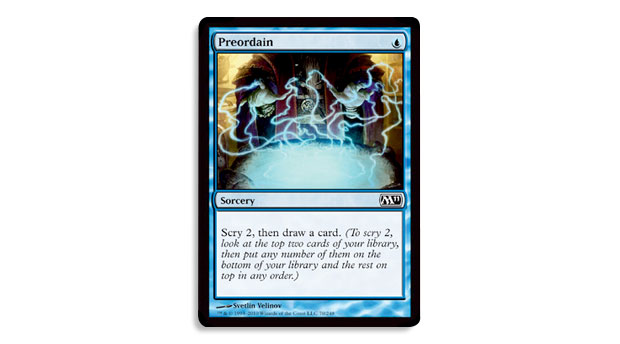 Sage Owl is a subject of some debate among people at Wizards. Focus groups have shown that very new players adore it. There are also several people here who think that the feelings of hopelessness it inspires when a more experienced player plays it and sees nothing useful are not worth the price of admission. Augury Owl is intended to be a Sage Owl that everyone can love; it is all of the appeal with none of the potential hopelessness, as you can just dump the bad cards on the bottom of your deck. This is a subtle card, but it is quite potent. I enjoyed watching its stock continue to rise as we played Magic 2011 Limited. 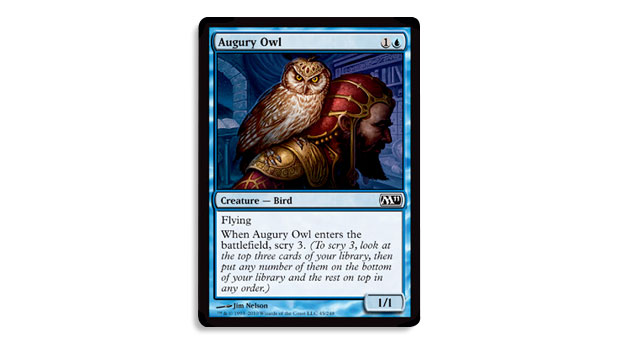 Crystal Ball is, well, a crystal ball. Sometimes a card just speaks for itself. 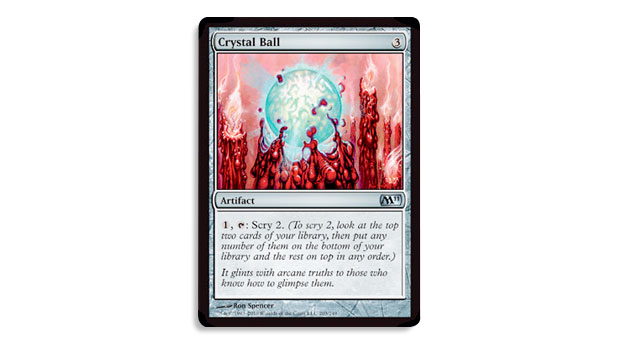 And finally, here's my preview card. 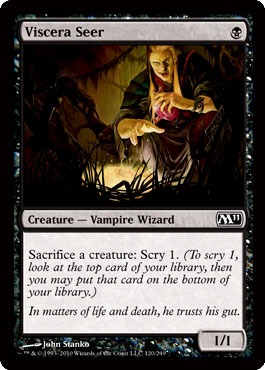 Wait a minute. This card isn't blue. What gives?

Aaron Forsythe was the lead designer of Magic 2011. He liked the idea of putting scry into the set, but he wanted to make sure that we used it everywhere we could. Erik was right that the most obvious cards for scry were blue, but Aaron wanted to look elsewhere. He led the design team in a pass to look for non-blue creative concepts that could be represented by scry. Most of them were stretches, but the idea of sacrificing a living being and using its innards to learn something through arcane means hit us pretty hard. It also struck us as being black. This card is the result.

There are plenty of things to do with Viscera Seer in Magic 2011 Limited. Sacrificing creatures for a small effect normally isn't great, but doing it in response to a removal spell is a lot better. You can also use it with token creatures. Going all the way through a Mitotic Ooze, for example, will put you seven cards closer to whatever you are looking for. Reassembling Skeleton can even come back over and over again to keep being eaten. In Constructed, you should note that Viscera Seer is a Vampire and happens to work quite nicely with Bloodghast.