A Set in the Life

ne of my favorite kinds of columns to write is the mass Multiverse dump. Working at Wizards is a joy because of the rewarding work we do and the amazing people we do it with, and Multiverse both shows how much fun we all have together and gives you a behind-the-scenes window into how we think about Magic. When I do this, I usually try to find some kind of story to tell. Maybe I just pick all the funniest comments, or I talk about the commons from a set.

Magic 2011, however, vexed my efforts to find a theme. Although Magic 2011 is one of the sets that I'm most proud of since I started working at Wizards, I couldn't find a common thread to the interesting stories. We make lots of Magic sets, and the process that led to this one being finished wasn't particularly unified in theme. Therefore, I just grabbed all the comments that I thought I could say something about, and I'll say a little something about each of them.

Here is a key to the people you'll read today.

Mark Rosewater once talked about R&D card codes. As Aaron tells you here, this card's code was CW01: C for common, W for white, and 01 for being the first card in the file. Could Goldenglow Moth have any other code?

As Doug Beyer's 6/17 comment indicates, this card once worked like Llanowar Sentinel. That causes a lot of waiting as you build up enough mana to get multiples of them, and it also asks you to remember how many of them you have in your deck so that you don't accidentally overpay. Neither of these things are ideal, so Doug's suggestion is logical.

Unfortunately for Doug's suggestion, both Aaron and Erik have distaste for excessive shuffling in Magic, and his suggestion would have required a shuffle every time a Squadron Hawk was played. The compromise between what Doug wanted and what Aaron wanted was to just let you put all of the copies in your hand right away.

This almost worked out the way we wanted to, but not quite. Often, you want to play a Squadron Hawk on turn two, at which point getting all three of the first one's friends would put you over seven cards in hand, forcing a discard. My favorite gunslinging deck at the past few events I've traveled to has been a green-white deck with four Fauna Shamans, four Squadron Hawks, and only one each of any other card, so I've had this happen to me plenty of times. In the Future Future League, we have used this as a way to sneak Vengevines into the graveyard, but in other contexts we have foiled Aaron's plan by only getting as many Squadron Hawks as we can hold, which means extra shuffles. Oops.

Del 8/7/2009: After playing with and against this, I think the ability should say "that player *reveals* a card at random from his or her hand."
MM 8/13/2009: As per above, do you want everyone in the game to see this card ("reveal") or only the controller of Merfolk Spy ("look")? Also, is this ability mandatory or optional?
EVL 8/13/2009: Reveal is better, mandatory is better to save communication time.

We think about every card we make, even if it isn't powerful. We have empirical evidence that every card we print will be played in Constructed, so they all need to be fun to play with.

It had been a long time since any of us had played using scry in Limited when we put scry into Magic 2011. Another wrinkle in our evaluation of scry is that both Mirrodin Block Limited and Time Spiral Block Limited were fast formats. Magic 2011 is faster than Magic 2010, but it's nowhere near as fast as Mirrodin or Time Spiral. Because of this, scry surprised us with its power to sculpt longer games.

Sage Owl gets a bad rap around Magic R&D for the feelings of hopelessness it can cause, so we were happy to try a new design. We did not expect it to be awesome, but we thought it was cool when we discovered how good it was. Crystal Ball surprised us in a similar way, as we thought it was just an innocuous adorable card, but our evaluation of it kept going up and up. We were pleased to discover that our initial evaluations were wrong, though, as that indicates that there is plenty to be learned while playing the set.

Harbor Serpent is one of my favorite cards that I've designed. I submitted it as "Sammy the Sea Serpent", and that is what it will always be to me. You can see that Ken Nagle and I disagreed early on about how good this card is, but by the same logic I talked about on the previous card, that's good! If we all agreed on everything, it would mean the set was too easy to figure out.

Every time one of my opponent's Berserkers of Blood Ridge runs into a Rotting Legion, I am pleased that Aaron did this, even though none of the cards that anyone mentions here are still in the file. This kind of tweak is a testament to just how much we can do with numbers to sculpt game play. Rotting Legion is good against red in Magic 2011 because it is safe from Berserkers of Blood Ridge and Chandra's Outrage, but less good against green because of Spined Wurm and Greater Basilisk. None of these cards are individually complicated, but you get the puzzle.

To get the full effect out of Erik's comment, imagine him saying it with utter earnesty, an exaggerated smile, and a twinkle in his eye.

In all seriousness, though, developers do love these kinds of cards, as they can catch crazy mistakes. Vintage, Legacy, and the Extended format from 2008 would have been much worse without this card, as no other card has stepped on Dredge decks so effectively. This is also why we keep making cards like Negate and Duress.

I don't tend to get attached to things in the ways that many other people do. Despite this, I was quite jarred when I saw Act of Treason at common. Threaten, Ray of Command, Grab the Reins, and every other card like this that I had ever seen had been uncommon, including Act of Treason. Even weirder—increased access to Act of Treason made me appreciate it less, as there were plenty of decks that I wasn't interested in playing it in.

What turned me around was how much texture it added to the format. First, we built in several ways to get rid of an Act of Treasoned creature, like Bloodthrone Vampire, Viscera Seer, and Fling. Second, people like Mike Turian who like crazy beatdown decks in Limited would snap these up and just kill me with them and my own Spined Wurms. The card is clearly not for me, but I'm glad that Aaron had the vision to move it down.

AF 6/19/2009: Damage no longer stacks! Hooray!
AF 6/19/2009: Barbarian Lunatic my ass.
KEN 6/24/2009: I like the choices this smart red card offers. Zero-mana activation might be debilitating against too many enhancers (Rancor, Holy Strength), maybe R to use.
TML 6/29/2009: I have enjoyed this card. Smart red cards are what it takes to make me like red—things like Grim Lavamancer are my favorites.

Here's a fun subject we haven't talked about in a while. Combat damage once went on the stack. That meant that you could, for example, use Mogg Fanatic to kill two toughness creatures in combat. This was embarrassing to explain, so we got rid of it. For a while, we didn't make Mogg Fanatic-like cards because the rule had changed so recently and we didn't want things to be confusing. That time is over, and at the beginning of Magic 2011 design Aaron was a man on a mission to make good creatures with sacrifice abilities. This guy and Viscera Seer are two outcomes of that mission.

Many people don't know that, when destroyed, tokens go to the graveyard briefly before they disappear into the void forever. This confusion often occurs with cards like Grave Pact. Hilariously, I've never seen anyone get this one wrong, as people tend to assume their cards worked. Although Del's idea is noble, I'm not sure we actually taught anyone anything. 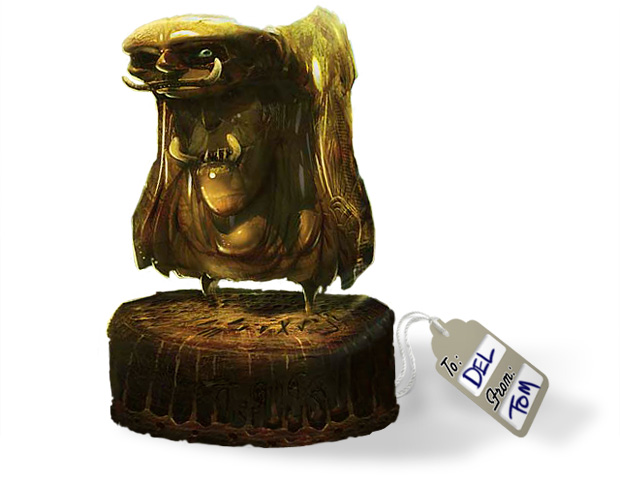