've been involved with Magic one way or another since I was eleven years old. Until a little over three years ago, that involvement looked much like most people's. As a child, I mostly played on kitchen tables, although my occasional forays into local tournaments gave me a taste of what was to come. Later, I began to consistently draft twice a week at the closest store. That led to traveling for Pro Tour Qualifiers, then for Grand Prix, and finally for Pro Tours.

The break in this pattern happened when I walked into the Wizards office building. Now, I go there to work, and then I mostly leave and do things that don't have anything to do with Magic. This is what life is like for many of us who work at Wizards.

The obvious danger of this is that we can lose perspective about what it is like to play Magic in the real world. We recognize this danger, and we each fight it in a number of ways.

We Go to Tournaments

The best way for us to regain perspective on what it is like to play Magic is to find large collections of Magic players and hang out with them. By far the most convenient way to do that is to go to large tournaments.

It is often easy to find R&D members at the Pro Tour. We like seeing what the best players in the world do with our cards, as many other players imitate Pro Tour results when working on their decks. We also like having personal relationships with some of the game's top players. They have many of the same incentives to make Magic awesome as we do, and we've found that they often keep us abreast of developing problems.

However, that's not the only reason we go to the Pro Tour and other large events. For years, at any given Pro Tour there has been a booth where you can find and play Magic against various R&D members. That booth has gone by many names—gunslinging, champion challenge, spellslinging—but the purpose has always been the same. You all like meeting us, and we learn from interacting with all of you. This is especially valuable at events held outside North America, where we always learn new things about our international audiences. Pro Tours are becoming private events where we'll only be able to fulfill the first of those goals, so I expect that you will still see us at other large events when the opportunity arises.

I have also made a habit of going to low-level tournaments whenever it is convenient. The closest store to Wizards is Shane's Cards and Comics, which happens to be right next to a Vietnamese restaurant I like and a Japanese grocery store that I sometimes need things from. Every once in a while, I make a trip out of stopping by those three locations on a Friday afternoon in order to take the pulse of Renton's Magic community. That gives me a nice window into the more casual side of our tournament-going audience, as well as a good chance to chat with the store's owners about how business is going.

We Play in Tournaments

While attending tournaments as a guest is nice, there's still nothing quite like attending them as a player. The last-minute scramble for the right sideboard cards, the rush of the crowd toward the pairing boards, and the tension as my opponent and I shuffle up for a game are all part of Magic and most properly experienced from the inside. Wizards employees are not allowed to play in sanctioned tournaments, so we don't get to do this very often, but I try to do it whenever I can. This is, of course, partially because I love playing in Magic tournaments, but it is also good for research purposes.

Earlier in my career at Wizards, there were occasionally large unsanctioned Standard tournaments held in downtown Seattle. I played in as many of these as I could get to, with some success; in 2009, I won a side event for a Nintendo DSX. Lately, the opportunities I've had have been in larger formats; I played a Modern event at Card Kingdom's flagship store before Modern was sanctionable, and I have played two Legacy tournaments since then at Mirkwood Cafe in Arlington. I had fun at all of these, and each time I learned something I didn't know beforehand that has helped me in my work.

We Play on Magic Online

Magic Online is another great way for us to interact with players. While in-person interactions with the public are great and I would never want to give them up, playing on Magic Online has its advantages. One is that in person many people know who I am, and are therefore deferential and polite due to my perceived status advantage. Online, the only indication of who I am is a little Wizards logo next to my name; I thought this would be a dead giveaway, but it seems that many people don't notice it. That means I am treated exactly like any other random person would be.

What does that buy me? In person, most people want to show me a good time so I think of them fondly. They don't play decks intended to lock me out of the game or blow up all my lands, and they don't tell me that my deck sucks and that I am stupid and I am lucky and to die in a fire. Because of this, I worry that we often get a rosier picture of Magic from our in-person interactions than is accurate.

On Magic Online, no one has to look me in the eye when they are done playing against me, so things are a little different. No one seems to have any compunctions about Wastelanding and Stifling me out of a game, or killing me with Tendrils of Agony on turn two, or blowing up all my lands with their Liquimetal Coating / Tuktuk Scrapper Allies deck. They are also sometimes rude to me during games, especially if I beat them with something weird. While these are not generally things I like, I am glad that I have a venue to experience them, as the true Magic experience sometimes includes them.

There is, of course, a brute-force method that we sometimes use, and that is bringing new talent into the building. Every time a new hire starts, that person brings a different perspective with them. At the very beginning, that perspective comes from the real world, and that is one of the important things we get. Combining all of those perspectives over time is how we build a picture of the outside world.

One of the interesting things about this is that none of our perspectives are complete pictures. When I was hired, I was a strong enough player to be qualified for any Constructed Pro Tour I wanted, but I had to qualify each time. Most of my colleagues at the time were stronger Magic players, but none of them had spent as much time grinding in the Pro Tour Qualifier trenches as I had. That gave me a different perspective on Constructed formats than many of them had, and gave me a unique voice. On the other hand, without Erik Lauer's crack deck-building instincts and Mike Turian's Pro Tour veteran experience, we would not have had enough variety to see everything we needed to see.

More recent additions to the Development team include Zac Hill, who has played several Pro Tours and spent lots of time playing Magic during his time living in Malaysia; Dave Humpherys, who is in the Pro Tour Hall of Fame and brought us several years of experience working on other trading card games; and Max McCall, who loves nothing more than finding the best thing to do in an environment and then doing it over and over again until it stops working. Our most recent additions are Pro Tour Los Angeles 2005 finalist and imaginative deck-builder Billy Moreno and new development intern Gavin Verhey, who is at the time of this writing only two days into his time here. I don't know what Gavin's voice will be, but I can already tell that it will be different from any of ours.

On a side note, if you have ambitions of being the next voice we bring in, I suggest you read The Great Developer Search. Gavin will not be the last development contractor we bring in, and with some work you could be the next one.

We Are Available on the Internet

If you look around, it's not hard to find ways to communicate with many of us. Every article we write has a "Respond via email" link; while we don't have time to respond to everything we get, as far as I know each of us reads every email we receive. Many of us are more public than that. Mark Rosewater has never met a social media he didn't like, and is very active on both Twitter and Tumblr. Zac, Gavin, and I are also both around on Twitter a good amount. 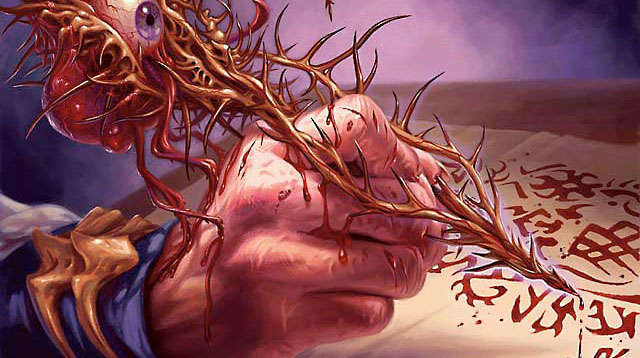 While this is an easy way to find us, we also have to be careful while interpreting this. The kind of person who finds us on Twitter tends to be highly enfranchised in whatever mode of play they like. Tournament players who tweet at us tend to be extremely active and willing to travel several hours to play, casual players who tweet at us tend to have tons and tons of cards and have been playing for years on end, and so on. That means that some of those people have developed very specific perspectives on the game, and we have to make sure we view extreme statements made by such people as though they may have come from a specific perspective rather than a broad one. However, this is one of our best ways to get feedback from those groups, and I value it.

Overall, I've been satisfied with the cumulative effect of all of these methods. We'll never have a perfect picture of the Magic world, but that would be nearly impossible to get through any means. For now, we make do with this.