Posted in Latest Developments on March 25, 2011

little over seven years ago, then-Latest Developments author Aaron Forsythe wrote an article entitled Skeletons in R&D's Closet. In it, he shared Multiverse comments that developers left on some of Magic's most famously broken cards: Survival of the Fittest, Oath of Druids, Tolarian Academy, Yawgmoth's Will, and others. Here's how he ended that article:

Of course, nobody's perfect. I'm sure ten years from now a new group of developers will look back at some of the cards we've made in recent years and say, "What were they thinking?!" I just hope they don't write an article about it.

We'll start with an appetizer. Thirst for Knowledge is hardly the least offensive of the cards in this article. Despite that, it saw heavy play through all of its lifetime in Standard and Extended, and was powerful enough in Vintage thanks to the Moxes that the DCI chose to restrict it when Mana Drain decks were a dominating force. Let's see what R&D said about it before it was printed. One note: In this example and throughout the article, I've changed the initials of those involved to D1, D2, etc. to protect their identities. I still work with some of these people, after all…

D3 9/12 It is actually a really good card drawing card with the artifact lands.
D4 9/14 Agreed, this is card drawing, not filtering

I'm glad they figured that out, at least.

Compared to the rest of the cards here, this one probably seemed just fine.

Disciple of the Vault was one of two key cards that fuelled the artifact attack deck that dominated Standard soon after Darksteel released, which was popularly called "Affinity" even though the most powerful cards in the deck lacked that keyword. When you can play 45 artifacts in a 60-card deck and a bunch of ways to sacrifice artifacts at will, this card was frequently a one-mana double Lava Axe.

R&D likes pondering hypothetical questions. One of them is what single Magic card we would go back in time to remove from Magic forever. Disciple of the Vault is the third most common answer from developers. (The other two will appear later.)

Let's see what the Mirrodin developers have to say for themselves.

D1 10/15: new card, needed a cheap creature and thought it would be cute to mirror the new white soul warden

I am certain that the aesthetic benefit of mirroring Leonin Elder and Disciple of the Vault at one mana weren't worth the players we lost to the deck this change spawned.

We now have found our first card with the actual affinity ability. How much discussion was there about this creature, which is potentially a zero-mana 2/2?

1) This card's potential cost of zero is also as Spikeriffic as it gets.
2) The level of artifact creatures is high.

Let's pause for a moment to appreciate how difficult affinity is to deal with as a developer. We have learned that cards that are powerful but read poorly are a great recipe for getting bad initial buzz about a set. We have also learned that keyword mechanics that are much stronger than they look create cards that read poorly. Affinity is one such mechanic, so the developers were under some awkward pressure to find exactly the right balance between appropriate card power and cards that are appealing to read. That's not a great spot to be in, and I don't envy their position.

Goblin Charbelcher looks like a cute and goofy card. In reality, it's a little bit of a monster, enabling Extended combination decks that won on turn two or three at Pro Tour New Orleans in 2003 by casting Mana Severance. You can also win on turn one or two in Legacy and Vintage by playing one or zero lands in your deck thanks to those formats' copious fast mana. There is exactly one comment on the card. Let's have a look:

I have more sympathy for this card than any other in this article, as it's hard to test cards like this. It even did some things in Standard that were kind of cool. Still, we do our best these days not to create cards that can make Eternal formats even more high-variance than they naturally are. I'm not sure whether we'd let this one go today.

And now, we come to the artifact lands. These interact very powerfully with affinity cards, for which they serve as lands that make two mana. These also interact powerfully with cards like Arcbound Ravager, Atog, and Thirst for Knowledge that require artifacts as food. Normally, the requirement that one play enough lands to cast one's spells would keep one from playing too many artifacts, but with artifact lands in the mix the sky was the limit. Ravager Affinity decks, for example, commonly played 45 artifacts. This made Arcbound Ravager and Disciple of the Vault much more powerful. The artifact lands eventually found themselves on the Standard banned list, a fate shared by few other cards. 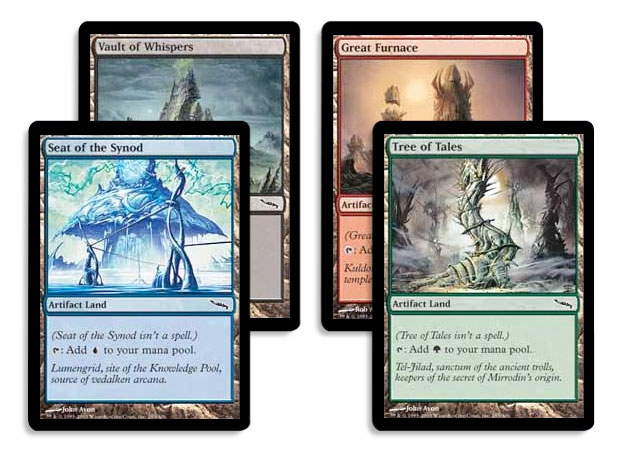 The following is the entirety of the Multiverse comments all five lands.

D2 11/13: These will be in land frames with the same colored text boxes that our other mono-colored nonbasic lands get

Ah, that clears everything up.

Here's the second most common answer to the "What card would you use a time machine to remove from Magic" question. This card is not my answer, but I think it's a reasonable one, as it's bad news for a format when a colorless card is this powerful. Regional Championships in 2004 were dominated by three different decks: Ravager Affinity with Skullclamp, Goblins with Skullclamp, and an Elf-based Tooth and Nail deck with Skullclamp. Fewer than one fifth of the people who qualified for Nationals that year at Regionals did so without a set of Skullclamps in their main deck. Skullclamp soon found itself banned from Standard and Extended, and it was also decided that the card was too powerful for Legacy. Let's see what the developers had to say about it.

...as well as many normal decks.

So will Merfolk, Goblins, Arcbound Ravagers, and Extended banned lists.

Here's a card that is deceptively powerful. Mana is one of Magic's core resources. Cards that give you lots of fast mana are often broken. Normally, those cards enable spell-based quick kills. The developers likely thought that this card was safe, as the fast mana it provides you can only be used to play creatures, which are harmless. As it turns out, that's not quite true. This was a key piece of the most powerful versions of Ravager Affinity, even though those decks didn't often advance Aether Vial past two. Goblin decks did a better job of using it to its full potential, often bringing it all the way to five mana to enable free Siege-Gang Commanders. The card is still played in Legacy with Goblins and Merfolk, and it's powerful enough that it was banned in Extended before Pro Tour Los Angeles in 2005.

And now, the winner. This is the most common answer we have to the time machine question. It's the star of the Ravager Affinity deck that ran roughshod across Standard for a year, hand in hand with so many other cards in this article. As you can see, the card was popular with developers, but this was before a significant change was made to the card. (Note that "chimera" was the playtest name for modular.)

This may be the single most costly Multiverse comment ever made.

I mentioned Trinisphere last week as a card whose impact on Vintage we should have thought about. Winning the die roll and casting Trinisphere on turn one with Mishra's Workshop can really screw up a game of Magic. Someone on the receiving end of that can't cast their Moxes or anything until turn three, and by that point they are likely stuck underneath a Tangle Wire, sacrificing permanents to a Smokestack, or getting beaten down by a Juggernaut. That is not a recipe for good Magic. Trinisphere has done some noble anti-combo work in formats like Extended and Legacy, but I think that wasn't worth the cost to Vintage when we could have just made a different anti-combo card instead.

D1 2/11: I like D2's orignal intent for this card, which was to hose people who build competitive decks so my fatty deck would have a better chance. I say drop the cost so Timmy can have his revenge on Spike.
D3 2/20: this card seems dumb. It's something like "flip a coin and if you win you have a Nether Void" but the people who don't like coin flips don't like Nether Void so no one is happy and people subjected to it are miserable.

Skullclamp was banned before the Mirrodin Block Constructed Pro Tour Qualifier season. Despite that, Affinity was still easily the best deck in the format, largely because of this card. No longer able to draw a million cards to find a Disciple of the Vault, instead Affinity decks had to settle for giving creatures +11/+0 for three mana. Let's see what R&D had to say about that.

Interesting? What do you have in mind?

Really. Are you sure that's a good idea?

Some of you may not have been around for the heyday of all of these cards. I was nearly the state champion of Ohio in 2004, and the deck I played to that 2nd-place finish was a good example of the sort of deck that people were playing at the time.


A full 38 of the 60 maindeck cards were mentioned in this article, which is about famously powerful Magic cards. I am pleased with 18-year-old Tom's ability to choose decks.

Here's another card I consider regrettable, although not cataclysmically so. This card, when combined with Strip Mine or more commonly Wasteland, has the ability to ruin perfectly good Eternal games. This happens with great regularity in Vintage and Magic Online Classic, in which one can use the aforementioned Mishra's Workshop to cast a Crucible of Worlds very quickly. Let's see what comments there are.

There are some mitigating factors on this card. It was the winner of a contest that was accurately named You Make the Card. Because the public built the card from the ground up, the developers likely wanted to avoid making the card unplayable. Unfortunately, it had very little impact in Standard and has done unfortunate things in other competitive formats.

Hrm. I got to the end of Mirrodin, but I'll let you in on a secret: none of the above comments were actually from Aaron. That hardly seems fair. Hold on a moment.

Well, that was fun. I sure hope I never get skewered in an article like this one seven years from now, though. That would just be embarrassing.

Posted in Latest Developments on March 25, 2011