Posted in Latest Developments on June 8, 2007 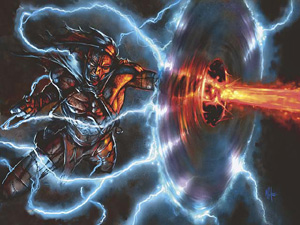 Place, one of Magic's top developers, recently returned from a week-long trip back to his hometown of Kansas City. Usually whenever one of us is away from the office for any period of time, we try to find someone that plays Magic—someone we normally wouldn't talk to about the game, either at a local store or tournament, or just reconnecting with an old friend—and talk to them about the game and how they experience it. Often times what we hear is wildly different from what we think (or sometimes hope) to hear, but we take it all very seriously, and always download all of the feedback to the crew back at the office. I find the viewpoints of people that play the game but aren't patched into the network of Organized Play and various Magic websites that we're all so used to very fascinating.

Anyway, Matt, while home, was introduced to a friend of a family member, and that person played Magic with a bunch of other kids at his high school. Matt asked him if they ever played multiplayer, and the kid just kind of looked at him for a moment before answering that that was the only way they ever played. He then asked what his favorite sets were, and the kid said Invasion, Odyssey, and Onslaught. A reasonable answer, but there's a high chance that those are simply the sets from which the bulk of his collection is made. Matt them asked him what he thought about newer sets like Ravnica, and the kid just shrugged and shook his head. "I don't like them. They make the game too easy—I liked it better when you had to work to kill your opponent."

I'm guessing that he has recently run afoul of some big, powerful effects from recent sets—anything from Kokusho, the Evening Star to Ghost Council of Orzhova to Kaervek the Merciless—and his decks have a hard time dealing with them. Of course, that raises the question within R&D: If cards like those lessen that kid's enjoyment of the game, are they good for Magic as a whole?

I often think back to my own casual multiplayer days when I'm trying to channel the less-connected player, and I can vividly recall two opposite events from my formative early weeks at the local card shop and student union gaming sessions. The first is the day my giant pile of red and green cards ran into a Stasis / Serra Angel deck for the first time. The card Stasis totally blew my mind—I had never seen it before, and I couldn't fathom just how much it neutered my entire deck and style of play. It reduced me to the role of helpless observer within the game; I simply stared at the contents of my hand and waited for death—not fun at all. Similarly, I can recall the group game I was playing in when I first caught sight of Sol'kanar the Swamp King (in his pre-Demon days, before both Time Spiral and Chronicles). The card not only looked amazing, but it seemed totally incredible in play—it was huge for its cost (in those days), it was unblockable against a large percentage of the table, and it had a life-gaining ability that worked wonderfully in the group game. The card didn't do all that much in the game—probably gained the guy 4 life via his ability and then another 5 when it was solved via Swords to Plowshares, maybe doing 5 or 10 damage along the way—but it really made me smile, made me envy the guy who owned it, made me want to keep playing.

Unlike Stasis, of course, which made me dislike the guy who played it and wonder if I was in over my head with Magic.

The point is that Stasis and Sol'kanar are each, in their way, jaw-dropping cards, but what happens once all the jaws are back in place and the game goes on? Are people enjoying themselves or not?

The truth is that Stasis isn't for that casual fun audience. The card poses a puzzle for Johnny to solve, and once he figures out to play it with Serra Angel and/or Kismet and/or Reset and/or Despotic Scepter and/or Gush and that strategy proves itself to be powerful, the card becomes the property of Spike to be used in tournaments. After Stasis becomes known as the centerpiece of a potently miserable tournament-winning deck, it should rarely surface at the casual table. Sol'kanar, on the other hand, remains a splashy fun card, and on those rare instances that he pokes his head into competitive Constructed play, everyone can smile.

As Magic has evolved, we have tried time and again to make big splashy cards that we hope casual players will enjoy good enough for constructed play, as we feel Magic, even at the highest level, should sometimes be about huge monsters smashing into one another. Of course, to give these cards all the abilities they need to survive in the hostile tournament environment, we have to infuse Sol'kanar with some amount of Stasis. The cards straddle the line of splashy and annoying and invariably polarize the casual audience into love it/hate it camps. 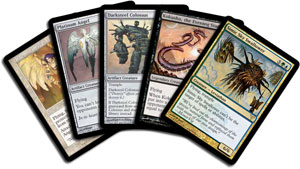 Five famous recent examples of such "Stasis-infused Sol'kanars" are Akroma, Angel of Wrath; Platinum Angel; Darksteel Colossus; Kokusho, the Evening Star; and Simic Sky Swallower. If you are the kid lucky enough to open one of these monsters and your playgroup has access to limited numbers of cards, you'll probably feel like king of the world. Imagine trying to fight against Akroma time and again when the best creature in your own deck is Scaled Wurm. Heck, people have a tough time fighting against Akroma when their deck is all tier-one rare cards. What we hope happens when Scaled Wurm Kid fights Akroma Kid is that Scaled Wurm Kid is shell-shocked initially, but at the end of the day is invigorated to go out and get his hands on an Akroma of his own or, if not Akroma, then something at least as powerful as it, or if neither of those at least some Wing Snares or other cards that will give him a chance in the games. Part of the excitement of Magic is how the game changes when new pieces are introduced into an environment, whether whole new sets into Standard or powerful individual cards into playgroups that to that point hadn't been exposed to them. When the environment you play in changes, the reaction we want from players is, "Now I need to adapt," not "Now I can't win anymore."

What makes someone hate a particular card? I imagine there are a few things, not the least of which is raw jealousy. Cards can be expensive, and if you have a limited budget, something like Darksteel Colossus may feel out of reach. But jealousy aside, the two complaints I imagine I'd hear most if I were a fly on the wall of most casual games would be "I can't do anything about that," and "This keeps happening every game."

Just as my old red-green deck could do nothing about Stasis, there are many people who play decks that have absolutely no answers to Akroma, Darksteel Colossus, or Simic Sky Swallower. Lightning Bolt kills none of the five creatures I listed as famous examples, ditto Terror. Of course, part (most) of the appeal of these creatures is that they are difficult to answer, which is in turn why people dislike playing against them. The game is very interactive normally—you get to beat me with Mahamoti Djinn in the games where I don't draw my Nekrataal and I'm okay with that—but these powerhouses intentionally try to strip the opposition of options. We counteract this by printing more and more varied answers: Condemn solves four of the five creatures, Cruel Edict has a chance against all of them. All we can hope for is the people losing to the big cards to be vigilant enough to track the answers down and tune their decks a little. (Of course, there will always be people that refuse to change: "I built this Bolt deck back in 1997, it used to win all the time, and any new card that I can't deal with is just stupid.")

The second complaint that we try to solve is one of frequency. Anything can be fun once in a blue moon; even the 20-point Fireball can be satisfying on both sides of the table if it only happens once every fifty games. Similarly, one way we hope that players without access to Akroma can beat players with access to Akroma is to win the game before the Akroma player both gets eight mana into play and draws Akroma. That should occur some decent percentage of the time assuming the players' decks are of approximately similar power apart from Akroma. When we run into trouble with potentially repetitive games dominated by bombs is when we print too many "cheats" to get them into play faster than normal. The cheats range from perfectly acceptable—Elvish Piper, which can be dealt with prior to causing any problems—to completely unfair—Tinker, which is both inexpensive and sudden. In the middle lies Zombify and its ilk, cards that are powerful but not absurd, but ones we nevertheless have to keep asking ourselves if we're okay printing.

We know cards like Akroma, Kokusho, and Simic Sky Swallower are popular—the demand for such cards is always high, kids covet their copies of them, and many players are happy when we make big creatures resilient enough to be competitive at all levels of play. But what we don't hear often enough, what the market price of the powerful cards doesn't reflect, is how many players have had their Magic experience lessened by the existence of these cards. Maybe it's just jealousy. Maybe it's pride; some people find playing with "easy" cards beneath them and want their opponents to apply the same standards to themselves. Or maybe the cards actually do more harm than good by unbalancing game play. We certainly hope it isn't the latter—whereas we have rigorous methodology for determining what's too powerful for high-level Constructed, we're left to guesses and theory when it comes to the wildly varying pocket-sized casual metagames that exist across the globe. We're smart people and we make decisions that are as informed as possible, but unless we find ways to infiltrate the myriad kitchen tables where our game is played, we can never really tell what is making who happy.

As always, anecdotes and feedback are welcome.

Based on what I've read around the 'Net in the past week, the unrestriction of Gush looks to be the move that will shake things up the most. We'll be watching, hoping we won't have to reverse our stance on that card (again) but perfectly willing to do so if it is deemed necessary.

Posted in Latest Developments on June 8, 2007