Posted in Latest Developments on January 20, 2006

the esteemed Mssr. Rosewater has previously explained, one of the hurdles design and development encountered while making Guildpact was giving it its own unique identity in ways other than just leaning on the three new guilds.

Yes, we altered some of the ten-card cycles ever so slightly to keep players on their toes. Yes, we shifted some of the overarching themes a bit—the cycle of common Auras from Ravnica with comes-into-play abilities have been replaced in Guildpact with a quirky little cycle called “Magemarks,” for instance. But that's not enough for a set to stand up on its own. Each set should have some very memorable subset of cards that are uniquely its own.

To that end, we created two rare cycles for Guildpact that had nothing to do with Ravnica—after all, we wanted them to be a surprise. You saw one of the cards from the first of these cycles earlier this week—Anthony's Yore-Tiller Nephilim is part of a cycle of the first-ever four-color creatures. I'll be showing you a card from the other cycle shortly.

As Guildpact was being designed, Magic Online's Vanguard format was a hot topic around the office. The original Vanguard format was created for the Arena league long ago, and was a popular play variant for a period of time. The idea was that each player “was” a character from the Magic storyline, and had additional powers associated with that character. If you were Gerrard, for instance, you got to draw an extra card each turn. If you were Squee, your opponent had to play with his hand revealed.

Anyway, a year or so ago we decided to give this variant new life online by tying it to peoples' avatars. Some of our developers, like Devin Low, Paul Sottosanti, and John Carter, were in charge of coming up with what each avatar did, and discussions popped up all over the department.

I personally really enjoyed Vanguard as a player (my Mirri five-color Necropotence deck was a hot one), and when I sat down to think about why, I realized I liked the initial “great reveal” that happened before each game started. What weird rules will this particular game be played under? I can't wait to see!

So instead of contributing to what the Online Vanguard avatars should do, I worked in the corner trying to bring that “aha” moment of the great reveal to normal Magic.

To that end, there are a cycle of “Leylines” in Guildpact. Each is a four-mana rare enchantment that, if it is in your opening hand, you may begin the game with it in play. Just like Vanguard, some Magic games will now begin with this crucial moment of realization that the rules are different this time.

These five cards required a balancing act that is among the most difficult that development has had to do. After all, in the dream scenario each of these cards is essentially free, and can even be free in decks that normally couldn't cast them. (We thought about adding extra text that only allowed them to be played for free if you had a land or a card of the corresponding color, but it just didn't seem worth it. Part of the fun of Magic is finding ways to “cheat,” and if R&D found them all first, accounted for them, and didn't let players have that kind of fun (think anti-reanimation clause on Darksteel Colossus), the game would be far worse off.) They definitely had to be worth playing, and worth close to four mana, but shouldn't break the game if they're in play for free.

The five that were originally submitted during design were all scrapped, and many, many new versions were plugged in until we found five that were all both unusual and interesting.

And here, for your viewing pleasure, is the Blue one: 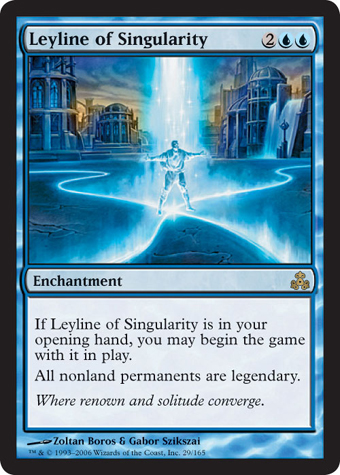 This card has lots of potential, both as a defensive hoser and as a build-around-me card.

As a hoser, it really keeps tokens in check. Since the Saprolings made by Vitu-Ghazi and other similar cards are all named “Saproling,” multiples cannot exist at the same time with the Leyline in play.

More interestingly, the card can combo with lots of other stuff. The Kamigawa block has tons of cards that interact specifically with legends, and the Leyline makes all of your creatures fit the bill. Minamo, School at Water's Edge can untap any creature, Konda's Banner can equip any creature, and Hero's Demise can off any creature in play.

The real fun begins when you combine the Leyline with Ravnica's “Hunted” creatures. Hunted Horror starts to look a lot better as a 7/7 trampler for

with essentially no drawback!

There's more where this came from. Each Leyline poses its own set of questions and lends itself to different strategies and counter-strategies. On top of the Gruul, Izzet, and Orzhov, Guildpact promises lots of brand-new goodies!

Be sure to check out the prerelease tournaments this weekend!

The Leylines are a cycle of five enchantments, each with "Leyline" in the name. If you have any Leylines in your opening hand, you may begin the game with any number of them in play. 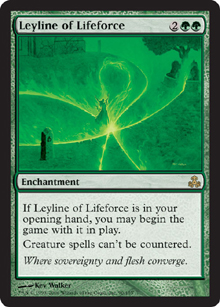 Not all of the card names have been made public yet, so I'll go over them next week. For those of you having trouble, the first one was “Gruul Signet.”

I'd like some “audience participation.” I'm willing to answer some number of card-by-card questions about Guildpact, so please send me your questions! Why does so-and-so cost so much? Did we realize that Card A and Card B combo so well? Come learn how development thinks!

Posted in Latest Developments on January 20, 2006