evelopers at Wizards of the Coast work to make their games more fun for people to play. Although we're all Magic players, we're not all the same Magic players as you are. That means that much of the time, we're making educated guesses about what's the most fun for everyone who isn't us.

When we're not occupied by making Magic fun, we sometimes travel to large Magic tournaments, like Pro Tours and Prereleases, where we sit down at a table and challenge any and all comers to games of Magic. In days of yore, we called this "gunslinging." These days, we're calling it by the more accurate name "spellslinging." 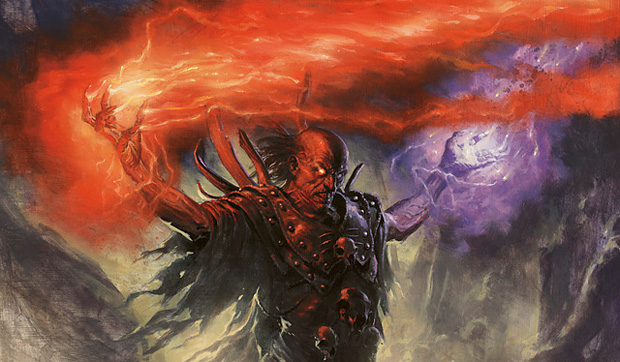 Spellslinging is a complicated endeavor. We want our opponents to enjoy the games against us. We often draw a crowd while spellslinging, so we do what we can to make sure that everyone watching has fun as well. However, a big part of spellslinging is that we have to do it for hours and hours on end. It's hard to put on a good show if we're not enjoying ourselves, so it's very important that we have fun. Happily, we're already pretty good at making games fun for other people, and the task becomes even easier when the target audience is us.

Today, I'll share a few tricks we use to keep ourselves amused during marathon spellslinging sessions. If you ever feel yourself getting bored with garden-variety Magic, you might try using one of them.

We Show Off New Cards

One of the most effective ways for us to have fun at Prereleases is to play with new cards. We know that people at these tournaments won't have the new cards in their Standard decks yet, and that could lead to an unfair advantage. Usually, people don't mind, as they are eager to see the new cards in action. 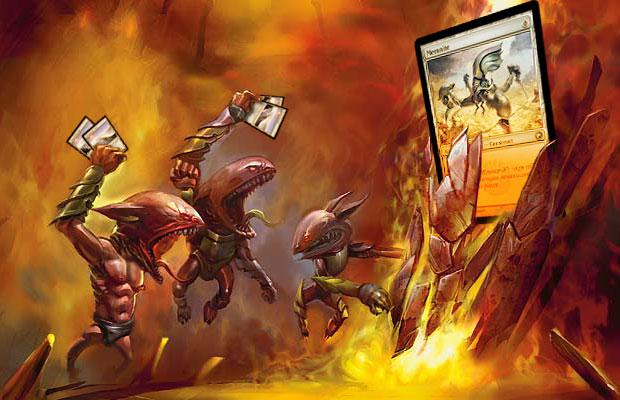 Although we don't show off our very best FFL decks on day one, there are often cards we think highly of that the rest of the community rejects for one reason or another. For example, Contested War Zone didn't seem to excite very many people right away. This is understandable, because it's pretty weird, but we knew that it was reasonably strong. Fellow developer Zac Hill chose to take a mono-red Kuldotha Rebirth–fueled Contested War Zone deck to his Prerelease, and reported that it was easy to have fun and put on a good show while playing new cards and often killing unprepared people on turn four.

Other times, a card remains underappreciated for several months. This happened most recently with Frost Titan, which was panned by the community as being clearly the worst Titan. I disagreed with that assessment, and happily Frost Titaned people over and over again whenever I could. Although losing is less fun than winning, I've found that people enjoy it more when it comes in a new and unexpected way. Playing underappreciated cards is a great way for us to keep everyone having fun.

When there isn't a new set to show off, it's still possible to play decks that no one has seen before. I'm not a master of making such decks, but we have people who are, and I'm always quick to borrow their decks when they're around at the spellslinging table. 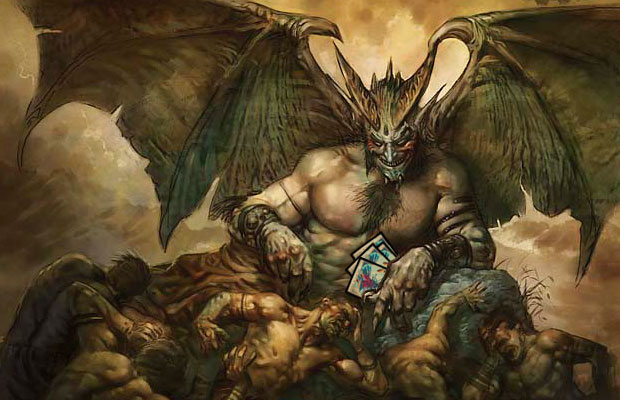 I was able to play with several such decks this past summer at Pro Tour San Juan, where we had the ever-inventive hall of famer Alan Comer as a guest spellslinger. Easily the best goofy deck he brought was a blue-black Hellcarver Demon deck that also contained four Emrakul, the Aeons Torn. The goal, of course, is to hit them with a Hellcarver Demon, get an Emrakul, the Aeons Torn, cast it, and kill them. Sometimes, though, I had to settle for hitting one of four Time Warps, then getting Emrakul, the Aeons Torn next turn. No one really knew what to think when they saw me cast a Hellcarver Demon, and each time I hit with it there was an awesome moment where I got to roll cards one at a time off the top of my deck. This was some of the most fun I've ever had spellslinging.

This isn't my natural mode of deck building, but the next time I go to an event, I plan on outsourcing the construction of some crazy decks to people who are qualified to do such work.

I don't mean to burst any bubbles when I tell you this, but for us, not playing the strongest decks we can when we go spellslinging is a concession to reality. Mike Turian, Matt Place, Erik Lauer, Zac Hill, and Dave Humpherys have all made the Top 8 of at least one Pro Tour. I have never done that, which means that I spent a good year and a half as the core developer with the least Magic tournament success. Despite that, I still have a Grand Prix Top 8, a Grand Prix Top 16, and five PTQ wins to my name. Statistically speaking, I'm a stronger player than most humans, and most of my colleagues are unambiguously more skilled than I am. If we were to play our strongest decks, we would be at a massive advantage over the average person we encounter while spellslinging.

Neither we nor our spellslinging opponents enjoy it when they have no chance whatsoever due to deck advantage. We have also found it unsatisfying for us to play suboptimally in order to keep games fair, as that defeats the whole purpose of it being cool to see us play in person. In order to put on the best show for everyone while keeping the process fun for us and our opponents, we adjust our decks down in power level in order to not blow average players away.

One way to do this is for us to play random one-of cards that don't normally get played in competitive Constructed. For example, we'll put a Blade of the Bloodchief and a Captivating Vampire into our Vampire decks, even though those cards don't show up in the Pro Tour versions of that archetype. This makes our deck less consistent, but puts on a better show and keeps us entertained as we play for the crowd for hours.

While many of my colleagues are able to sublimate their desires to play optimal decks, I have trouble doing that. I enjoy the challenge of maximizing for variables under a set of constraints, and doing anything else can cause me to lose interest in what I'm doing. Instead of playing an obviously wrong deck, I find it more satisfying to set extra rules for my deckbuilding and see how good I can get within the rules. 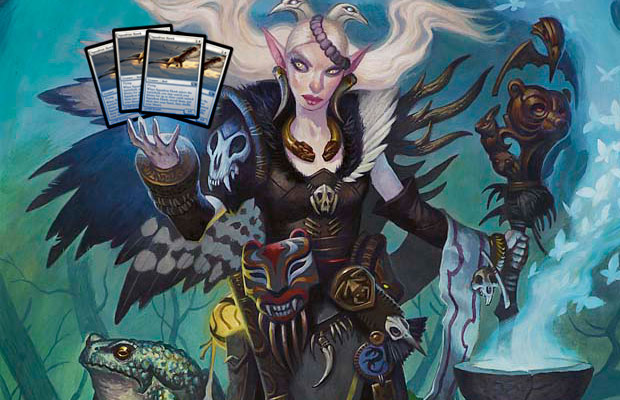 I got my favorite version of this idea from Director of Magic R&D Aaron Forsythe. When Morningtide came out, he built a deck that contained four copies of Reveillark, but was otherwise a singleton deck. It had all kinds of cards that were cool with Reveillark but not strong enough to make tournament Reveillark decks, like Clone and Merfolk Looter. The deck was full of cards that were often as much of a surprise to me as they were to my opponents, which made for a great show that was as fun for me to put on as it was for others to watch.

My own first attempt at this sort of deck was the Standard deck I took for my spellslinging trip to the Magic 2011 Prerelease in my old stomping grounds of Columbus, Ohio. I was crunched for time and had little of it to spare to build decks, so I chose to build only one deck. That deck needed to be fun enough for me to play for around ten hours straight, so I wanted a deck full of variance. I also needed to show off new cards. To do all of these things, I built a green-white deck that had four Squadron Hawks and four Fauna Shamans but was otherwise singleton. My mana was a little bit shaky—that's what happens when you only get one Noble Hierarch, one Llanowar Elves, one Birds of Paradise, and one Arbor Elf in a deck that really wants both acceleration and multiple white mana—but the deck was a blast to play, and I never got bored even after playing about twenty-five games with it.

I like keeping decks built with similar restrictions around, as they're great fun for random outings to game stores. Although the Fauna Shaman version got less fun when Shards of Alara block rotated, that doesn't mean I couldn't make another one. Here's the latest deck I built with similar rules.

This is reminiscent of the Caw-Go (or "Caw-Blade") deck that had so much success at Pro Tour Paris. However, the singleton restriction means that I get to steal bits of technology from elsewhere, like the Treasure Mage, Wurmcoil Engine, and Mindslaver that Patrick Chapin played in his Tezzeret build. I think my favorite thing about this particular instance of this kind of deck is that I can claim with some justification that I am playing the minimum possible number of every card in the deck. 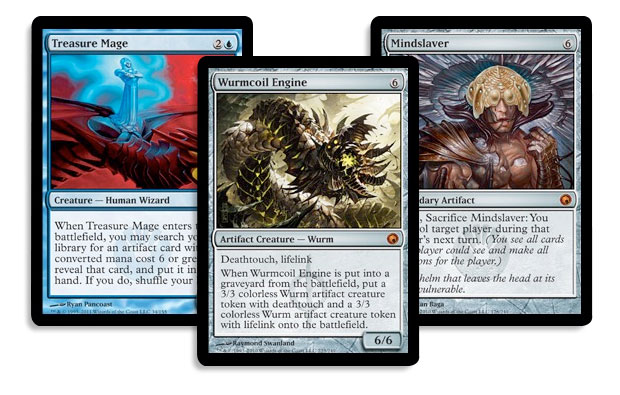 I got to take this deck through its paces recently on a research visit to Shane's Cards and Comics, a fantastic game store about five minutes from our offices. The Friday Night Magic format that evening was Booster Draft, but there were plenty of people who had Standard decks that I could play against. Although the deck is obviously handicapped, it was still strong enough for me to post a winning record, including a three-game match against a Kuldotha Red deck in which my sideboarded Phyrexian Rebirth, Kor Firewalker, Perimeter Captain, Sunblast Angel, Celestial Purge, and Baneslayer Angel teamed up to win Games 2 and 3.

If you're looking for a unique challenge this weekend at Game Day this weekend, consider rolling in with a deck built like this. I won't guarantee victory, but I bet you'll have a bunch of fun as the surprises keep coming off the top of your deck. I also wouldn't be insulted if you just stole my list instead of brewing up your own. I'd love to hear any stories about people playing almost-highlander decks this weekend.

Our next Pro Tour stop is Pro Tour Nagoya in June. Several of us will be there to sling spells, and this time I'm on the roster! This is likely your best chance to see me in person, so if you're dead set on that, I suggest booking a trip to Japan. Perhaps I will see you there!

Mirrodin Besieged Game Day is this Saturday and Sunday.