Posted in Latest Developments on November 28, 2008

Wizards of the Coast offices are closed for the Thanksgiving holiday, but we'll return with new articles (and, perhaps, pants sizes) on Monday, December 1. In the meantime, here's the article that ran in this slot last week for those who may have missed it. Have a great weekend, and we'll see you on Monday!

Last week, everyone's favorite Serious Fun author and magicthegathering.com editor, Kelly Digges, asked me to write this week's column, and let me know the theme of the week was Esper.

I went into the think tank, as I always do. Esper, Esper, Esper. After I discover I am writing an article, I wander around with an eye towards what direction I will take this column. My first thought was to discuss Esper development, how we gave life to the artifact shard, but then my brain went back to a particular disagreement I had with Mark Rosewater over Sphinx Sovereign. I knew what my topic would be: Sphinxes.

Let us play a word association game: I'll say a word, and you say what comes to your mind. 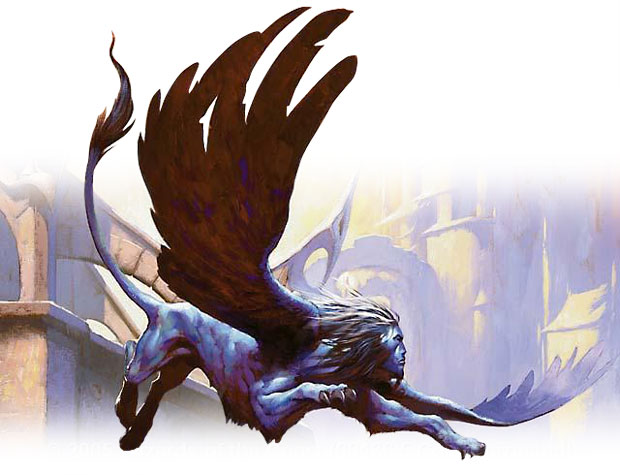 The Riddle of the Sphinx

This riddle originates in Greek Mythology; the Sphinx guarded the city of Thebes, asking each traveler. Oedipus solved the riddle, answering "Man."

Petra Sphinx asks its target to guess what the top card of their library is. A right answer rewards them with the card; a wrong one and the card is milled. Considering the Sphinx of Greek mythology would devour the owner of an incorrect guess, milling for one card doesn't seem like such a harsh punishment.

The riddle I won't be able to solve is: why is Petra Sphinx a white card? Sphinxes are very blue. They are a mythological creature that is known for placing value on knowledge above all else. What could be bluer than that?

The other riddle behind Petra Sphinx is: why doesn't it fly? Every (non-Goat) Sphinx in Magic flies, except for the Petra Sphinx. 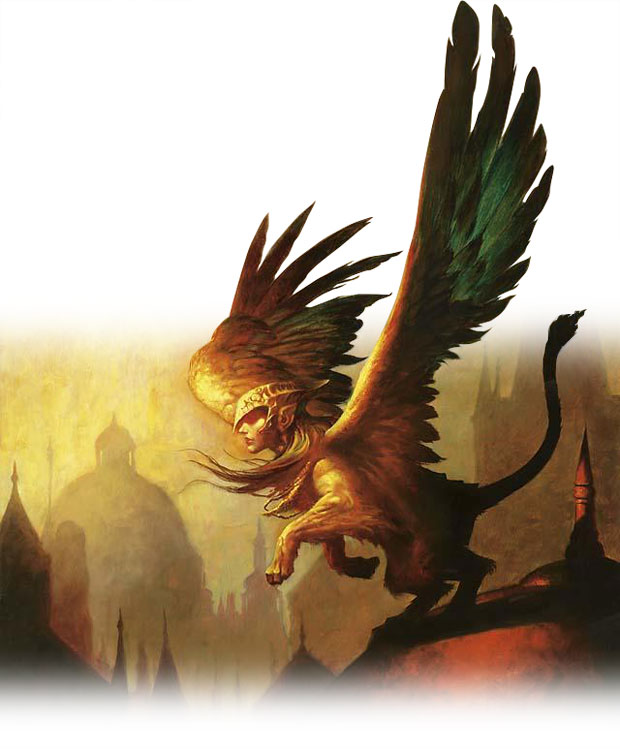 Around the time of Ravnica: City of Guilds, Brady Dommermuth presented to Development the idea of the iconic big creature. He wanted to make sure that each color had a go-to creature type for big creatures that would represent itself well.

I'm sure you can guess what red's creature was ....

But some of the colors' best options were unclear. For instance, black has Demons and Vampires. Green has Elementals and Beasts. Blue has, well, Shapeshifters. The problem with Shapeshifters as an iconic race is that they are by definition hard to define.

Sphinx, on the other hand, represents itself well as a creature type that feels blue because of the value it places high value on wisdom and intelligence. More importantly, Sphinxes allow for awesome designs. Ravnica was the first set to try out Sphinxes with Cerulean Sphinx and Belltower Sphinx.

Magic R&D was trying on Sphinxes for size. Magic hadn't had a Sphinx since Mistform Ultimus, and Petra Sphinx before that. Neither of the Ravnica Sphinxes even came with a riddle in the flavor text. We started off with cards that didn't represent the intelligence side of Sphinxes as much as the big flying creature side.

With Coldsnap, the land of snow and ice brought us Vexing Sphinx. Vexing Sphinx plays much more heavily on the idea that Sphinxes present riddles. It isn't an easy card to figure out what to do with.

Each turn you discard to the Vexing Sphinx, the number of cards you will draw when it goes to the graveyard grows. One way to use the Sphinx is with reanimation. Any discard always makes for a nice combo with reanimation. Another combo is to use Vexing Sphinx with cards like Squee, Goblin Nabob that return to your hand again and again. Or you could take advantage of the return of madness in Time Spiral with the discard ability.

The fact that we wanted to make Sphinxes start feeling more iconic led us to place Vexing Sphinx at rare. At the end of the day, I think Vexing Sphinx is a fun card, but just a tad too out there for showing off how cool Sphinxes can be.

Before I get to the Esper Sphinxes, I wanted to briefly touch upon Isperia the Inscrutable and Serra Sphinx.

Isperia the Inscrutable shows how we can make a splashy Sphinx. The combination of big power / toughness numbers, legendary, and flying get Isperia the Inscrutable started down the path to Sphinx success. The guessing game ability is kooky but fun. First, you need to figure out a card in your opponent's hand. Then you need to have built your deck to fetch out another awesome flier.

Serra Sphinx was a "timeshifted" Serra Angel from Planar Chaos. Moving a creature into blue with vigilance wasn't revolutionary to be sure. What it does offer is the opportunity to show how Alpha could have been a different world. 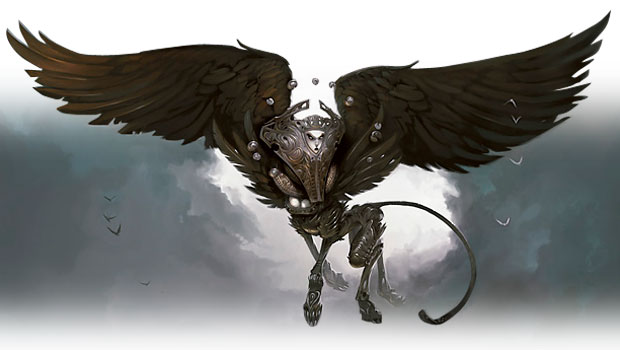 Up until Shards of Alara, we have seen two categories of Sphinxes: the Sphinxes that are simple blue fliers (Serra Sphinx, Belltower Sphinx and Cerulean Sphinx) and the Sphinxes that add a Sphinx-like riddle to game play and deck building (Isperia the Inscrutable, Petra Sphinx, and Vexing Sphinx).

This presented a larger issue for Magic R&D to answer: what do we want Sphinxes to represent and how?

We were committed to making Sphinx an iconic race, but what would be the best way? We couldn't continually do complicated challenge cards like Vexing Sphinx and expect them to resonate with our less experienced players. At the same time, while Serra Angel may have been a totally awesome creature in Beta, I didn't expect experienced players to go heads over heels about Serra Sphinx.

Esper brings three new Sphinxes to Magic. Sphinx Sovereign, Sharding Sphinx, and Sharuum the Hegemon were all revealed when Magic travelled to Alara. They each tried to strike a balance between making Sphinxes present awesome riddles and not being so tricky that people don't use them.

Sphinx Sovereign was the cause of my argument with Mark Rosewater. The Shards of Alara development team, led by Devin Low, spent many hours on our cycle of legendary creatures. We knew that since Shards of Alara would have Heralds to fetch the big iconics, those big creatures—such as Sphinx Sovereign—would be under extra scrutiny. Each card had to be an awesome, fetch-worthy bomb.

One thing that I looked at in figuring out whether a card was a worthy bomb was by looking at the card through Timmy's eyes. We wanted to make sure they felt awesome. Of Timmy, Johnny, and Spike appeal, the things that make a card awesome to Timmy most represent the qualities we value in big, iconic creatures.

Here was the ability from the original design that was submitted:

The development team changed it to (and it was printed as):

Flying
At the end of your turn, you gain 3 life if CARDNAME is untapped. Otherwise, each opponent loses 3 life.

So what were Mark Rosewater and I arguing about? I wanted to add the line of text "U: Tap or untap Sphinx Sovereign."

I felt that a Sphinx as powerful as Sphinx Sovereign would be able to control itself so well that it could decide which ability it wanted to have on any given turn. I liked that it made the card "more awesome" by reducing the tension.

Mark countered that "Decision trees are awesome." Mark wanted the Sphinx Sovereign to provide a decision to its owner. Should I tap and attack for 6 damage (and then 3 more), or stay back and gain 3 life?

The "Twiddle" ability lived on Sphinx Sovereign for a month and then was removed, leaving the card clean, simple, and a bit less "tricky."

For the longest time in Shards of Alara development, Sharding Sphinx would make a 1/1 flying Thopter each time a flyer you controlled dealt damage. Shortly, we came to our senses. Why would an Esper Sphinx "shard" when a flier dealt damage? That doesn't make any sense. We changed it to trigger on artifact creatures.

Tom LaPille found out that it doesn't wait forever the hard way. Devin Low attacked him with a Sharding Sphinx and a lot of little artifact creatures. Tom wanted to play Fog and then attack back for the win. Unfortunately for Tom, he didn't interrupt the game in time, and Devin got too many flying Thopter tokens. Poor Tom!

To gain audience with the hegemon, one must bring a riddle she has not heard.

Instead we went with:

Flying
When CARDNAME comes into play, you may return target artifact card from your graveyard to play.

This card made my developer senses tingle. The ability to reanimate into play has the secret recipe to many broken Magic cards. Disciple of the Vault, a sacrifice outlet, and two Sharuum are an instant win. We tried Sharuum the Hegemon in lots of our FFL playtest decks and gave it our developer stamp of approval! With a lot of new artifact permanents coming out in Esper, Sharuum lets you set up many awesome combos.

Kelly Digges took advantage of Sharuum as his General in Elder Dragon Highlander. Take a look at his deck in his most recent column, General Mayhem. He mentions that I played Buried Alive and got Lord of the Pit, Dwarven Blastminer, and Havoc Demon into my graveyard out of my Rakdos the Defiler deck. Kelly joked in his article, "Mike assured us that this was his entire plan, and he certainly wasn't going to do anything with all those cards in his graveyard. Uh-huh."

But I really didn't have anything to do with those cards! Here is my deck list, in case you feel the need to play a Demon deck:

1 Havoc Demon 1 Lord of the Pit

Elder Dragon Highlander is a great format for fun multiplayer play. If you want to win, I wouldn't recommend my deck. Kelly's seemed a lot better than mine.

Before I go I wanted to let people know that I will be a VIP on the first ever Magic Cruise from February 7-11. We will be celebrating the release of Conflux with Launch Parties, Leagues, and more! I will be there talking about the making of Conflux, answering any questions people have, and doing a lot of gunslinging. You can even win a spot on the cruise on Magic Online!

This week I will leave you with a riddle. If you have a good riddle, go ahead and post it in the forums!

What is black when you buy it, red when you use it, and grey when you throw it away?

Posted in Latest Developments on November 28, 2008