his past weekend was an exciting one for the Magic development team. For many years, whether run by us or by independent tournament organizers, the State Championships has been the first large-scale debut of a new Standard format after a big set release. This year's State Championships was this past weekend, and it was the first time we got to see the results of all our work on Constructed with Scars of Mirrodin.

We were so excited about this because Standard is the Constructed format we put the most time and effort into. Every core Magic developer plays several hours of future Standard each week in what we call the Future Future League, and several other people also contribute playtesting time toward Standard. We have a weekly meeting to discuss what we're finding in our playtesting, and we tweak cards based on the feedback we get. We sometimes change to Block Constructed for a little while in order to see what monolithic block monsters we might be making, but most of the time we're playing Standard.

Why do we play Standard so much more than other formats? There are two main answers.

First, Standard is by far the most played of all formats. We only play Standard on the Pro Tour twice a year, but when you walk into your local game store for a Constructed Friday Night Magic, it's probably going to be Standard. Technically speaking, each set we make is a different product, but in a larger sense the environment that we create for those cards to be used in is the real product. Lots of tournaments, including the World Championships, the Pro Tour, Nationals, States, and countless other third-party events with significant prizes all produce winning deck lists that propagate over the Internet. Those deck lists filter down and help define what gets played at your local FNM, which is what a new or returning Magic player sees the first time they walk in the door. Standard is our most important product, we need it to be fun for all levels of player, and we take sculpting it very seriously. 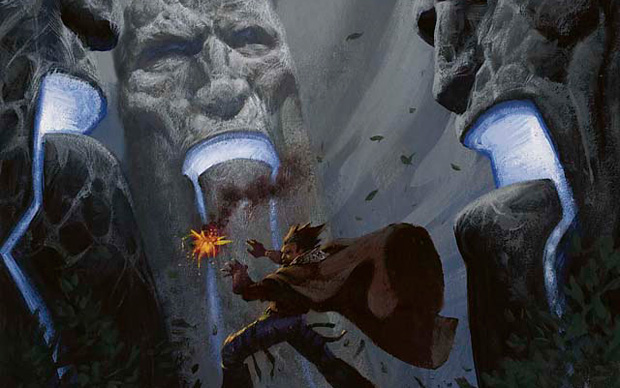 The second reason is that Standard is something we can actually sculpt. When a set releases, it joins between four and seven other sets in the new Standard that is created. This gives plenty of room for new cards to matter, and each set changes the direction of Standard in a significant way. I'm sometimes asked if we test formats like Legacy often, and the truth is that we don't unless that's the only way to see a card in action. We are often aware that we are making a card that will likely be played in Legacy—for example, in Zendikar we engineered Mindbreak Trap to be a way for non-blue decks to interact with Storm decks, and we thought Spell Pierce had a good chance of becoming a role player, but if we were to make a whole new deck powerful enough to be played in Legacy in one set, we'd probably be doing something dangerous to Standard!

Since we spend so much time on Standard, you might guess that we have a pretty good idea about what we want Standard to look like. In fact, we do.

Our first goal for Standard is diversity. Standard is our most-played format by miles, so we need it to be fun even when the world's best players are playing it over and over again. To accomplish this, we need plenty of different decks to discover. The worst case is when one deck is so strong that nothing else can compete, which is something that we try very hard to avoid. Also undesirable is a state when there are a small number of decks that are just better than every other strategy, and those decks make looking for alternatives frustrating. Much of the fun of Magic is in the discovery, and we want those who go looking for new things to be rewarded.

Our second goal is that Standard stays novel. It's human nature to become bored of things that stay the same over time, and we try to keep Standard from doing that. Set releases are an important tool for this, but it's equally important that we keep the format changing on the 361 days each year when sets aren't released. If the Standard format is the same today as it was two months ago, then that means there weren't enough things to discover in the set. 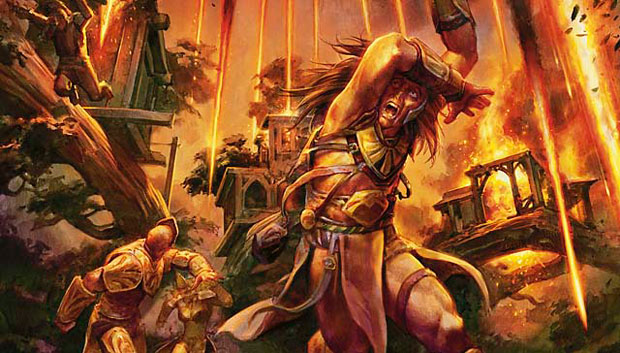 There are a few tricks we've learned for accomplishing both of these goals. The first trick we've learned is to include plenty of answer cards. Sometimes, we engineer them against particular enemies. The two most blatant examples of this are Volcanic Fallout and Great Sable Stag. Both of these were guided missiles aimed at Faeries, which spent too long in the spotlight as one of the best decks in Standard. The next card in that ilk is Obstinate Baloth, which was specifically built to make Blightning less attractive and less specifically meant to protect against red decks getting too powerful. We don't love making these kinds of cards, but we're willing to do it when an onerous enough enemy shows its face.

Although we're willing to engineer cards to be answers, we also print plenty of answers that feel far more natural. Pyroclasm and Back to Nature are simple cards, but they are clean answers to, respectively, lots of small creatures and masses of enchantments. Back to Nature in particular was made to deal with Leylines or totem armor Auras that got out of control. In turn, we chose to repeat Leyline of the Void in order to deal with graveyards. The most innocuous of these cards in Magic 2011 is Negate, which is quietly one of the cards in Magic 2011 that most helps me sleep at night. The most non-interactive decks tend to avoid playing creatures, and Negate is a card that allows those decks to interact anyway. I would be sad if we didn't have a card like Negate around to fulfill that purpose.

Usually, not all of the cards we intended as answer cards turn out to get used. However, they are important for protecting Standard from dominance by one deck. If something gets out of control, then we hope that the answer cards are ready to beat it back down. If Magic development was bowling, then printing answer cards is like putting bumpers in the gutter. We hope that we won't hit them when we bowl, and almost all of the time we don't, but if that's what it takes to get the ball down the lane, we're glad to do it. Scars of Mirrodin has at least four cards I can think of that fill this role. Can you find them? 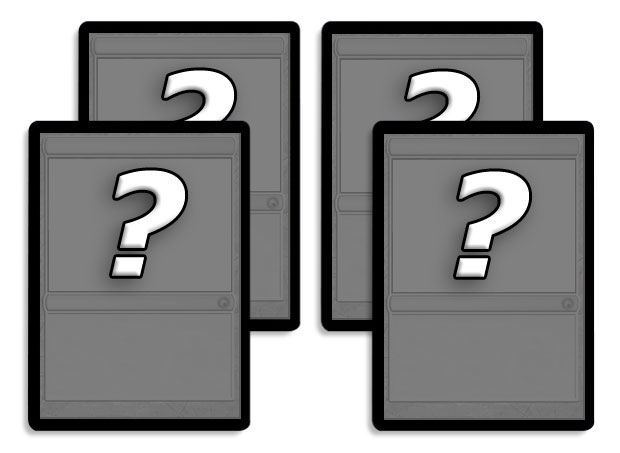 The second trick is to make figuring out what the best cards, decks, and strategies are so complicated that we can't do it internally. There is a certain mystique that Magic developers have in the public eye; I am often asked if the real world metagame looks exactly like our internal playtesting, as we must have had all the best decks. The real picture is a little bit muddier. We have at most a few dozen people working on Standard, and there are tens of thousands of you. If the very few of us could figure everything out before our sets released, that means we wouldn't have made an interesting enough thing. We like having a fairly clear idea of what's going on, and we make sure that we do, but we try to keep a healthy amount of fog around us at the end so that there is enough for you all to clear.

My favorite specific example of this technique to date is the Titans from Magic 2011. I don't think I could be happier with how they were received, and I also don't think I could be happier with how they've played out in competitive Constructed. By now, Primeval Titan is obviously the most powerful of them, but the order of the other four is rather murky. Sun Titan saw play in white-blue decks this summer, Grave Titan saw play in blue-black control decks this past weekend, and Inferno Titan and Frost Titans both had appearances together in Destructive Force decks. All five are interesting Constructed cards, but only Primeval Titan is part of monolithic decks. The other four are moving in and out of favor depending on what is around them, and that's exactly what Magic 2011 lead developer Erik Lauer intended for them. How did we do it?

Erik's trick in this instance was to make all the Titans close enough in power level that we disagreed internally about how good they were. If we could not figure out their power order conclusively inside the Pit, then that meant they were probably close enough. As the stars of Magic 2011, the Titans got plenty of attention from us, and Erik used that attention to tweak them until they were close enough that we all disagreed. Once there was enough disagreement, Erik stopped, and was satisfied. Once the set was finalized, we all came to the conclusion that Primeval Titan was the strongest one, but we still never settled the question of the rest of them before Magic 2011 released. It seems to me that all of you in the real world are still trying to answer that question, and we like it that way. 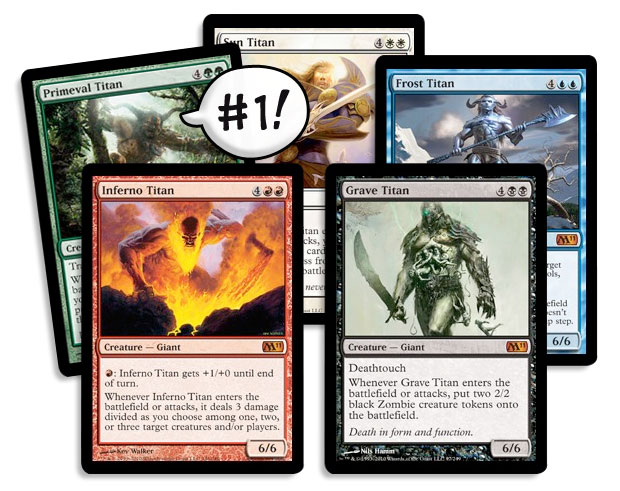 Since Magic 2011, we've embraced the idea that, when in doubt, we should make our best Constructed decks and cards as close in power as we can. You haven't seen the fullest extent of this yet, but I look forward to seeing how it plays out.

I'm pleased with Scars of Mirrodin Standard, and it looks to me like this past weekend's State Championships were a lot of fun. I'm looking forward to another good year of Standard, and I hope you are too.