Standard from Kyoto to Seattle

Posted in Latest Developments on March 6, 2009

ast weekend, the best Magic players in the world converged on Kyoto for a Standard-format Pro Tour that was also Conflux's debut on the high-level tournament scene. The same weekend, I played in an unsanctioned Standard tournament here in Seattle. Today, I'll talk about why we care about Pro Tour results, what we learned from the results of Pro Tour–Kyoto, and my own experiences playing Standard in the real world.

As developers, we care about Pro Tour results for two major reasons. One reason is that it's very important to us that Magic is fun to play no matter how you play it. Many games degenerate when they are taken extremely seriously. We're very proud of how fun Magic is even when players are doing their very best to win, and we have every intention of maintaining that. Pro Tour results are the best way for us to measure how well we are fulfilling on that intention.

The second reason we care about Pro Tour results is that the decks they produce define Constructed environments for tournament players. Constructed Pro Tour Qualifier seasons use the format of the Pro Tour that most closely precedes them, so the top decks from a Pro Tour often become the very same decks that tournament players play with and against for multiple months (in this case, starting in April). Those tournament players will have less fun if they don't enjoy those decks. This effect becomes even larger when the format of the Pro Tour is Standard, which is played at Friday Night Magic events across the world every week.

Pro Tour–Kyoto's Constructed portion used the Standard format. The last time Standard was played at the Pro Tour was last year's World Championships. The Top 8 decks of that tournament included a full five Faeries decks, which was unfortunate. We like our environments to offer players many reasonable deck choices, so we are sad when one deck composes over half of the Top 8.

We were hoping to have a more diverse Top 8 this time, and we were not disappointed. Oddly, perhaps the best sign was that the story of the Top 8 had very little to do with the decks played and everything to do with the players playing them. Luis Scott-Vargas and Gabriel Nassif are two of Magic's superstars, and when they entered the Top 8 on opposite sides of the single-elimination bracket there was the potential for a dream Finals match that could go down in history, similar to the Finals match between Jon Finkel and Bob Maher Jr. at the World Championships in 2000.

I enjoyed watching the story develop over the live webcast, all the way from Nassif's absurd called topdeck against Matteo Orsini Jones to the tense five-game Finals match between Nassif and Scott-Vargas. My only regret was that Game 5 of the Finals was decided largely by mulligans. I felt cheated that I didn't get to watch another game as amazing as the fourth game, which featured incredible back-and-forth moments and tricky judgment calls from both players. I encourage you to go watch the archived Finals webcast (available on the main coverage page) if you haven't already. It's a privilege to watch masters of any craft work, and both Gabriel and Luis are spectacularly talented and skilled Magic players.

I believe that the story was the players rather than the decks because of how diverse the Top 8 decks actually were. There were two copies each of Black-White Tokens and red-white Reveillark, then one copy each of Red-White Kithkin, Five-Color Control, Faeries, and "Dark Bant" four-color Noble Hierarch aggro. That's a lot of variety, and includes decks for players of any taste.

It's reasonable to ask what changed between Worlds and now. I have two answers concerning the major factors. The first is that Volcanic Fallout's inability to be countered was enough to scare players away from playing Faeries. I vividly recall playing Faeries in the FFL against a few different Volcanic Fallout decks and having the card come out of nowhere and completely crush me, and I can only assume players decided not to experience that for themselves. The other reason is that Conflux raised the overall power level of the format without helping Faeries. Path to Exile, Scepter of Fugue, Wall of Reverence, Volcanic Fallout, Noble Hierarch, Ancient Ziggurat, Martial Coup, and Banefire all made appearances in the Top 8. It is not an accident that none of these cards naturally slot into the Faerie deck.

The diversity in Standard becomes even more apparent when you look at the list of decks that went 5-3 or better during the Standard portion of the Pro Tour. There were Windbrisk Heights and Spectral Procession–based white decks of many varieties, some Five-Color Control decks, some green-based aggressive decks, some red-based attack decks with Blightning, some copies of Faeries, and a few Swans of Bryn Argoll decks for spice. It's nice to see so many different things succeeding, and I believe that all of those archetypes and more will be taking down Friday Night Magic tournaments over the next few months.

The three cards that placed the most copies in the Top 8 were Reflecting Pool, Windbrisk Heights, and Spectral Procession. Reflecting Pool is a powerful mana-fixer whether you pair it with painlands and filter lands in a two-color deck or with Vivid lands in a five-color concoction, so it's not a surprise to see many of them in the Top 8 decklists. Windbrisk Heights's performance is much more impressive. It was a sleeper card when Lorwyn came out, but unleashed its potential in Lorwyn-Shadowmoor Block Constructed in combination with Spectral Procession in Kithkin tribal decks. Based on its representation in the Top 8, it would be quite reasonable to say that Windbrisk Heights and Spectral Procession are cards you shouldn't leave home without, but on the other hand only two of those decks made it out of the Quarterfinals. Only time will tell what the best strategies are.

I also got some firsthand experience in our current Standard environment last weekend. There was a large unsanctioned Standard tournament in Seattle last Saturday, and I took the opportunity to actually play in a Magic tournament for the first time in four months or so. I had been planning to play some sort of five-color control deck. The Top 8 decks had been posted by 11:00 p.m. on Friday night, so fellow Magic developer Erik Lauer and I tuned my deck late into the morning with that in mind. The first thing we identified was that when two copies of Nassif's deck play against each other, both players' life totals quickly spiral off to infinity and no one can win. However, Erik wanted to play even more card drawing than Nassif had, and Jace Beleren is both an excellent card drawing spell and a great way to win that ignores your opponent's life total. Planeswalkers are also excellent things to hide behind Walls, and Erik had the wild idea of playing all eight Walls! I ended up playing the following crazy brew:


I spend most of my time working in an environment that's about eight months in the future, so my deck was a lot less tuned than most of my opponents'. I was also less practiced than my opponents were with the deck archetypes in the real world. I was a bit disappointed to only post a record of three wins and three losses, but I still had tons of fun. My three wins were against two slow grinding control decks that couldn't handle Jace and a red-black deck that couldn't beat my powerful curve of Plumeveil into Wall of Reverence. Also, Jace Beleren ended the day with five notches on his belt. My favorite match of the tournament was against a player who had essentially copied Nassif's deck from Kyoto. About halfway through Game 1, he realized with creeping horror that he had no way to win a long game against me and that Jace was inevitably going to destroy his library. Not even two Cruel Ultimatums were enough to stop me! It was nice to see that the script I wrote in my head about that matchup actually was accurate. 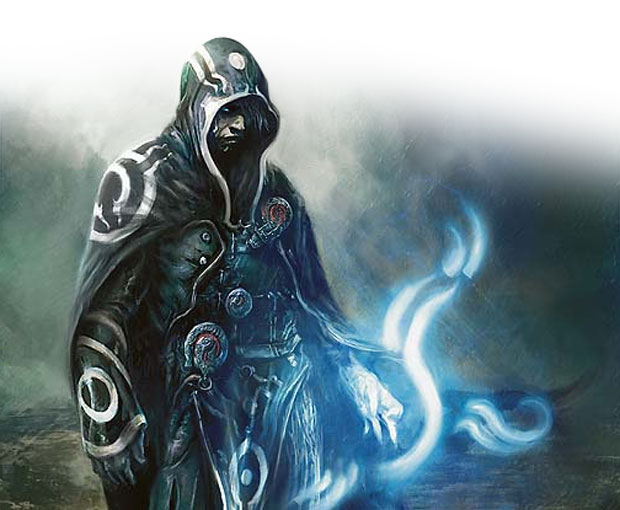 I now believe that I played one too many Jaces in the maindeck, and I wish I had played a third Terror. Also, the sideboarded Wrath of Gods should have been Infests so that my walls would live through them. Thanks to Celestial Purge, I didn't need Wrath of Gods against the red decks, and Infest would have been much stronger against the white token decks. Regardless, I had a blast during the event. The format seemed extremely healthy and diverse, and I enjoyed my games. Eric Reasoner and Tony Mayer put on a great tournament, and the Seattle Magic community extended a warm welcome to Peter Knudson and me even though we aren't regular competitors. Thanks to everyone who we interacted with!

It's not every day that I get to be this excited about a Standard format, but we don't often have a Standard Pro Tour go as well as this one did, and Magic R&D members don't often get the chance to play a tournament in the same world that you all do. Between watching the coverage and my own tournament experience this past weekend, I am confident that there's tons of fun to be had in Standard right now whether you're playing in a local Friday Night Magic, running queues on Magic Online, or trying to qualify for October's Pro Tour–Austin. Get out there and play!

The results of last week’s poll were corrupted by a database error. I’m still curious about the question I asked last week, so I’ll run that poll again alongside a new one.

Before I go, I’d like to share a Magic puzzle that might be fun for some of you to work on. Earlier this week in the Pit, developer Erik Lauer talked about a puzzle he solved in 1995. Build a Vintage-legal deck, then stack it in any order you choose. Your opponent gets to cut it exactly once before you draw your opening hand. You will take the first turn, and your opponent has no way to interact with you during your first turn. Can you stack your deck so that you win the game on that first turn no matter where your opponent chooses to cut the deck? Erik managed to do it in 1995, and there was a decent amount of discussion about whether it could be done now. Can it still be done? Sound off in the forums!

Posted in Latest Developments on March 6, 2009