ne of the most important questions for developers when dealing with Standard is what the mana base looks like. While it is very easy to play monocolored decks with nothing but basics, it gets progressively harder the more colors you add. One of the things we like about Standard is that we can shape the threats and answers in the format and let the format change and evolve to new threats. That movement, though, needs a strong enough mana base that decks targeted at the current metagame don't lose to their own mana as much as to their opponents' decks. 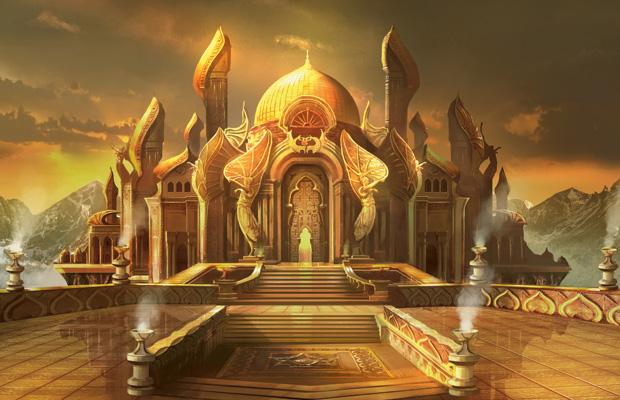 In the past, we viewed enemy colors as very different from allied colors in terms of the amount of fixing we gave them. Look, for instance, at the Tempest enemy painlands , which were like the Ice Age painlands... except they entered the battlefield tapped. Besides making them worse, we also only produced enemy dual lands every other year at their most frequent, which led to a huge gap between what mana fixing between allied and enemy colors looked like in Standard. Perhaps the most egregious version of this was during Odyssey/Onslaught Standard, when allied decks were able to play the Invasion Coastal Tower cycle, Odyssey's filter lands, and Onslaught's fetch lands. What did enemy colors get? City of Brass. That's hardly a fair trade, right there. In retrospect, it is a miracle that decks like UG Madness managed to perform as well as they did.

Let Them Have Mana

While it made thematic sense to separate enemy and allied color fixing in the past, we have come around to the definite conclusion that it is just plain incorrect from a game-play perspective. This is one of these situations where game play should just trump flavor. Looking at Standard as recent as Scars of Mirrodin/Innistrad, it isn't surprising that the vast majority of decks were two-color allied decks—the enemy color decks were playing Terramorphic Expanse and the Innistrad duals as opposed to playing the Scars fast lands and M10 duals . All things being said, there is a relatively small power difference between those two mana bases, but a combination of the perceived inequity and a small power level difference really hurt the enemy-color decks. We already generally produce fewer enemy-color gold cards than allied-color gold cards, so adding in those cards being harder to cast just doesn't help them see Standard play.

Current Standard mana bases are about as strong as we have ever allowed mana to be in Standard. While it's true that you don't get the secondary strength of man lands like you did in Zendikar-era Standard, having access to twenty-four lands that can enter the battlefield untapped and don't lose you life each turn in a three-color deck is an unheard of feat in Standard's history. By the time Gatecrash was released, we saw a great number of three-color aggro and control decks, and this really afforded players to cast the Return to Ravnica cards they wanted without going too far out of their way. I think this was tremendous boon for Return to Ravnica block.

As Zac Hill mentioned last year, the core duals introduced with M10 wouldn't have been included in M13 except for how well they played with the Ravnica shocklands (okay, that last point was only implied in his article). It was very important for us that Return to Ravnica, a block based around multicolor cards, have the Standard support to make said multicolor cards playable. Keeping only one set in the core set instead of both would've caused an inequity in the mana fixing and led us to printing only one set of duals in Theros, making Block worse, and forcing us to continue an inequity somewhere else.

With that, let's look at what the cycle of mana-fixing lands looks like in M14:


That's right, for the first time since Fourth Edition, there will not be a cycle of mana-fixing lands in the core set. All good things must come to an end, and for this year, having core set duals was that good thing. Making sure that there is sufficient mana fixing in Standard is important to us, and—although between the Ravnica shocklands and the Gates there are enough raw cards in Standard to support two- and three-color strategies (certainly, they both showed up at the Pro Tour), I will let you in on a secret—there will be a cycle of dual lands in Theros block. I can't tell you anything else about them yet, but I am very excited about them. Releasing the dual lands in that set will let us better control how Standard plays out, and will let us create a better experience for Theros block, which will in turn improve Theros-"Huey" Standard.

Of course, removing the core duals left some space in the set for other lands. I'm going to share a few of them with you right now. The first one is perhaps the most important and had the greatest impact on our FFL when it was introduced. You may have seen it before, but here it is: 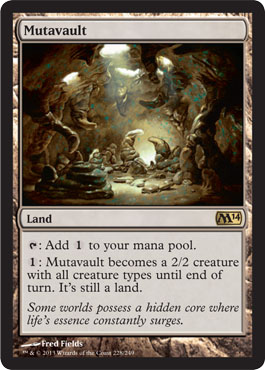 Whabam! Mutavault didn't begin in M14, it began in Modern Masters, and it only came up in conversation when we were looking to replace the rare land that had previously been slotted for the set. In fact, more than a few of the developers had their doubts that the card would survive in the file, because of how powerful it is. What we found, though, was that Mutavault brought about a lot of very interesting decisions for Standard deck building, and it really created huge changes for the better in our Future Future League environment. All of a sudden, the greedy three-color aggro decks we were playing started finding ways to reduce their color count to be able to better run Mutavault. It allowed for more interesting and dynamic games between aggro and control.

There are different ways to influence metagame as we release new cards. One is negative pressure—we can add cards like Price of Progress to the format to punish people for doing something, in this case punishing people for playing dual lands and forcing them to play more basics. I find that, overall, that is really a measure of last resort. Instead, I greatly prefer the positive pressure of giving people something new and different to do that doesn't fit into the old deck archetypes quite so well, and I think that Mutavault does that for decks like Naya Blitz and Junk Aristocrats. Both decks have mana bases that would have a hard time supporting Mutavault, and, therefore, more players may abandon those strategies for decks like RG Aggro or Zombies that have an easier time fitting Mutavault into their deck. While I suspect that Mutavault will show up in plenty of three-color-plus decks, it also puts a lot of pressure on those decks' mana bases, and will probably end up forcing more mulligans than they would normally take.

That isn't the only land I'm going to reveal today, however. 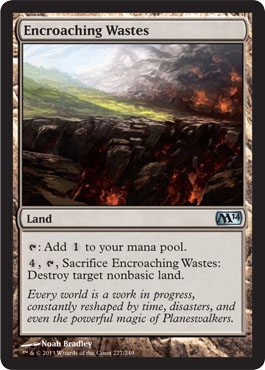 While Mutavault found its way into most of our aggro decks, Encroaching Wastes was more often an inclusion in our control decks, usually taking up two or so slots. While it doesn't have the raw power of a 2/2 attacking creature, it did give the control decks a number of very important outs to cards that previously they had a hard time dealing with, the first and foremost being Cavern of Souls. It also allowed our RWU control decks to have a powerful counter to Nephalia Drownyard, which tended to skew the control mirror matches in the Esper direction.

Beyond that, it also has the ability to punish decks whose mana bases are greedy over the course of the game, while not doing it so quickly that entire games are decided by two Encroaching Wastes in the early game.

Everything in Magic is cyclical. I think if you asked most people what the most powerful part of Standard is right now, you would get a lot of different answers—the creatures, the spells, the Planeswalkers. I don't think many people would answer what I believe is the actual answer—the mana. While the mana bases in Standard may not be up to the level of mana bases in Modern or Legacy, they are a fundamental part to many of the top decks right now, and have allowed almost every deck in the format to exist without having to put a whole lot of thought into its mana base.

While we have no intention of going back to an era where players are unable to cast their spells, we are leaving an era of Standard where mana fixing was overly abundant, and most importantly incredibly easy. The opportunity cost was almost zero, but that was done intentionally to support the Return to Ravnica block. There was so little downside in the speed or consistency in your deck in moving from a two- to a three-color deck for the last year, and that will change when Standard rotates in the fall. Again, I believe the lands we have in place for Theros block are wonderful, but they do not offer the same level of ease and power with three-color mana bases as the shockland/M10-dual-land combination.

I personally believe that is a good thing. We need to change things around in Standard every year to keep the game fresh, and utilizing the mana base is one of the tools we have to do it. This year, the core set has no duals. Next year it could, and they might disappear the year after that. It's really hard to say this far out. What we plan to do is use the slot of rare dual lands in the core set as a tool to help balance out Standard and make sure that we have enough mana fixing in the format year after year.