Posted in Latest Developments on January 18, 2008

To sum it up, I'd want a Rogue exactly like :

That means for zero mana, you can mill your opponent for three cards a turn, while simultaneously dealing 2 damage each turn from the attack. And unlike normal milling, these cards are removed from the game entirely, not put into the graveyard, so your opponents can't ever use those cards from the graveyard or bring them back. Your opponents never get the stolen cards back, even if they kill Grimoire Thief.

If an opponent plays a spell with the same name as a spell you've secretly stolen with Grimoire Thief, that's your chance to spring your trap. You can pay

and sacrifice Grimoire Thief to counter the Cloudthresher. If there are five copies of Dragonstorm (or Empty the Warrens, Ignite Memories, etc.) being played because of the storm ability, your Grimoire Thief can counter all those copies at once by sacrificing and revealing a stolen Dragonstorm.

If you can find ways to tap your Grimoire Thief besides attacking with it, that will trigger its card-stealing ability too. Lorwyn and Morningtide have tons of opportunities for such Merfolksy trickery. And you never have to sacrifice Grimoire Thief if you don't want to, even if your opponent plays a spell that matches one of the ones you stole.

Like many Morningtide creatures, Grimoire Thief can be looked at three ways: As a Rogue, as a Merfolk, and as a blue creature beyond any creature type at all. And in any of these categories, it has the flexibility and the skills to play a lot of different roles.

First let's look at how this little beater fits in as a Rogue. The flavor is there: It's literally a thief sneaking up and stealing the pages from your opponent's spellbook (a.k.a. "grimoire"), then using the spells written on those pages to cancel those same spells cast by your enemy. In time, Grimoire Thief can even steal all the pages from an opponent's spellbook so he or she has none left... and we all know what happens then. 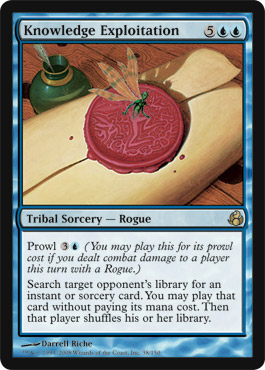 Grimoire Thief also fits in with the Rogues of Morningtide mechanically. By now you've seen that Morningtide's Rogues have a unique keyword mechanic all to their sneaky selves: prowl. The German magazine Kartefakt previewed Knowledge Exploitation while Mark Rosewater gave away Notorious Throng. The way to turn on your cards' prowl abilities is to attack with your Rogues and get them to deal combat damage to your opponents. That means you want Rogues that are good at attacking. Grimoire Thief is an incredibly efficient blue attacker at 2/2 for two mana with three abilities, something almost unheard of in blue creatures across time. In addition, Grimoire Thief's spell-stealing ability triggers every time you tap him to attack, which goes perfectly with the Rogue strategy of getting lots of bonuses when you hit your opponent with your Rogues.

Rogues in Magic also have lots of ways of keeping creatures unblocked, including fear, flying, and unblockability effects, as well as blue and black spells knocking blockers out of the way. All of these can help you keep Grimoire Thief alive turn after turn, building its stack of stolen loot while chipping away at your opponent's twenty and sixty at the same time.

Finally, several of the prowl cards you haven't seen yet have very low prowl costs, meaning you cast them for

, often getting additional prowl bonuses along the way in addition to the reduced mana cost. In order to hit your opponent with a Rogue in those early turns to trigger those cheap prowl costs, you want very cheap Rogue attackers, and Grimoire Thief is about as cheap as they come, making it the perfect vehicle to drive your early Prowl cards.

Grimoire Thief is a Merfolk every bit as much as it is a Rogue, and it can play a completely different role in Merfolk decks. Lorwyn's Merfolk have two big mechanical themes, both of which are carried forward in Morningtide: First, they can give themselves tons of islandwalk while giving your opponents Islands. Second, they have a bunch of cards that say "Tap an untapped Merfolk you control to do something cool" and a bunch of other Merfolk that say "Whenever this creature / a Merfolk you control becomes tapped, get some bonus." Put 'em together, like putting together Drowner of Secrets and Judge of Currents, and you've probably seen people milling their opponents for huge chunks every turn while gaining huge chunks of life.

Grimoire Thief fits in perfectly with this latter Merfolk theme. Combine it with that Drowner of Secrets and Judge of Currents, and all of a sudden you're milling six cards a turn while gaining 3 life a turn. Then add Merrow Commerce and...hold on, let me do some math....you are milling fourteen cards a turn while gaining eight life a turn. It doesn't take many "mill you for fourteen"s to demolish a library, and gaining 8 life a turn gives you a lot of time to do it. Grimoire Thief can really help this kind of non-attacking Merfolk milling get out of hand in a hurry.

To use R&D lingo, "tap outlets" like Drowner of Secrets (or Summon the School, or Benthicore, or Springleaf Drum, or unrevealed others in Morningtide) also effectively give Grimoire Thief haste. Since "Tap an untapped Merfolk you control:" is technically not a

ability, it is actually not subject to summoning sickness, and so you can use any of those tap outlet abilities to tap Grimoire Thief as soon as it hits the table—or in response to something or in the end of turn step of your choice. If you have a Merfolk-theme tap outlet, then even your opponent kills Grimoire Thief as soon as you play it, you still get to steal the top three cards of his or her library in response.

One thing you always have to be careful of when setting up a big Merfolk machine like this is board-sweepers. When you're loading down the board with Merfolk, you don't want to see Pyroclasm. Fortunately, Grimoire Thief gives you a way to counter that Pyroclasm before it ever hits.

There are tons of Lorwyn Merfolk cards that give you rewards every time you tap them, just like Grimoire Thief, including Fallowsage, Veteran of the Depths, and Surgespanner. And besides Tappy Merfolk centering on milling, lifegain, or Surgespanner, you can also use Merfolk like Lord of Atlantis to put together a good version of the aggro-control decks of the next section:

Merfolk and Rogues both include tons of blue weenies, and Grimoire Thief also fits perfectly in the most classic blue weenie deck archetype of all: aggro-control, sometimes known as "Fish." In aggro-control decks, the idea is not so much to bury the opponent in tons of little creatures like a white weenie or Elf deck. Instead, you want to put out just one or two cheap creatures before your opponent has a chance to play anything, then spend the rest of your turns counterspelling or bouncing everything your opponent tries to play, clearing the way for your one or two weenies to go the distance and take the whole game. Sometimes evasion like Lord of Atlantis, various flying Faeries, or Spiketail Hatchling have been used over the years to prevent enemy creatures from blocking the blue weenies.

Keeping ahead on tempo is absolutely crucial for aggro-control decks. That means they need cheap, aggressive blue creatures that show up before opponents' mana curves get going, then lots of inexpensive bounce and countermagic to keep opposing blockers and removal spells off the board. That way, the cheap blue creatures can win the game before the more expensive opposing cards can get through the bounce and countermagic to stay on the board. Grimoire Thief fits right into this archetype, with as small a mana cost as you can get for a 2-power blue creature without severe drawbacks, and also a one-mana disruptive countermagic ability.

In addition to all of his abilities, combos and roles, Grimoire Thief's sheer size is also pretty remarkable, almost unprecedented. In all of Magic's fourteen-year history and dozens of sets, Magic has only once before had a 2/2 mono-blue creature for two mana with no drawbacks. Alpha's (and Time Spiral's) Lord of Atlantis. And even Lord of Atlantis sometimes works against you by pumping up an opposing Chameleon Colossus and giving it islandwalk, in a way that Grimoire Thief never does.

, though the debate has continued for years in R&D of whether hybrid cards "count" as establishing precedents for mono-color cards. It's awfully hard to beat fourteen years and thousands of Magic cards on anything. But that tricky Grimoire Thief seems to have stolen a few pages out of the record book for himself.

My favorite thing about these results is that each of the classes has more than 1000 people voting for it and at least 12% of the audience, even before any cards have been shuffled up. It would be bad if one of them was a dog, with only eighty different people excited about it. Wizards and Rogues are essentially tied for first. As a Wizard (of the Coast) myself, that sounds good to me. In a game called Magic, you'd have to expect a tribe of Wizards to have a lot of action. The fact that Rogues have their very own keyword mechanic all to themselves in the form of prowl seems to have gotten a lot of people very excited about them too. Or maybe it's all the self-described "rogue deckbuilders..." I ran this poll before the Morningtide Prerelease, and even before the second week of previews, so it's a pretty early opinion. I'll ask again about favorite races and classes in six months or a year when people have had time to see them all on the battlefield!

Posted in Latest Developments on January 18, 2008