though I started working here in R&D a couple years ago, it took me a while before I was formally included on any design or development teams. I was on exactly zero of the six teams that put the Kamigawa block together, so needless to say I was champing at the bit by the time I was asked to contribute to Magic again in any serious way.

My first task was the construction of Ninth Edition (with Brian Schneider), and then after that I dove in head-first into the upcoming Ravnica block. Mark Rosewater picked me to be a member of the awesome design team, and I was later the “design rep” on the development team. Add to that all the playtesting, theme deck testing, and the dash of creative work (a handful of last-minute card names) I did, and it's quite possible that I spent more hours working on Ravnica than anyone else in the company (at least that's what I tell myself). And I didn't stop there. I was a replacement for a drop-out on the Guildpact design team, and actually led the design of Dissension. I have also played the role of developer-on-demand for the two small sets, the last of which is just being finished this week. Needless to say, I can't wait for this set to be released. And not just to see players' reactions to the cards, but because I want to play with the darn things!

Being on both the design team and the development team for a set is kind of like rapping and producing. I get to write dope rhymes, and then head back to the studio and the 48-track board to make the beats. Call me the Kanye West of Magic.

Rosewater already went over the phat squad of MC's we had spittin' lyrics on this one, including Mike “Misdemeanor” Elliott and The Original Doc G, so let me run down the development crew that made it funky.

Brian Schneider – The Expos weren't disappointed when they handed Schneider the full-time job behind the plate last year. He posted career highs in nearly all his counting categories while improving his strikeout rate and walk total. Defensively, he fostered a young pitching staff beset by injuries, yet he was able to post the fifth-best catcher's ERA (3.86) in baseball. He also led the majors in throwing out would-be basestealers, with a nearly 50-percent success rate.

Randy Buehler – Randy was on the team for only a few short weeks, but had to bail suddenly to go work on secret projects that Alan Comer can't tell you about. That said, there is at least one card in the set that costs

thanks to Randy's keen eye and tireless dedication to the game.

Henry Stern – Henry is a veteran developer, and was later the lead for Guildpact. He has recently been branching out into our New Business section, and is the designer of an upcoming Avalon Hill board game called Vegas Showdown. Henry's new role as the lead developer for New Business has sadly cut back on the time he has to devote to Magic, but the hidden benefit of the promotion was the forced retirement of his Ivory Tower T-shirt in favor of more spiffy duds.

Mark Gottlieb – Before he became the Magic Rules Manager and before he was worshipped by an insane cult, Gottlieb was just a guy with a column on this website, an eye for nifty card interactions, and a n00b Magic developer. Obviously things went well for him, as he quickly found himself on the Dissension design team, and later acquired a new title that left him the thankless job of sorting out the sane from the insane in the cards the rest of us design. As part of his training, he was locked in a padded room with Humility and Volrath's Shapeshifter for a week—an ordeal from which he emerged alive and only slightly scathed.

Me – Sadly, I'm not very interesting.

On to the Preview Card… 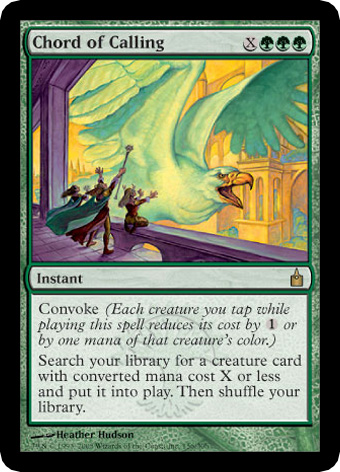 That beauty right there bears the watermark of the Selesnya Conclave. Got it?

What do you mean, “What does that mean?” Ahem.

Ravnica: City of Guilds showcases four “guilds,” or two-color combinations. Each of the combinations has a shared philosophy, a style of play, a keyword mechanic, and a symbol that appears behind the text of each card related to that guild. The keyword “convoke” is the sole property of the green-white guild, known as the Selesnya Conclave. Hence the watermark.

As Rosewater will surely explain in great detail in the upcoming weeks, each of the four keywords in Ravnica was submitted by a different member of the design team. Convoke was the brainchild of none other than The Original Doc G himself, Richard Garfield.

Richard originally pitched the mechanic as an idea for the red-white guild, and he called it “battlecast.” His idea was that the mechanic would only appear on combat-related instants, and the flavor would be that your creatures are all battlemages of sorts, capable of casting their own spells while in the throes of mêlée. While the flavor was solid, the narrowness of application of the mechanic in red-white was a problem.

Luckily, the green-white guild was in need of a mechanic as well. The flavor of that guild is one of a commune, full of creatures helping one another out. The green-white guild is also the one most adept at putting more and more creatures on the table (see the preview of Selesnya Guildmage for an example), so “battlecast” seemed like a perfect fit. We expanded the mechanic to cover creatures, enchantments, and sorceries as well as instants and renamed it “crittercast” for playtesting purposes, later improved to “convoke” by the creative team.

The card itself was the brainchild of one Mons Johnson, game developer and goblin extraordinaire. Off the cuff one day late in design, he suggested what he felt would be a good card for green-white:

, Instant, Search your library for a creature card with converted mana cost X or less and put it into play.

That card seems nice and fair; after all, Eladamri's Call from Planeshift cost

and tutored for a creature, and if you are paying X to put the creature into play, you can't do anything silly like Tinker or Tooth and Nail do. We put it into the file without hesitating.

Of course, the card was too fair to be interesting most of the time, so we spiced it up by giving it convoke—a natural fit, really, as the scalability of the card really rewards you for having more creatures in play. Some shifting of rares occurred in development that caused this card to end up as just green and

in its cost, but I feel that's a benefit as it opens up the card for use in decks other than green-white.

The card has been both fun and powerful for us in playtesting, and I'm sure you all will enjoy finding interesting things to do with it. Enjoy the prerelease events on September 24-25!

Tips on playing cards with convoke:

As we hoped, the format continues to grow. I am anxiously awaiting the attendance numbers from the two upcoming Legacy Grand Prix events.