Posted in Latest Developments on May 9, 2003

of the things R&D tries to do when designing and developing the small expansions that round out a block is to find a new twist for the mechanics that were introduced earlier in the block. In Scourge, for example, there are morph creatures with reveal costs that don’t include any mana. Now when you’re wondering what your opponent’s face-down creature is, there are several possibilities for you to consider even when he or she is tapped out. 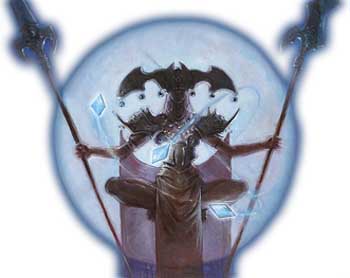 For cycling, Scourge includes two new variations: landcycling and the Decrees (which the design team called “supercycling.”) You’ve probably already read a bit about landcycling either on the Scourge product page or in Mark’s article—it works pretty much like it sounds like it works. If a creature has forestcycling then you can pay 2 and discard it from your hand to search your library for a forest card and put that forest into your hand. It’s not a terribly exciting mechanic, but it’s not supposed to be. What it does do—quite well, actually, since we put it exclusively onto big creatures—is allow you to play with more extra-large monsters in your deck. Especially in Limited formats, this allows the “Size Matters” theme of Scourge to shine. What would you rather put in your deck: land #17 (or 18) or a big creature that can double as a land if you really need one?

So that was one direction that the Scourge designers went with cycling—they created a variant which is a nice utility mechanic that won’t knock anyone’s socks off, but does help the set play better. (By the way, yes these do count as “cycling” for purposes of Lightning Rift, etc.) The other direction they went was the direction they went with almost everything else in the set: large.

The “supercyclers”—a cycle of five rare cards—started by taking the cycling triggers in Onslaught and then wondering what would happen if the effects you got from cycling were big, meaty, spell-sized effects. The initial design had things totally reversed from Onslaught in the sense that the base spell was small and the cycling trigger was a (much) bigger version of the effect. So, for example, the original version of Decree of Pain gave target creature -2/-2, but if you cycled it you got to give all creatures -2/-2.

This led us to have a fairly detailed conversation about what constituted the essential flavor of cycling. In the end, we concluded that part of what it means to be a cycling card is that you can hold the card until the right time to get full use out of it, or you can cash it in, hoping that the top card of your library is what you really need. Well if the cycling trigger was a bigger effect than the spell itself, then you’d be holding off on casting the spell until you had enough mana to cycle it. That just felt wrong when we tried it out, and what we eventually figured out was that it felt wrong because it violated the fundamental flavor of cycling.

That said, there was still something cool about the supercyclers. The basic idea of cards with big effects when you cycle them fit into the Big Stuff theme of the set nicely. The trick was to figure out how to do them while still staying true to the essence of cycling. This one wasn’t a super-difficult puzzle to solve: the development team kept the cycling triggers the same but we changed all the base spells so that they were huge versions of those effects instead of small pieces. The actual Decree of Pain, for example, destroys all creatures and lets you draw a card for each creature destroyed in this way. Or, if you prefer to cash it in, you still get to give everyone -2/-2, plus draw your card from cycling. (If you want to see Decree of Pain, it is previewed—along with several other Scourge cards—in this month's InQuest magazine #98. This month's Scrye magazine #60 also has several exclusive card previews.)

That’s the basic story behind the Decrees – each color got a rare “supercycler” and each is known as Decree of [Something]. The flavor and the art represent the decrees that Karona gives to each color, as Rei Nakazawa hinted at in his article earlier this week.

My official preview card for this week is Decree of Silence, the blue supercycler: 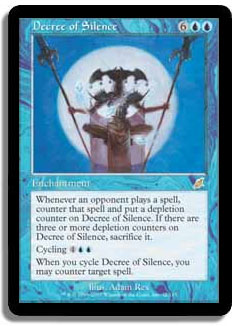 The very first blue supercycler made Bird tokens, but that wound up getting tweaked into a white card because once we decided the Decrees were going to be so powerful that they needed to be rare, our enchantment removal spell that cycled for a Tranquility effect just wasn’t worthy. For a while, blue had a counterspell that could cycle to counter two target spells. We knew that ability wouldn’t come up very often, but it was intriguing to think of times when there actually would be two spells on the stack at the same time and you really did want to counter both of them. (This comes up more with storm than with anything else, for whatever that’s worth.) Once we figured out our general cycling philosophy we decided to stick with a counterspell that could counter multiple spells, but we went with this more generally useful variant instead of a card that required multiple targets to all be on the stack at the same time. And when you cycle it, it mimics Dismiss.

Look for previews of some of the other Decrees on www.sideboard.com soon, and watch out for them at the prerelease!

Although Bladewing made a respectable showing, the real winner was Form of the Dragon. When flavor combines with function that well, the result is a beautiful thing.

Note on Last Week’s Poll Commentary:
Several of you emailed me concerned that I misunderstood the results of the poll question I asked about who was planning to play in the MTGO Worlds Qualifier. The number of “yes” votes was pretty small and I commented how it’s always interesting to be reminded of how small the hardcore tournament-playing portion of Magic’s audience actually is. I got a bunch of mail pointing out that there are lots of tournament players who just don’t want to (or can’t afford to) play Magic Online. Yes, you’re right, that’s obviously a big reason why those numbers were low. I didn’t comment on that fact because I had previously asked enough questions about Magic Online participation that I already know approximately what portion of you use it. This was the first time I got a read on the size difference between the MTGO-casual crowd and the MTGO-tournament crowd, so that’s what I commented on. Sorry for the confusion.

Posted in Latest Developments on May 9, 2003