Talk to the Hand

Friday the 13th, kids, but luck is on your side. After all, you get to see this spicy little nugget: 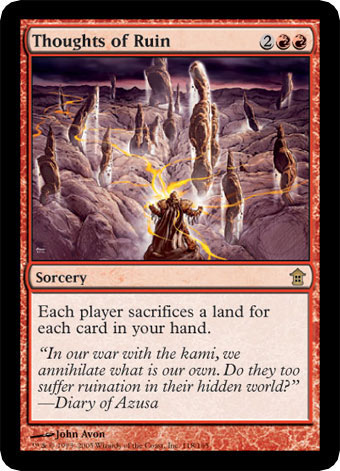 In the words of Shawn Carnes from the original Pro Tour I videotape, “That's Armageddon, baby!” We've made several variations on that old favorite

sorcery in the past few years (Anyone remember Global Ruin? Epicenter? Myojin of Infinite Rage?), but here's one that can finally claim to be in the same league as the original. And in some ways, it's even better. Somewhere, Zo-Zu is drooling.

Every third set needs a new twist—Mark hinted at this on Monday and will expound further this coming Monday—and Saviors' is that “hand size matters,” a mechanic we've nicknamed “wisdom” (as in the iconic Weatherlight uncommon Gerrard's Wisdom).

There were a lot of issues with getting this theme into shape, most of which were centered on bad or annoying play experiences. It's easy to keep track of how many creatures or permanents your opponent has in play—just look at the table. Your opponent's life? Just keep track of it yourself on your scorepad. But the number of cards in your opponent's hand? That's usually difficult to determine without asking him directly (unless you play on Magic Online, where these issues don't really apply).

When we played with Saviors during development—especially in limited games, the following exchanges were often heard.

With all this somewhat irritating information-gathering going on, we had to make sure that hand size mattered enough to be worth it. In other words, the cards had to be interesting enough to counterbalance any negativity generated by suddenly having to micromanage the number of cards in hands all over the game. To that end, there are several of each of the following types of cards:

Thoughts of Ruin falls into group number five on that list (spells that care about the number of cards in your hand), which is my favorite. You never need to ask anyone anything when playing with this card. You know how many cards are in your own hand, and that number only matters once. You never need to suspiciously ask the dreaded “Cards in hand?” question.

The card started out in design with your hand sizing in a very different way. Originally it forced each player to sacrifice all lands except for a number equal to the cards in your hand. From Multiverse:

bs 6/7: supposed to be "sacrifice down to"
RB 6/10: No, team prefers to maintain the stance of always rewarding you for having lots of cards in your hand.

As you can see, designer Brian Schneider commented that the card's original intent was to replicate Armageddon once your hand was empty. The problem with that card, as lead developer Randy Buehler noted, was that just about every other “wisdom” card in the set rewarded you for having many cards in your hand. The original version just didn't fit into that scheme.

Design's original version rewarded what I like to call “pants-down” play. You'd deploy a stream of permanents early in the game, probably cheap creatures and maybe some mana artifacts, and then once Thoughts of Ruin was the last card in your hand, assuming you had actually managed to get superior board position, you could simulate Armageddon. You'd end up no lands and no cards in your hand—hence “pants down”—leaving you pretty vulnerable if your opponent had been anticipating this play.

That card sounds kind of fun, but that wasn't what the set was after. Cards in hand are good in this world, and the block already has plenty of stuff to enable that, such as the Moonfolk and Ninja, as well as individual cards like Sensei's Divining Top, Gifts Ungiven, and Sosuke's Summons. The newer (printed) version of “Hand Size 'Geddon” is a lot more complex and subtle card than the “pants-down” version.

One card that springs to mind as a possible combo with Thoughts of Ruin is Trade Routes (one of my favorite cards in Eighth Edition). Not only does its ability let you take your lands off the table to protect them from being destroyed, but by doing so it increases your hand size so that more of your opponent's lands will end up in the graveyard. I'm sure as you begin to play around with Saviors cards over the next month you'll see other nifty combos revolving around this nasty red sorcery.

It's funny… during development, both Paul Sottosanti and I petitioned the team to reword the card so that it looked more like Invasion's Global Ruin, meaning we wanted each player to choose a number of lands and have the rest be destroyed instead of sacrificed. We lost, obviously, because, as Randy put it, “This template is SO much simpler that we want to stick with this functionality.”

Why exactly did Paul and I want to change it? So that it worked better with Darksteel Citadel. Of course, that point is now largely moot, as the Citadel is banned in Standard along with its artifact land brethren. So kudos to the development team for sticking to their guns!

For a chance to be among the first to play with Thoughts of Ruin and the other great Saviors of Kamigawa cards, check out the info on the upcoming prerelease events here. Only one week away!