Thing of Many Decks

Posted in Latest Developments on October 29, 2010

aking Magic is one of the most fun jobs I've had, but it can sometimes be lonely. We spend hours and hours working on cards, trying to sculpt environments and make Magic as fun as we can. We often have a good idea what will happen with cards before we make them, but in many ways we work inside an echo chamber. For us, there is a long delay between finishing work on a card set and seeing what the printed cards do in the real world. We love the feedback that we get from the audience, and waiting several months to get it can be frustrating.

As you might expect, some of the most fun we have from watching the real world happens soon after a set releases. When you do things that we expected to happen, we get to feel smart, which is fun. When you do things that we didn't expect to happen, we are surprised, and most of the time it's fun to see what happened. Occasionally you discover something that we didn't expect, and most of the time we're excited to see what you found. Sometimes there's something that we all thought was both strong and cool, and you don't collectively latch onto it, which can be sad. No matter what happens, though, it's fun and instructive for us to watch it.

I can't speak for other developers, but looking through tournament deck lists and results often triggers memories of developing the set in question. Today, I'll take a walk through some recent deck lists and tell some related stories. 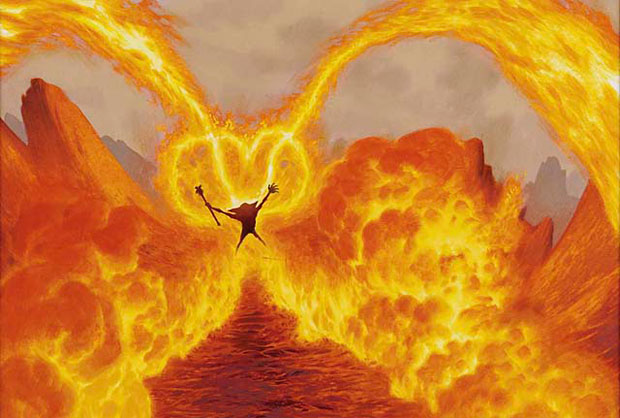 We did not think of the five Zendikar Ascensions as Constructed cards during development. We understood that Luminarch Ascension would likely show up as a sideboard card at some point, but our attempts to find Pyromancer Ascension and Beastmaster Ascension-based decks that were strong enough for Standard or Block Constructed did not succeed. I always thought that was too bad, as having a rare cycle of cards with a tight naming convention that has no Constructed-strong card in it is a great recipe for player disdain. "The Ascensions? Yeah, those all suck." On the other hand, one or two flag-bearer members of the cycle can save everything. For example, many players have positive associations with the cycle of Oaths in Exodus thanks to Oath of Druids and to a lesser extent Oath of Ghouls even though the other three didn't see much play. 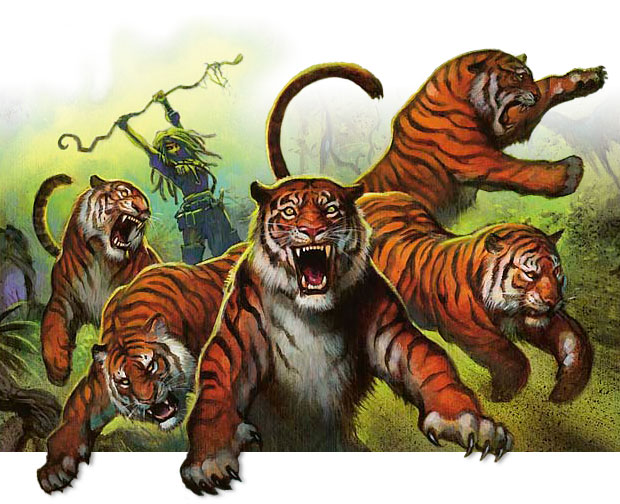 I was quite relieved, then, to see Beastmaster Ascension stake a strong claim to status as one of the strongest decks in Zendikar Block Constructed at Pro Tour–San Juan. I suspected at the time that we would be seeing more of Beastmaster Ascension in Standard after Shards of Alara block rotated out, and Magic Online results indicate that this is the case. I was even more relieved at U.S. Nationals this year to see Pyromancer Ascension become a real deck. Although Beastmaster Ascension is part of a relatively normal creature-based deck, Pyromancer Ascension is a deck so far off the normal Standard map that it feels like you're playing a totally different game. Although I don't want the "different game" to become the norm, I like that it's available in Standard if you're looking for that. It feels very similar in its role to the Seismic Assault / Swans of Bryn Argoll deck from a little over a year ago, and I'm glad that there's a deck out there that does that.

I found a further surprise when I was looking for Pyromancer Ascension decks: 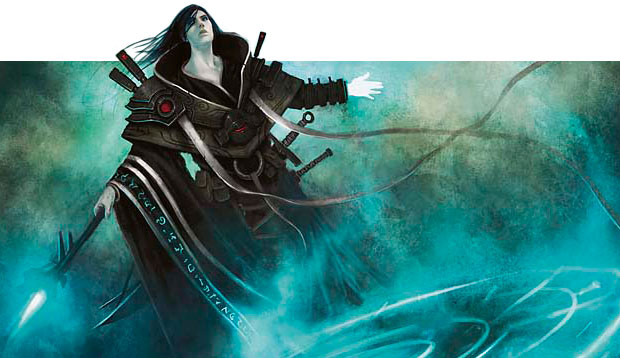 I won't claim that this list is a consistent tournament contender, as this is the only copy of anything like this I've seen yet. More than any other person internally, Ken Nagle loved Traps, and built several Trapmaker's Snare-based decks. I didn't expect that card to be a Constructed all-star, but I did want it to be attractive enough to build decks around in more casual arenas. We don't get much data about that, but when I see decks like this every once in a while doing well enough to get posted in the Decks of the Week, that's good enough for me to know that there are people out there having fun with this.


There are a lot of things going on here that make me happy.

I was part of the Vampire team for Zendikar development. Blade of the Bloodchief evolved out of a card that we made, and I was always a little sad that a card that screamed "VAMPIRE!" so loudly was ignored by actual vampire decks. With Viscera Seer and Bloodthrone Vampire though, it's good enough. 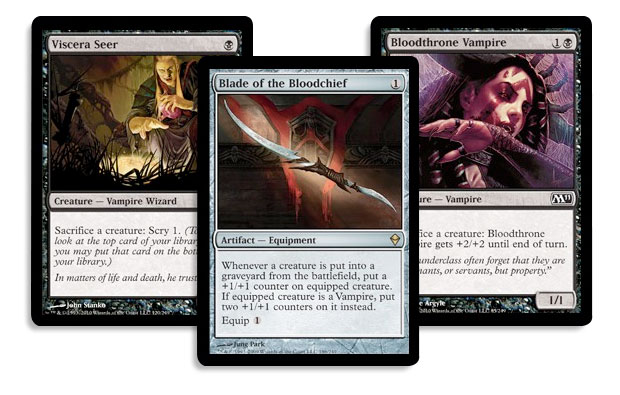 Captivating Vampire is a totally sweet card to me. Mind control as a trope has been associated with vampires in many places, and Magic has a rough time with that because control effects are often blue. Here we managed to get that onto a Vampire, but it didn't show up in Standard immediately. With the rotation, though, he's good enough, and Vampire decks are playing enough Vampires to activate him. That's awesome. 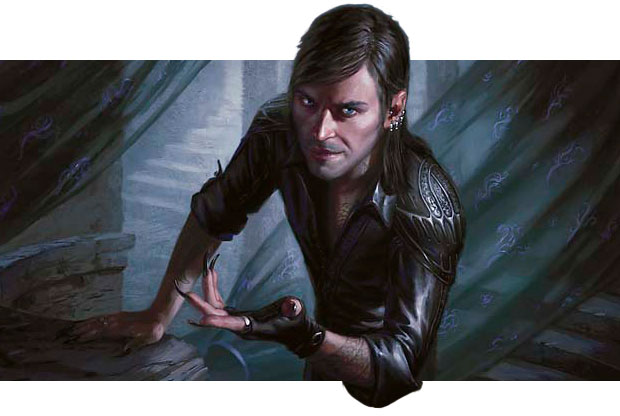 The details of this deck indicate that the answer cards we're putting in are good enough to be worth using. Bojuka Bog, Tectonic Edge, Vampire Hexmage, Duress, Memoricide, and Brittle Effigy were all built to let people solve weird problems in decks that might not otherwise be able to, and this deck contains all of them. That tells me that our cards are working.

I want to deviate from Constructed to talk for a moment about the following Limited deck, which Jason Hager drafted on the way to winning a Pro Tour Qualifier (and a trip to Paris) in Louisville earlier this season.


When Scars of Mirrodin was handed from Design to Development, there was a red theme of sacrificing your own stuff for benefit. This theme is still present in cards like Barrage Ogre, Kuldotha Rebirth, and Furnace Celebration, but there used to be much more. There were also cards that read "When you sacrifice CARDNAME, 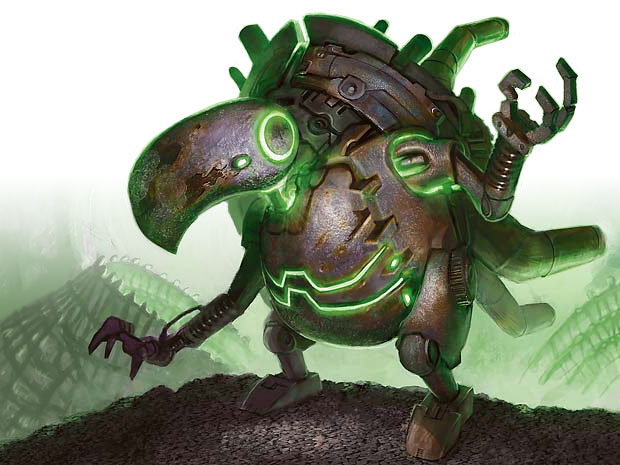 Rather than fight that confusion and general lack of appeal, we reduced the theme in number and changed some cards from "Whenever you sacrifice CARDNAME" to "Whenever CARDNAME is put into a graveyard from the battlefield." (That's where Perilous Myr came from, if I remember correctly.) However, we kept a few cards, like Barrage Ogre and Furnace Celebration, so that the theme could come up in the right quantity. Mark Rosewater was sad that his theme was reduced in number; I was happy, but hoped that it would still show up enough to add texture. Both of us were happy when I was able to email him this Limited deck, as it shows that Mark's vision is still present at a high enough level to matter.

Let's go back to Constructed now.

4 Quest for the Holy Relic


There are once again several things going on in this deck that I like.

White attack decks are popular, baseline strategies that many players gravitate toward when deck building. When we aren't careful to sculpt an environment so that such decks are playable, they often aren't. Based on how many decks there are that look like this in the Magic Online results, this is a fine thing to be doing. 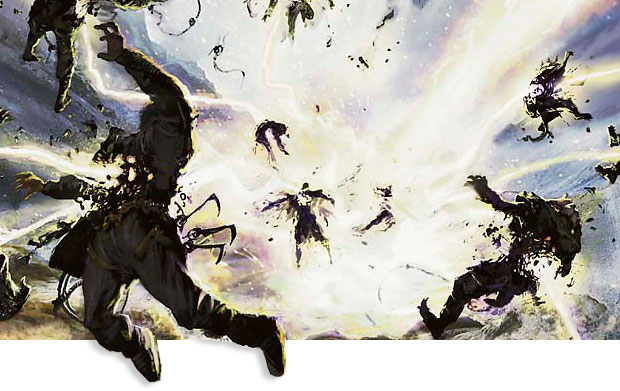 Both as a player and a developer, I like attack decks to have lots of play into the late game. I find it frustrating to be left with nothing to do after a Day of Judgment or two and have to sit there miserably. I find it sad to watch other people have to do that. For a deck with four Ornithopters and four Memnites, this deck has shocking amounts of play into the late game with Squadron Hawks and equipment found by Stoneforge Mystics.

Squadron Hawk and Quest for the Holy Relic are two cards that I personally think are pretty cool, but wasn't sure would find a home in competitive Constructed. I'm happy to see them hanging out here.

Let's go to one last deck for today. 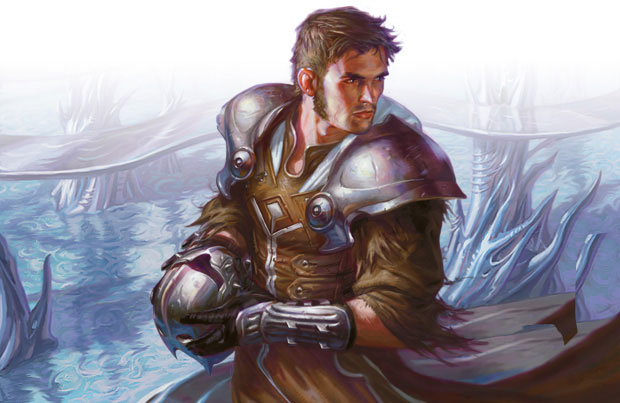 One of the cards I had the most fun with in the Future Future League while we developed Scars of Mirrodin was Venser, the Sojourner. For quite a long time, I didn't see any results that included decks with Venser, which had me worried. I'm not usually attached to one particular card or deck being powerful, but I knew from playing Venser that he was really fun. We err on the side of making things that we identify as being extra fun a little stronger, and Venser was something that I thought was totally sweet. As it turns out, finding the right deck for Venser just might have been tricky. On the surface, he seems to want to be in a base white-blue deck. Perhaps it could look something like this deck, which I played in the Future Future League at the time of Scars of Mirrodin development:


Michael Svein might sneer at my deck, as he has a strong claim that a Venser deck is supposed to be base blue-red instead of base white-blue. Although I'm maximizing Venser a little more, which is appropriate when I'm playtesting the card, he won a State Championships tournament. At this point, I'd say that he has the chips.

As I said at the beginning of this article, we love seeing what everyone does with the cards we make. Although we love hearing back from you in articles, tweets, and emails, the best feedback we get from you is seeing what you actually do when you play, be it through reading your tournament results or from traveling to events and playing against you in person. Both of those things are fun for us to do, and we couldn't do it if you weren't all out there playing. Thanks as always, keep up the good work, and we'll keep putting out more cards for you to explore.

Posted in Latest Developments on October 29, 2010