Three Things I Get Mail About

don't typically tend to ask for reader mail the way my pal Mark Rosewater does. Additionally, I don't have the reputation that he has somehow cultivated for himself as being The Guy That Creates Things, The Guy That Decides Things, and The Guy That Ruins Things all at the same time, so I don't get the volume of mail that he does. And I'm okay with that. But in the last few weeks my inbox has been bursting at the seams, mainly on three topics, all of which deserve a bit more discussion.

I have never written an article about the card Flash, the revoking of errata to said card, or the newly-restored card's massive impact on the Legacy format including the upcoming Grand Prix-Columbus, yet it is the topic that is currently dominating my inbox.

If you do want some reading on the topic, I did answer an Ask Wizards pertaining to it, and Brian David-Marshall's column that is running alongside mine today talks about Legacy and the impact of Flash (and I suspect my name appears in it once or twice). The best summary of the issue from both the policy and player perspective, however, has to be Kevin Binswanger's article "Unlocking Legacy – Flash" that appeared on the StarCityGames website earlier this week. I spend far too much time reading Magic articles on the 'net, and it is gems like Kevin's that make me feel like that time is well spent.

As the Director of Magic R&D, I have my hands in lots of things; as such, I'm the only guy on both the Rules Team that updates Oracle and the DCI Events Team that makes B&R changes. Both teams have wildly different goals, and I must act as a responsible member of both. So when, as a member of the DCI, I raise my arms to the roof and holler, "How did this ever happen?" I have to sheepishly raise my own hand as a member of the Rules Team and explain the process to myself again.

I will remind everyone of the reality of the Rules Team's constant struggle with Oracle with a quote from my "Power-Level-Errata-B-Gone" article:

Making changes in Oracle is, unfortunately, not terribly scientific. [...] What usually happens is an editor, developer, judge, tournament organizer, or rules guru brings an issue regarding inconsistencies on older cards up to [Rules Manager Mark] Gottlieb, who then adds it to a list of "Oracle issues." Prior to each new set's release, a bunch of us meet to discuss all of Gottlieb's collected issues and weigh in on how he proposes to solve them. After all that, cards get updated in Oracle and the cycle begins anew.

One error with Flash was discovered as part of a pass to remove "unverifiable fails" from certain cards. Under old wordings, if you activated an Elvish Piper and then didn't put a creature card into play, a judge had to be called to verify that your hand contained no creature cards—you had to put one into play if it was possible as part of the effect's resolution. We've solved this exact problem with the phrase "you may" on many other cards, and Gottlieb wanted to add you may to everything that had the potential to result in an unverifiable fail, which happened to include Flash.

As he reworded Flash to include "you may," he noted that the card's Oracle text didn't match the printed functionality—error number two; it had been the victim of power-level errata at the same time most of the other offenders (Great Whale, Priest of Gix, Karmic Guide, etc.) were as it combo'ed with some truly broken cards from Urza's Destiny—Academy Rector and Yawgmoth's Bargain—to do some truly broken things. With Flash now relevant only to the older formats, and Yawgmoth's Bargain banned in one of those formats, removing the errata not only felt correct from a policy standpoint, but it actually felt safe as well. After all, nothing bad had resulted from the previous round of removing power-level errata in Vintage or Legacy, so we certainly didn't expect the firestorm that has come from the change to Flash.

Regardless of whether we expected it, or whether we think the resulting circumstances are unfortunate (we do), things are as they are for Grand Prix—Columbus. We've sworn off emergency bannings, and the arising of one combo deck in one format for one event isn't going to change our minds on that front. We have intelligent, effective policies in place for banning and restricting cards and will be adhering to them as per usual.

As the card polarized people in R&D, so the Steamflogger Boss has polarized my readers, and, I'm sure, the bulk of Magic players as a whole. Some can appreciate the absurdness of the joke; others don't think "regular" (as in "not Unglued or Unhinged") Magic sets are the place for stunts like this.

To the first point, from "Apeiron" on our boards:

Man do I feel cheated. So this card only purpose was to have nonsense written on it?! For real? Sigh... I know they warned of these red herring stuff, but I believe this went a bit too far.

Part of the fun of reading magicthegathering.com is finding out things you didn't know before. Sometimes (most of the time, I hope) those things are entertaining and fun and make you feel more connected to the game somehow. Other times, to show that we don't have much to hide, we talk about less savory things like bad rares, bad mechanics, and development errors. If you want to know how sausage is made, visit the sausage factory. If you don't, and just want to enjoy your sausage without thinking too much about how or why it exists, by all means stay home and enjoy it. I know there is a certain percentage of our audience that would make it through their weeks in better moods—and probably be happier with Magic—if they never read the things Mark and I had to say, and instead returned to that ignorantly blissful phase where they thought new Magic cards mysteriously materialized on the shelves every four months without the influence of "people."

So I'm sorry that finding out my intentions ruined Steamflogger Boss for some of you, but that's what finding things out will do sometimes.

Now I will come down off my high horse and say that I'm sorry the card was a rare. Having your rare—the crown jewel of your booster pack—be a goofy card that is mostly unusable is never going to be a great feeling, and the joke could have been pulled off at uncommon just as well.

I don't anticipate us doing any more "just for fun" style cards in normal sets any time soon. I remember a discussion I was having with the Jelly development team about potentially putting a card in the set that was also in Butter, the set before, so you'd get the exact same card two sets in a row. It was Doug Beyer that said, "Stuff like that is funny to hear about and read about, and fun to talk about, but it stops being funny once it's in your pack." Point taken. 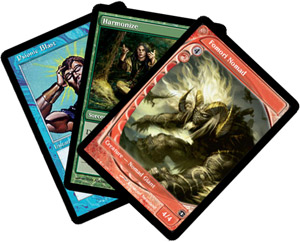 The variety of card frames debuted in this block has led to some interesting discussions regarding the current status quo. It seems that our successes with the alternate Planar Chaos frames and the futuristic Future Sight frames has caused people to question our run-of-the-mill "Eighth Edition" frames more.

Yes, the Eighth frames are the way they are on purpose, by design, and all that, and don't exist solely because we were incapable of producing anything else. What the Eighth frames have going for them above the Planar Chaos, Future Sight, and older frames is that they are the most functional, meaning the most readable and have the information on them organized in the best way. By default, that means that they aren't the most "fantasy" of the choices.

Is there room for improvement? Possibly. I'm no graphic designer, but I can certainly appreciate some of the commentary on our current frames; making actual changes to address those concerns that still leave us with all the functionality we need is easier said than done. And even if we were to spend time looking for ways to pretty them up just a little bit more, is it worth altering them again so relatively soon for minor upgrades? I have a hard time saying yes to that one.

I will, however, file away all the input I've received on frames over the course of this wacky block for the day the milestone approaches where we'd consider redoing frames again.

Thanks for reading, and feel free to send me mail. Your mail is a great window into the community.