talk about my man Tom. Tom is a tough customer from a tough family – his fiery gaze hints at the anger boiling up within him, ready to be unleashed at the slightest tap. Tom, of course, is Planar Chaos’s Prodigal Pyromancer, given that catchy moniker during the set’s design phase as a nod to his blue predecessor, “Tim” the Prodigal Sorcerer, who earned his nickname from fans of the movie Monty Python and the Holy Grail – which featured, ironically, a pyromancer of that name. 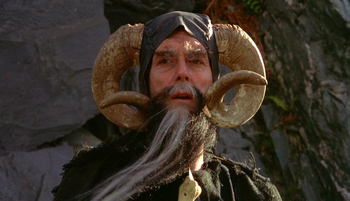 King Arthur: What manner of man are you, that you can summon up fire without flint or tinder?
Tim: I... am an enchanter.
King Arthur: By what name are you known?
Tim: There are some who call me... 'Tim'

Tom tells me he wants to thank art director Jeremy Jarvis for the sweet rendition he did on the card, but he’s looking forward to igniting whoever came up with the flavor text (but maybe I’m projecting).

“Tim” and his droves of copycats and followers, including, but not limited to, Rootwater Hunter, Zuran Spellcaster, Thornwind Faeries, Pirate Ship, Mawcor, Apprentice Sorcerer, Capricious Sorcerer, and, of course, Wu Longbowman, are all blue cards, as that was the color the “ping” (tap to deal one damage) mechanic was doled out to in the game’s infancy. 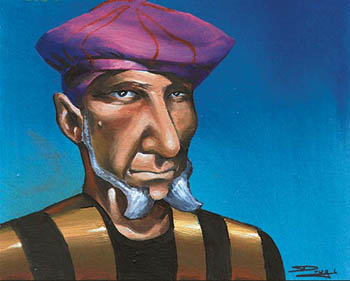 In more modern times, as we have tried to (a) give each color more focus, and (b) take some stuff away from the almighty blue, the My Super Ex-Girlfriend of colors, the “ping” ability has joined the rest of its damage-inflicting friends in red. Granted, the ability always wanted to be red anyway – cards like Anaba Shaman, Fireslinger, and Kris Mage were showing up in red with the most minor of variations on the traditional clean “ping” mechanic during the time when that ability was supposedly blue. So I guess we just properly took it away from blue; we didn’t have to add it to red as it was more-or-less always there.

Now let’s talk about the Core Set. The Core Set does many things, including help define the Standard format. But the most important function of that product is to introduce new players to the game, its concepts, and its colors in as simple a way as possible. So any time we shift a mechanic from one color to another, I try to push for the simplest execution of that mechanic in that color to be done as a card so that we have the option of using that card in the Core Set later.

When “pinging” moved to red officially, it was on the back of not-so-simple cards: Arcane Teachings. Embershot Goblin. Goblin Sharpshooter. Chainflinger. The Core Set was stuck with (and still currently employs) the Homelands all-star Anaba Shaman – not a bad card for such purposes, but not perfect. So I – and many others – have been trying to get an exact red Prodigal Sorcerer into sets for years.

Suddenly, he’s in the Planar Chaos design file as “Tom.” Here’s his big chance. We need to do color-shifted versions of old cards, and that’s exactly what he is.

As development heated up, “Tom” became a term used to describe any timeshifted card that moved into the color that is “correct” under modern color theory. In other words, if a timeshifted card was moved into its “normal” color – you wouldn’t blink if the card was printed in a Core Set or a set like Champions of Kamigawa – then it was called a Tom. Examples of other such cards are the red Pestilence (Pyrohemia) and Elvish Spirit Guide (Simian Spirit Guide), the green Soul Warden (Essence Warden), and the white Muscle Sliver (Sinew Sliver). Any of those cards could theoretically be printed any time.

And that was the point developer Henry Stern made when he expressed that the “Toms” didn’t belong in the set. After all, he said, “These can be in any set.” They weren’t “alternate reality” enough; instead, they were very much “actual reality.” In a set supposed to be full of wacky mind-bending color shifts, the Toms were little pockets of normalcy that some, like Henry, felt detracted from the set as a whole.

“But we’ve tried and tried,” I argued, “and we’ve never printed red Tim in a normal set! It has never happened! We always have a reason to change it somehow! Now, we finally have a reason to leave it the same and make the card.”

One last note on the term “Tom”… it led to one of my favorite Multiverse comments of all time. The comments were put on the now-deceased blue version of Preacher:

Due to a technical glitch, here is last week's poll again: