Posted in Latest Developments on January 13, 2012

ello. How are you? It's been a while, and I love what Zac's done with the place, but you've got me for today.

I led the development of Dark Ascension. Today marks the end of the first week of previews. You've only got two weeks before the Prerelease. Buckle your seatbelts, as my preview card today might make your head spin.

Before we get to that, though, I should introduce my team, without whom I could never have made the set.

That's me. Before Dark Ascension, I led the development of Masters Edition III, Archenemy, Masters Edition IV, and Magic 2012. I was also on the development teams for Magic 2010, Worldwake, Magic 2011, Mirrodin Besieged, New Phyrexia, Innistrad, and "Hook," and was on the design teams for Magic 2011 and Innistrad. Until very recently, I wrote this column. This past November, I jumped from Magic R&D to Dungeons & Dragons R&D, where I'm working on the next iteration of the D&D core rules.

Mark Gottlieb has worn many hats. For years, he served as the Rules Manager. When his brain threatened to melt down, he joined the development team instead. Mark led the design for Mirrodin Besieged. The main thing you need to know about Mark, though, is that he is bananas. To get an idea about how bananas he is, I suggest you go back through his archive on this very site. He wrote the Johnny deck-building column for a long time and he brought to Dark Ascension the same creativity he brought to that column. When I needed a clever line of text to solve a problem or a wild card to fill a rare hole, Mark was almost always there for me.

We stole Zac from the Pro Tour right after his first Top 8 at 2009’s Pro Tour Honolulu. He has since put those skills to work in the Future Future League, on product development teams, and tirelessly building FFL decks. On this project, Zac served as a representative from the Dark Ascension design team. At different points in the process, Zac alternately defended elements of his design colleagues' work when he thought they were important and threw them under a bus when he didn't.

I recently had the privilege of being on the Magic 2013 development team, which was Zac's first time leading a set. I got to see him do some amazing things with Magic 2013 and I look forward to the first time I get to draft that set with physical cards.

Dave manages the Magic R&D development team. Dave brought a rare pedigree with him when he joined Wizards, as he has both an extensive card-game production background and a Magic Pro Tour Hall of Fame ring. Dave tended toward the quiet side during Dark Ascension development meetings, as he was still somewhat new to Wizards at the time, but he always had dynamite and incisive opinions about technical decisions when I needed his input. You'll see Dave's first solo work in Avacyn Restored, for which he was the lead developer.

Ken manages the digital side of Magic R&D, which creates products like Duels of the Planeswalkers and the mobile app. Ken was placed on my development team to learn more about paper Magic R&D processes. He wasn't an experienced card-game developer at the time, but he's managed a lot of game products, knows when something isn't working, and isn't afraid to call you on it. That often helped me figure out what I was supposed to work on next.

Small sets present different problems to Magic designers and developers than big sets. The big set defines creative, mechanical, and environmental direction for an entire block. Innistrad has gothic horror flavor, flashback, and an environment that allows for weird and plodding graveyard decks, so Dark Ascension has to follow that up in a satisfying way. 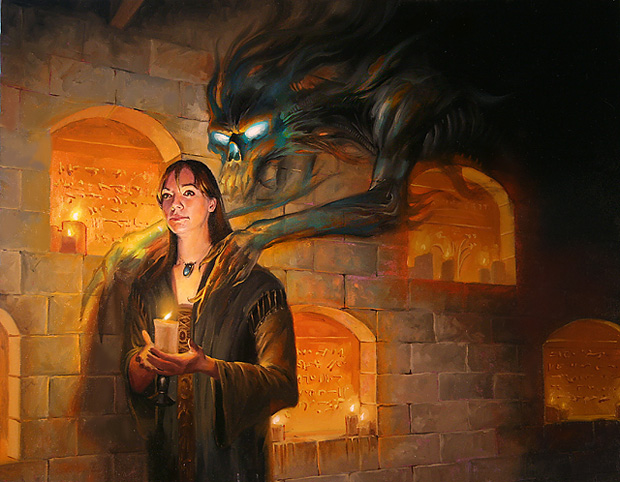 However, we can't only have more of the same. Things need to change just a little bit so everything still feels fresh. The challenge, then, is to find the right way to bring novelty to what the big set did.

I read some forum posts last fall that complained that Innistrad's double-faced cards only featured creatures. A few even said that we had run out of ideas if we could only come up with creatures. I found this amusing, as we found many things double-faced cards could do very early in Innistrad design. Mark Rosewater chose to do them this way so we could expand past that in Dark Ascension. I believe he chose correctly.

I could argue this based on simplicity. Double-faced cards are a huge departure from existing Magic cards, have tons of words on them, and require nontrivial rules support to work. Even the simplest double-faced cards ask much of a player the first time. However, working on RPGs has given me a new lens to view games through, so I'll give you a different argument.

If you'll indulge me for a moment, here is a brief retelling of The Lord of the Rings.

"Two short people save the world by throwing a magic ring into a big volcano."

Was that sentence awesome? Can you imagine a trilogy of hit novels and movies based on this sentence? Could you lend a dog-eared single sheet of paper with this sentence on it to a friend, not caring whether or not you got it back because you wanted to share something you loved that badly? Of course not.

Among many other things, Magic cards tell stories. While we can tell stories in flavor text, we can tell more personally impactful stories with card text. For me, the real opportunity to express story through creating a Magic card is to decide what I want the players to feel, then build the text box to make them feel that.

To be fun, stories require room to begin, grow, come to a climax, and end. Just like The Lord of the Rings saga, the Scars of Mirrodin block story would have also been lame in one sentence. "Phyrexia takes over Mirrodin" intrigues the mind, but without plenty of time for storytelling is positively anticlimactic.

As I mentioned before, we put double-faced cards with non-creature faces into Dark Ascension. Here are two examples. 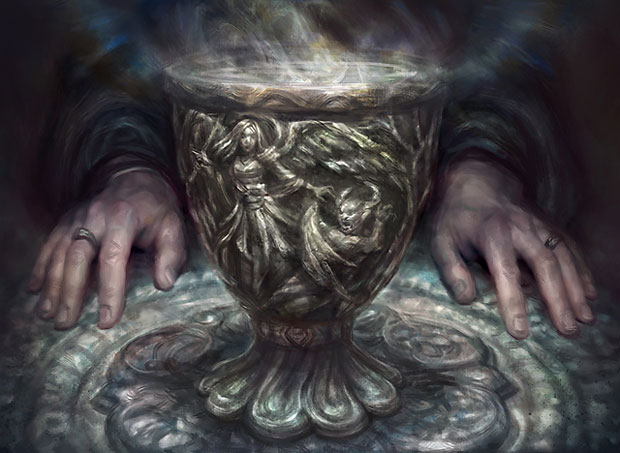 Chalice of Life and Chalice of Death | Art by Ryan Yee

We also have several cards with new and idiosyncratic transformation mechanics that attempt to express horror tropes that Innistrad excluded due to lack of room.

However, a happy accident during development showed me another space double-faced cards could move into. A month or so into Dark Ascension development, I felt the set was missing some pizzazz in the mythic rare slot. I'm not much of a pizzazz mythic rare guy, though, so I pulled Aaron Forsythe and Mark Rosewater into Mishra's Workshop for an hour and a half. We riffed back and forth on random ideas, eventually creating several of the mythic rares that ended up in the final set. 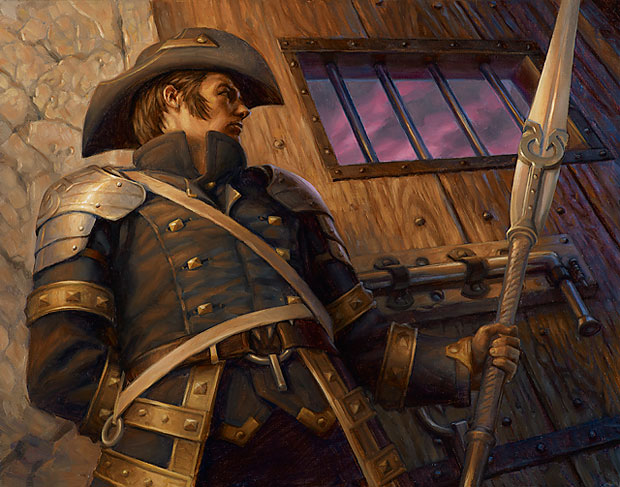 I wanted to get a mythic rare werewolf out of that meeting, as it would be a pity not to do one before we moved away from double-faced cards. Aaron Forsythe delivered, creating my preview card, and by doing so hit on the idea that cards could trigger upon transforming to a side. This idea works fairly well for werewolves—check out the art and flavor text on for just one example of possible flavor. I decided I wasn't satisfied with just one of these, and Aaron's was more complicated, so I made a second one. A werewolf that just flips out and breaks stuff? No problem. We got that werewolf.

While this card has a heavy dose of mechanics, it reads reasonably to me. Aaron was not thinking so small when he made my preview card. The card you're about to see has 96 words between its two text boxes. That's more words than the Oracle wording of Ice Cauldron. It's a monster. 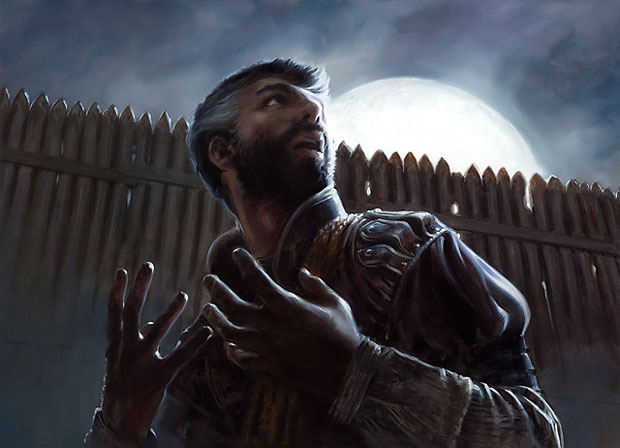 Funny things happen when I put a card like this into a file. First, people forget the front face by the time I get to the back face. Then they laugh, because there is poetic humor to the design. Then I put it in the file. Then people leave Multiverse comments about how crazy this is, hoping that I'll just take it out. Then they realize that I'm serious, actually playtest it, and realize that we got the numbers completely wrong because there are so many moving pieces. Oops. 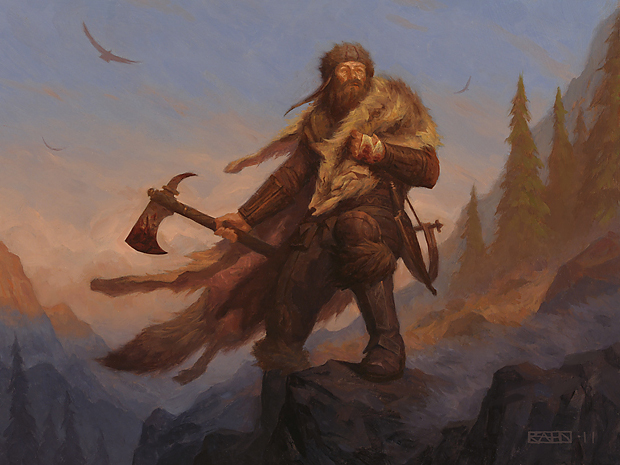 Ravager of the Fells would not have survived all that scrutiny, however, if I hadn't fallen in love with it. I adore pattern matching, poetic design, and occasional massive spikes of complexity, and this card pushed just about all of my buttons. It unfortunately pushed some playtesters' buttons as well—the numbers were a little better when it started, and by "a little" I mean "kind of a lot." It turns out that lots of little bits of value add up quickly, especially when you get more and more every time the thing transforms.

Unlike many other developers, I enjoy rules and templating, and this card earned me some serious conversations with the rules team as we went through several wordings for this mechanic. For example, does a "When CARDNAME transforms" trigger on the front face go off when it transforms into the front face or into the back face? In the end, I'm quite pleased with the final wording. The trigger on the front face of Ravager of the Fells is slightly less nice to read than I would have liked, but I'm fairly certain we could not have done better.

With Dark Ascension, I have also added a new entry to the Comprehensive Rules. I don't count the hexproof entry from Magic 2012 because that came from the set's lead designer Mark Globus. The "transforms into" rule, however, is all mine!

Despite the expanded possibilities, Dark Ascension's double faced cards remain rather sedate in the grand scheme of things. They are all permanents that have a default face and transform to the other face. One day, we might do double-faced cards again. We could do instants and sorceries. We could do spells that don't have a default side. Or ones that don't transform at all. But when we do, you'll know we're somewhere new—because we just did something new.

I hope you enjoy Huntmaster of the Fells and the rest of Dark Ascension as much as I enjoyed making both of them. The Prerelease is two weekends from now. I'll be going to one at Shane's Cards and Comics in Renton, but I won't have much time to stay. Sacrifice a Human or two for me in my absence, and I'm sure we'll run into each other again before too long.

Posted in Latest Developments on January 13, 2012