A Trip to the Library

Chaos previews are afoot, so to kick things off from my end, here's a rundown of the members of the development team:

Devin Low – Planar Chaos marked Devin's first stint as lead developer of a set—and he did such a bang-up job that he was given the lead on the next upcoming large set, codenamed "Peanut." Planar Chaos was no day in the park for development; not only was it designed by Bill Rose, the department Vice President and Devin's boss's boss's boss, but all the color pie shenanigans enacted in the set posed challenges that developers never had to deal with before — I distinctly remember Devin, after a long, grueling meeting about exactly where each ability would end up in PC's version of the pie, lamenting, "I hope I'm not overseeing the downfall of Magic." Granted, he was kidding (he's a kidder, that one), but that statement reflects the stress that Planar Chaos caused us. Did it work? Was it worth the trouble? Yes and yes. I'm sure you'll agree when you open your first packs next weekend that all the crazy shiftin' going on makes for great fun, and that the more things change, the more they actually stay the same. But enough about Devin...

Brian Schneider – Planar Chaos was Brian's penultimate set, and I'm certain that without his veteran leadership and no-nonsense style the set would have never worked out. Hope you're having a great time in Texas, buddy...

Mike Turian – I've known Mike longer than I've known anyone else that I work with — he's been a formidable opponent of mine for over a decade. Besides normal development stuff, Mike is responsible for our print layouts and dabbles in Market Research. He was on this team to prepare himself to be the lead of Future Sight development — another crazy set that posed another batch of challenges.

Henry Stern – Henry was the grizzled vet of the group. He's been working on Magic since before I ever played in my first Pro Tour, although recently he has been concentrating on some of our other projects. The feather in his cap is a board game of his design called Vegas Showdown, which won GAMES Magazine's Game of the Year last year.

Zvi Mowshowitz – Zvi, the well-known pro player and internet pundit, was our development intern for a few months. Zvi put in valuable work on both the Time Spiral and Planar Chaos sets while he was here.

The Time Spiral block is an odd duck in that each set plays to a theme that the other two do not. Time Spiral proper is about the past, Planar Chaos mainly focuses on alternate reality, and Future Sight is – well, let's not get into that now. Sure, the three sets have an overarching "nostalgia" theme, meaning they borrow heavily from Magic's past for most of their cards and mechanics, but the sets definitely ran the risk of feeling disjointed from one another because each executes on a theme so heavily. 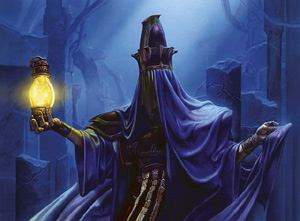 The development team (well, most of it... replace Zvi with Rosewater and you have the right group) were having a day-long offsite meeting at a deli in Seattle, looking for ways to spruce the set up. And just as nostalgia guided many decisions in Time Spiral, the team looked to the past for possible answers. One way they came up to link the set to Time Spiral was to build on a popular cycle from that first set.

The Magus cycle in Time Spiral was a late addition, making popular, powerful old artifacts into creatures with identical converted mana costs and abilities, and they were a big hit. So Planar Chaos decided to take a crack at another cycle of Magi that mimicked old powerful colorless cards, but this time their source material was not artifacts, but rather lands.

Because lands have no mana costs but creatures need to, mana costs and stats were assigned to the creatures to maximize how interesting they'd be to play. Some of the lands that were picked had links to specific colors already in place, but the colorless lands needed colors assigned to them.

When the team returned from their meeting and showed me what they'd come up with, I was most surprised by the green one. And guess what? It ended up seeing print almost exactly as designed. .

Look familiar? That text was taken straight from the so-called "tenth member" of the original Power 9, Library of Alexandria, a card so powerful that it is restricted in Vintage and banned in Legacy. Mana, card drawing, he does it all.

Wait... mana makes sense for green, sure... but what about drawing cards? In the crazy world of Planar Chaos, it makes perfect sense. Let's call it "growth" with the alternate reality filter applied. Mike Flores will have more to say on this next Thursday, so stay tuned.

How good is this little guy? Quite awesome. In fact, if it was up to me, we may not have printed it. Most of the powerful cards we make have their detractors; there's always one developer (and sometimes more) that is either afraid the card is unbalanced or doesn't like its impact on the environment. For Magus of the Library, that guy was me.

As you can see, the majority ruled and the card exists. Is it as good as I feared? We'll see, but don't be surprised if you lose a majority of the games when this guy comes down across the table on turn two.

And just think... this guy has four other friends!

You've all heard that we're bringing all three finalists from the Great Designer Search out here to work as interns. Well, we've added a fourth from the list of top finishers. Noah Weil, author of Limited Information here on our website, will be coming to R&D as a development intern next week. Noah showed great design potential, but he has also shown us great development skills in his card submissions, his writing, and in previous job interviews (he was the runner-up to Zvi for the Time Spiral development intern position). However, because Noah will be an employee now, he won't be able to compete in sanctioned events or, for Magic Online, ticketed events, which will make it progressively harder to write the column. Scott Johns and Kelly Digges assure me that they intend to keep Limited Information around if at all possible, so that means they'll need to find another columnist to replace Noah within the next month or two. I imagine you'll hear more on that as we find it out.