Posted in Latest Developments on August 20, 2010

There are many large-scale development questions that we ask ourselves from time to time. For example, we might ask how many creatures we want in average Limited decks, what range of strategies we want a color to have in Constructed, or what the right amount of niche draft strategies within a set is. One such question that we often ask is how important opening hands should be. 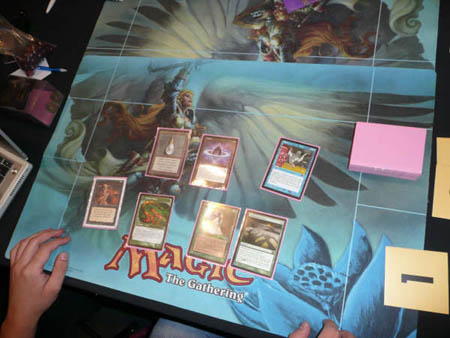 For an extreme, let's go back in time to the 2007 Magic Invitational. One of the final three matches between Tiago Chan and Rich Hoaen used the Vintage format. At the time, Flash was unrestricted, and Tiago had chosen to play a deck built around it. Rich's deck, on the other hand, was a Mishra's Workshop-based artifact deck. In the first game of their match, Tiago won the die roll, then plopped this hand onto the table.

Mox Sapphire and Lotus Petal. Cast Summoner's Pact for Protean Hulk. Cast Flash. Put Protean Hulk into play, then let it die. Search for three Virulent Slivers and a Heart Sliver, put them onto the battlefield, and attack for twelve poison counters. Bang, you're dead. Rich's deck didn't have Force of Will in it, so that was that.

This seems utterly lame, but even crazier things were possible at the same time. In the last round of Day One of Grand Prix–Columbus in 2007, I died to a Flash deck in my first upkeep. My opponent chose to draw, then used Gemstone Caverns, Elvish Spirit Guide, Flash, and Protean Hulk to plop four Disciple of the Vault, four Shifting Walls, and a Phyrexian Marauder into play. His five 0/0 artifacts died immediately, then I lost 20 life before I played my first land.

One of the most important things to Magic being fun over time is that players feel that skill matters. It's hard to feel that this is the case when games end on turn one with any degree of regularity. One.

There is an opposite extreme as well, although it's a little harder to see. I'll do my best to show it to you. The Draft Extravaganza, a day-long tournament that features drafts of several older formats, is a Seattle tradition. At the most recent one, I drafted this deck in a Ravnica-Guildpact-Dissension Draft:

2 Seal of Doom 2 Plumes of Peace

1 Soulsworn Jury 1 Guardian of the Guildpact

This deck may look like a pile to you. In fact, it looked like a pile to me while I was building it. However, I entered the draft with some knowledge about how the format plays. Almost every deck is three or more colors, which means plenty of time setting up and deploying cards like Azorius Chancery and Orzhov Signet to get the necessary mana to cast spells. Aggressive decks are rare because of how hard it is to come out quickly. This means that card-drawing cards like Compulsive Research and Consult the Necrosages are very powerful because most games come down to wars of attrition. 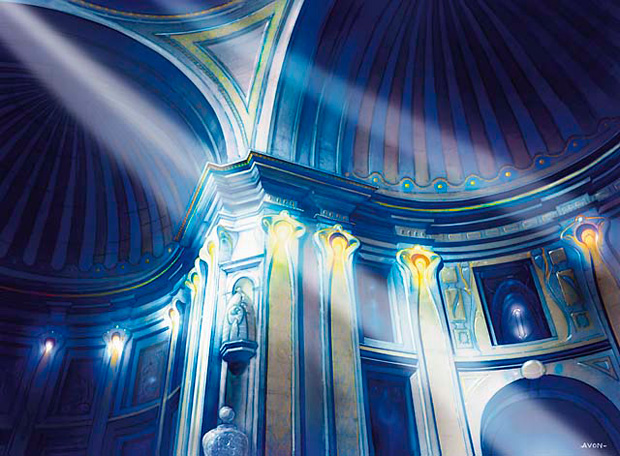 Unfortunately, I didn't have any of those. What I had was a single Train of Thought, two Dimir Infiltrators to find it with, and an Izzet Chronarch to use to get it back a for a second use. Those two uses of my one Train of Thought needed to be enough to power me into enough cards to actually put a game away ... with my single Ratcatcher. I had plenty of creature removal, so I guessed that I might have enough time to actually implement this crazy plan.

As it turned out, I did. I went 2-1 in this draft, and I would have won the third round if I had not misplayed. Every game, I looked at my opening hand, saw that it had lands and some kill spells, and trusted that my Train of Thought or one of its two surrogates would show up in time. My opponents usually figured out what was going on about halfway through the second game. Even if they had a good start, the format was so slow that their opening hand just didn't matter. A huge percentage of both my deck and my opponent's deck would be in on the table, and it didn't matter which seven cards started there. Paradoxically, this also reduces the amount of skill present in the play of the game as the importance of other factors rises. When almost all of the cards in a deck matter over the course of a twenty-turn game, deck building becomes a much bigger determinant of the winner than play.

I chose the most extreme examples I could think of for this section, and as you would expect most formats fall somewhere in between Summer 2007 Vintage and Ravnica Block Draft in speed. We try to vary the speed of formats in order to keep the experience of Magic varied, but we occasionally still get outside a comfortable range. Zendikar Limited is much faster than I think we intended it to be, and it can be so fast it's hard to come back from a bad opening hand. Worldwake was intended to slow the format down some to compensate, but one pack of Worldwake could only do so much. None of the other Limited formats we've released in recent memory have been uncomfortably fast or slow to me, so I can't be too unhappy about our record.

Unhappy with this article? If you are, then you can...

Posted in Latest Developments on August 20, 2010