n Monday while I was eating lunch, I tweeted this:

tomlapille It's feedback week on dailymtg.com. Tweet me questions about Magic development and/or working at Wizards and I will answer Friday.

After seeing a few questions, I added another tweet.

Game developer insight: I am more likely to answer a question you ask if I think it will be fun to do so.

Then, I started answering questions. 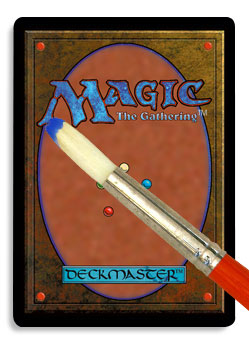 A common misconception of Magic developers is that all we do is balance the game so that it's fun to play. Of course, that's a very important part of our job. Magic is a premium brand because it is consistently fun to play, from the first experience all the way to the Pro Tour, and it is our efforts that make sure it continues to be so. We have gotten very good at making Magic sets fun to draft and fun to play with in Constructed.

However, like any creative professionals, we don't get to share our work with you if you don't buy it in the first place. Often, the hardest part of our job is to make a Magic set attractive to buy from the outside, so that you can get to the part inside where you can appreciate all the work we put into it. Magic has lots of fans that stick with us from set to set because they trust that they'll find lots of fun things to do in each of them, and we love that. Being artists, though, we still want to reach out and share our art with more and more people, and that is our biggest challenge.

An aside: you may be surprised to hear me talk about Magic developers as artists. We love games, we love making games, and we want the world to be a better place because of the games we make. If the purpose of art is to give something to the world, and the artist strives to create things that change other people, then we are artists.

jpmeyer @tomlapille in your experience as a developer, do you find yourself on average increasing or decreasing the casting cost of chairs?

I've only seen a chair re-costed once. I don't remember whether it was moved up or down, and I can't find its change history. 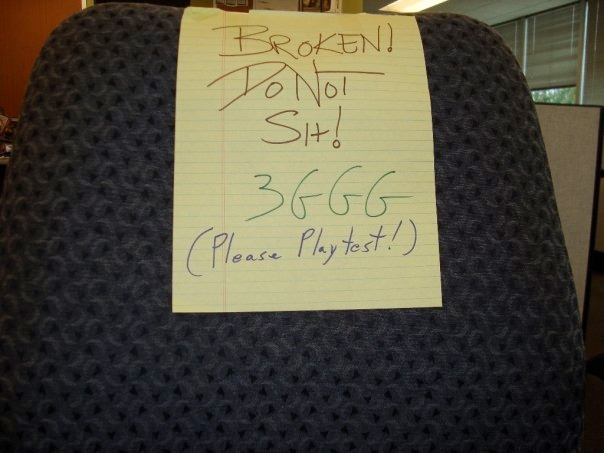 inkwell_looter @tomlapille How often are cards changed/fixed at the 11th hour and are there any amusing anecdotes about times that has happened?

The short answer to your first question is "too often." The long answer is that it happens about once per set, and it's usually lame when it does happen. When we don't have time to test a new card, we have to make it "safe"—that's usually code for "unexciting." When we don't, we get things like Umezawa's Jitte, on which the -1/-1 mode was added after playtesting, for the set was complete when the ability that previously lived there had rules problems.

Sometimes we get lucky, of course. My favorite eleventh-hour card I've seen during my time at Wizards is Hive Mind. We had super-wonky art, and an equally wonky card to match it that didn't quite work within the Magic rules. Mark Gottlieb designed the Hive Mind we eventually printed, but with so little time to test it we couldn't test it at a low mana cost. I think we were fortunate that six mana turned out to be the sweet spot where it could show up every once in a while with Future Sight's Pacts in Extended and Legacy.

montykins @tomlapille Where do you guys go to lunch? Is it all one group or do people split off into "the pizza group", "the Mexican group", etc.?

The biggest issue we face at lunch-time is that we all have tons of different dietary restrictions. I eat a vegan diet for health reasons whenever possible, so I stick to ethnic cuisines like Mexican, Thai, and Indian. I won't share the exact nature of others' restrictions, but in the end the only type of restaurant that everyone on the development team can eat at is Mongolian barbecue. This makes us pretty fragmented most of the time. My personal favorite spots to eat at in Renton are La Hacienda (Mexican) and Royal Orchid (Thai), and I don't normally have trouble putting together crews to go to either of those places.

sfogg25 @tomlapille What was the last common you were really attached to? Or do developers try to not get too into commons?

We try to give every card the attention it deserves. In some cases, that isn't much. There's not a lot to know about Maritime Guard, for example. However, we care about Limited players and we care about inexperienced Magic players, and for both of those groups the commons in a set define their experience. In many cases, the key to making sure that the experience is what you want is to stay unattached to things; if something needs to give to get the experience the way you want, you need to let it go.

On the other hand, sometimes it becomes clear that a particular common is the key to creating an experience, and you become attached to it. In my case, the most recent two cards I became attached to were The Lady of the Mountain and Evil Presence in the online-only set Masters Edition III. The Lady of the Mountain was one of ten simple, gold, legendary creatures at common in that set, and to me she was the flag-bearer for the rest of them. Evil Presence, on the other hand, was a pinpoint answer chosen specifically to address the most powerful Limited card in the set: Karakas. When 62 of the set's 205 cards are legendary creatures, Karakas is very powerful. Evil Presence is otherwise weak, but turns that same all-powerful Karakas into a lowly Swamp. It made me happy to find the one card in Legends that answered Karakas, and I defended it from people who considered it too insultingly bad to reprint.

RidiculousHat @tomlapille fyi when tweetdeck shows your fb post and your twitter post, i get to see a "before and after" of tom lapille without glasses!

This isn't a question.

baturkey @tomlapille Are you able to take off the developer hat when playing other games? Or do you even want to?

Sometimes. My experience is that a well-crafted game can hide the craft that went into it. If something in a game feels right, it is invisible. If it feels wrong, you notice. One of the hardest things to break people of when they enter Magic R&D is the idea that Magic cards are handed down from above and can never change. When every other Magic card someone has seen could not change and felt right already anyway, why would they think that something could be different? The change in mindset that allows us to see games as malleable takes some time to effect. 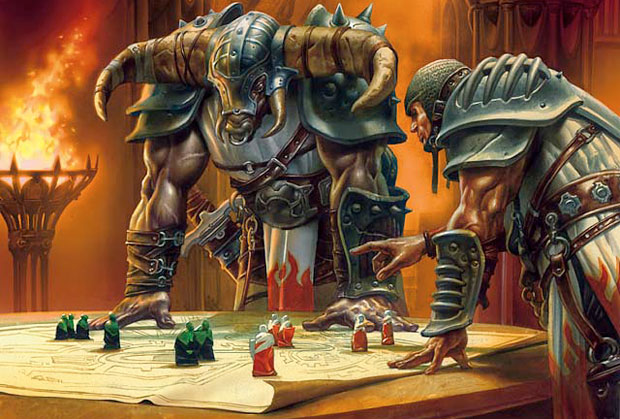 Because I have that mindset, I have a really hard time playing games that include things that feel wrong and that I would change. For example, I have a really hard time playing Guitar Hero 3. When you correctly hit certain series of notes, you get a certain amount of "star power." You can spend "star power" to double the points you get for every note you hit while your star power is activated. However, while you are using star power, you can't gain star power anymore. Rock Band, however, has the same mechanic, except with the change that you can still gain "overdrive" while you are already using overdrive. This is obviously better for game play, and every time Guitar Hero 3 punishes me for activating star power at the wrong time, I get angry.

However, there are also times when the game developer side of me increases my enjoyment of a game, and those times are more than worth the cost of having that mindset. For example, I recently interacted with a new roleplaying game product in which, through something like 350 pages of content, I was pleased countless times and annoyed only twice. That's a well-made book, and I look forward to telling its authors how much I like it this coming weekend at Gen Con. Even if the game developer mindset keeps me from enjoying certain games, it does ensure that the games I play are the good ones and that I can appreciate them properly.

dolphinnick13 @tomlapille are you writing your column from Gen Con? See you there on Thursday.

Nope. As I type this, I'm sitting in my apartment in scenic Renton, Washington. However, I will be in attendance at Gen Con, which I'm more than a little stoked about. It's the biggest game convention in the United States, and it's going on right now as you're reading this. I'll be in the Wizards booth during much of the time when the vendor hall is open, and if you look, you might find me playing other games while I'm off duty.

Thank you to all of you who took advantage of this opportunity to get questions answered. Although we may not always answer questions directly, we are always listening, and I encourage you to use any of the methods Mark Rosewater talked about earlier this week to get your feelings heard. Thanks for caring so much about the work we do.