Posted in Latest Developments on October 1, 2010

What things do you want to know about Scars of Mirrodin development?

... and you answered. Let's see what you wanted to know.

@tomlapille Was metalcraft, during its intial design, ever a fluctuating number?

Yes. As Mark Rosewater talked about in his second preview article for Scars of Mirrodin, the general shape of the mechanic was borrowed from a set that R&D producer Mark Globus was working on to practice his design skills. Mark Globus's mechanic counted permanents, but changing "permanents" to "artifacts" was a simple matter, and we were off to the races.

One way we could have done this was "metalcraft N", where the number of required artifacts changed from card to card. That would have given us more space, but it would also have been more confusing. It's been a while since we've done a variable threshold across cards with turned-on-or-off mechanics, and this is no exception. Both design and development experimented with numbers other than three, but three just felt right to both groups.

@tomlapille the relationship of Karn with Scars :D

This isn't a development call. Creative gets to decide what relationships characters will have with planes, and Design gets to choose how to implement said relationships on the cards. We play an advisory role in the process, but it's very rare that we decide to outright veto anything.

@tomlapille Will be there be a mass artifact nuke? Any way to cleanse some poison counters off?

Scars of Mirrodin is quite obviously an artifact set, and it kicks off an entire artifact block. I'd be surprised if we went the whole way through it without a mass artifact destruction spell of some kind. That's the sort of effect that Standard will want to have in it for the long term, or else there wouldn't be a stopgap measure for some kind of crazy artifact rush deck that got out of hand. We didn't put it in Scars of Mirrodin because we thought it would be better to give everyone some time to run amok with artifacts before giving out the nuclear codes.

With regard to poison counters, Mark Rosewater designed the block structure, and it was very important to him that poison cannot be undone. We respected his wishes. If you're looking to get rid of poison counters, perhaps you should invest in some Leeches. 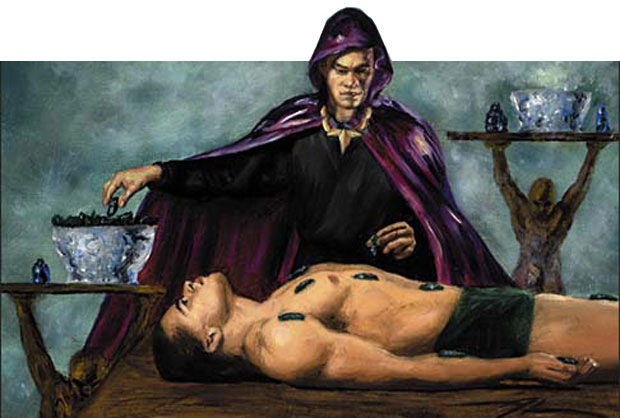 Here's an old spellbomb and a new spellbomb.

Design identified two issues with the old spellbombs. One was that you had to choose between drawing a card and using their effect, which is a source of tension in game play. Do I want a random card, or do I want to deal 2 damage to something? They're a little simpler to play with if you just get to do both. Developers like the hard parts of Magic to be attacking and blocking and casting spells, not making fiddly decisions about marginal effects on a permanent, so that appealed to us. The other issue is that the fun part of the card is the effect, which originally was locked away from you if you weren't playing the right color. Why not give everyone access to the effects, Design wondered, and use the less sexy card draw as the reward for being on color? That's what they tried, and it stuck.

We asked Design to put them in the set. They were fun, so we kept them. That's all there was to that.

@tomlapille how did you make Limited so rad

There are two answers to this question. One answer is that there were some really fantastic people working on the set. Mike Turian was the development lead, and Matt Place, Erik Lauer, and Aaron Forsythe were also on the team. That's a lot of Pro Tour experience in one place, and in particular Mike Turian is thought to be one of the best Limited players the world has ever seen. When people of that caliber work together they know what they want, they know how to get it, and things turn out well. (This is not to diminish Mark Purvis, the last member of the team, but his contributions happened along different axes.)

The other answer is that we played a lot of it. The best way to find out whether something is fun or not, and what must be done to make it more fun, is to just do it again and again. That's our time-honored method for making Magic. Play the set, make changes, play it more, make more changes, keep playing it. We just repeat that until we run out of changes to make, and at that point it's usually pretty awesome.

@tomlapille where did the name Skithiryx come from? Was it just someone's child banging on the keyboard?

Names and flavor text come entirely from the Creative team, not us. Every nonstandard vowel and consonant in that name was considered carefully. As it turns out, Phyrexians like bizarre spellings and hard consosants like k's and x's. Are you more intimidated by the thought of the dread reign of Firecsia or Phyrexia? I know which one I'm scared of.

@tomlapille Re: Draft—What special challenges go into an entire block designed to trick people into playing more targets for my Shatters? 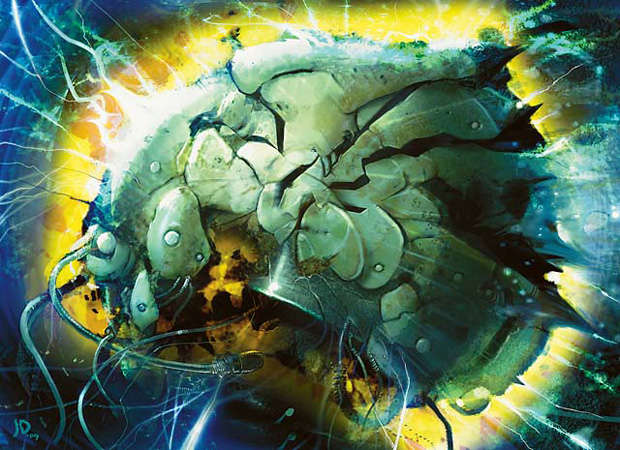 All we had to do was put tons of artifacts in. It wasn't hard. Enjoy your Shattering!

@tomlapille Any cards keeping you up at night (because they might be too good)?

I wouldn't say that there are any cards keeping me up at night, but there are cards I have concerns about. Any correctly developed set should have a few cards like that, or else it means that we're being too safe. In the case of Scars, the most obvious card that scares developers is Mox Opal. The two things that most often cause Constructed formats to do strange things are fast mana and explosive card drawing. The original cycle of Moxen are some of the very best fast mana we've ever made, and this card isn't that far from them. We played with Mox Opal quite a lot, and the legendary supertype seems to make the card fair, but the card still is what it is.

Did anyone try to make a case for artifact lands? :p

Nope. In my opinion, artifact lands were very cool for Mirrodin Limited, but they had ruinous effects on Constructed that have been documented elsewhere. With Scars, artifact lands in Constructed would have made metalcraft much harder to turn off with removal, which we were pretty sure wasn't worth the risk.

Near the end of Scars of Mirrodin development, there was concern that Sealed deck building was too difficult because of how many artifacts there were in the set. In most sets, you can just pick two colors and go, and that eliminates most of your cards. That is not true here. To address that concern, we took five artifacts that were completely colorless and gave them colored activations. Four of the changes were fairly clean: Soliton, Wall of Tanglecord, Saberclaw Golem, and Vector Asp all lended themselves just fine to the changes. The white one was tougher, and there was some contention about which card would get a white activation. The final choice went to Mike Turian, and he chose the Idol.

Was the idea of making common/uncommon equipment on a power level similar to Mirrodin considered, given the common artifact removal?

It was considered, but rejected. I consider the power level of Mirrodin's common and uncommon Equipment to be a mistake born of unfamiliarity with a new kind of card. Loxodon Warhammer, for example, is hands down the most powerful card in Tenth Edition Limited, and it was only uncommon in Mirrodin. Trusty Machete is one of the three most powerful uncommons in Zendikar Limited, and Bonesplitter, which is even stronger than that, is common in Mirrodin. Equipment is just much more powerful than the development of Mirrodin seems to have given it credit for.

Equipment also has some unfortunate consequences for game play. We like it when the parts of your cards that make them different from one another matter during games. Powerful Equipment can suppress that. When you have a Sword of Body and Mind, for example, it doesn't much matter what you put it on; whatever creature carries it will be a significant threat. That's something that should happen more often in an artifact set than elsewhere, but it still shouldn't happen as often as it did in the first Mirrodin. Dave, your observation about this is keen; Darksteel Axe and Sword of Body and Mind both are shifted up one rarity from their Mirrodin equivalents, and that's because we've changed our minds about how often those things should happen.

Who was your favorite developer on the set?

I think I'll go with the set's lead developer, Mike Turian. He's likely one of the top ten Limited Magic players of all time, and I learned a ton about making Limited formats from him while we developed the set. He's also very handsome.

That was good? You think he'll like it? Wait, this is still on? Oh go-STATIC 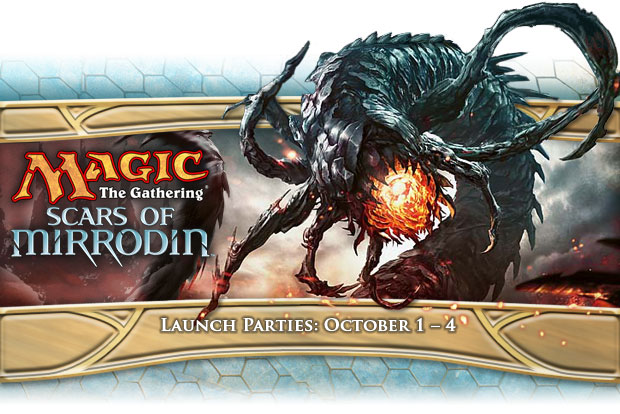 Posted in Latest Developments on October 1, 2010