Posted in Latest Developments on October 23, 2009

s Mark Rosewater mentioned on Monday, I was part of the Zendikar Vampire team, which designed many of Zendikar's Vampires and was responsible for the overall feel of the Vampires as a tribe. However, the Vampires also changed a lot in development. During that time, the Zendikar development team turned them from a pile of mechanics into a coherent group of cards that was fun to play. 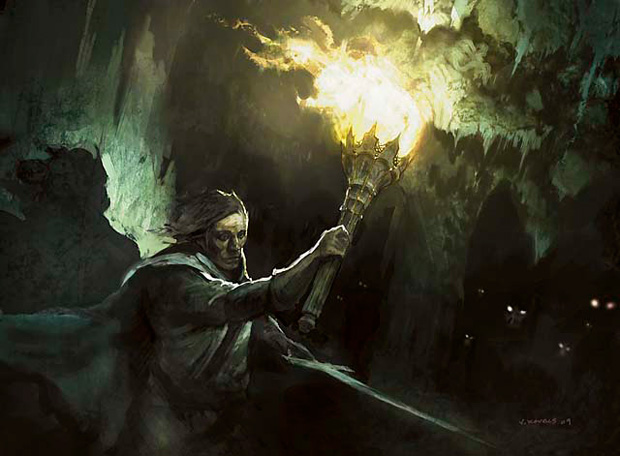 Making Vampires into a tribe of small creatures was a design decision, and that decision meant that a Vampire deck with Zendikar cards was going to be a deck full of little black creatures. In order for this not to be disappointing, we needed to provide Vampire decks with all of the things that it takes to make a black aggressive deck work. Erik Lauer, Matt Place, Mike Turian, and I all spent years playing competitive Magic tournaments in the real world, which honed our instincts for what makes Constructed decks strong.

We used those instincts to provide Vampires with what they needed to be a reasonable deck. Our goal was not to be prescriptive; it is not our job to decide exactly what a Vampire deck should look like. However, it was our job to make sure that the tools to build Vampire decks are available. The following Vampire cards changed in development to help accomplish this goal.

Vampire Lacerator was one of the first cards that the Zendikar development team added as part of the initiative to improve Vampires in Constructed. Aggressive Constructed decks simply don't work without strong one-mana creatures. The only one-mana Vampire in Zendikar before this card was Guul Draz Vampire, a card that we liked but believed would not be strong enough for a competitive Standard Vampire deck. That left Vampires without a strong one-drop.

It has been many years since Standard had a mono-black hyper-aggressive deck that was strong. However, Erik, Matt, Mike, and I have all been playing long enough to remember the aggressive mono-black decks that were played while Tempest block was in Standard. Between Sarcomancy and Carnophage, those decks had eight one-mana 2/2 creatures. Even without Dark Ritual, a card that we no longer feel comfortable printing, those decks were putting serious pressure on anyone starting on turn one, and could kill people by turn four or five. That was exactly the sort of speed that the Vampires would need to be competitive.

The actual design for Vampire Lacerator came from Aaron Forsythe. He and the development team spent part of a meeting talking about what it takes to make mono-black creature decks work. Reminiscing about Carnophage and Sarcomancy while staring at Vampire cards with the ten or less life theme caused the card to spring fully formed into Aaron's mind. The development team added it to the set, and the rest of us in the Future Future League began beating each other up with a brand new one-mana 2/2.

I already told the story of Bloodghast in Making Landfall, Part I, but here's the short version. The card started as a 1/1 with haste that was allowed to block. This made it quite strong in control decks, which used it to block opposing creatures over and over again. Playtesters' frustration with this contributed to it losing the ability to block. To compensate for this, the development team made Bloodghast's haste situational and added an extra power.

This sort of feedback about frustrating game states often comes from playtesters in the Future Future League. However, the development team often has concerns that are different from the playtesters. In this case, the team's concern was that Bloodghast was one of Zendikar's Vampires, but it wasn't helping the Vampire deck do what they wanted it to do. Vampire decks were playing it because of its resilience, but it was stronger against the Vampire deck than it was inside it.

In this case, one solution solved the problems that both the playtesters and the development team had. Taking away Bloodghast's ability to block removed the playtesters' concerns; making the card stronger in attacking decks and tying it in to Vampires' "10 life or less" theme made the development team happier. Life inside Magic R&D is much simpler when clean solutions like this exist.

Vampire Hexmage is a bit of a weird card. Originally, it was a

3/3 that removed all counters from a target permanent when it entered the battlefield. A change inspired by the set's mana curve early in development changed it from a wonky niche card to a potential Constructed card.

HS 9/10 too many 4B 3/3's at uncommon, recosted to BB 2/2. (this might be an insane sideboard card vs Planeswalkers)
HS 10/20 just so everyone is clear, this guy destroys planeswalkers. (among other things)

Indeed, and taking out planeswalkers was exactly the job that we meant Vampire Hexmage to do. There was some amount of debate about whether a card should do that at all, but developers like answers. In fact, former Building on a Budget author and R&D member Nate Heiss wanted to make it even more explicit that he can take down a planeswalker.

NH 11/19: Is there any way to make it more clear that this guy kills planeswalkers?
Del 11/24: A planeswalker without loyalty counters as state-based effects are checked is put into its owner's graveyard. You don't want to try to say that in reminder text.

A problem that we discovered with this card, however, is that although you want to kill a planeswalker with it, doing so requires that you hold your two mana creature in your hand long past turn two. This wasn't any fun!

AF 1/26: Now has first strike and sacs to use. Not sure this is the best place for first strike.

First strike creatures with sacrifice abilities still feel strange to many of us in Magic R&D, but the development team felt that some extra ability was necessary for the card to be strong enough in Constructed. First strike allows this card to deal damage and use its ability in the same combat step, so the team went with it.

The funniest thing in this multiverse record to me is this comment from a little over a year ago, which suggests that flavor guru Doug Beyer might be a deckbuilding force to be reckoned with on the Pro Tour if he were not busy creating Magic flavor instead.

As the recent Pro Tour–Austin showed, Doug was correct.

By this point, we were moving steadily toward having all the pieces in place for Vampires to be powerful. However, once people's Future Future League Vampire decks started being a threat, other playtesters began to pack the Vampire hate, with cards like Great Sable Stag and Devout Lightcaster. These vexed the Vampire deck for obvious reasons. We like Magic to have answers to problems, but we also like answers to those answers, and the Vampires didn't have an answer to the answer.

One classic effect that black uses to get around protection abilities is the "Edict" ability, which forces an opponent to sacrifice a creature. If the opponent has no creatures other than Great Sable Stag, then they are forced to sacrifice that Stag, protection or no. This didn't work consistently against green decks that used creatures like Noble Hierarch and Birds of Paradise to accelerate out their Great Sable Stags, but it worked beautifully against creature-light decks that sideboarded in the Stag.

Gatekeeper of Malakir doesn't always solve the problems that Vampires run into, but it goes quite a long way. Of course, it's also just a strong card on its own in a mono-black deck. We were pleased with what it did, and left it for a long time as a

2/2 that caused the sacrifice when it entered the battlefield. Later on, when the development team was unhappy with the number of kicker cards that we thought had a chance in Constructed, they chose to make this a

to get the sacrifice effect. This made the card a little stronger against creatureless opponents.

After all this, we found ourselves revisiting a Magic 2010 card.

Many tribal decks are famously strong because of their "lords," cards like Goblin Warchief, Lord of Atlantis, and Wizened Cenn. Vampire Nocturnus, the Magic 2010 Vampire lord, was a card that we all thought was fun, but that we weren't sure was a Constructed contender when it was a

4/4. Magic 2010 lead developer Erik Lauer proposed new numbers for it, and we tested it at those numbers and liked how it played.

I decided to take a Vampire deck to the Zendikar Prerelease I attended in Phoenix Arizona. To make that deck, I used a process I've discovered that creates fun tribal decks for gunslinging. I take four of each of the best cheap creatures of that tribe, add one of every other card that references the tribe, then fill up to 60 cards with single copies of other cards that help the deck. I do this because it's more fun to play a deck for long periods of time if it has lots of variety.

Here's what I took with me to Phoenix:


I had a ton of fun playing this deck in Phoenix and watching all of our Vampires doing their thing in the real world. My Vampire Lacerators often attacked on turn two, and my Bloodghasts frequently hopped out of the graveyard ready to attack. One Gatekeeper of Malakir even got the chance to eat a Great Sable Stag! Somehow I never got to take any planeswalkers out with Vampire Hexmage, but I did win a game because I used one to remove all of the counters from a Djinn of Wishes. I'll call that a moral victory.

I had lots of fun playing with Vampires during Zendikar development, and I had fun playing them in the real world at the Zendikar Prerelease. If the Vampires in Zendikar strike your fancy, I encourage you to get out there and build a deck with them. I don't think you'll be disappointed.

Last week's article was experimental, and I can see it didn't work as well as I hoped it would. Thanks for the feedback, though!

Posted in Latest Developments on October 23, 2009