Before we begin, you should all know that you're lucky to have me as an instructor. As it turns out, I and a select few of my henchmen literally wrote the rules for being an archenemy. That makes me one of the most experienced archenemies in the world, so I'm the perfect person to prepare you for your coming debut at tonight's Release Events. Pay attention now, and you might have some glimmer of hope when some meddling band of heroes shows up at your doorstep tonight.

Ah, I see. Some of you are smiling. You think you're already prepared to crush the forces of good that will no doubt try to stop you as soon as you go public. I bet some of you think you'll even outshine me as an archenemy one day.
Yeah. Good luck with that.

Anyway, whether or not you're ready to unleash your evil schemes on the world, you're here because you think I may yet have something to teach you. You've paid handsomely for my expertise, so let's get down to business.

If by some foolishness you haven't already learned how your newly villainous life is going to work, I'll remind you. Your opponents each start with 20 life, but they take simultaneous turns just like in Two-Headed Giant. You'll start at 40 life, you'll take the first turn of the game, and you'll even draw a card on that turn. When you attack with a creature, you'll choose which of the pathetic self-styled heroes who oppose you it attacks, and only the player it attacks can block it. You win by killing all of your opponents. They all win if any one of them is still alive when you lose.

You might think that this could be an unfair deal, as you'll be alone against two or more opponents. You'd be right. That's what your schemes are for. You'll have a twenty-card deck of scheme cards, containing a maximum of two of any given scheme. At the beginning of each of your first main phases, you'll set the top card of your scheme deck into motion by flipping it face up and doing what it says. For the majority of the schemes, you'll just do what the scheme says, then you'll put it on the bottom of your scheme deck. 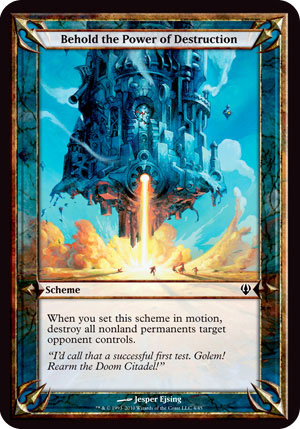 Other schemes are ongoing schemes, which remain face up until your opponents force you to abandon them. When you do that, they go on the bottom of your scheme deck too. 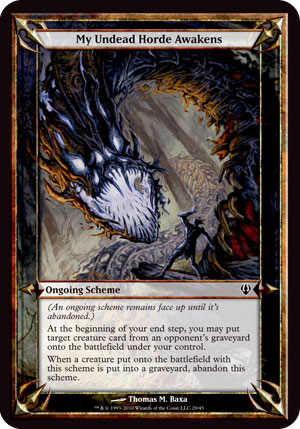 With the help of your scheme deck, you'll have no trouble fending off any number of opposing heroes!

On second thought, that may be an overstatement. I certainly wouldn't have any trouble, but I don't know about you lot. You look a little green, a little fresh-faced. We just can't know what you'll do the first time three opponents attack you with five different creatures for double digit damage, and you've got to figure out how to stop them from killing you. You might panic and die. You might keep yourself together and stop them. We won't know until it happens. At least when we're done today you'll have some clue about what to do when it does.
Like I said before, you're lucky you've got me.

Now then, let's get on with it. I'll give you my three biggest tricks to being a good archenemy, then talk some about the decks that come in each of the Archenemy Game Packs.

This is a bit of a strange statement. Of course you're supposed to kill players, you say; that's what you have to do to win. I'm saying something a little different, and that is that your priority should be to eliminate players whenever you can. No matter how many opponents you have, it would be less dangerous to have one fewer opponent. Don't spread out your attacks to be fair, like you might in a multiplayer format in which politics mattered. Your opponents are all going after you anyway, so you should concentrate your attacks on them one by one, only leaving someone alone once they're all the way dead. Often, the turning point of a game of Archenemy is the moment when the first player on the team of heroes dies. You need to go out of your way to make that happen. 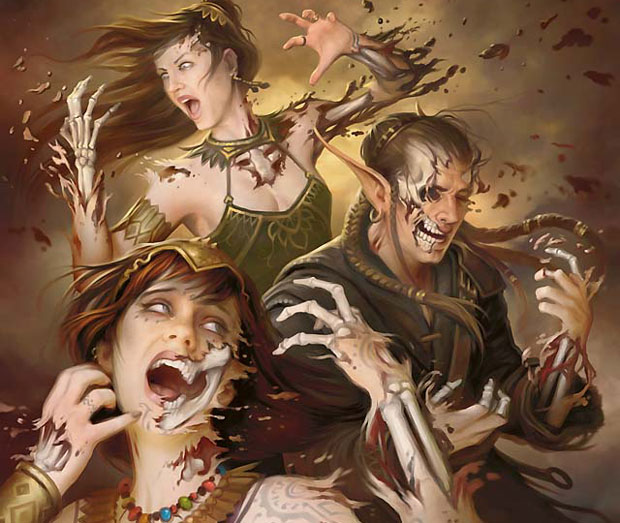 Keep in mind that when a player dies, all cards owned by them leave the game with the player. One of the very best ways to deal with a pile of creatures that is about to kill you is to kill its controller first. This is also useful for thwarting your opponent's efforts of teamwork. Smart opponents will do things like Armadillo Cloak each other's creatures. One way to get rid of that hypothetical Armadillo Cloak is to kill its hypothetical controller; when you do that, the Cloak just evaporates.

One of the most powerful things you can do as the archenemy is have tons of mana. In normal Magic, if you want to draw extra cards, you have to pay mana to play a spell from your hand. That's not true in Archenemy, as there are plenty of schemes like this one. 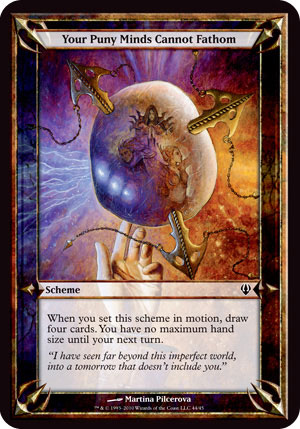 This isn't the only scheme that explicitly gives you more cards in your hand. There are also plenty of schemes that don't draw you cards, but put you up plenty of resources on your opponents anyway, which is nearly as good as drawing you cards. Here's one of them. 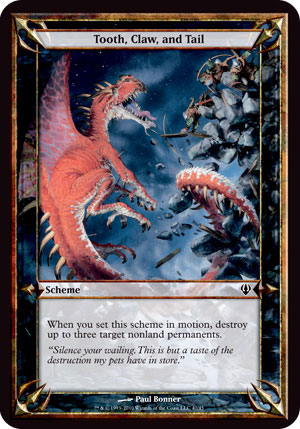 Finally, there are schemes that allow you to pay mana for things, which will reward you having lots of mana. Here's a nice one. 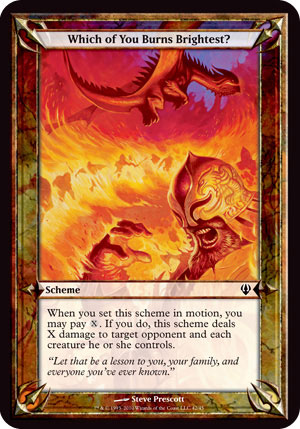 Don't be afraid to mana flood. Every time you do, you will be eventually rewarded by your scheme deck.

The most terrifying thing for you as an archenemy is a team of opponents that is working together seamlessly. Magic cards combine in endlessly complex ways with each other, and a team that is willing to put all their cards together in powerful ways is scary. Anything it takes to get them disagreeing with each other and stepping on each other's toes is a great idea. Lucky for you, there are schemes for doing that too. 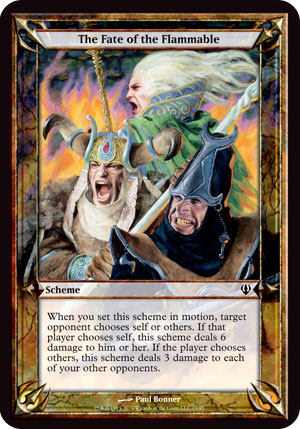 There are several of these schemes, and you'll get the most out of them by targeting the most selfish players with them. You should always be watching your opponents like a hawk, and if you do you'll know exactly which one of them won't be willing to take a hit for the team. Hit that person with these schemes, and they're sure to choose others even if they aren't supposed to.

Now, some advice about each of the decks you might get this weekend.

This deck is built around artifacts, and unsurprisingly several of those artifacts make mana for you. This deck gives you the opportunity to make tons of mana to leverage your schemes with, and you should play your mana accelerating artifacts as early as possible. This will help you with using your schemes, and it will also help you get the most out of the expensive bombs like Memnarch and Sundering Titan. Those are the cards that you'll need to put games away, so make sure to use things like Lightning Greaves and Synod Sanctum to protect them. Of course, you could just pop Sundering Titan in and out of the battlefield with Synod Sanctum and leave your opponents unable to cast spells ...

Bring About the Undead Apocalypse

This is at its core a reanimator deck. You have big creatures, ways to put them in your graveyard, and ways to get them back. This style of deck can be a little inconsistent in normal Magic, but here your scheme deck will help you out a ton. It's full of things that make your opponents discard and things that reanimate dead things. Make sure to pave the way for your schemes to do their work by making your opponents discard things early in the game. Several of your schemes will pop out of nowhere looking for cards in your opponents' graveyards, so do your best to give them something to find.

Scorch the World with Dragonfire

Do you like dragons? This is the deck for you. It's full of enormous and powerful creatures ready to take huge chunks out of your opponent. The key while playing this deck is to not get so far behind before your dragons come out that you can't catch up. The removal spells in this deck include cards like Breath of Darigaaz and Branching Bolt that can take out multiple creatures if managed carefully, and you'll be in the best position for your dragons to win the game if you use them well.

This is a green deck full of big monsters and mana acceleration. Just like the artifact deck, you'll get the most out of this one by ramping your mana as much as possible and letting your schemes and big creatures do their work. The most dangerous thing you can do with this deck, however, is put your eggs in too few baskets. There are several cards like Armadillo Cloak and Forgotten Ancient that can leave you weak to one or two removal spells. Use your Forgotten Ancient to spread counters around liberally, and don't automatically Armadillo Cloak your best creature each time. The heroes can usually dig up one or two kill spells; make it hard for them to devastate you with them.

We're almost out of time. I hope this has been worthwhile for you, but we won't really know if it was until tonight. The Archenemy Release Events tonight and tomorrow will be swarming with meddling do-gooders who want to wipe the earth of people like us, and put a stop to our glorious schemes. If I did my job well today, you won't let them.

Go forth and conquer.