A Walk Through the Cold

Posted in Latest Developments on July 7, 2006

Coldsnap prerelease is essentially upon us all! Hopefully at this point, playing the cards is quickly becoming a priority for all of you as opposed to just reading about them, so I'll try to split the difference by writing about stuff that will help you play the cards this weekend!

Here, then, is my very own condensed, annotated Coldsnap FAQ, complete with last-minute preview card…

Snow and the Snow Mana Symbol 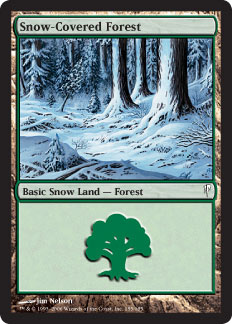 The snow-covered supertype has been renamed "snow." All _Ice Age_ and _Alliances_ cards that used the term snow-covered are receiving updated wordings in Oracle.

Snow-covered land was one of the bizarre new things that debuted in Ice Age and never realized its full potential. We aimed to rectify that by having snow matter in a whole slew of new ways, including letting other kinds of permanents besides lands be “snowy.” Of course, our creative team blanched at the idea of having things be labeled “Snow-covered creatures” (“Why don't they just shake the snow off themselves?” they asked.), so we changed the supertype to the much shorter—and much more vague—“snow.” So there are snow lands, snow creatures, snow artifacts, and snow enchantments in Coldsnap, including reprints of the original five Snow-covered lands.

* Like "legendary," the supertype snow may appear on any card that becomes a permanent. Unlike "legendary," "snow" has no particular meaning or rules associated with it.

* Some lands with the supertype snow, such as Snow-Covered Forest, also have the supertype basic. Since these are basic lands, you may have any number of them in a Constructed deck in any format in which the _Coldsnap_ set is legal.

* In Limited events, you can't add basic snow lands to your deck from outside your card pool. You may add only lands named Plains, Island, Swamp, Mountain, and Forest, as normal. 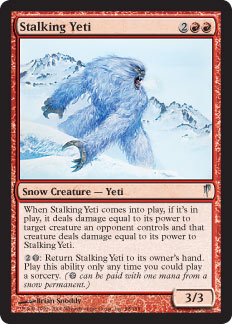 The _Coldsnap_ set features a new mana symbol. The snow mana symbol is denoted as {S} and resembles a snowflake. It is used only in abilities, not in cards' mana costs.

* {S} in a cost represents a single generic mana, similar to the symbol {1} in a cost. It can be paid with one mana of any color, or one colorless mana, as long as that mana was produced by a snow permanent.

There are several snow permanents other than lands that are capable of producing mana—something to keep an eye out for this weekend.

The snow mana symbol is my pick for the coolest new thing in the set. It functions in some ways like a color without actually messing up your mana, and allows us to put weird “snowy” abilities on creatures that might not otherwise get those abilities “in-color.”

Cumulative upkeep is a mechanic featured in the _Ice Age_ and _Mirage_(TM) blocks.

Cumulative upkeep was another Ice Age mechanic that we felt could be expanded upon. 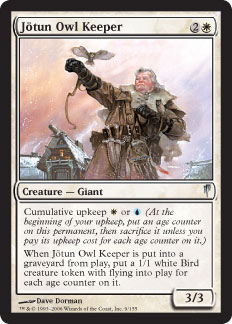 The important thing to know about cumulative upkeep is the order in which you handle paying—or not paying. Let's look at the Owl Keeper, for instance. You play him on turn 3, and then pay his upkeep for the next five turns before running out of mana. What happens on the sixth turn?

His cumulative upkeep ability triggers at the beginning of your upkeep. The first thing you do when it resolves is add another age counter, taking the total up to six. Then you decide if you are going to pay or not. In this example you can't pay, so the Owl Keeper is put into your graveyard and you get six bird tokens… even though you only paid his upkeep for five turns!

* Note that the decision to track cumulative upkeep using counters was made when the "Sixth Edition rules" (and the original version of the Oracle card database) were released in 1999. The _Coldsnap_ set is the first since that time to feature cumulative upkeep cards, so this may appear to some players to be a rules change.

I'll admit that I was one of the people pushing to bring back “slowtrips” as a way to recapture the old school feel of the set. Was it necessary mechanically? Not at all. But it helps capture a feeling of the past in a way that “normal” cantrips could not.

Recover is a triggered ability that works from the graveyard.

The official rules for the recover ability are as follows: 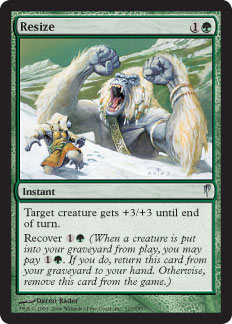 Ripple is not a mechanic we have touched upon here at magicthegathering.com… yet. The ripple mechanic rewards you for having lots of copies of the same card in your deck—something that shouldn't be uncommon in the all-Coldsnap Limited format. And just about every ripple card is common… Gotta collect ‘em all! 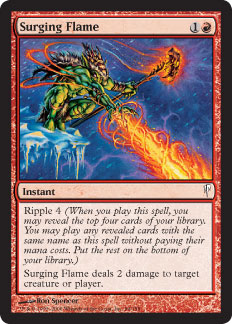 Previewed in InQuest magazineRipple is a triggered ability of a spell that works when you play that spell.

The official rules for the ripple ability are as follows:

502.56b If a spell has multiple instances of ripple, each triggers separately.

* When you play a spell with ripple, the ripple ability will resolve before the spell does.

* If you choose to reveal cards, you may play any or all of the revealed cards with the same name as the spell. Any cards you don't play, including those with the same name, will be put on the bottom of your library in any order.

* For each revealed card you choose to play, follow all the normal steps for playing it, though you won't have to pay its mana cost. Any additional costs are paid as normal. All cards played this way go on the stack on top of the original spell, then all abilities that trigger when you play the new spells (including their ripple abilities) go on the stack on top of them.

A cycle of _Coldsnap_ cards let you remove two cards of a specific color in your hand from the game rather than pay their mana costs. 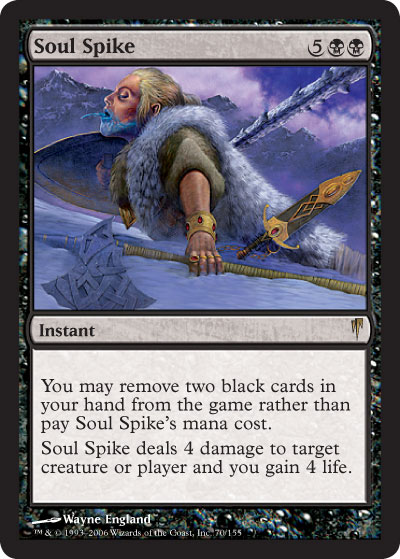 The design team wanted to make a cycle of pitch spells as an homage to the groundbreaking popular Alliances cycle (including the renowned Force of Will), but we were beaten to the punch by Mercadian Masques (Cave-In, Unmask, etc.) and Betrayers of Kamigawa (the Shoal cycle). We needed a new angle, and the answer was simply that “bigger is better.” Instead of removing one card of a color from your hand to play the spell, you have to remove two.

Soul Spike has some similarities to the powerhouse Visions spell Fireblast in that you have to be wary of a tapped-out opponent's ability to deal four or even eight damage at the drop of a hat. Of course, sacrificing two Mountains from in play is a much easier cost to pay in the late game than ditching two black cards from your hand, but I'm sure most of you are capable of building black decks that draw extra cards.

The life swing that happens when an instant-speed Drain for four takes out a key attacker can derail even the fastest aggressive deck's entire game plan, which makes Soul Spike a much more reasonable early play than Fireblast. After all, the early game is when cards in hand are easier to come by and decisions on what to throw away are easier to make.

Be wary of the black mage—your life total is no longer safe!

* You may pay the alternative cost rather than the card's mana cost. Any additional costs are paid as normal.

* Paying the alternative cost doesn't change when you can play the spell. A creature spell you play this way, for example, can still only be played during your main phase while the stack is empty.

* If you don't have two cards of the right color in your hand, you can't choose to play the spell using the alternative cost.

* You can't remove a card from your hand to pay for itself. At the time you would pay costs, that card is on the stack, not in your hand.

That's it for my quick walk-through of mechanics—make sure you're familiar with this material, then get out to your local Prerelease and kick some icy butt!

I wasn't sure what to expect with these results, although I'll admit to being curious as to whether people that opened only a small number of the lands in packs tended to keep them or trade them away.

Posted in Latest Developments on July 7, 2006