o let's say you decide one day you want to make a two-mana Planeswalker in Avacyn Restored.

How would you go about doing that?

Well. Taking a look at the block, Innistrad has a black Planeswalker and a green Planeswalker who is kind of maybe sometimes black when the moon hits him just the right way. Dark Ascension has a white-black Planeswalker whose play pattern drifts heavily toward the "white" end of the spectrum. That means you probably want to make this new 'walker in blue or red. Both options seem pretty reasonable, so which one do you choose?

You probably want your Planeswalker to have at least some kind of impact on Standard. Taking a look at blue first, however, you have a whole lot of competition in your two-slot from some of these bad boys: 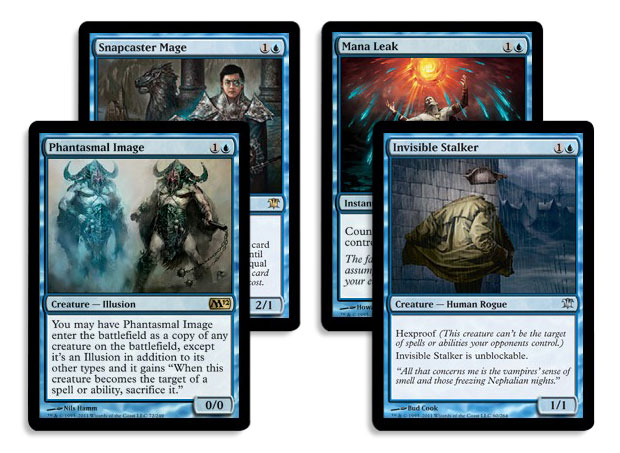 The marginal return on your fifth potentially format-defining two-drop is obviously very low, so you decide to turn to red, which isn't doing quite as much on the Standard landscape at two mana.

You're hardly out of the clear, though, because there's a two-mana card that's been a staple of red decks for most of Magic's history that happens to be Standard-legal at the same time your Planeswalker is going to be released:

That's right: the good ol' "Deal 3 damage with marginal upside." Bread and butter. Mortar to hold bricks. Nothing remotely special. Thing is, though, one of the reasons Magic has held up for almost twenty years is that we try to hold the power level of Standard-legal cards relatively constant. Sometimes we fail at doing that, but the point is that once you have a card at a particular mana cost that you know is going to get played, you don't really have a lot of room to get much more powerful than that and still have a card be printable. So your two-mana red Planeswalker is going to have to be about as good as an Incinerate.

Turns out that it really is. The problem is that you're constrained along two axes: complexity and, for lack of a better word, "epic-ness."

The complexity challenge is simply that the more options a given card presents, the more difficult it is to target it exactly to a certain power level. A

2/1 is always going to behave as a

2/1, and it's relatively easy to appreciate how that's going to work under different environmental constraints. But what about a

: Tap target creature?" Or a

1/1 that dies into a 1/1 Spirit? These are all around a similar power level, but the latter two are much harder to evaluate and depend far more upon the specific metagame inside which they are introduced. You can imagine, then, that the problem compounds itself further when instead of one ability and one set of power and toughness, you have to balance three abilities with three loyalty costs and a starting loyalty whose optimal floor and ceiling has no precedent. It becomes more and more difficult to hit the bulls-eye, as it were. 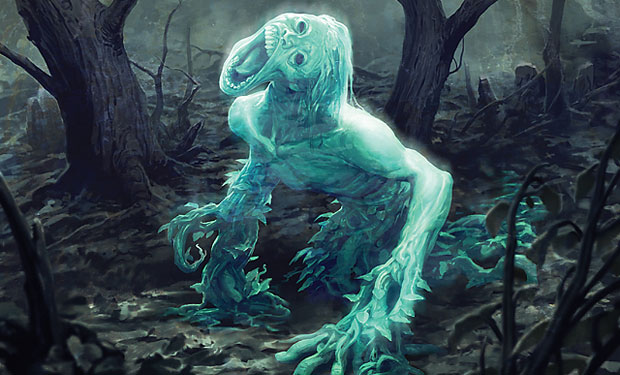 The problem of "epic-ness" is less easy to define. Essentially, most of the time in Magic your two-mana spells are pretty unremarkable. They work along the margins and tend to massage the consistency of your deck a little bit. It's wholly possible they're among the best cards in your deck—think Remand, Wall of Roots, Strangleroot Geist, or Fire // Ice—but it's frequently hard to appreciate the extent to which they contribute to your winning the game. In fact, when two-mana spells obviously define formats—think Rofellos, Stoneforge Mystic, Dark Confidant, or Bitterblossom—they tend to be overpowered. So the power-level target you want to hit for a successful two-mana card fills, in essence, a similar role to that of a first-pick common in a Booster Draft. The adjective I'd use to describe both is "solid."

Unfortunately, Planeswalkers are intended to be basically the opposite of "solid." They're supposed to be memorable, swingy, dramatic, and awesome. They're supposed to create stories and define game play in unique, atypical ways. They are supposed to alter the narrative landscape of the battlefield, announcing their presence in meaningful ways. In short, they really don't want to be two-mana spells.

If you want to make your two-mana Planeswalker work, then, you have to try and figure out a way to render it relevant to game play without completely overpowering the board when it hits. You have to capture a kind of epic "feel" without inducing a prematurely epic play-pattern to go along with it.

As you can see, we tried to solve the aforementioned problems in two primary ways: (1) by rendering the card relatively narrow, so its power is constrained by the kinds of decks in which you can play it profitably; and (2) by trading the immediate benefit of a card like Incinerate for the long-term payoff of cards like Sudden Impact and Insurrection. In other words, you unlock more power the longer you can afford to wait. 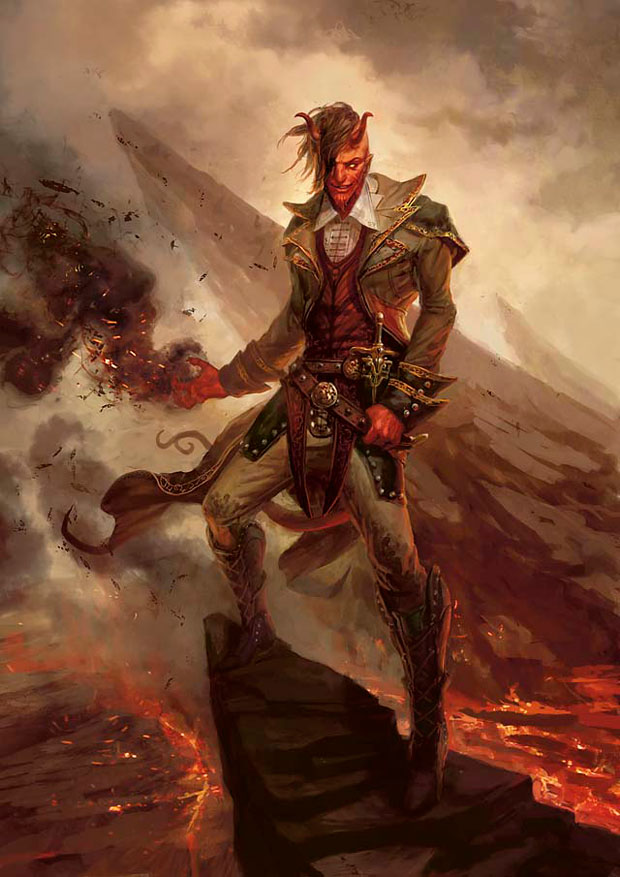 Let's take a look at each of our component parts and see what's going on with this guy:

We already talked about how we're constrained by cards as straightforward as Incinerate at the two-slot. Upping the mana requirements to

allows us to cram that much more power into the card, which is important when we're operating as close to the margins as we are with Tibalt.

Alright, you got me: 2 loyalty just isn't a whole lot. But you're ticking up to 3 almost immediately, meaning you can survive an attack from most early-drops just fine. Furthermore, you're red—roasting tiny dorks is what you do for fun in your spare time!

In all seriousness, one of the "stealth" benefits of most Planeswalkers is that because you want to get almost all of them off the board as soon as possible, loyalty functions as a kind of surrogate lifegain—and frequently will gain you more than the number written on the card, because most permanents don't deal damage in granular increments one at a time. So you can't pack a whole lot of loyalty onto the cheaper Planeswalkers, or they'll all start functioning as mini-Loxodon Hierarchs in addition to whatever other text they possess.

We've printed two three-mana Planeswalkers: Jace Beleren and Liliana of the Veil. In both cases, their "plus" ability is net neutral in terms of card advantage, but a properly constructed deck can bend the symmetry in its favor. With Tibalt, we stuck to a similar formula. At his most basic level, you only want to activate Tibalt when you feel the average power level of a card in your deck is greater than the average power level of a card in your hand, thereby "upgrading" the overall quality of your hand by a marginal amount. Still, the potential upside of such an ability is obvious: if your hand contains nothing but a single basic land, by activating Tibalt you're essentially up half a card. That's nothing to sneeze at, especially since you still have a Planeswalker sitting on the board.

Clearly, though, we're not just going to be operating at level one. Suppose your deck is full of flashback cards or for some reason or another (Unburial Rites? Past in Flames??) doesn't particularly care whether your spells are in your hand or in your graveyard. In this situation, Tibalt is basically generating a card for you every turn, producing velocity and ticking up to some of his more potent abilities, namely:

If you can activate Tibalt's second ability even once, you're clearly getting a pretty good deal. Sudden Impact, after all, costs four mana and saw a fair bit of tournament play in an era defined by card-drawing spells like Fact or Fiction and hand-swelling effects like Upheaval. Moreover, the exact decks against which this ability functions at its finest are the kinds of decks that have substantial problems removing Planeswalkers. You do not want to be a blue-black control deck full of card-drawing spells like Think Twice, Forbidden Alchemy, and Consecrated Sphinx staring down the business end of a Tibalt. To put it in perspective, Flame Rift is a Legacy staple and deals 4 damage to each player. Getting 4 out of a Tibalt is a pretty good deal, especially when you enjoy the side-benefit of forcing control decks to empty their grips. Of course, Flame Rift is only playable in a certain kind of deck, which is where the "more narrow but more powerful" aspect of Tibalt kicks in. And it's very easy to envision scenarios where you hit much harder than that—particularly if you're helping them out with... hold on a sec, I'm getting a call.

That card hasn't been spoiled yet?

Thanks. Yep. Any time.

...err, so you're absolutely not using any mechanism whatsoever to help your opponents fill up their hands. Nope. Not one. No idea what you're talking about. Where'd you get that silly idea?

Obviously, Planeswalker ultimates are designed to be massive beatings, so the above statement is a bit of a misnomer. Furthermore, if your opponents have four creatures just sitting there on the board, why in the world aren't they just attacking your Tibalt and ensuring you don't smack them upside the head for 30 damage?

It's a valid concern, but again, that's where the "powerful-but-narrow" element of a Planeswalker like this comes into play. Maybe you're playing some defense. Maybe you've cast a Fog-type effect on a critical turn. Or—far more likely—maybe you're up against some kind of Titan deck, and you've dropped this guy pretty early, and suddenly the prospect of bashing your face in with a Grave Titan looks a whole lot less appealing. Any way you look at it, it's obvious that an ultimate so powerful it's normally worth eight mana offers tremendous potential upside when it's tacked to a permanent that hits the board on the second turn of the game. And let's not even get started on the kind of havoc this guy can wreak in multiplayer... 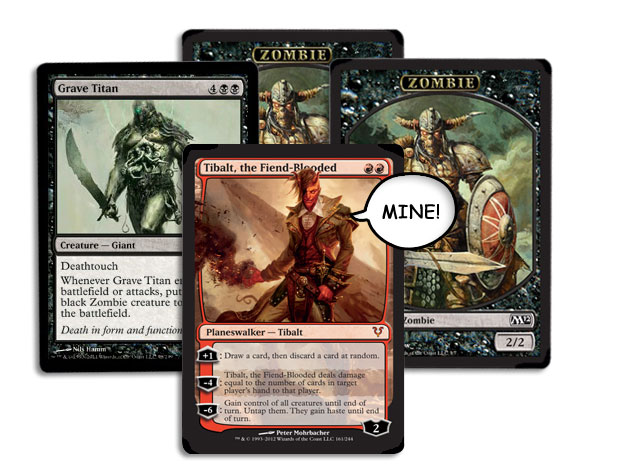 So there you have it. Making a two-mana Planeswalker was one of the most difficult challenges I've been a part of in my now three years at Wizards, but I'm pleased with what our efforts produced. Plus—I mean the guy is half devil, which is pretty sweet in and of itself.

But that's just my side of the story. How do y'all plan on using Tibalt? Let me know in the forums, on Twitter, or via the email link at the bottom of this column!

Join me next week, when I talk about being a hater.